“Manhattan apartments are piling up on the market,” says an article at Bloomberg, “and it’s getting harder to fill them.”

In fact, rental inventory hit a record high in August… 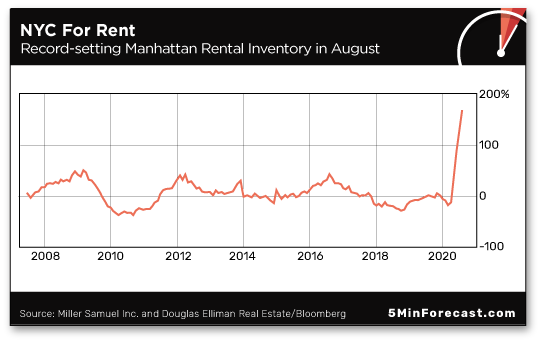 “Rental listings jumped to a record 15,025 at the end of August, more than double the inventory from a year earlier,” Bloomberg says. “Renters are finding few reasons to sign new leases in Manhattan, with Midtown offices still largely empty and public school reopenings an unresolved question.”

So landlords are having to sweeten deals, offering free months of rent and discounts on deposits; factoring in these incentives, Manhattan rents have dropped 7.7% to an average $3,161 per month.

Still seems rich to us…

Jonathan Miller — president of real estate firm Miller Samuel — concedes: “Until we see a stabilization in outbound migration or some impetus to bring people back, we’re looking at more softening rents to come.”

For more on the trials and travails of NYC in post-coronavirus America, read on…

“I cannot believe what’s happened over the past week and a half,” says iconoclast investor James Altucher regarding the article he wrote titled “New York City Is Dead Forever (Here’s Why).” An article we featured at The 5 in late August…

(Psst… as for comedian Jerry Seinfeld — of the TV “show about nothing” — he called James “some putz on Linkedin” in his piece for The New York Times… Play nice, Jerry.) 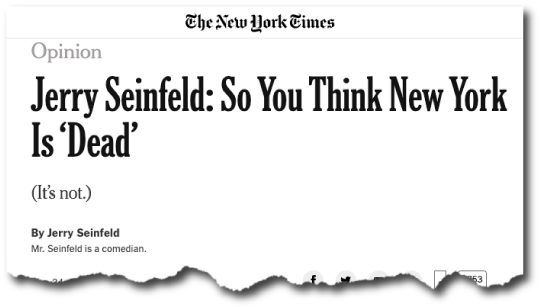 “I understand why people were upset,” James says. “They saw the problems, but they didn’t see me address solutions.” James thinks he could have been more empathetic too, trying to put himself in his readers’ shoes.

And can James ever relate… “Right before 9/11,” he says, “I had my apartment up for sale because I was going broke.” (A Manhattan apartment, we might add, just scant blocks away from the Twin Towers.)

“I was scared to death,” James continues, “and if someone had written an article… right after 9/11 [saying], ‘Hey, buddy, New York City is dead forever’… I probably would have been really upset.

“I didn’t mean for this post to be like, ‘Hey, New York City is dead. Let’s dance on the grave.’’’ Rather, James asserts: “I want New York City to get better!

“But New York City right now has an 18% unemployment rate. For some people ‘forever’ might mean two months. How are they going to survive the next two months?

“I wrote my article in a very logical, here-are-the-facts [way]… I get it, Jerry Seinfeld and a lot of other people looked at it from a very emotional point of view.

“And a lot of people mentioned — and I’ve seen it, I’ve been there — the grit of growing up around New York City, living in New York City during 9/11, living there during 2008. I get it,” James says.

“I did notice, though, over 400,000 people left New York City in March,” says James “Restaurants closed, small businesses closed, people can’t pay their rent. What are people going to do? Are the 400,000 people who left going to come back?”

To that point, James notes: “Jerry Seinfeld… said that ‘Everybody hates… remote.’

“I wish that were true,” James counters. “But that’s not… IBM did a study. They interviewed about 20,000 people. And a little more than half actually loved being remote and not having to go into the office.

But let’s say half of dispersed New Yorkers — perhaps the ones who despise the WFH lifestyle — sojourn back to the Big Apple. Will that be enough to support small businesses?

“That’s disturbing to me,” says James. “That’s a problem that needs to be addressed by words other than grit.”

“These are real issues we have to think about… and if my article got noticed because of its title, I’m really grateful it got noticed by people who can make decisions…

“So let’s think about solutions,” James adds. “A lot of these solutions are really hard…

“Restaurants have to go back to work,” he says. (At 25% capacity ain’t gonna cut it.) “[And] there have to be incentives in place for tourists to come back to New York City.

“You know, Disney owns all of 42nd Street,” says James. “Maybe as soon as tourists land on New York City soil, [Disney] offers a $100 coupon for restaurants or the theater or other tourist attractions.”

He’s just spitballing… but his heart is clearly in the right place. “We have to be creative now about what these solutions are,” James says. “The problems are real. But let’s focus now on solutions because the faster we do that, the faster ‘forever’ ends.”

“But it’s healthy action!” he emphasizes. “Yes, the Nasdaq dropped 10% in just three trading days. But we have to keep this move in perspective. Remember, the Nasdaq had gained an eye-popping 75% off its lows.

“Slipping double digits following a profit-taking pullback is far from catastrophic,” Alan says. “Despite the recent weakness in the markets, we’re still in an uptrend.

“Anyone who has tried to pick ‘the top’ over the past decade has failed,” he says. “I’m more inclined to look at the risk-reward and find opportunities after a sell-off, as opposed to selling into this corrective move.”

Or JPM might be trying to justify building its new skyscraper in Midtown Manhattan. Just sayin’…

Inflation might be starting to get a head of steam.

That’s the takeaway from the August consumer price index — up 0.4%. That means the official year-over-year inflation rate has lurched higher from its corona-panic lows — from 0.1% in May to 1.3% in August.

The big driver of the number last month? Used cars — all those city-dwellers who don’t want to jam themselves onto buses and trains anymore. (That sound you hear in the distance is the global-warming crowd, murmuring in mild panic.)

The real-world inflation rate from Shadow Government Statistics is also moving up, though not as dramatically— from 7.7% in May to 9.0% in August.

“It’s as if we squandered an opportunity to sell when our shares were valued at a much higher level,” he says. And, yes, he’s looking at you, Big Tech…

“Company executives feel the same way when their shares surge higher and then start to return back to ‘normal’ levels,” Zach says. “Only instead of regretting selling shares, these executives often regret not using the high-priced shares as buyout currency to take over another company.

“In the world of buyouts — when one company buys all the shares of another company — there are two basic currencies that can be used:

“As big popular stocks like Amazon, Alphabet and Tesla rocketed to new highs over the summer,” Zach notes, “CEOs of these companies had an opportunity to start negotiating buyout deals using their inflated stock price as buyout currency.”

But now that the tide’s shifted for Big Tech (if even temporarily), there’s a new sense of urgency…

“Now that there’s a clear risk that shares of these biggest companies could give up some of their gains,” Zach says, “the clock is ticking…

“… to use the high stock prices as a tool to buy out competitors, suppliers and other companies that can help with profit growth.

“When a buyout transaction is announced, shares of the company being bought typically surge higher,” Zach says.

“That’s because a big company like Amazon or Tesla needs to offer a price much higher than the current price of a stock being bought out. That way, the investors in this company will have an incentive to approve the deal.”

Zach says: “So buyout deals typically lead to big overnight stock gains once the announcement is made and investors realize that their shares are being bought at a higher price.

“So as we watch volatility re-enter the market and see some of the biggest tech stocks swinging back and forth, just remember that this action is likely to spur some big buyout deals.

“And those deals could lead to big profits for your retirement.” 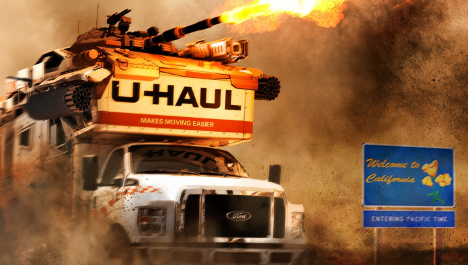 According to the Bee, the U-Haul “War Rig” is equipped with “armor plating and mounted weapons” and gets a whopping six miles to the gallon.

Oh, and it comfortably seats a typical California family… of one. Heh…

No word yet if — as is the case in NYC — customers are being price gouged to get the hell out of Cali in the “War Rig.”

Well, you know what the song says: “You can check out anytime you like… But you can never leave!”

Take care, and try to have a good weekend.