No, it’s not an Onion headline: “Delta Will Use Frequent-Flyer Program to Back $6.5 Billion in Debt,” says CNBC this morning.

“The airline plans to sell senior secured notes and enter into a new credit facility, both backed by its SkyMiles program. SkyMiles will lend the net proceeds of the bond offering to Delta, although a portion will go to a reserve account.”

That’s preposterous enough. Even more: The Street likes it. DAL shares are up more than 2% as we write.

Meanwhile, the percentage of U.S. companies that can rightly be called “zombies” is near an all-time high.

“Zombie companies” are those whose operating profits are lower than the interest payments on their debt. The Leuthold Group says among 3,000 companies it tracks in an index — a very broad cross-section of the total U.S. stock market — 15% are now in zombie territory. That figure is approaching the all-time peak set 20 years ago. 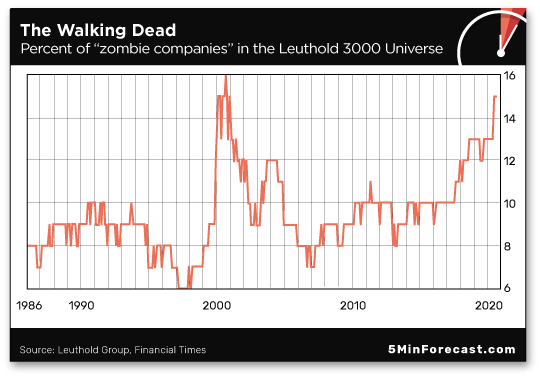 The previous decade-plus of ultralow interest rates made it easy for companies to load up on cheap debt… and when the pandemic hit, the Fed made it even easier to borrow.

“Huge market interventions from the Federal Reserve,” says the Financial Times, “dragged down corporate borrowing costs from decade highs in March to historic lows, and facilitated unprecedented debt issuance from companies desperate for cash to outlist the virus’ economic impact.”

Leuthold portfolio manager Jun Zhu is fretting: “What happens if all of a sudden capital markets dry up and they cannot refinance or pay down their debt? How will they roll it over or even afford the interest expense?”

Then again, if the Fed’s got your back no matter what…

Moving from corporate debt to government debt, we see Uncle Sam’s budget hole is even worse than advertised.

After we went to virtual press on Friday afternoon, the Treasury Department disclosed that the U.S. budget deficit for the first 11 months of fiscal 2020 totaled $3 trillion.

“The deficit from October through August is more than double the previous 11-month record of $1.37 trillion set in 2009,” says The Associated Press.

As we’re wont to point out now and then, the official deficit figures are sleight-of-hand bookkeeping — almost always understated.

The real tell is how much the national debt climbs. Remember when Bill Clinton and Newt Gingrich both took credit for “balancing the budget” in the late 1990s? Yeah, it was a big bipartisan lie; despite the official numbers, the national debt kept growing — year after year.

Like much of corporate America, Uncle Sam is now addicted to low interest rates. Thus, despite the pandemic-driven budget blowout, the federal government’s interest payments so far in fiscal 2020 are 10% less than in 2019.

No, it’s not sustainable. But by the same token, there’s no telling when the balloon goes up. Between now and then is the time to accumulate gold.

“Keep your head on a swivel — I don’t think the pullback is over just yet,” advises Greg Guenthner of our trading desk.

“Even though the averages attempted to stabilize last week, we could be in store for more selling. It might be another week or two of quick retreats and choppy action before we see a flush — then perhaps a ‘bottom’ will be in place. 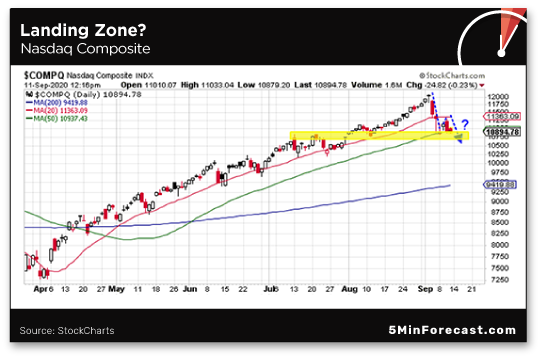 “If this move back toward 11,300 fails (which appears likely) we could see another drop toward 10,500. That’s the next level of support we should monitor for a tradable bounce.”

In the meantime, trader buzz today is all about mergers and acquisitions…

Congrats to readers of Ray Blanco’s FDA Trader, who’ve been biding their time with IMMU since January of last year. Patience pays off! (Yes, he has other plays with similar potential — see here.)

“We are one step closer to Apple-Fi reality,” he tells us, looking at Apple Inc.’s latest announcements.

All summer, Ray has been making the case here that Apple is keen to move into wireless access using satellites rather than conventional cell towers… and an announcement might well come sometime this month.

Well, tomorrow, Apple is holding its usual September dog-and-pony show — but with a twist. “According to Bloomberg, tomorrow’s event will only cover the iPad and iWatch… leaving the new iPhone 12 for October. It has also been reported recently that Apple is gearing up to start production for their first 5G iPhones later this month.”

Whatever the case, “Apple-Fi is coming,’ Ray asserts, “sooner than we think.

“Remember, back in December, Bloomberg reported that Apple has a five-year goal to make your iPhone work anywhere in the world via satellite. According to the article, Apple CEO Tim Cook’s interest in the project indicates ‘it’s a company priority.’

“Also last year Apple quietly added support for what’s known as Citizens Broadband Radio Service (CBRS). The CBRS standard allows users to create the equivalent of a private LTE cellphone network. Wireless telecoms could also use it as part of 5G. CBRS is billed as faster than Wi-Fi, a fast frequency capable of enabling broadband-like speeds between 100Mbps–1Gbps.”

Here’s the intriguing part: The slice of radio spectrum allocated by the feds to CBRS “is already used in many instances for ground-to-space satellite communications!”

From the Daily Mail: “High-end athletic apparel maker Lululemon has come under fire for inviting followers on Twitter to a workshop teaching people how to 'resist capitalism'… 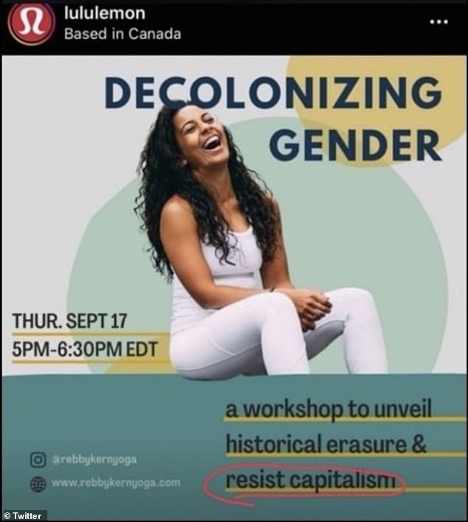 “The irony of the company, which is worth more than $45 billion, hosting such an event was not lost on social media users who were quick to mock the clothing firm for such double standards.”

Hmmm… LULU shares have tumbled hard since the controversy erupted last Wednesday… from nearly $350 to under $313 this morning. Granted, that might have more to do with a disappointing earnings forecast…

“Woodward probably doesn't know what to believe when it comes out of Trump's mouth,” a reader writes — clearly more sympathetic to Bob Woodward than your editor was last week.

“How many years of lies does Trump have to tell before you stop thinking he is an honest person?”

Complains another, more directly: “You are destroying this country with your b***s***. I am tired of supposed financial rags supporting the actions of this president.”

And along similar lines… “I read your service for stock and other financial information. NOT for your politics. Please stop your editorializing and stick to your financial advice! Thank you.”

The 5: The implication of the first and second readers is that if we’re taking Woodward to task, it’s because we’re in the tank for Trump.

“A pox on all of ‘em,” we said here less than two weeks ago. This is a strictly antipartisan publication, stubbornly resistant to the kabuki theater of politics. 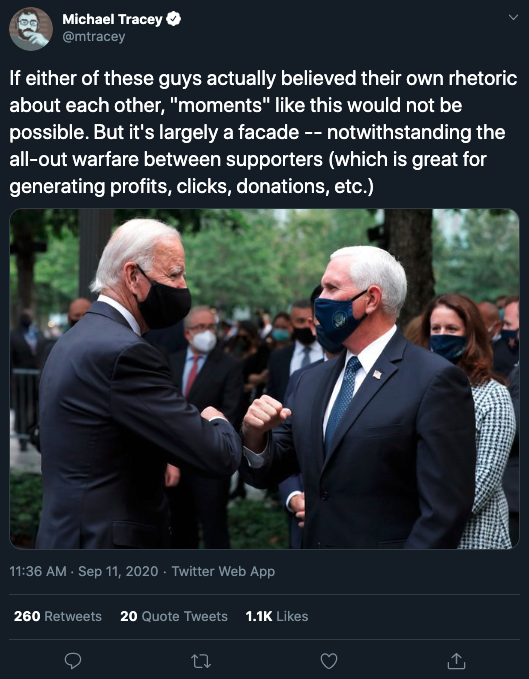 To address the third reader: If you were paying attention, you noticed we took on the topic last Thursday in part to spotlight an investing strategy — following the money trail of high-profile journalists and other connected power elites who might be colluding with finance types on lucrative trades in the markets.

[About that strategy: As it happens, we’re still under our subscriber cap, so we’ll be keeping The Profit Wire open to new subscribers a little while longer. We took 50% gains just this morning playing the luxury-goods maker Tapestry. Access here.]

“Mr. Gonigam faults the media for overdramatic reporting and then proceeds to do the same,” reads a more substantive critique.

“He opens his article with a claim that the media did not fear outbreaks at protests because the protest was for the ‘right’ cause. This is incorrect. The media did warn of this possibility. The data that emerged one–two weeks afterward, however, proved that this fear was misplaced, as multiple sources found no increase in viral outbreaks in the 300 cities that had large protests (e.g., see National Bureau of Economic Research).

“Mr. Gonigam goes on to accuse Bob Woodward of opportunistic journalism because the author makes money inflaming the masses, but doesn't own up to the fact that he's doing the same thing to us readers. It's this type of hypocrisy that makes journalists and politicians less reliable as sources of information. Unfortunately, the editor has become one of those. Please, Mr. Gonigam, you can do better.”

The 5: We’re familiar with the numbers. But at the time the protests broke out in early June, we didn’t know those numbers. And we showed how the media went out of its way to spotlight “woke” public health experts who believed, as one said, “The public health risks of not protesting to demand an end to systemic racism greatly exceed the harms of the virus.”

Only a few weeks later did we learn some of those same experts were having second thoughts. As one fessed up to The New York Times: “I certainly condemned the anti-lockdown protests at the time, and I’m not condemning the [anti-racism] protests now, and I struggle with that.”

And there’s a broader point about how squishy “the science” is — which of course hasn’t stopped politicians and bureaucrats from upending the lives of hundreds of millions.

As Peter Van Buren writes at The American Conservative, “In New York we are told it will be the death of us to reopen restaurants for a quick meal, but from day one of the virus we have been welcome to sit in poorly ventilated subway cars. We can’t have more than a handful of customers inside a store, but we can spend six hours inside an airplane cabin. Ten people gathered for a party is a death trap but 300 massed for a BLM protest isn’t.”

“Dave, haven't you gotten past Watergate?

“In 2005, Mark Felt was revealed as source ‘Deep Throat.’ To anyone capable of independent thought, that turns the story completely upside down: Instead of a low-level employee doing his civic duty exposing wrongdoing, it was a disgruntled (passed-over) No. 3 FBI man using the press for revenge.

“And it revealed the FBI as bugging and digesting White House conversations. Remind me, what is the definition of a police state?

“Woodward and Bernstein might be forgiven as inexperienced cub reporters, but their bosses Ben Bradlee and Katharine Graham knew they were being used, and wanted it. Woodward's lack of contrition makes culpability more likely.

The 5: We actually scratched out a paragraph or two about that before deciding to chop it. There’s only so much we can fit within the confines of our 5 Mins!

P.S. Oh, and you can go back even further for evidence of the deep state undermining the elected executive — all the way back to Truman, as we chronicled last year.