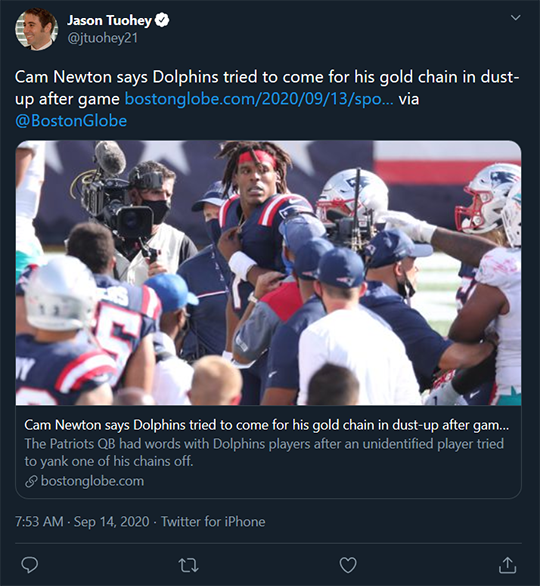 According to USA Today: “Newton wrote that the Dolphins players tried to snatch his chain [after] the game.”

Adding insult to injury, “the Dolphins’ Shaq Lawson and Raekwon Davis both commented on the post to mock Newton’s chain. Lawson called it ‘weak,’ and Davis called it ‘fake.’”

While Newton’s contract with the Pats is kinda hush-hush — heh… “the Patriot’s way” — he’ll still earn anywhere from $43,750 all the way up to $3.75 million per game in incentives, according to Sporting News.

All to say, we don’t think Cam’s chain is “weak” or “fake”… ain’t nothing like the real thing! A sentiment echoed by investors seeking a safe haven from corona-fallout…

And investors are still queueing up to buy physical gold, notes Dr. Tatiana Bailey, econ professor at University of Colorado. The pandemic, you say? Just one reason gold’s revved up in 2020.

“We still have so many economic pressures,” Dr. Bailey says. “We have millions of people [out of] work, we still have emerging hot spots for COVID-19, we have limited economic activity…

Back in March, we mentioned a major Canadian gold dealer said it was sold out of nearly all standard one-ounce gold coins, including U.S. Mint-issued American Eagles and Buffaloes, Royal Canadian Maple Leafs, Great British Britannias and Kangaroos issued by Australia.

A hazard Byron noticed: “Absent an assured supply of refined metal,” he said, “the question is if there will be gold enough in New York for delivery in futures contracts on the Commodity Exchange, better known as Comex.

“Futures trading is a complicated business,” Byron says. “Technically, traders buy and sell contracts that represent physical commodities. But much of it is just what’s called ‘paper gold.’

“Most gold contracts never really settle,” he notes, “with [no] real metal changing hands.” Meaning, it’s a trade in name only. “Sometimes the contracts do settle, however, and for that you need real gold.”

Gundlach questioned: “What happens if physical gold is in short supply and everyone wants to take delivery of their paper gold? Can’t squeeze blood out of a stone,” he concluded.

Another risk? Something called “unallocated” gold…

Here’s how it works: “When most large gold buyers want to buy physical gold, they’ll call a major bank or a large gold dealer.

“Yet the contract says they own gold on an ‘unallocated’ basis. That means there are no gold bars that have their name on them.

“If every holder of unallocated gold showed up all at once and demanded their gold, there wouldn’t be nearly enough to go around,” says Jim. “It’s paper gold.”

[Ed. note: Hard Assets Alliance isn’t in the paper gold business… And because of its vast network of wholesalers, HAA is a model of liquidity, providing guaranteed settlement with all accounts pre-funded.

Plus, it only takes minutes to set up an account to buy and store allocated gold, silver, platinum and palladium in a secure, private vault. Explore Hard Assets Alliance’s easy-to-navigate website today, or if you prefer, you can call their toll-free phone number.

It’s worth mentioning that Agora Financial purchased a stake in Hard Assets Alliance, so we get a cut of the fees. But we wouldn’t have bothered investing if we weren’t convinced HAA serves everyday investors looking for exposure to precious metals. Again, here’s the link.]

And at the time of writing, Apple’s streaming its annual promotional event from Cupertino HQ. Certainly, we’ll have more to say on that score tomorrow…

LVMH (Moët Hennessy Louis Vuitton) — which calls itself a “world leader in high-quality goods” — is scrapping plans for its $16 billion takeover of Tiffany & Co.

“LVMH said that its board received a letter from the French foreign ministry asking it to delay the acquisition to beyond January 2021 due to the threat of additional U.S. tariffs,” says Frank Holmes at Kitco. “At the same time, LVMH said Tiffany asked to extend the deadline to Dec. 31 from the original date of Nov. 24.

“Now Tiffany is suing to force the deal through – which was set to be the largest transaction ever in the luxury sector.”

Turning to news that actually concerns 99% of us…

The major economic numbers today? Mostly disappointing… Industrial production grew just 0.4% in August, according to the Federal Reserve, with manufacturing up a miniscule 1.0%.

Then there’s the capacity-utilization number: 71.4% of the nation’s industrial capacity was in use during August, a minor “beat” over economists’ expectations.

All told, it’s going to be a long road to recovery.

“We could see a U.S. pot boom take shape sooner than anyone expects,” says pot stock authority Ray Blanco, “with an election looming in just a couple of months.”

And Ray steps out on a limb, saying: “Whichever party wins the White House later this year, cannabis wins too.”

Meaning while Biden’s talked about “decriminalizing” marijuana most recently, running mate and U.S. senator Kamala Harris introduced a bill in 2019 to deschedule and legalize marijuana at the federal level.

On the flip side, “Trump has already made comments that point to supporting legalization,” says Ray, “and making that move before November could keep it from becoming a ballot initiative in states where it would lure left-leaning voters to the polls.”

What’s more: “[Trump] coming out in favor of cannabis becomes an easy pro-business move that throws a curveball at the Democrats.”

And now more than ever, which state will be able to resist that sweet tax revenue?

“Even politicians who’ve opposed legalizing pot in the past will have a hard time justifying turning down billions in tax revenues at the same time they need to weigh cutting constituent services,” Ray notes. “That’s a recipe for a voter revolt.

“In New York,” for example, “where the economic impact of COVID-19 has been particularly rough, legalized cannabis is projected to bring in as much as a billion dollars a year in taxes,” Ray says. And taking a look at marijuana-legal California, the state “racked up $348 million in cannabis sales in July.” Just July…

“I’ve said this before,” Ray says, “but at a state level, it all comes back to taxes.

“If you want to predict when cannabis is likely to become fully legal in the U.S., all you have to do is follow the money,” he says.

A Canadian diamond — more than four times larger than the Hope Diamond — is up for auction this week.

“Mined at DeBeers' now-closed Victor Mine in 2018,” the CBC reports, “the diamond, about the size of a small egg, was cut from a larger 271-carat rough diamond, and then cut and polished for more than a year.” 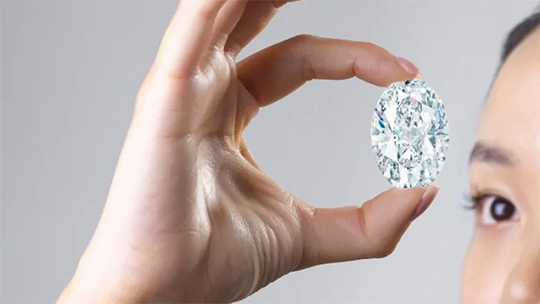 The diamond is spectacularly rare and “considered flawless, a characterization that British auction house Sotheby's says is bestowed on only 0.5% of all mined diamonds.”

Interested? “Sotheby's started the bidding for the stone online this week, and the process will finish off with an in-person auction in Hong Kong on Oct. 5.”

The diamond is expected to fetch between $12 and $30 million. Heh… think of it as an investment…

“Why do you waste more than two minutes on someone’s perception that New York is dead or dying or whatever the problem is?” says a reader in response to Friday’s missive.

“Get on with real stuff, not some nincompoop’s opinion about a city. Your colors and political bias are occupying too much of a well-regarded newsletter.

“Or alternatively, advise the reader that the following two minutes are nonsense political opinions so we real people can immediately scroll down to the good stuff that you discuss.

One of the reasons we put NYC under the microscope is what’s happening in major U.S. cities — including NYC, SF and LA — has enormous implications for the rest of the country. Even for “real people” like our cranky reader and me. (Regardless of political affiliation, I might add.)

A sneak peek at what might be coming to a Main Street near you? According to a letter composed by NYC business leaders and sent to City Hall: “unprecedented numbers… are unemployed, facing homelessness or otherwise at risk.”

The letter continues: “There is widespread anxiety over public safety, cleanliness and other quality-of-life issues that are contributing to deteriorating conditions in commercial districts and neighborhoods.”

Having spent a portion of my youth living in Manhattan during the late 1970s, you want no part of this…

P.S. Think of physical precious metals as a barrier between your wealth and economic turbulence…

Learn how — with a single click — you can buy and store allocated gold… silver… platinum… and palladium in your choice of six audited vaults worldwide. Follow this link to set up an account.

Again, we note: Agora Financial purchased a stake in the Hard Assets Alliance, so yes, we’ll get a cut of the fees (again, among the industry’s lowest). But we wouldn’t have made the investment if we weren’t thoroughly impressed by what Hard Assets Alliance does for everyday folks who want exposure to precious metals. One more time, here’s the link.