More money-laundering news is breaking today, but this time it involves gold… and some of the largest corporations in the world.

We reported Tuesday on heavyweight banks — including Deutsche Bank and JPMorgan — that were implicated in money laundering. We’re talking billions of dishonest dollars.

Here’s how the scheme worked: “Criminals anywhere in the world could use drug money or other unlawfully obtained cash to buy scrap gold such as second-hand jewelry and bring it to Kaloti. In exchange for the gold,” says BBC, “Kaloti would offer bulk cash or send a wire transfer to them.”

The DEA passed on its findings, urging the U.S. Treasury to designate Kaloti a “primary money laundering concern” by virtue of the Patriot Act, which would flag Kaloti as a high-risk operation.

Although investigation “Honey Badger” wrapped in 2014, the Treasury Department declined to pursue Kaloti in the interest of diplomatic relations with the United Arab Emirates. 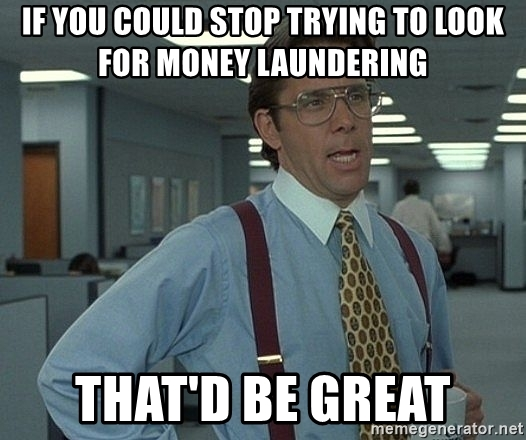 Said the Treasury Dept. to the DEA…

"We put a tremendous amount of work and effort over three years into the case,” an anonymous DEA agent tells the BBC. "We were very confident we had more than enough for them to be designated.

Also pissed this morning? Some colossal U.S. companies — including Apple, GM and Amazon — that have used Kaloti as a gold supplier in the past.

Meanwhile, Kaloti vociferously denies any wrongdoing… while Apple and GM swear up and down there’s no ill-gotten gold in your iPhone or catalytic converter.

Interesting to say the least…

For more on the subject of gold, we turn to friend of The 5 Egon von Greyerz — founder and managing partner at Zurich-based Matterhorn Asset Management.

“Even though manipulated,” Egon says, “gold still reveals the deceitful actions of governments and central banks.”

If you’ve read The 5 for any length of time, you know that the manipulated gold market is one of our running themes. So riffing on the same motif, Egon says the gold story is perhaps the best indicator of “the fall of fiat in this century.

“The fall of fiat money started in earnest in 1971,” he continues, “and since then [some] currencies have lost 97–99% of their value.” Of course, 1971 is significant because that’s the year the gold standard was bulldozed courtesy of Tricky Dick… 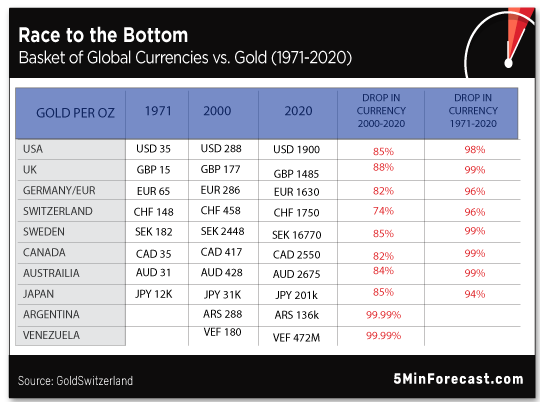 “As the table shows,” says Egon, “in this century, most currencies have lost more than 80% [against the price of gold].” With some — Argentina's peso and Venezuela’s bolivar — essentially not worth the paper they’re printed on.

Concerning the USD: “The road to perdition for the U.S. really started in 1913 with the creation of the Federal Reserve – a private bank set up for the benefit of private bankers under the disguise of a national bank.

“The Fed never had the intention of keeping the money supply and the debt under control. Instead their private agenda was always to create as much money as possible for their own benefit.”

In terms of debt, Egon notes: “Except for… four years, the U.S. has lived above its means for 90 years.” Incidentally, that includes the Clinton years. “Very few people are aware that during the years… the Clinton administration reported major surpluses, the actual federal debt increased.

“So fake surpluses were created above the line and the actual deficits below the line were never reported.” Slick Willy…

“Not only were there no surpluses in the final Clinton years,” says Egon, “but the pipe dream of eliminating the debt didn’t just go up in smoke, but caught fire. Clinton exited with a debt of $5.7 trillion.”

A pittance compared with the near $26.8 trillion national debt today…

“Of course the U.S. could… survive for yet a few years by massive money printing, bigger deficits and exponentially higher debt,” Egon says. “But the real problem will be the dollar…

“The petrodollar and a strong military has so far prevented the dollar from total destruction in the last 50 years.” As for the petrodollar, Russia, China and Iran are in league to destroy U.S. hegemony… That is, if the EV revolution doesn’t destroy the petrodollar first.

Egon says: “Still a 98% loss of value since 1971 is as near annihilation as you can get. And the dollar has now started its final journey to ZERO.”

Egon says what’s on everyone’s mind: We “are now smelling inflation and must therefore hedge against this,” he says. “Gold stands as the guardian…

“Gold is not just an investment but it is also the ultimate form of wealth preservation,” Egon concludes. “This is why it should not be held in paper form but in physical gold held outside a precarious financial system.”

[Ed. note: Now you can accumulate precious metals with automated monthly investments into real, physical bullion. With Hard Assets Alliance MetalStream™, you save in gold and silver over time and get all the benefits of price averaging, without sacrificing the advantages of owning whole coins and bars.

Setup is incredibly simple. Just pick an amount to invest, select eligible gold or silver products and connect to your bank for funding (or pre-fund an account balance). Hard Assets Alliance MetalStream™ does the rest, making regular monthly investments on your behalf. As you accumulate enough for a full coin/bar, they’ll automatically move it into the vault for you at no additional charge.

We’d be remiss if we didn’t mention our firm purchased a stake in Hard Assets Alliance, so we get a cut of the fees. But we wouldn’t have bothered investing if we weren’t satisfied HAA serves everyday investors looking to hedge their wealth. Again, here’s the link.]

From a tight housing market to a softening one…

Stripe will pay workers $20,000 to vacate expensive cities in favor of low-rent locales. The catch? “Workers who take up the offer will have to take a 10% cut to their compensation,” according to an article at Forbes.

“In light of the challenging economy and uncertainty about the future,” the article says, “executives know that they have to worry about managing their corporate finances. Maintaining large office spaces in cities, such as New York and San Francisco, is extremely expensive and the taxes are astronomical.

“Having people work from their own homes or in lower-cost cities is an attractive option for the chief financial officers to shave off large expenditures and save money.”

And if companies can slash salaries, all the better!

Fintech’s not alone: Facebook for example, is allowing employees to continue remote work indefinitely (or ad nauseam, depending on your perspective) with an irritating caveat.

CEO Mark Zuckerberg said, “We’re going to be the most forward-leaning company on remote work at our scale.” Rah-rah… right?

“Employees will have to tell their bosses if they move to a different location,” Forbes says.

“Zuckerberg forewarned his personnel, saying those who flee to lower-cost cities ‘may have their compensation adjusted based on their new locations.’”

“We’ll adjust salary to your location at that point,” Zuck said. “There’ll be severe ramifications for people who are not honest about this.”

“Apple gave us a deeper glimpse of where it wants to take its business,” says tech investor Ray Blanco, with his take on the company’s annual event last week.

“As usual, the tech giant released new versions of its popular devices at its yearly fall event,” Ray says. “There’s a new iPad Air featuring an edge-to-edge screen with Apple’s new, powerful A14 processor that promises to be 40% faster than the previous version.

“Apple also released a new version of Apple Watch. Version six of the company’s wearable computer has a great new sensor: It can measure blood oxygen.

“One device was notable with its absence, however: the iPhone,” Ray notes. More on that below…

“But what caught my attention weren’t these new Apple gadgets,” Ray says. “It was services.

“But what service could possibly be bigger than wireless, a $280 billion market in the U.S. alone?” Ray asks. “Not only would offering Apple-Fi — wireless internet from space — be a huge potential market for Apple, it would help sell millions of new devices too.”

To that point: “Apple is expected to have an iPhone-specific event in the next few weeks,” Ray says, “so stay tuned.”

Apropos of millennials still dependent on Mom and Dad: “I have two stepdaughters who live in my rental house… for FREE. It's all I can do to get them to pay the electric bill.

“If it were up to me, they'd have been paying rent for over a year. Alas, my wife says they need our help.

“I say they are just taking advantage of my good nature.”

The 5: How would you feel about a quiet family of four taking up residence, sir? Under the same rental agreement as your stepdaughters, of course…

P.S. “Unfortunately, I missed Mr. Blanco’s presentation about the Elon Musk’s Battery Day event,” a reader writes. “I had trouble with my internet yesterday so I didn’t learn about the presentation until today.

“I am very interested to learn more. Please help if you can.”

The 5: We learn today that access to Ray’s presentation is closed for now… but we’ll keep an ear to ground for when access opens up again.

In the meantime, Ray believes this ultra-secretive company is on the cusp of another breakthrough, something Ray expects will change Big Tech, the markets — even how we shop, communicate and travel — forever.