“In today’s crazy market, one of the most well-respected retirement strategies is now irrelevant,” says our wealth and income strategist Zach Scheidt.

Yep, the long-held belief the 60/40 ratio would be the golden ticket to retirement is on the rocks in 2020…

“If you’re not already familiar,” Zach says, “this means you put 60% of your retirement wealth into shares of stocks and the other 40% into bonds. Historically, this has worked well to balance risk and stability.

“In the past, bonds traded with relatively attractive yields, giving retirees guaranteed income in both good times and bad,” Zach continues. “During periods when the market pulled back, income from the wealth invested in bonds helped to offset losses in stocks.

“So the 60/40 rule led to investment gains on the wealth invested in bonds… which is why investors have stuck with this ratio for so long.

“But when you fast-forward to today,” Zach says, “with interest rates now at historic lows, bonds simply don’t offer enough income to be attractive.”

Exhibit A? The 10-year Treasury offers a yield around 0.7% per year until its maturity date. “That’s below the rate of inflation,” Zach says, “which means you’re essentially guaranteed to lose value for as long as you hold the bonds.”

About as appealing, then, as a Mason jar or mattress… 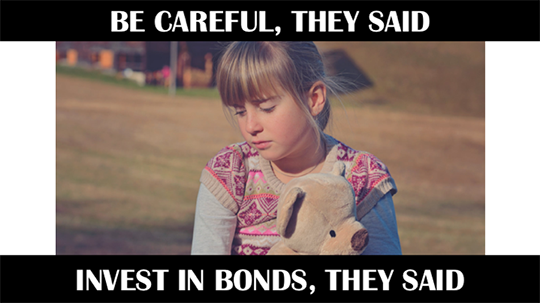 “Bottom line: Following the 60/40 rule no longer gives you stability. It actually increases your risk!”

That’s why Zach says: “I recommend investing up to 60% of your wealth into positions that will generate cash for your retirement expenses.”

Because “income is an extremely important part of your retirement planning,” Zach recommends retooling your portfolio. “For example,” he says, “shares of many blue chip dividend stocks will pay you much more income today [than bonds]… with plenty of potential for your wealth and income to grow over time.”

Take Verizon Communications Inc. (VZ), for instance, which “currently pays a dividend of $2.51 per share. Compared with the current stock price near $59.25, the dividend payment gives you a yield of 4.2%,” says Zach. Not to put too fine a point on it, but that yield blows traditional bonds away.

“The best part about investing in an income play like VZ is that the price of the stock can trade higher over time as the company’s profits grow,” says Zach. “And VZ has a history of increasing its dividend over time. So if you continue to hold your shares, your income will naturally grow.

“Once you have 60% of your retirement invested in these income plays,” Zach continues, “you can use a smaller portion of your wealth for speculative plays that can lead to bigger home run returns that will boost your wealth.”

Perhaps not as much as 40%… but that’s entirely up to you. “Using a smaller portion of your wealth to invest aggressively can pay off over time,” Zach notes.

“Investing a small percentage of your wealth into a new buyout play, a stock with revolutionary technology or an option contract on a fast-moving opportunity can hand you triple-digit gains in a short amount of time.

“And with those gains in hand,” Zach says, “you can reinvest some of your profits into the income-generating portion of your retirement, giving you even more cash to enjoy during your retirement.”

Ultimately, “Do what makes sense for your retirement,” says Zach. “You can adjust the 60/40 ratio to best meet your retirement needs. Some retirees may want to allocate 70–80% to income plays, while others may lean toward more risk and allocating more to speculative growth opportunities.”

Zach’s final word? “Make sure to avoid the traditional 60/40 strategy rule that’s putting so many retirees at risk.”

While we’re on the subject, if you’re in the market for new growth opportunities — including exclusive buyout plays — take advantage of this $611.44 credit toward Zach’s premium research that’s available on a first-come, first-served basis.

Fed chair Jay Powell’s a real Debbie Downer… In terms of the market today, Powell’s comments at the National Association for Business Economics have been a real wet blanket, smothering Monday’s market rally.

Essentially, Powell urged Congress to intervene with more stimulus, saying legislators simply cannot do too much… Hand to God.

“The risks of overdoing it seem, for now, to be smaller,” Powell said. “Even if policy actions ultimately prove to be greater than needed, they will not go to waste. The recovery will be stronger and move faster if monetary policy and fiscal policy continue to work side by side to provide support to the economy until it is clearly out of the woods.”

In our opinion, Powell’s worry was palpable as he committed — once again — to rock-bottom interest rates and the Fed’s new “flexible” inflation target.

“Since the calendar flipped to January,” says our tech investor Ray Blanco, “shares of Tesla are up an astounding 417%! Now Tesla ranks as one of the top-10 largest publicly traded U.S. stocks by market capitalization.

“While I think Tesla's a fantastic company, the price tag on Tesla's shares is hard to justify right now,” Ray says. “But sky-high or not, I think [TSLA] could actually charge even higher thanks to a major catalyst that few investors are paying attention to.”

The story starts in July when the company posted its fourth-straight quarterly earnings that showed Tesla turning a profit and “making the company eligible for inclusion in the S&P 500 Index.”

Ray says: “That's a bigger deal than it may seem…

“At current prices, Tesla would make up more than 1% of the S&P 500 if it were added today.

“That makes it one of the largest names in the index,” Ray says. “It's virtually unprecedented to have a new addition to the S&P 500 that large.

“The best recent precedent we have is Warren Buffett’s Berkshire Hathaway, which got added to the index back in 2010 after a split as part of its deal to buy the BNSF Railway. Berkshire's weight in the index was nearly the same as Tesla's would be now.

“Berkshire is about as calm and conservative as investments get,” Ray notes. “But even old Berkshire’s impact from being included in the S&P was massive — it outperformed the S&P 500 by 18% in the month and a half that followed its inclusion in the index.

“It’s not out of the question to imagine a pretty wild move higher if Tesla’s included in the S&P,” says Ray. “That [would be] a recipe for another huge momentum move in Tesla this year.”

“Most folks think it’s because of Tesla’s questionable earnings quality — namely, whether or not they can continue to earn profits or whether Tesla’s recent profitability is transitory.

“The S&P committee knows how unprecedented adding a stock of Tesla’s size would be — and they’re probably hoping they can wait for it to correct before they add it.

“That’s a risky proposition, though,” Ray says. “After all, they’re also risking it going up and becoming a bigger chunk of the index when it gets added.”

Ray continues: “I think their hand will be forced. The S&P 500 [wouldn’t be doing] a very good job representing the broad market if it excludes one of the 10 largest stocks in the country.

“Most likely, they’re pushed to add Tesla to the S&P between now and the end of the year,” Ray concludes. “And when they do, it should unleash a flurry of buying that nobody is talking about.”

[From the mailbag]: “The only real democracy in the world is Switzerland,” says a French reader — who has family ties in the neutrality-loving European enclave — referencing The 5’s issue Diagnosis: Madness.

“Thanks to Switzerland’s system of ‘direct democracy’, citizens can initiate a popular referendum to put a limit to politicians' natural tendency to overspend. This has made Switzerland a very prosperous country.

“Some U.S. states (California, for example) that authorize popular referendums actually took Switzerland as a model (but unfortunately, they didn't go as far as the Swiss).

“So-called ‘representative democracies’ are just permanent scams of the oligarchy (either in the U.S., in France or wherever). It just allows the ruling elite to pretend it represents the people.”

The 5: Heh… now we think we must include a reader’s vivid takedown of last week’s debate…

“Did anyone else think the presidential debate resembled a wrestling hype piece for the main event?

“I was really surprised Kamala Harris didn’t pop out from under the stage and smash Trump over the head with a metal folding chair.”

The 5: Thanks, reader… Now we have a mental image to erase: Trump and Biden in wrestling singlets.

“An excellent letter [Monday], Emily. I begin by stating I love The Princess Bride almost as much as I love Wallace Shawn. And I love gold too.

“I first bought precious metals in 1980. Also, I have owned many, many mining stocks. I have been waiting 40 years for the numerous predictions of hyperinflation and currency collapse to arrive. History teaches us that it will come, but perhaps not in my lifetime.

“And that's essentially the problem with precious metals. Or perhaps I should say that's the problem with fiat currencies. It can take decades, perhaps centuries, before they show their true value. Most of us do not live long enough to see fiat money live down to our expectations. In hindsight, I wish I had invested in S&P index funds.

“I have owned TIPS over the years too. I sold them when a) inflation never became the issue predicted and b) I realized that the FRB was measuring inflation with a rubber ruler. It is common knowledge they have changed the inflation formula over the years. Why should I believe that I will be compensated accurately for TIPS investments?

“Keep up the excellent and humorous writing. I always look forward to The 5!”

The 5: Many thanks, reader! We’re delighted you enjoy your daily dose of The 5…

And it’s not inconceivable that precious metals will be useful in your lifetime too. As a hedge against the Brute Squad, a land war in Asia and much more. As for your love of gold, sir, remember: Death cannot stop true love.

We’ll dispense with all Princess Bride references (for now)…

P.S. Don’t neglect to claim your $611.44 credit toward Zach Scheidt’s premium service Buyout Millionaires Club. Zach and his team scope out the most compelling buyout targets… before a deal is announced… locking in lightning-fast paydays for subscribers.