If you were with us on Wednesday, you’ll recall Dow futures fell 300 points “after” the even-more-worthless-than-usual presidential debate.

The implied cause-and-effect relationship was, uhh, suspect. Dow futures can take a 300-point spill for any number of reasons, and sometimes no reason at all.

But in the present instance, we’ll buy the causation thesis. Anything that puts U.S. military forces worldwide on “heightened alert” suggests at least the potential for turmoil of some sort.

The reactions have been oh-so predictable. Liberals with no life luxuriating in schadenfreude. Conservatives with no life verklempt about their savior.

As usual, we try to stand above the fray with a longer view — colored, of course, by our impertinent, pox-on-all-of-’em outlook. Thus, the following timely observation…

The presidency is entirely too powerful for anyone’s own good.

Imagine if the president of Switzerland tested positive for the corona-crud. The Swiss stock market probably wouldn’t miss a beat. And Switzerland’s vaunted citizen militia — focused on honest-to-God defense instead of “power projection” — wouldn’t go on “heightened alert.”

That’s because the Swiss presidency just isn’t that important — even in Switzerland. Presidents serve on a yearly rotation — not unlike the United States under the Articles of Confederation.

Exactly when the American president became an elected monarch we’re not altogether sure — maybe with FDR. But even within the span of your editor’s lifetime, the ongoing transformation has been stunning.

In 1970, Richard Nixon apologized for blurting out one day that Charles Manson was guilty before the trial was finished. Nixon realized the line he’d crossed. “The last thing I would do is prejudice the legal rights of any person, in any circumstances.”

But by the 1990s, Clinton aide Paul Begala was waxing enthusiastic about the awesome powers of executive orders: “Stroke of the pen, law of the land. Kinda cool.”

The Sept. 11 attacks ushered in the whacked-out “unitary executive theory,” promulgated by Dick Cheney’s evil-genius aide David Addington — in which basically every aspect of human endeavor is subject to the president’s Article II war powers. And since Washington is always at war somewhere…

Nowadays, even as president-elect in late 2016, before taking office, Donald Trump could move a company’s share price with a tweet. Madness.

Alas, a curbing of presidential power isn’t on the ballot next month. “If voting made a difference, they wouldn’t let us do it” is the line attributed to everyone from Mark Twain to Emma Goldman.

➢ Good thing The 5 doesn’t have a Twitter account. We’d surely be banned for “undermining public confidence in an election or other civic process.” Heh…

When it comes to “market-moving news,” the president’s diagnosis relegates the monthly job numbers to the back seat — and as it turns out, we’ve reached a milestone.

The Bureau of Labor Statistics conjured 661,000 new (or revived) jobs for September — less than expected.

On the big chart from Calculated Risk depicting the job losses and recoveries from every postwar recession, the good news is that the economy has now recovered just over half the jobs lost in March and April. That’s the milestone.

The bad news — the millstone, as it were — is we’re still worse off than we were at the nadir of the Great Recession’s job losses… 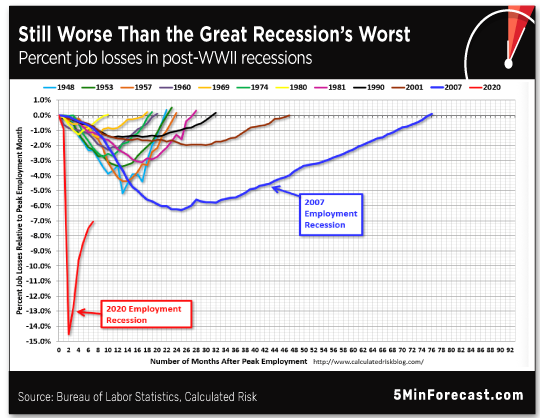 Mentally extending that red line into the future, we probably won’t be back to breakeven for another two years or so.

As the day wears on, that 500-point Dow futures loss has been pared to a 250-point loss in the Dow itself.

Crude is taking a beating as the week winds down, a barrel of West Texas Intermediate now $37.58, roughly a three-week low.

Copper — often considered a good barometer of global economic activity — has tumbled the last couple of weeks from $3.10 a pound to as low as $2.87 yesterday. That’s further reinforcement of the “slowing recovery” theme… although today it’s staging a modest comeback.

Whaddya know? Playboy is resorting to a SPAC as it plots its return to the stock market.

The late Hugh Hefner took Playboy private in 2011, long after the company’s trademark magazine had lost its cachet and people didn’t even read it for the articles.

Hef’s family unloaded its 35% stake in 2018, not long after his death at age 91. The print magazine was folded for good earlier this year. Nowadays the company is basically a licensing outfit for the bunny logo — found on everything from lingerie to grooming products to digital gaming. 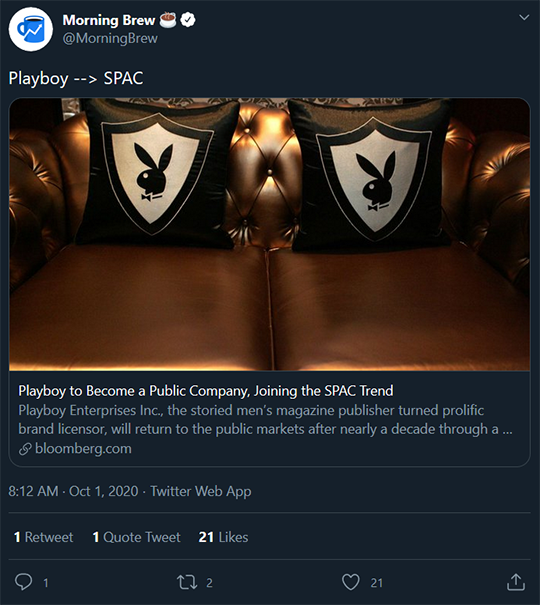 “The intention was always to return the company to public markets,” says present-day CEO Ben Kohn.

Doing so via a special purpose acquisition company — a phenomenon we spelled out in depth yesterday — isn’t altogether surprising. Playboy will merge with Mountain Crest Acquisition Corp. The deal values Playboy at $381 million — on the low end of “small cap” territory. When the deal’s done next year, the current owners will retain a 66% stake.

In perhaps the least surprising development of 2020, Moody’s has downgraded the credit ratings of both New York City and New York state.

They’re both still investment grade, but Moody’s rates the outlook for the city “negative” — subject to future downgrades.

But get this: Going into the pandemic and lockdowns, nine other states were in even worse financial condition.

The outfit Truth in Accounting is just out with its Financial State of the States report. It finds only 11 states had enough money to pay their bills at the end of fiscal year 2019.

Bad as New York might be, ranked No. 41 out of 50, the states even worse off are Vermont, California, Kentucky, Delaware, Massachusetts, Hawaii, Connecticut, Illinois… with New Jersey bringing up the rear. 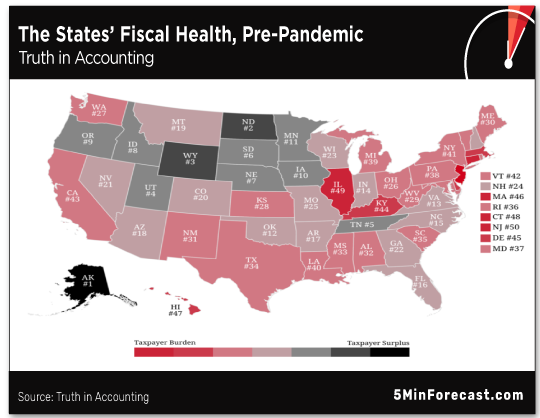 On the plus side of the ledger, good thing Alaska’s rated No. 1… because as we noted last week, its tax collections have collapsed along with the energy industry.

Oy… The “Bad News Bank” just can’t get out of its own way.

From an NBC News article bylined by Gretchen Morgenson — one of the few mainstream reporters we genuinely respect: “Some 1,600 Wells Fargo customers say the bank paused their mortgage payments without their consent, far more than previously known, according to correspondence the bank sent to two U.S. senators in August and September…

“Customers of Wells Fargo said they were placed in forbearance after simply having requested information about COVID-19 assistance programs or having clicked on related pages on the bank's website but not signing up. Some said they continued to make their payments to the bank.”

Of course, going into forbearance can ding your credit report — maybe even prevent you from refinancing at present low, low mortgage rates.

The bank is apologizing profusely and also professing it doesn’t “receive, nor do we pay our employees, any incentive fees or other compensation for placing customers in forbearance."

Uh… no one was accusing WFC of doing that. Why even bring it up?

Must be the guilty conscience after the $3 billion settlement earlier this year after its fake-accounts scandal — a practice that did rake fees from unsuspecting customers. Good grief…

[Ed. note: Did you know you can profit from companies that get bad press… as the share prices rise despite negative publicity? That’s the idea behind The Profit Wire, the premium trading service where I team up with our trading-floor veteran Alan Knuckman.

Since June we’ve played Wells Fargo, the Bad News Bank, for gains of 50.7% and a clean 100% — both in the space of a week. And we’re holding out for another gain on WFC within the next couple of weeks.

That’s the power of our proprietary QIT-4 indicator. Click here for a hands-on demonstration.

To the mailbag, and another field report of questionable COVID diagnoses…

“My wife and I attended a supper recently with friends in Yuma, Arizona, and these friends shared that members (two) of another church within their denomination were recently killed in a head-on crash somewhere on a highway in Kansas.

“They went on to say that the official cause of this couple’s death certificates was listed as ‘COVID-19.’ To say the least, the children of this couple that died were quite upset by this and reported their parents had NOT been exhibiting any symptoms of COVID-19 prior to the accident. The takeaway?

“It appears there are institutions out there that are lying and over-reporting COVID-19 deaths in order to reap financial gains from components contained in the CARES Act.

“So I’m NOT saying the virus is not serious and I’m NOT saying lots of people have not died from it, but my personal belief is that the numbers of deaths and positive numbers are way over-reported for financial gain.

“People, open up the economy and stadiums and the whole thing. For the most part it appears we have been duped. Hey, that’s America today — take it from Uncle Sam while he has coin and then blow it on whatever…

“So comforting to know all this, right?”

Addendum: The reader tells us he lives in a fast-growing area about 90 miles north of Phoenix.

“Out of work,” he says, “except for DoorDashing and Postmates deliveries, so my wife and I are moving to Iowa, where it is much cheaper to live. Houses here are going up by thousands in number per year as Californians escape their state.”

The 5: Yes, that’s one of the second-order effects of the outmigration from crowded and costly cities: The newcomers are making it more costly for the locals — some of whom might be moving on themselves. Good luck.

Happy Plaidurday and try to have a good weekend,

P.S. The latest market turmoil is serving up what Jim Rickards says could be “the biggest opportunity of your lifetime” — especially if the sell-off continues into next week.

How so? Answers here. “Please do not share this video with anyone,” he advises.

P.P.S. What if the president’s test turns out to be a false positive?

Hey, it happened to the governor of Ohio and the quarterback of the Detroit Lions within days of each other in August. And what does that imply for us plebes who typically get one test at a time?