Let’s talk about the Joe Biden-New York Post thing… and the free market.

As you’ve probably heard by now, the Post ran a story on Wednesday laying out new allegations about Biden and his son Hunter and their Ukrainian connections back when the elder Biden was still vice president.

As you might have also heard, Facebook reacted by “reducing [the article’s] distribution on our platform” — making it more difficult for users to discuss or share it. 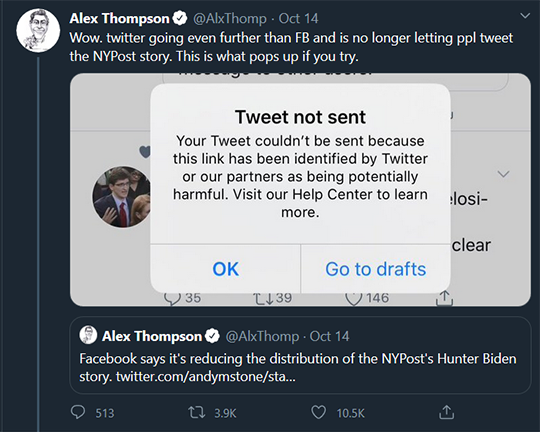 “Harmful.” To whom or what — aside from Biden’s electoral prospects?

As always happens after incidents like this — and to be sure, this one takes social media censorship to a whole new level — people scream that IT’S A FREE MARKET and Facebook and Twitter are private companies and they get to decide who gets to play in their sandbox.

For instance, here’s The Washington Post’s Radley Balko, an outstanding journalist whose work we’ve cited approvingly in years gone by…

But Mr. Balko’s hot take glosses over a phenomenon we first identified two years ago when Alex Jones was getting “deplatformed.”

The reality is that social media platforms are curbing “hate speech” and “misinformation” in reaction to the constant threat of new legislation governing their activities.

Over and over again, tech execs are hauled before Congress, lawmakers threaten to lower the regulatory boom on them and they respond by cracking down on speech in a way designed to please the lawmakers.

Twitter held out against this pressure for the longest time. It didn’t want to be a hall monitor for adults. But once it realized that was the only way to keep the feds at bay, it threw itself at the task with alacrity.

Solutions, you ask? We have none — other than radically reducing the size and scope of the federal government to the point that no one would care what Facebook or Twitter does to someone’s article about a presidential candidate, because the presidency wouldn’t have very much power.

Yeah, we know, dream on. Just one more reason we can’t really rouse ourselves about what everyone else seems to think is The Most Important Election of Our Lifetime™.

After a few days of losses, U.S. stocks are in rally mode as the week winds down.

No, there’s no obvious catalyst. Earnings season usually takes a break on Fridays. The big economic number of the day did surprise to the upside (read on), and Pfizer got word from the feds that if its COVID vaccine trial data is good, it could apply for emergency approval by late next month.

Or maybe it’s Coca-Cola’s decision to finally pull the plug on Tab? (Betcha didn’t even know they still made it…)

The big economic number of the day is something we’ll just have to chalk up as another ineffable mystery of 2020.

Retail sales jumped 1.9% in September, more than double the 0.7% the “expert consensus” was figuring on. If you throw out auto and gasoline sales, which can skew the totals depending on the circumstances, the number still trounces expectations — up 1.5%. Clothing and sporting goods are among the leading categories, although they’re still far below the year-ago figures.

Again, this is the September number. Long after the $600 a month in bonus unemployment benefits ran out at the end of July. Where in blazes is the money coming from?

And then there’s the always-revealing capacity utilization figure. During September, 71.5% of the nation’s industrial capacity — factories, utility plants, mines and oil fields — was being put to work. The number registered its first drop since the pandemic lows in April. 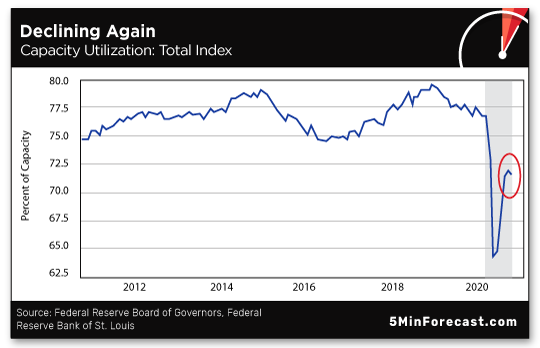 And the number is still lower than almost any other time on record, apart from a few months during the recessions of the early ’80s and 2008. Bleah…

Gold is holding the line on $1,900 as the week winds down… and the pullback from the early August highs is still “a buying opportunity,” in the estimation of gold industry veteran John Hathaway.

The price might continue to oscillate until the election outcome is known… but beyond that “the path toward monetary debasement is bipartisan,” writes Hathaway, manager of the Sprott Gold Equity Fund.

“A cursory inspection of the U.S. fiscal situation suggests that the U.S. dollar deserves to rank high on the endangered species list. There are many ways that a dollar devaluation could transpire. Inflation, pronounced loss of value against other currencies or a deflationary credit meltdown are all possibilities. In any of these scenarios, the dollar price of gold would rise.

“The four-year rise in gold from $1,100 at year-end 2015 to $1,900 in 2020 is an early signal of a failing currency regime. We believe that potential exists for the dollar price of gold to rise more than five–10-fold when that failure becomes plain for all to see. It is a matter of simple math. Timing remains uncertain but the outcome seems inevitable.”

[Ed. note: For broad exposure to quality gold stocks, it’s hard to go wrong with Mr. Hathaway’s mutual fund, ticker symbol SGDLX. (Until Sprott took it over in January, it was known as the Tocqueville Gold Fund.)

But if it’s the big money you’re after, you need to select a handful of top names with blowout potential. We’re about to unveil an all-new strategy to help you make that happen. Stay tuned…]

After all the hoopla surrounding Apple’s newest iPhone models this week, a puzzling question remains.

Our science-and-wealth maven Ray Blanco brought it to our attention: What’s the strange “button” on the side? 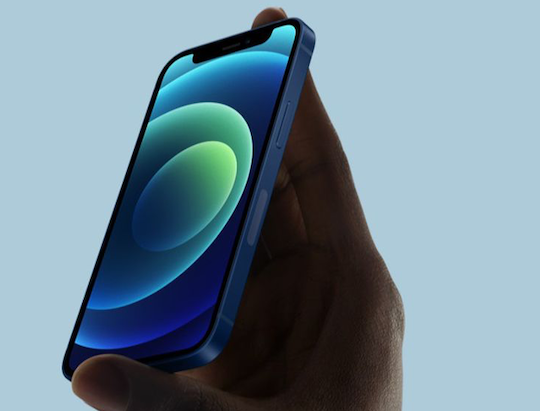 And no, that’s not the SIM card slot…

“One of the most important facts about the new iPhone was only mentioned in passing: it’ll support more 5G frequencies than any other smartphone at the time of launch. The details are buried in the technical data on Apple’s website.

“Among the 5G standards supported by the new phones are three obscure frequency bands that until now have been used for satellite TV signals. The FCC is quickly moving to repurpose those high-bandwidth data channels for 5G.”

➢ Important note: The FCC is holding a major spectrum auction for these frequency bands in early December. Ray will be watching closely for investing cues.

“As expected, it’s a pricier phone. The full-size iPhone 12 costs at least $100 more than last year’s model. And I suspect we were right about the reason why: the pricey communication chips that Apple’s using to offer more connectivity tech to its users.

“When it comes to 5G communications, Apple is designing its new phone to be future-proof…

And the wide spectrum of bands iPhone 12 can talk to potentially lays the stage for ‘Apple-Fi’ by ensuring that this current generation of devices can ‘talk’ to whatever a possible future link to the Apple mothership might look like.” 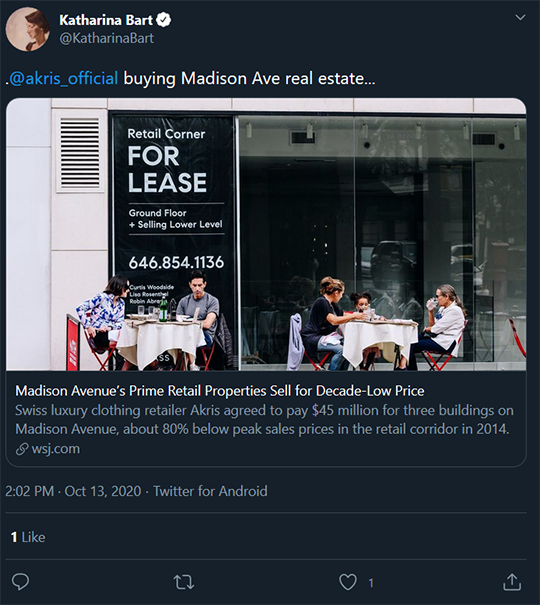 Three buildings along the main retail corridor on Madison Avenue have just sold — for 80% less than peak sale prices in 2014.

The Swiss luxury clothing retailer Akris just plunked down $45 million for the three properties, per The Wall Street Journal. For that sum, Akris gets three ground-floor retail spaces and a total 15 residences on the floors above — all between East 69th and 70th Streets, not far from Central Park.

The price works out to about $1,340 per square foot. The peak for Madison Avenue retail came six years ago, when a building six blocks away sold for $7,589 per square foot.

“Patience is needed, but we expect a pickup in traffic after we get control (of) the new virus,” says Akris president Peter Kriemler.

Between the lockdowns and the riots, some observers are stunned there was any demand for the properties at all. “This is a fair price given where we are in the cycle,” says Adelaide Polsinelli of the Compass real estate brokerage.

Before the mailbag, a brief emendation: We got dollars and cents scrambled yesterday when discussing the dividend of Kirkland Lake Gold. Thanks to the couple of alert readers — including a KL shareholder — who pointed it out.

“‘Business is alive and well this year!’… Really? What industry is that in? We are down 30% year over year since corona-crud, serving multiple manufacturing industries, and the next few quarters are not looking any better.

“However, this might be a good thing since it is extremely difficult to find employees. We simply can’t compete with the government’s benefits for sitting on your @$$ doing nothing all day.”

In examining the Optimism Index from the National Federation of Independent Business — the starting point for our dialogue this week — it’s worth noting the survey draws from a fairly high percentage of manufacturing businesses.

That might come as a surprise if you’re accustomed to seeing NFIB stickers at the entrances to independent restaurants, small retailers and whatnot. (They’re quite prevalent in your editor’s little stretch of the Upper Midwest.)

So far, manufacturing has rebounded from the lockdowns more strongly than services. But judging from our reader’s experience today, that’s not universal. And going off the industrial production numbers today, the rebound is losing steam in any event.

And so it goes here in the fourth quarter of 2020.

P.S. For the first time in many months, we just reopened access to Jim Rickards’ Project Prophesy — a unique trading strategy Jim developed during a stint he did with the CIA, aiming to uncover financial clues to impending attacks.

As you can imagine, he had to keep the wraps on many details surrounding this project for a long time — 15 years, in fact. Only now can some of those details go public.

See why Jim thinks this information could be a game-changer for millions of Americans like you when you click here. Note: The link will remain live only through midnight tonight.