“If you offend people on both sides, you’ve done your job well.” So said a maxim of journalism when your editor was a young pup, breaking into the TV news racket during the 1980s.

Of course, conventional journalism has thrown that maxim out the window — everyone’s playing to a partisan audience now — but I can still carry the torch here in The 5 now and then in my post-journalism career. To wit, our post-election musings Friday.

We’ll save the bipartisan bile for our mailbag section later on… but we wish to quickly spotlight a couple of developments since Friday.

First, it turns out the post-election fundraising grift is common to both major parties… 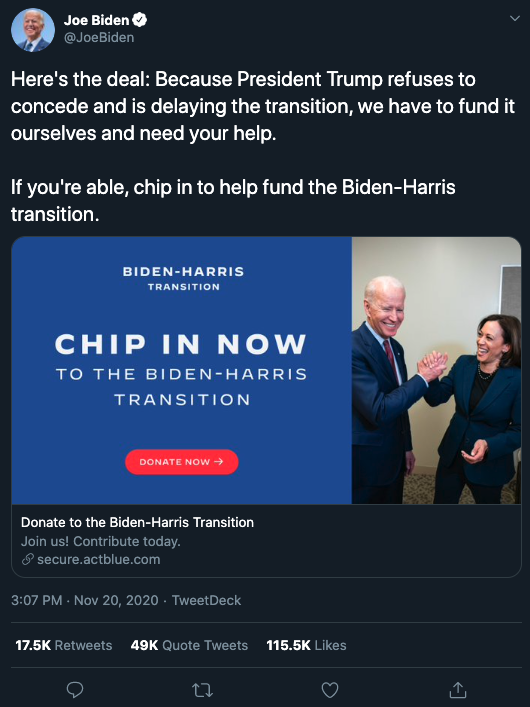 Amazing. “Yes, we’re swimming in Wall Street and Silicon Valley cash — but we still need you, Mr. and Mrs. normie Democrat, family ridden by COVID, struggling with the rent, to cough up just $5 or $10 more to help us do the work those worthless Republicans won’t. Can’t tell you exactly what we’ll do with it, but we promise to put it to good use!” 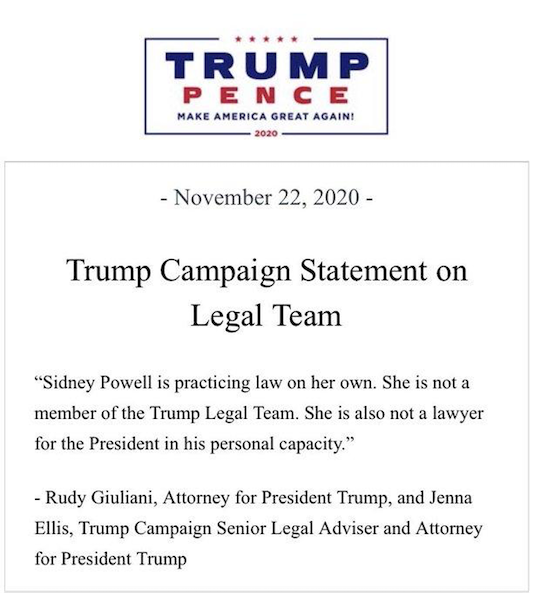 In the space of maybe 10 days, Sidney Powell went from MOST BRILLIANT LEGAL MIND SINCE BLACKSTONE! to — as our fave political reporter Michael Tracey says — “drunken Lionel Hutz reading strange theories on the internet.” 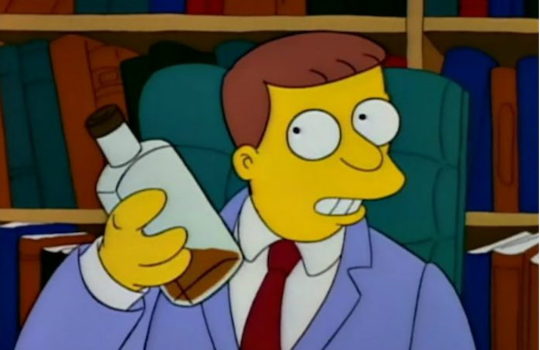 Now that she’s off the Trump legal team, you can once again send Powell money. From her Defending the Republic website: “Millions of dollars must be raised to defend the Republic as these lawsuits continue to be filed to ensure victory.”

Yes, just $5 or $10 more, Mr. and Mrs. normie Republican, laid off again from your service job after the latest lockdown orders. After all, victory is *this* close, right? That’s what they’re saying on Gab, anyway…

And so we come back to our ongoing forecast: Any widespread civil disorder in the near term will result not from the election but rather the lockdowns.

Buffalo, New York, looks like ground zero for the moment: The owner of a gym in suburban Orchard Park hosted a protest Friday night with about 50 business owners and their supporters — in defiance of shutdown orders.

“Video of the incident shows an Erie County health inspector accompanied by three sheriff’s deputies arriving about 20 minutes after the gathering began,” reports The Buffalo News. The footage “shows a tense back and forth, with one deputy pointing out that people weren’t wearing masks and the protesters accusing county representatives of trespassing and entering the property without a warrant.”

“Get out! Get out!” the protesters shouted. It appears no one was cited or arrested. Yesterday brought a protest outside the home of Erie County Executive Mark Poloncarz in North Buffalo.

“We’re not gonna make criminals of normally law-abiding citizens,” said Fresno County Sheriff Margaret Mims last week. “I haven’t seen any data for instance that shows that between the hours of 10 p.m. and 5 a.m., that things happen that cause a big spread of COVID.”

Ditto for Merced County, north of Fresno. Sacramento County and nearby El Dorado County don’t plan on enforcement, either.

Same story many places in Ohio. “How do you stop someone at 11 o’clock at night and then they say we’re going to McDonald’s?” Newtown Police Chief Tom Synan tells the NBC station in Cincinnati. “How do you enforce that?”

Yep. Chief Synan knows his authority rests, at least to some extent, on the consent of the governed.

For a third consecutive Monday, stocks are rallying on a pharmaceutical firm’s announcement of 90% or better positive results with a corona vaccine. This week it’s AstraZeneca, working in tandem with Oxford University. (To be precise, it’s 90% after two shots with this vaccine.)

Problem is these announcements are reaching a point of diminishing returns. Two weeks ago with Pfizer’s fanfare, the Dow soared more than 800 points. Last week with Moderna, less than 500 points. Today, at last check, barely 200 points — the Big Board is approaching 29,500.

“The Dow suffered its fastest correction ever earlier this year, dropping 37% in a matter of weeks,” our chart hound Greg Guenthner reminds us. “But it’s finally back in the green. And the gains are holding just fine heading into the short Thanksgiving trading week… 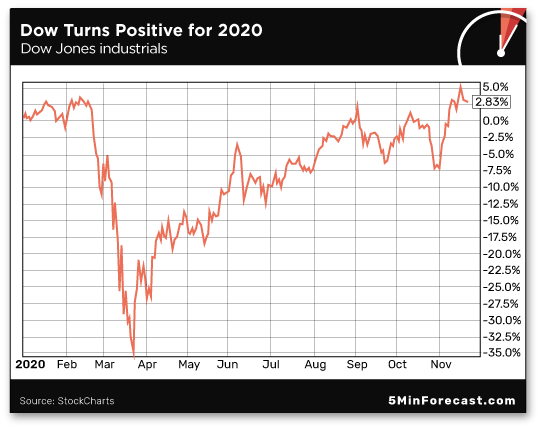 “Now that the Dow is hanging tight in positive territory, we should look for these household-name stocks to post an end-of-year melt-up into 2021. Don’t be surprised to see the Dow finish the year at new all-time highs.”

Precious metals are getting clobbered… and unlike two Mondays ago, the proximate event is not a vaccine announcement.

No, the bottom fell out just after 9:45 a.m. EST with the release of the “flash PMI” numbers for November.

The manufacturing figure crushed expectations at 56.7 (anything above 50 indicates growth). The services component also seriously outperformed at 57.7.

The overall figure clocks in at 57.9 — up solidly from October’s 56.3. The “expert consensus” among dozens of economists polled by Econoday called for a drop to 55.6. Oops.

We caution that the PMIs are “soft data” based on surveys. We’ll get a flood of hard data on the economy come Wednesday — including durable goods orders and consumer spending.

For the record: The euro was used for more global payments than the U.S. dollar during October.

That’s according to figures from SWIFT, the outfit that handles cross-border payments for more than 11,000 financial institutions worldwide.

The margin isn’t huge — 37.82% of transactions taking place in euros, 37.64% in dollars. “Trade upheaval, a pandemic-induced recession and political disharmony renewed pressure to reduce the share of international payments in dollars,” is Bloomberg’s take.

No, it’s not necessarily the beginning of the end for the dollar as the globe’s reserve currency. There was a lengthy stretch during 2011–2012 when euros were the favored currency for global payments.

But this is the first time the dollar has taken a back seat since nations like China and Russia embarked on a process of “de-dollarization” in 2014 — looking to get out from under the dollar’s thumb and become less vulnerable to sanctions and asset freezes.

While the corporate media fixate on a tussle between the Federal Reserve and the Treasury Department… the important question is what the hell happened to $340 billion?

The markets wobbled last week when the Treasury decided to allow some of the Fed’s pandemic emergency lending programs to expire at year-end. OMG, less free money for Wall Street!

At issue is the $454 billion set aside in the CARES Act for big-business bailouts. So far, the Fed has used only $114 billion of that $454 billion total. You can see the line items on the Fed’s weekly balance sheet statement — corporate bonds, municipal bonds and so on.

So what’s happened to the other $340 billion?

According to Pam Martens and Russ Martens at Wall Street On Parade, “Despite regular promises from the Fed chairman that the Fed will be transparent about its lending programs, there are four programs for which the Fed has yet to provide transaction-level data — meaning the names of the borrowers and how much they borrowed.”

Get this: All four of them provide support directly to Wall Street. And Treasury Secretary Steven Mnuchin is asking for all four of those programs to be extended beyond year-end. It’s the others, like the Main Street Lending Facilities for small and midsize businesses, that he’s ready to kill off.

There’s supposed to be congressional oversight of this fiasco, but as we demonstrated seven months ago, it’s a joke.

So to the mailbag and our performance as equal-opportunity offenders…

“If you idiots are too stupid to see what the ****ing Democrats and the deep state have been planning for the past four years in regard to this election, then you deserve to lose all your readers. And you can’t fix stupid. It’s in your DNA!”

But wait… When we said we “have no doubt” the deep state was undermining both the Trump campaign and the Trump presidency with the Russiagate nonsense, we heard it from the other side…

“Really? Where’s your proof of this ‘have no doubt’ conspiracy? Wasn’t Special Prosecutor John Durham supposed to produce this campaign-crushing investigation (before the election)? Where’s Durham? Where’s the proof? One minor guy that modified, what, an email? Nothing else? We’re waiting. What about the inspector general report (last December, wasn’t it)? Nothing! The Republican Senate report earlier this fall? Nothing!

“But you keep waiting and spewing unsubstantiated accusations for your right-wing clients. What a joke.”

The 5: For the record, we had zero faith that either Durham or Attorney General William Barr would come through with anything on the origins of Russiagate.

We said so in the summer of last year. We described how Barr and Durham are themselves deep state to the core; they covered up Iran-Contra, Ruby Ridge and, more recently, CIA torture.

If you have an open mind, check out the reporting of Aaron Maté at The Nation and RealClearInvestigations. Here’s a good place to start, and here’s a pithy quotation: “If the FBI had investigated President Barack Obama for more than two years on the false allegation of conspiring with or being an agent of a foreign power, Democratic leaders would rightfully demand a full inquiry.”

Maté is a man of the left — no Trumper he — so he’s arguing “against interest,” as the saying goes.

“Among my friends and colleagues there has been much discussion over Tucker Carlson’s Thursday night rant against Team Trump,” a reader writes.

“Some agree with Tucker that TT should show us the goods, but as a retired lawyer I can safely say that no attorney worth his license is going to reveal key evidence to the public prior to the hearing. Why give your opponents more time to craft (make up) a stronger defense?

“Furthermore, Tucker complained that ‘the media’ were not practicing journalism because they refused to independently investigate the facts. (Apropos of nothing, the media have not really practiced journalism since Woodward and Bernstein did their thing.) So if I were talking to Tucker, I would be asking him when he is going to get his folks to start digging up the facts.

“As for myself, I hope that whatever happened on Election Day and the days following is all brought to light and that if anyone is guilty of malfeasance — or merely misfeasance — they get what they so richly deserve. It’s crucial that the American people retain confidence in the electoral process.”

“It’s reckless indeed to shut down discussion on the election when 70%-plus of Trump voters believe the election was stolen,” another reader writes.

“That’s over 50 million voters. That won’t bode well for a Biden presidency, rife with problems already.”

The Russiagate hysteria was so effective, one poll revealed more than half of Democrats believed that “the Russians” actually altered vote totals in 2016 — something only the most hard-core Trump-Russia-collusion truthers ever asserted.