Is this the next front in the war on remote workers?

First, we had the geniuses at Deutsche Bank suggesting remote workers wouldn’t miss 5% of their income to help support their in-the-trenches comrades. (And by “in-the-trenches” we mean anyone who must leave the four walls of their corona-caves to earn a living.)

Now internet providers are capitalizing on the WFH revolution… or the massive workplace upheaval, courtesy of a global pandemic!

According to an article at The Washington Post: “Comcast said this week it would start charging more for heavy users of home internet in the Northeast, sparking complaints from some customers as the global pandemic keeps life online.

“Now the company is expanding its controversial data thresholds… starting next year.

“Comcast Xfinity customers in New York, Virginia, Maryland and 11 other northeastern states, plus D.C., will be able to use up to 1.2 terabytes of data each month before they start getting charged more, regardless of what speed plan they use.

[Side note: In 2017, we reported an American Customer Satisfaction Index survey found that consumers would prefer to wrangle with government agencies — the IRS included — rather than interact with Comcast. Still setting the bar low, we see…

For investors, a cable workaround is underway, and our tech stock pro Ray Blanco has got the goods right here.]

Comcast spokesman Joel Shadle says: “We’re aligning our Northeast markets with the data plan that [the] rest of the country has had for several years, and 95% of our customers are not impacted by it even with the increased usage during the pandemic.”

Well, actually… “A study from broadband software and analytics company OpenVault found the number of customers using more than one terabyte of data doubled from the same time last year,” WaPo says, “though it hovers around only 8.8% of internet subscribers.”

And with much of the Northeast sheltering in place and school reopening plans scrapped, “it’s getting easier for households, especially with multiple people working from home, to hit new internet thresholds.”

For another perspective on the work-from-home revolution…

“When we last checked in with the ‘work from home’ trade in late October,” says chief market analyst Greg Guenthner, “this group of 2020 standouts was once again bumping into support near its highs.

“Even though many of these stocks were (and still are) ‘expensive,’” Greg says, “they continue to churn higher.

“But not without encountering some bumps along the way.

“For starters,” he says, “a deluge of positive vaccine news in November took a bite out of many of these stocks, leading to another sharp pullback in the Direxion Work From Home ETF (NYSE: WFH).

“This retreat didn’t last long,” says Greg. “And once again, these stocks are flirting with breakout levels… 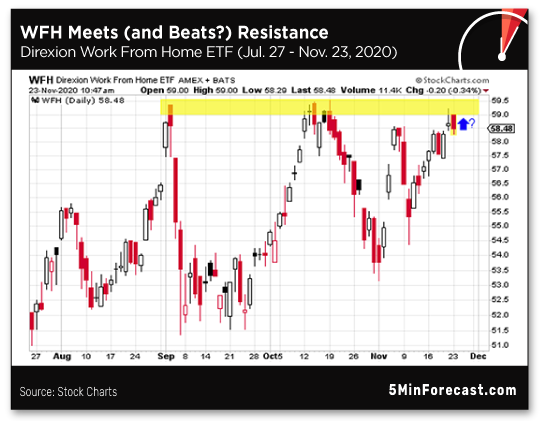 “If they can make a serious push,” he concludes, “we could see new all-time highs before the end of the year.”

[Congrats to Greg and his team at The Weekly Fortune Alliance, a newly launched research and trading service.

Here’s why kudos are in order: Greg’s subscribers just took their biggest gain ever this morning… raking in 174%… on GameStop… in just 10 calendar days!

For access to Greg’s latest research, including chat and live updates — as well as a crazy-good portfolio — view this offer today.]

The market appears to have a Thanksgiving hangover: The Dow’s shed 300 points today… but the Big Board’s still just shy of 30,000.

Turning our attention to commodities, oil is down 1.5% to $44.83 for a barrel of West Texas Intermediate.

“Mark your calendars for Dec. 8,” says our science and technology authority Ray Blanco. The FCC will be holding a major auction…

“To meet the needs of 5G,” Ray says, “the Federal Communications Commission is repurposing a chunk of the C band for mobile devices.” More specifically, the FCC will auction off “5,684 licenses for 5G communications in the C-band spectrum.”

Not to get all sciency, but…

“C band is made up of the 4–8GHz frequencies of the electromagnetic spectrum,” says Ray. “The FCC is planning on opening the bottom 280MHz of that range for 5G operators.”

Ray notes: “Unlocking a portion of the C band for 5G also means that 5G devices will be able to use a combination of low-band, midband and upper millimeter-wave bands that provide a wide spectrum that can get around physical obstacles to transmissions from the device to the tower and ensure that there’s plenty of capacity as 5G becomes more prevalent.”

So how does this translate for investors?

Ray says: “The one sector you should avoid at all cost are those that were forced to sell off these licenses.

“Names like Intelsat or SES SA have had a horrible year because of this and are major short targets for investors,” he says. “Intelsat for instance has lost 97% of its stock value since the auction was announced in November of last year.

“On the other hand,” Ray continues, “[companies] that control this space will be able to transmit 5G to their customers immediately. And that means immediate profits for the carriers out there.

“The most likely high bidder is Verizon,” says Ray, “which is estimated to invest as much as $18 billion into 5G and other network infrastructure upgrades.”

Other carriers — including AT&T and T-Mobile — have “some financial constraints.” Verizon? Not so. “Verizon has the combination of available cash and the need for more 5G spectrum in U.S. cities.”

“The coronavirus crisis has led to another assault on savers,” says our wealth and income expert Zach Scheidt.

“With many companies seeing profits dry up or experiencing losses, corporations have had to cut back on dividends they pay investors,” he says. “That's unfortunate because dividend income has become one of the few reliable sources of cash flow for retirees.” 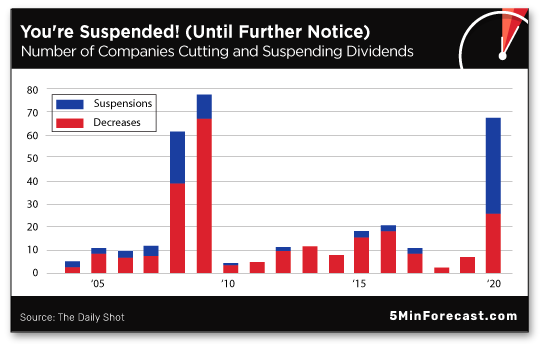 “If you own some of the stocks that have cut their dividend,” says Zach, “you've probably felt the pain.”

And the war on savers is twofold — particularly affecting retirees — with the Federal Reserve’s low, low interest rates and shrinking income-generating dividends. In this environment, Zach says: “It’s easy to slowly erode your wealth by spending the capital you've worked so hard to set aside.

“Fortunately, there's another side to this investment coin…

“When a large number of companies cut their dividends,” says Zach, “it means fewer companies are paying reliable income to shareholders.”

He’s talking basic supply and demand here: “Since the number of investors who need… income is still high, investors will pay more for stocks with reliable dividends.

“Because investors are flocking to a smaller selection of stocks that can keep paying dividends,” he says, “the prices of their shares have been trending higher.”

Zach’s takeaway? “Consider investing a meaningful amount of your retirement wealth in today's dividend stocks that continue paying their shareholders.

“If you do, I expect you to both collect reliable dividend payments and see your wealth grow as the share prices trend higher.”

“What we need to save 2020 is little autonomous robots serving us Kentucky Fried Chicken whenever and wherever,” says an article at The Drive. 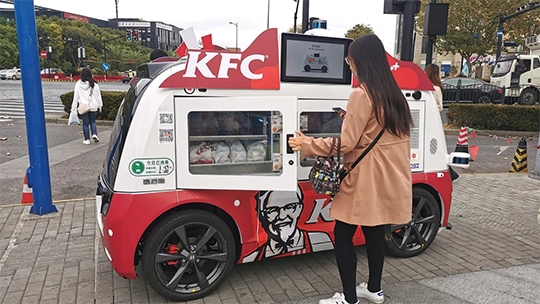 The love child of a Roomba and a vending machine…
Courtesy: Twitter

“Luckily (if you live in China), KFC is already on top of things,” the article continues. “The American fast-food chain recently deployed autonomous buggies to several areas of the country, including an area… outside of Shanghai.”

The autonomous pod is the brainchild of “Beijing-based autonomous delivery startup called Neolix, which raised upward of $29 million in funding earlier this year…

And once fully charged, the fast food-on-wheels can roam for 62 miles at speeds up to 31 mph, “making it ideal for cities and high foot-traffic areas like colleges or large office campuses.”

Last week, we asked readers about the real cost of their Thanksgiving spreads…

And no fast food for this guy: “Turkey cost $125 (organic of course). Potatoes fresh from the garden. Friends brought green beans; daughter made mac & cheese. Homemade sausage dressing and pie for dessert.

“Who cares about cost when it’s real food?”

Another reader says: “I am an American who got stuck overseas in Laos when my flight was cancelled and international travel ground to a halt.

“I went to a small restaurant called The Fat Cat in Luang Prabang, Laos. One of the owners is American, so they put on a Thanksgiving spread for all the expats and stuck travellers.

“The menu was a choice of smoked duck, stuffed chicken or stuffed pork with cranberry sauce, pumpkin mashed potatoes, stuffing and gravy. My total cost — with two large 24-ounce beers — was $10.50.

“I am thankful for every day that I am here in Laos; we have had virtually no COVID, no curfews, no ongoing lockdowns, no social distancing, etc.

“The cost of living is low, 90 degree weather every day and now that I’ve been in Asia for almost a year, I'm planning on moving here permanently.”

The 5: The quality (and cost) of dinner sounds appetizing — adult beverages included! But 90 degrees? You lost us there…

P.S. “Trash the market reports and ratings,” says our chief market analyst Greg Guenthner. “Most of them are totally useless for trading purposes…

And that’s precisely what you’ll get from Greg and his team at The Weekly Fortune Alliance — information that had subscribers pulling in 174% gains on GME shares in just 10 days!

And Greg’s just getting started… So why not get started today?