"For years we have needed a tax on remote workers," says Deutsche Bank analyst Luke Templeman. "COVID has just made it obvious."

Here’s the proposal: “a tax of 5% of a worker's salary if workers choose to work from home when they are not forced to by the current pandemic,” says an article at the BBC.

It only gets better: “The tax would be paid for by employers and the income generated would be paid to people who cannot work from home.”

Deutsche Bank analyst Mr. Templeman continues: "The virus has benefitted those who can do their jobs virtually, such as bank analysts, and threatened the livelihoods or health of those who can't.” (Emphasis ours.)

So what’s Mr. Templeman’s beef with telecommuters anyway? He contends they contribute less to the economy "whilst still receiving its benefits.”

The BBC says: “By working from home, people aren't paying for public transport or eating out at restaurants near their places of work, while expensive offices remain virtually empty.”

Back to Mr. Templeman: "WFH offers direct financial savings on expenses such as travel, lunch, clothes and cleaning," he says. The 5% tax rate "will leave them no worse off than if they had chosen to go into the office.”

Furthermore, whilst you might think Deutsche Bank’s tax proposal is only a very British problem, not so. The Bank’s researchers have already done the math (or should we say maths?) on what Americans working remotely would pay.

As for how governments would use the largesse…

“The tax revenues would be used for a very specific purpose — to give grants to the millions of workers who cannot do their jobs from home and who make less than $30,000 a year,” the BBC says.

We’re speechless… which is antithetical to Deutsche Bank’s intention “to spark debate around a series of important topics.”

Our wealth-redistribution superfan Mr. Templeman has probably gotten an earful: "A lot of people aren't impressed at the idea of another tax,” he says. You don’t say…

“However, some have seen it as an interesting policy that governments can use to redistribute some of the gains from the pandemic which have been unexpectedly accrued by some people while others have lost out."

As someone who works from home, I’ll let Mr. Templeman volunteer 5% of his income…

Our little chart of horrors is getting slightly less horrific: The lowest number of weekly unemployment claims since the pandemic hit — 709,000 — still exceeds the pre-pandemic record… 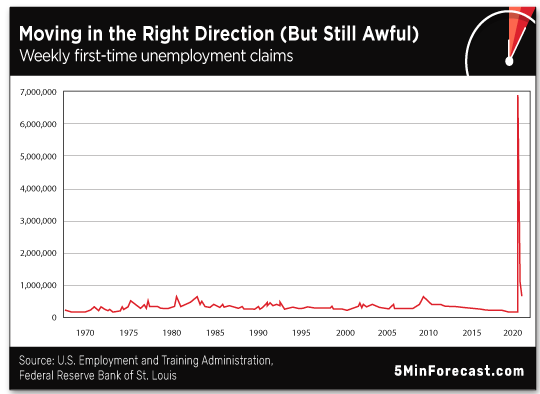 For the major economic number of the day, the consumer price index slipped 0.2% annually in October, against economists’ expectation of a 0.1% increase. The official year-over-year inflation rate works out to 1.2% — the first drop in five months.

Of course, as we frequently point out, any resemblance to your own cost of living is purely coincidental… 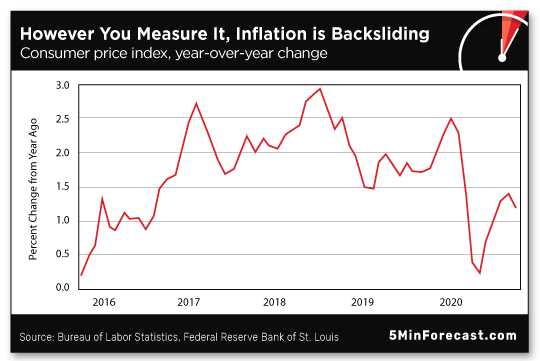 Even by Shadowstats’ estimation, inflation is retreating back below 9%…

“The electorate may be divided on many things,” says pot stock expert Ray Blanco, “but for cannabis, it was a clean sweep.”

Alongside voters’ affirmation of cannabis across the country, Ray cites a Gallup poll that’s asked Americans the same question since 1969: “Do you think the use of marijuana should be made legal, or not?”

For the record, the percentage of Americans who answered yes to that question in 1969 was just 12%. Fifty-one years later, about two out of three Americans approve… 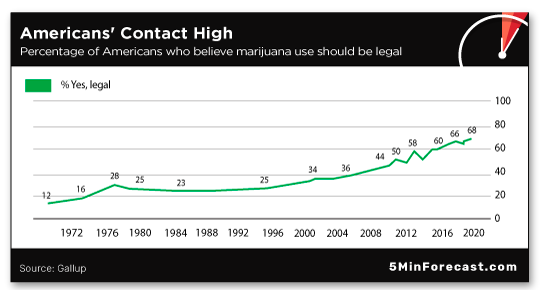 “Gallup’s latest polling shows that legalization is more popular than ever,” says Ray, “with 68% of the country — a new high — supporting legalization.

“And that support showed up in the voting booth, where cannabis passed in every state where it was on the ballot.”

And South Dakota (population: 900,000) legalized medical and recreational marijuana concurrently. While 57% of voting Montanans passed Initiative 190, approving the recreational use of cannabis.

“Altogether… over 20 million Americans will have access to cannabis for medicinal or recreational purposes with these votes,” Ray says. “The electoral sweep could add $9 billion to the U.S. cannabis market, according to analytics firm New Frontier Data.”

Ray notes: “When a state with existing medical flips the switch on recreational, the market size can be a multiple. Some insiders have told me the ratio can be as high as 4-to-1.”

As state after state affirms legalization, that’s a boon for cannabis-stock investors… But what about the marijuana industry’s holy grail: federal legalization?

Working under the assumption he’s the president-elect, Biden’s endorsement of federally legal marijuana has been tepid at best.

“While many former 2020 Democratic candidates have evolved significantly on drug policy — and particularly marijuana reform — over the years,” says an article at Marijuana Moment,

“Biden has only gone so far as to say he now supports decriminalization, moderate rescheduling, medical cannabis legalization, allowing states to set their own laws and record expungement.”

Think old Joe’s largely out of step with members of his own party? Not exactly… In July, the DNC shot down an amendment to add federal marijuana legalization to the party’s platform.

“The final vote against, 106-50, is almost a perfect inversion of the two-thirds of the public who want legalization,” according to Reason.

And they call themselves progressive…

Retailers in the U.K. are lashing out against “nonessential” status during the second round of pandemic shutdowns.

Amanda Leigh Slattery, founder of Boutiques in Business, says her store was barely managing to stay afloat before new COVID restrictions, with “£100,000 of stock… in our stockrooms because we didn't sell it this summer.”

So in protest to forced closures, “the group of boutiques are turning their shop-window mannequins around,” BBC reports, “as they say that the government has turned its back on them.” 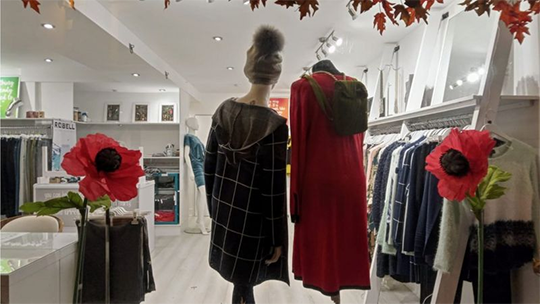 "November is our busiest trading month and we're hamstrung,” says another shop owner, Naomi Walker. “I feel we are being slowly strangled to death.

On Oct. 27, The 5 mentioned Europe’s recurring lockdown measures would ripple stateside in three–six weeks. A little over three weeks later…

And we don’t know about you, but in Michigan and Maryland — where Dave and I reside — schools are scrapping plans for in-person learning. Restaurants are limited to takeout/delivery or, as is the case in Maryland, restaurants are in the “contact tracing” business… if they want to keep dining rooms open at 25% capacity.

Wednesday, New York’s Gov. Cuomo put his foot down with a new round of statewide COVID-19 restrictions, imposing a 10 p.m. curfew on bars, restaurants and gyms starting Friday.

Additionally, he’s capping gatherings at private residences to 10 people. (No word if they’ll have a curfew too.)

As you can see, Cuomo’s rules require a flowchart… 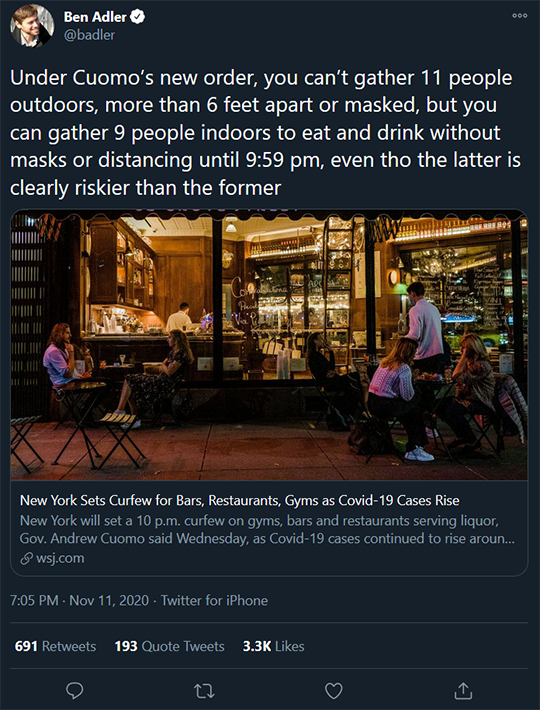 “The three-term governor threatened… further measures,” The New York Post says. “If that doesn’t work, if these numbers keep going crazy,” Cuomo says, “you will go back to a closedown.”

Now go to your room!

With Thanksgiving two weeks from today, we’re wondering if that big family dinner is still on the table. Literally…

If you suffer from insomnia, have we got some late-night reading for you! Terms and Conditions. (No, that’s not the title of a book… but it should be. A Harlequin romance?)

“The combined terms and conditions of 13 top apps,” BBC reports. “contain a joint total of 128,415 words — longer than any one of the first three Harry Potter novels.”

[Side note: This might be an unpopular opinion, but that’s the number of Harry Potter books I managed to get through before packing it in. Couldn’t care less about Harry, Gryffindor… or He Who Must Not Be Named. Voldemort, there I said it.]

And T&C’s don’t use plain language either, accessible to, say, your average fifth grader; instead, a 2018 BBC study found “that several website policies required university education levels of reading ability.”

Privacy researcher Stephanie Hare says: “It is difficult, if not impossible, for most of us to work and live today without using a smartphone, computer and other devices that allow us to transact online," she says.

But understanding and consenting to Terms and Conditions? "Consent implies choice,” Ms. Hare concludes, “but choice is not what's on offer.”

“Greetings!” a reader writes. “I must respectfully take issue with your report on President-elect Biden’s plan for Social Security.

“You quoted Baylor business professor emeritus William Reichenstein saying: ‘The Social Security program is intended to be primarily a required-savings program and not primarily an income-redistribution program.’

“Regardless of the ‘intention,’ the Social Security program has always been a wealth-redistribution program. For decades, politicians were able to maintain the fiction that there was some kind of ‘trust fund’ that benevolently held our contribution. This is patently false. There is no ‘trust fund,’ there is no ‘lockbox’…

“The Social Security program is, and has always been, a transfer program: it collects money from taxpayers and gives it to beneficiaries. We give our money to the politicians, and the politicians spend it. And anyone who truly believes that that sort of money was going to pile up in Washington, and the politicians would keep their hands off of it, has a hell of a lot more faith in politicians than I do.

“Thanks for letting me vent. Keep up the good work!”

The 5: We heartily agree. There is no “lockbox” for Social Security, to rehash Darrell Hammond’s sendup of Al Gore on SNL in 2000… 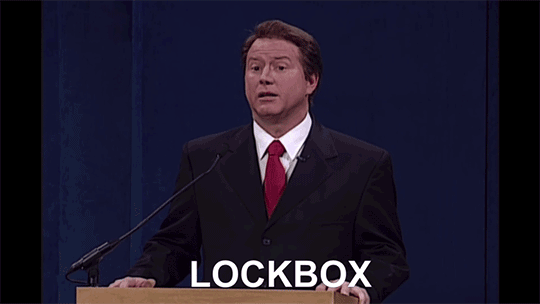 Or as former U.S. Comptroller General David Walker said in 2010: The trust fund “can’t be trusted, and isn’t funded.”

Take care. We’ll be back tomorrow…

P.S. Confidential to Platinum Reserve members: Executive publisher Addison Wiggin just wrapped up an exclusive briefing with David Walker. Keep an eye out for Addison’s daily emails for the link…