So here’s the big headline of the day so far… 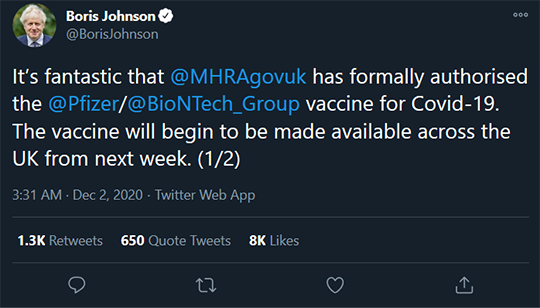 The U.K. government is the first in the world to give its blessing to a COVID vaccine — the one from Pfizer and BioNTech.

The MHRA — Britain’s version of the FDA — has deemed the vaccine safe. Supposedly the first 800,000 doses will be administered starting next week.

Now here’s something you’re not likely to read elsewhere… 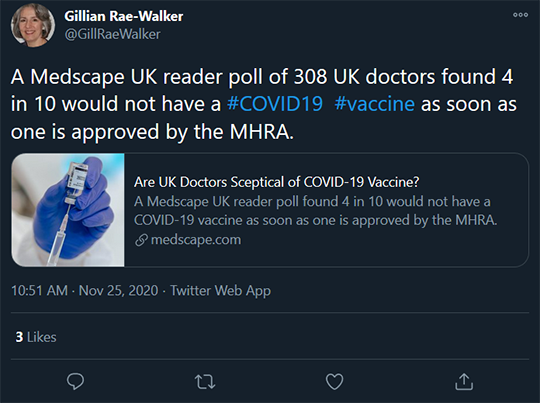 OK, it wasn’t a big survey — as it says right there, only 308 British doctors who read Medscape (a reputable website owned by WebMD with a target audience of health care professionals). And it appears to be an online poll where the participants were “self-selecting,” not a random sample.

But there it is — four in 10 doctors responding to the survey said they wouldn’t take a COVID vaccine right away. Significantly, the survey was conducted from Nov. 18–23 — after Pfizer and BioNTech announced their positive trial results.

In addition, six out of 10 said vaccination should not yet be compulsory even for health care staff — much less the population at large.

So why do those four in 10 have qualms?

The survey asked them: 56% said they would have safety concerns regardless of what the MHRA says. And another 27% simply said it’s too soon — they’d rather wait.

All of which lines up with what we’ve been saying for the last eight months. Until now, science has failed to develop a vaccine for human use treating any form of coronavirus. Meanwhile, approval of the mumps and measles vaccines in the 1960s took four years — and that’s when regulators were much less stringent.

Or maybe it’s the timing of the survey on the heels of the Pfizer-BioNTech announcement… and a recognition that being first doesn’t necessarily mean being best.

The other headline-grabbing vaccine of recent weeks — the one from Moderna Therapeutics — is less problematic in this regard. But even here, long-term storage requires temps of -4 degrees Fahrenheit.

“This isn’t really a race,” says Dr. Margaret Liu, chairwoman of the board at the International Society for Vaccines. "Just by sheer numbers,” she told NPR last month, “we probably need multiple, multiple vaccines.

"It may be that the second one or the 50th one is actually a better vaccine."

But what is it that makes a “better” vaccine?

Both the Pfizer and Moderna vaccines are of the mRNA variety — with the “m” standing for “messenger.”

A traditional vaccine uses actual bits of an invading organism to trigger the body’s immune response. In contrast, mRNA vaccines trick your body into generating the immune response without an actual sample of the corona-crud. Instead, the messenger RNA sends “instructions” to your DNA.

That’s a huge leap, to be sure.

But let’s go a step further: What if a vaccine could cut out the middleman, as it were, and rely on DNA constructs rather than RNA ones?

“Here’s where other vaccines, earlier in development, could eventually win the race,” says our science-and-wealth maven Ray Blanco.

Ray’s following the development of a DNA-driven vaccine. The key advantage? It’s stable at room temperature for a year. Want longer-term storage? It can be refrigerated for up to five years.

“In other words,” says Ray, “this vaccine can be stored just like the seasonal flu shot you can go get at your corner drugstore, no special cooling equipment required. You can ship it anywhere in the world without special freezers.”

No, it’s not days away from distribution. It’s still in Phase 2 trials, not Phase 3. But those trials are now moving forward after the FDA lifted a temporary hold a few days ago. And Ray’s exhaustive analysis has led him to conclude this vaccine has the inside track to be the “best” — even if it’s not the “first.”

Paying subscribers to Ray’s entry-level newsletter Technology Profits Confidential already know the name of the company behind this vaccine; out of respect for them, we’ll withhold it today. Of course, you can join the ranks of Ray’s readers and get immediate access to the best biotech and high-tech research you can buy for the price of a modest dinner out.

➢ Ultimate cynical take: We see a few doubting Thomases on social media pointing out that the U.K. government might be racing the clock: The vaccine is produced in Belgium, and imports into the U.K. could hit all manner of snags at the first of the year — when the next phase of Britain’s divorce from the European Union goes into effect. Hmmm…

The stock market is pausing for breath in its late-year rally.

Both the Nasdaq and the S&P 500 notched record closes yesterday, and both are slightly in the red today. The Dow is also down a hair — back below 29,800.

Gold is picking up more steam, rallying to $1,825 at last check. But silver has lost its grip on the $24 level for the moment. Crude is inching up toward the $45 mark again.

The only economic number of note today is the payroll firm ADP’s estimate of new private-sector jobs for November. The figure comes in way less than expected at 307,000. But ADP no longer has much predictive value (if it ever did) for the monthly jobs report from the Labor Department that comes two days later.

So much for the main promise of the Paycheck Protection Program — tiding over small business through the pandemic.

After months of litigation filed by nearly a dozen media organizations, the Small Business Administration has coughed up figures that give us a better idea of who benefited from PPP loans.

Out of more than 5 million loans totaling $522 billion through August… more than half the money went to just 5% of the recipients.

What’s more, about 600 mostly larger companies got the maximum loan of $10 million each. Among them were chain restaurants like Uno Pizzeria, Legal Seafoods and Boston Market.

As if we need even more evidence of how lockdowns have transferred wealth from small business to big, right?

The pandemic has sped up Social Security’s insolvency by at least three or four years.

Back in April, Social Security’s trustees issued a report saying the program’s trust fund would be exhausted by 2034 — forcing a cut in benefits. Of course, the report was based entirely on pre-pandemic data, so it was useless.

In September, the Congressional Budget Office issued its own estimate: If nothing was done by 2031, it would take a 20% or great cut in benefits to keep the system solvent.

Then a few weeks ago, the Bipartisan Policy Center think tank came up with an estimate of 2030.

“The closer these dates draw,” says the BPC report, “the more drastic and unpalatable any solution that maintains the traditional financing structure of the program will have to be: Tax increases will be sharper, benefit cuts will be more severe and the cohorts of workers who bear these changes will have less time to plan their finances accordingly.”

We’ve already spelled out a likely scenario for Social Security reform under a Joe Biden presidency, a Nancy Pelosi House and a Mitch McConnell Senate. You might want to review that now.

One undeniable winner of the pandemic — trashy paternity-test daytime TV.

The Nielsen TV ratings people are out with a study of viewing habits in the work-from-home era.

As Bloomberg summarizes, “Professionals working from home during the pandemic are spending two hours and 10 minutes more per week watching TV during the day than they did before the coronavirus struck…

“About 65% of consumers surveyed back in August said they were watching videos during breaks, but more than half also said they tune in while working, often with the sound on.” 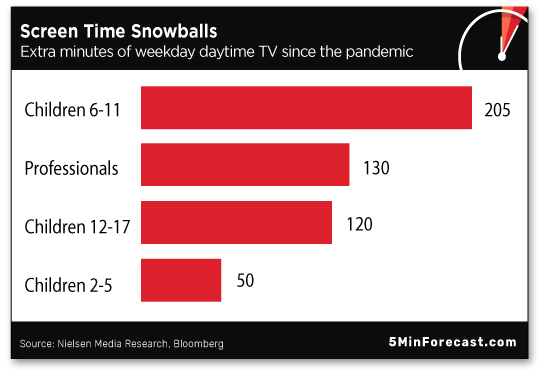 For the record, your work-from-home editor of several years’ standing watches only international news channels. At this moment I’ve got three screens going — Al-Jazeera, France 24 and CGTN from China. With the sound down, thank you.

“It is truly sad how many people out there (including many of your subscribers) can't recognize pure, factual, nonpartisan analysis,” a reader writes after Byron King’s evaluation of the incoming president’s national security appointments.

“There was little if anything subjective in Byron’s analysis.

“There is way too much observational and confirmation bias amongst Americans. Some people see Trump as their savior and take offense at any and all criticism (regardless of validity) while others see Biden as a second ‘messiah’ (Obama was the first) that can do no wrong and anyone who doesn't agree is stupid, racist, etc.

“Ask Democrats to name even a few good things Trump has done, and ask Republicans good things that Obama has done (good luck with that). Both the Republican and Democratic parties seek to tell their members how and what to think. It seems to be increasingly rare to find individuals who refuse to succumb to propaganda and groupthink.

“Every time I try to engage in any type of factual, rational discussion of the issues, people get emotional and either refuse or can't stick to the facts and resort to using terms like racist or communist because they don't know the actual facts. It’s too easy to be told what to think instead.

“Thanks for your nonpartisan analysis as always. When you anger both sides equally, then you must be doing something right!”

“I must have hit a nerve,” Byron tells us — “which proves the old adage that when you're over the target, they shoot at you.

“To those people who reflexively support Biden & his team of Beltway careerist warhawk-chickenhawks… come back and talk to me in a year or two, when those military geniuses get the U.S. into another war in the Middle East or Asia-Pacific. And we're bogged down again, and likely losing.”

We’ll get into the weeds of Biden’s China policy next week, by the way. Scary stuff — and not for the reasons you might think.

And to the reader who inquires whether Byron ever “ran for sheriff”… turns out he made a sacrificial run in the early ’90s at the congressional seat of a hack-lifer who was already 11 years into a 22-year stint.

“Crazy idea,” he tells us, “and I did not then — nor do I now — have the necessary personality disorder to be successful in politics.”

Obviously, he didn’t win. “But I did walk the streets to obtain signatures on the nominating petitions… and raise money, knock on doors, speak with thousands of people, meet the president of the United States, deal w/ all manner of politicking out of Washington, dig deep into all manner of people's issues and wind up getting many tens of thousands of votes on Election Day.

“It was an honorable race… And win or lose, you win by running.”

We launched this service during a special promotion over the holiday weekend. For the moment, it’s closed to new subscribers… but as soon as it’s open again, we’ll let you know.