According to Reuters, the letter “laid out standards [countries] must meet on issues such as money laundering and where they source their gold — or be blacklisted.” (The letter’s never been published in full, FYI.)

LBMA Chief Executive Ruth Crowell elaborated: “Our goal is to work jointly with these key markets to advance global standards, not to disengage from them. However, we are also committed to act if there is not meaningful and effective improvement.” 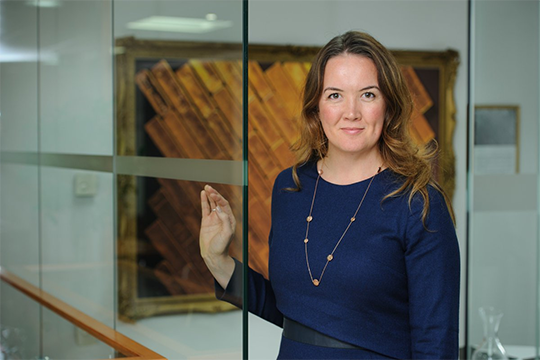 Although the letter didn’t target any one country for unsavory practices, reading between the lines, “the gold industry in Dubai in the United Arab Emirates (UAE) was the main focus.”

An unnamed source *eye roll* told Reuters: “Unless they shape up, by early next year… the LBMA will say refiners can’t source from Dubai.”

The LBMA’s drop-dead compliance date, by the way, looms: Jan. 31, 2021. And more than one gold expert believes the LBMA letter’s subtext has more to do with maintaining a stranglehold on the gold market rather than with high-minded humanitarianism.

The LBMA letter, then, is problematic on a couple levels…

“These recommendations, which have no legal standing, attempt to coerce the bullion markets… while forcing co-operation with regional and international organizations,” says precious metals analyst Ronan Manly.

He responds: “I wonder if anyone at LBMA is concerned about being sued by the World Trade Organization or U.K. courts for attempting to maintain its cartel-like control over an industry by imposing its own discretionary brand of blacklisting, without being a democratically elected trade body?" 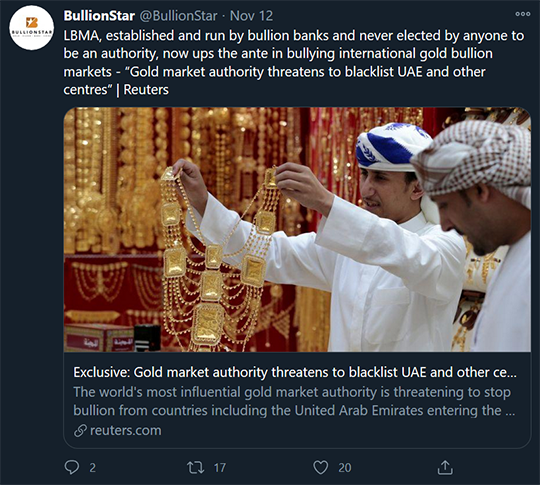 And Mr. Bin Sulayem makes this closing pot shot: “Perhaps it is time for the sun to set on LBMA and its delusional leadership in order for it to make way for an effective, untied, democratically elected regulator that functions under a policy of inclusion, not subjugation.”

Mr. Manly continues: “Beyond the fact that the LBMA is not a global authority on telling bullion markets what they can and cannot do, these latest moves show the gross hypocrisy of the LBMA.”

In other words, the LBMA’s got some nerve “lecturing others about ethics and business practices when all the while some of the LBMA’s most powerful banks… have recently been prosecuted and fined for the manipulation of precious metals prices in both criminal and civil actions.”

More specifically, Mr. Manly refers to gold-market shenanigans carried out at JP Morgan’s and Scotiabank’s trading desks — both were fined for their deceptive practices this year. And they’re not alone: “In 2018, U.S. authorities (DoJ and CFTC) fined other LBMA heavy hitters HSBC, UBS and… Deutsche Bank for engaging in spoofing of precious metals prices.”

[Spoofing, you might recall, is when traders place buy and sell bids for precious metals and then cancel them before the bids are executed. The net result: creating the pretense of demand and, in turn, pumping up the prices of metals. Ready for a shower?]

Manly notes: “All of these banks are… the most powerful members of the LBMA.

“JP Morgan, Scotiabank, HSBC and UBS are four of the five members of the LBMA’s London Precious Metals Clearing Ltd. (LPMCL), the group of banks which clears all precious metals trades in the London market.”

Regardless, Jim Rickards says: “No doubt, the LBMA expects prompt compliance by the trading centers they have put on notice. But what comes next might surprise them…

“By monopolizing the gold market, the LBMA might (ironically) create a new rival,” says Jim.

“These powerful gold centers in Dubai, India, Turkey and China might band together and turn their back on LBMA by forming their own gold trading organization and setting their own rules.

“This could finally break the quasi-monopoly of the LBMA that has existed in various forms for over 100 years,” he says. The upshot? If Dubai and other trading centers can escape London’s clutches, gold will be more of a free market and the dollar price can rise.

“Investors in physical gold always need to be prudent about the quality of the gold they are buying and the integrity of the dealers they buy from,” Jim cautions.

“But competition in gold pricing can only help investors, since gold will be more likely to find its true level instead of being held within tight boundaries by the manipulators at the LBMA.”

[Ed. note: Jim Rickards is still standing by his “gold $15,000” prediction… and beyond. Now he’s uncovered a distinctive “MIDAS strategy” that might help investors make life-changing money in the gold market.

It’s all about a small corner of the precious metals market that nearly 99% of people have no idea exists… but is capable of generating returns up to 15x and 58x better than the price of physical gold over the next four years.

And Jim’s singling out 1% of readers for access to this opportunity today, so get the full details before midnight tonight. This might be your one shot to benefit from Jim’s out-of-the-box strategy.]

“We’ve been waiting for a washout like this for a while now,” says analyst Greg Guenthner. “The market had simply gotten too frothy, and it was overdue for a quick drop.

“Traders were too bullish, call premiums were through the roof… sentiment was definitely hitting a short-term extreme,” Greg says.

“We’ll have to see if this corrective move has legs,” he concludes. “Anecdotally, I could see the retreat extending into next week (just a gut feeling). Either way, it’s healthy action. Nothing to concern us just yet.”

It being Thursday, we’re obliged to feature our little chart of horrors, showing initial jobless claims vaulted to 853,000… which is unmistakably up from 712,000 claims last week. 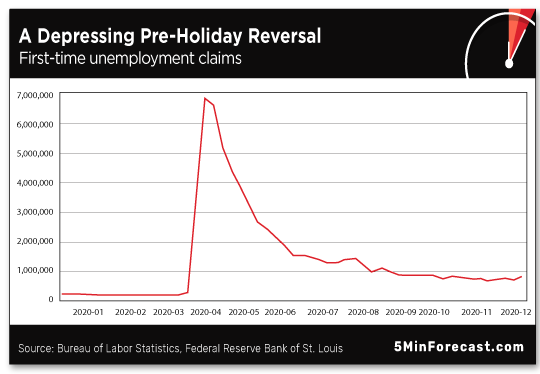 This week’s number also breaks above the 800,000 level for the first time in eight weeks.

Another economic number today? The wonks at the Bureau of Labor Statistics report the Consumer Price Index (CPI) increased 0.2% in November. But the annual pace of inflation remains unchanged at just 1.2%

ShadowStats pegs inflation, however, at 8.8% — down microscopically from the previous month.

“Wall Street is suddenly paying attention to a group of companies they’ve overlooked during the pandemic,” says income specialist Zach Scheidt, “And the trend is about to get even stronger,” he asserts.

“While investors were focusing on hot growth stories, plenty of other companies were quietly chugging along through the pandemic. They’ve managed to bring in in steady revenues and profits over the past few months,” says Zach.

“But since they’re not seeing record business, Wall Street didn’t care very much about them. The lack of attention makes them value stocks,” says Zach, “meaning their share prices are relatively low compared with their sales, earnings, net worths, dividends and more.”

“Since the start of the fourth quarter, value stocks have outperformed the S&P 500, Dow Jones Industrial Average and even the NASDAQ-100,” Zach reports. 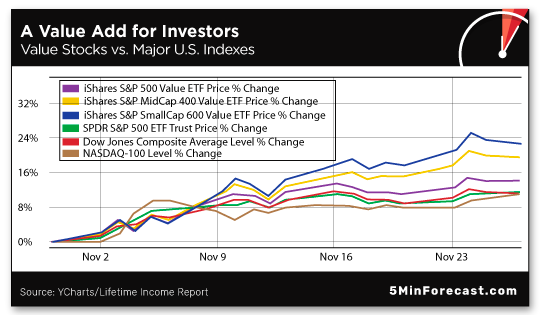 “It makes sense, though,” Zach says. “Growth stocks are too expensive, so investors need to buy something else,” he notes. “They want safety, too — companies that are worth much more than their current price.

“So I expect many [market] laggards to spring back as investors rotate out of growth stocks,” Zach concludes, “and big turnarounds for beaten-down value stocks.”

In proof people are exploring new hobbies as a result of COVID lockdowns, an amateur gardener unearthed a stash of 15th-century gold coins while weeding his garden in Hampshire, England.

“The coins… included 63 gold and one silver,” Sky News says. “They are thought to have been deposited around 1540.” 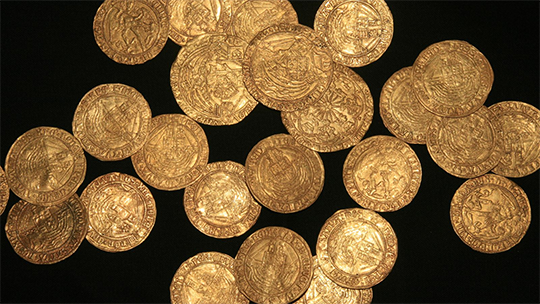 And the coins are unique, bearing “the initials of three of [Henry VIII’s] wives — Catherine of Aragon, Anne Boleyn and Jane Seymour.”

No word on the hoard's value yet, but it’s worth pointing out the find is just one of more than 47,000 discoveries registered with the British Museum's Portable Antiquities Scheme (PAS) in 2020.

Dust off the metal detector (if you’re *allowed* outside)…

A reader responds to yesterday’s episode of The 5: “While Gen. Mattis might have been on the board of Raytheon, he was also on the board of Theranos… which was quite a scandal and perhaps a black mark on his judgment.”

As far as we can tell, Mattis doesn’t have direct ties to Raytheon; instead, he’s served on the board at fifth-largest U.S. defense contractor, General Dynamics, both before and after his stint as Trump’s defense secretary.

And yes, “Mad Dog” Mattis would probably prefer to forget he was on the board of defunct blood-testing scam Theranos. He even advocated for the use of Theranos’ “technology” in the U.S. military. Oy…

But Mattis was one of several Theranos board members with ties to Washington: We see you, former secretaries of state Henry Kissinger and George Shultz. (For his part, Shultz didn’t heed repeated warnings from his grandson — an ex-Theranos employee — before the whole charade fractured.)

“Nobody on the board has been directly charged with anything,” Vox reported in 2019. “But accepting six-figure checks to serve as a frontman for a con operation is the kind of thing that would normally count as a liability in American politics.”

P.S. Our Ray Blanco has developed an all-new strategy to identify, in advance, which biotech firms are on the cusp of FDA approval for new drugs.

You can imagine how lucrative that could be, right?