We begin today’s episode of The 5 with a brazen attempt at butt-covering. We hope you’ll understand once we plead our case.

On any given day, we’re under a peculiar kind of deadline pressure.

In assembling our daily digest of uncommon knowledge, we aim to be as timely and up-to-the minute as possible. It’s a legacy of your managing editor’s 20 years in the TV news racket.

But given the nature of e-letters, there’s also a lag of at least 90 minutes between the time we finish writing and the time these daily missives hit your inbox. There’s copy editing, fact checking, HTML coding. We can do last-minute tweaks, but not major overhauls.

Rarely is that lag a big deal. But as we sit down to write this morning, we have a lingering apprehension that if we ignore one particular topic, we could look mighty foolish by day’s end.

If the U.S. Supreme Court takes up the Texas election lawsuit by day’s end, that could instantly slice 500 points off the Dow.

As you’re probably aware, the Republican attorneys general of 18 states — led by Texas’ Ken Paxton — have sued the states of Wisconsin, Michigan, Pennsylvania and Georgia.

They’re asking the U.S. Supreme Court to delay certification of a Joe Biden victory in those four states.

The clock’s ticking; after all, the Electoral College meets in the 50 state capitals Monday.

For the last month or so, Wall Street has settled into the narrative of a Biden presidency and split control of Congress, with Republicans in charge of the Senate. If that narrative is upset, the reaction will be swift and ugly.

For the last week or so, the media’s narrative surrounding the Texas lawsuit has followed a curious arc — first ignoring it, and then addressing it but saying it had a slim chance of success and today giving it as much airtime and bandwidth as the pandemic’s grim toll.

Kinda reminiscent of this meme going around conservative social media… 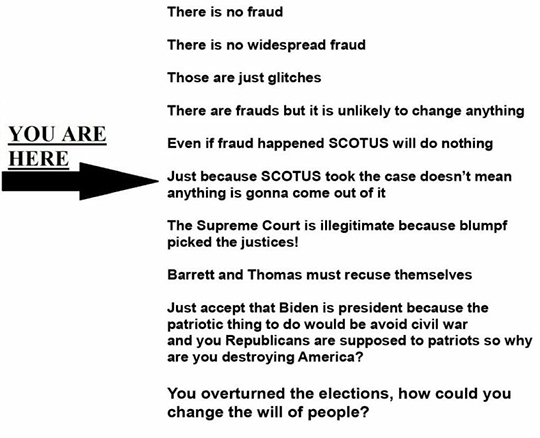 Anyway, by the time you read this, one of three things will have happened…

Thus, our attempt today to cover all our bases. Or our butt, as the case may be.

One more thought before we move on: The Texas suit lays bare the fair-weather federalism of many conservatives.

From Article II, Section 1 of the Constitution: “Each State shall appoint, in such Manner as the Legislature thereof may direct, a Number of Electors…”

Does Mr. Paxton — and do his supporters — really want to set the precedent of federal judges dictating how states must conduct their elections and choose their members of the Electoral College?

His fellow Texan, Republican Rep. Chip Roy, understands the perils — however sympathetic he is to claims of election shenanigans. “The case… represents a dangerous violation of federalism and sets a precedent to have one state asking federal courts to police the voting procedures of other states,” he tweeted yesterday.

Ohio Attorney General Dave Yost — a Republican who nonetheless opposes the Texas case — also understands. From his brief filed with the Supreme Court: “The relief that Texas seeks would undermine a foundational premise of our federalist system: the idea that the states are sovereigns, free to govern themselves… [N]othing in the Constitution empowers courts to issue orders affirmatively directing the states how to exercise their constitutional authority.”

Paxton is opening a Pandora’s box that conservatives may one day come to regret, mightily.

Anyway, as we write this morning there’s no decision and the major U.S. indexes are adrift.

Yes, final FDA approval of the Pfizer COVID vaccine could come by day’s end — but that news was “priced in” to the market days ago. The next boost to the market will have to come from somewhere else.

Gold is clawing and scratching its way back from the latest beat-down, now $1,843. Silver is 4 cents away from $24.

We don’t have much to say about Airbnb going ballistic upon its debut as a publicly traded company yesterday. Like DoorDash the day before, it sailed up to more than double the IPO price.

It’s all enough to prompt the Financial Times to wring its hands about “comparisons with the internet bubble”… but as staggering as the Greenspan Fed’s money printing was back then, it doesn’t hold a candle to the Powell Fed now. And it’s fair to say this bull market has yet to reach its mania stage…

From our New Cold War annals, we see Joe Biden’s pick for U.S. trade representative is no friend of China.

She’s Katherine Tai, second-generation Taiwanese-American and a total D.C. swamp creature who’s gone back and forth between government and lobbying gigs.

The view from mainland China? “Under Biden, Tai could be instrumental in implementing the strategy of recruiting allies and ganging up on China at the WTO,” Wu Xinbo of Fudan University tells the South China Morning Post. A government adviser and professor at Renmin University calls her nomination a “negative signal.”

As we noted last week, tariffs on China are one Trump policy Biden is in no hurry to undo.

Quips the economics blogger Robert Wenzel, “I wonder if the Chinese still think the millions they gave Hunter Biden was a good investment.” Heh…

Amazon just called BS on the scam that is higher education in these United States.

Yesterday the company announced an initiative to train 29 million people worldwide to work on cloud computing. Some of them might end up working for Amazon Web Services; others might work for companies that rely on AWS.

No word how many of those 29 million will be here in America, but you’d have to think the number is substantial.

“We need our customers to have the right skills if they’re going to go through a digital transformation,” says AWS vice president Teresa Carlson. She says her company hears daily from clients who can’t find people to fill one or another technical position… and so Amazon will step into the breach and pick up all the costs itself.

With Amazon’s announcement, a 75-year era in which higher education has been a glorified job-training program comes to a close.

It began with passage of the GI Bill, subsidizing college for troops returning home from World War II.

Big Business loved it; they could slough off their job-training costs onto the university system. For students, “getting your ticket punched” became the main goal of higher ed; more lofty pursuits like absorbing new ideas and broadening one’s horizons took a back seat.

➢A few years ago, Wisconsin’s then-governor Scott Walker sought to alter the University of Wisconsin’s century-old mission statement about improving “the human condition” and “the search for truth” — substituting the more prosaic goal of meeting “the state’s workforce needs.”

Walker backed off quickly — folks in the Badger State are rather fond of “the Wisconsin Idea” — but all he was doing was acknowledging the crony-capitalist realities of the day.

Of course, the pandemic has done much to upend this model for higher ed. Students are taking classes via Zoom but still paying tuition as if they’re getting in-person instruction. They’re rightly questioning the “value proposition.” As we noted in August, one in five students enrolled in the 2019–20 academic year did not re-enroll for 2020–21.

Now Amazon is making it plain: It can’t rely on the university system to train up quality employees, so it will take on the task itself.

Gee, what a shame that all those assistant provosts and vice chancellors and associate deans might have to go find real jobs…

To the mailbag: “Your last line from Wednesday’s email, ‘Really, it’s not a swamp, it’s a cesspool,’ made me think of the last line in the old rock song by The Who ‘Won't Get Fooled Again.’

“Love The 5. Thanks for all the info. I've tried to stop reading because I have so many other things to read, but The 5 is one of my guilty pleasures.”

The 5: Well, as long as you brought it up, we can rant about the cesspool and Raytheon and Gen. Austin one more time.

On Wednesday, the Senate took up a measure to block the sale of $23 billion in weapons to the United Arab Emirates.

The UAE, along with Saudi Arabia, has been waging a genocidal war in Yemen since March 2015. The UN reckons the death toll at 233,000 — that’s airstrikes, starvation sanctions, cholera outbreaks, the works.

Both Barack Obama and Donald Trump have aided and abetted this genocide — directly with targeting assistance from the U.S. military and indirectly with weapons sales.

Raytheon is a major supplier of the bombs being dropped on Yemen. It is also one of three contractors — along with General Atomics and Lockheed Martin — that stand to collect the lion’s share of that $23 billion weapons sale.

A few senators with some semblance of moral compass tried to stop the deal. But with no luck. “A vote to block the sale of F-35 jets failed 47-49, and a separate vote to block the sale of the drones failed 46-50,” reports The New York Times — “with Sens. Mark Kelly and Kyrsten Sinema of Arizona, both Democrats, voting in favor of the drone package. Mr. Kelly opposed the F-35 sale.”

We don’t mean to pick too much on Gen. Austin, by the way. The other two finalists for Pentagon chief had their own seamy connections.

“It’s not too much to ask,” writes Sarah Lazare at In These Times, “that ‘public servants’ elevated to the highest echelons of power not take over agencies that regulate and patronize the corporations they were well-compensated board members of weeks before taking office, and will likely be again once they leave office in a few years.

“Even setting aside ideological opposition to U.S. empire or the inertia of violence that defines U.S. militarism across the globe, basic good-government types can see the inherent conflicts of interest in the revolving door between industry and government.

“This revolving door was simply taken for granted in Biden’s defense secretary sweepstakes.”

P.S. We’ve gotten many words of praise from readers in our near-14 year existence, but today might be the first time The 5 has been described as a “guilty pleasure.”