When a ginormous life insurance company plunks down $100 million to invest in Bitcoin, something’s going on.

Days ago, MassMutual bought 5,470 bitcoin at a price of $18,279 each. Its objective — achieving “measured yet meaningful exposure to a growing economic aspect of our increasingly digital world,” said a company statement to the Cointelegraph website.

Granted we’re talking about 0.04% of MassMutual’s general investment account. A drop in the ocean. Can’t take too many risks with life insurance money, y’know.

But as long as interest rates will remain at rock-bottom levels for years to come, why wouldn’t an insurance company — or a pension fund — take a flier on Bitcoin right now?

Analysts at JPMorgan Chase say MassMutual’s move is blazing trails for other institutional investors to move into Bitcoin.

“One can see the potential demand that could arise over the coming years as other insurance companies and pension funds follow MassMutual’s example.”

They did a little back-of-the-envelope math: If pension funds and insurance companies in the United States, Europe, Britain and Japan plowed 1% of their assets into Bitcoin, it would add up to $600 billion in new Bitcoin demand.

The JPM analysts go a step further: Bitcoin’s gain would be gold’s loss.

➢ Fair warning if you’re a longtime reader: The next minute or two of our 5 Mins. today might offend you. Indeed, you might find it as offensive as the day in early 2013 when our chart hound Greg Guenthner declared gold to be in a bear market. (On that day, It broke below $1,550 — on its way down to $1,050 less than three years later.)

“In an increasingly volatile world, where should investors look for safety — Bitcoin or gold?” asks our Robert Williams.

This year, Mr. Williams launched a new technology-oriented newsletter at our firm — Future Wealth, it’s called — at what seemed like the most inauspicious time ever. It was last April, when it was no sure thing that the corona-crash was over.

His readers have to be exceptionally pleased — with gains of 144%… 212%… even 344%. All since launch eight months ago. Far outstripping the overall tech rally this year. Not bad for a $49-a-year publication, no?

It’s Bob who presented us with the bold proposition in August that Tesla does not seek to dominate the electric vehicle space. Instead, Tesla sees EVs as merely a leverage point to achieve dominance in the far more lucrative pursuit of self-driving technology — in much the same way that Amazon leveraged book sales into dominance of online retail. (TSLA has doubled since then. Just sayin’.)

So back to Bob’s question…

First, the scarcity case for Bitcoin: “Only 21 million bitcoins exist, of which 18.5 million have been mined — meaning nearly nine out of every 10 bitcoins that will ever exist are already in the supply. It’s estimated that the last bitcoin will be mined on May 7, 2140.

“Bitcoin’s finite supply makes it an attractive hedge against the ever-expanding U.S. dollar.

“See, since the Federal Reserve can print new dollars anytime — with no shortage of printer ink for the presses — the value of a dollar erodes over time.

In contrast, “there’s no central bank deciding anything for Bitcoin… only an algorithm programmed to cease after minting 21 million coins. Therefore, Bitcoin becomes increasingly rare and valuable with every passing day.”

Right, you say. You get that. So what’s Bitcoin got that gold doesn’t?

“The difference is technology,” Bob submits — “a difference that gives Bitcoin a profound advantage in price performance as the 2020s progress.”

Hear him out: “An investment in physical gold is also an investment, by proxy, in the equipment needed to extract gold from the ground — bulldozers, rock trucks, water pumps, generators, belts, diesel engines and wash plants. You’ll notice they’re all representative of the analog world built by the baby boomer generation. It’s a world no longer valued among Wall Street, venture capitalists and brokerage houses.

“Bitcoin, to the contrary, is symbolic of the digital world. As it follows, an investment in Bitcoin is also an investment in its underlying technology — sought-after breakthroughs like blockchain, universal connectivity, semiconductors, quantum computing, tokenization, 5G and data warehousing/storage. This amalgamation of Bitcoin’s workhorse assets is called ‘fintech’ (short for financial technology)… and fintech easily ranks among the market’s hottest industries.

Conclusion: “Boiled down to its very essence, the debate between Bitcoin and gold is a simple battle of analog versus digital. And as the 2020s will demonstrate, analog doesn’t stand a chance.”

The cool thing is you don’t have to agree with Bob to make money following his recommendations. And right now, he’s only days away from unveiling his blockbuster forecasts for 2021 — forecasts that should prove at least as profitable, if not more, than 2020’s.

Watch this space in the days ahead. And in the meantime, ponder that you don’t have to choose between Bitcoin and gold. You can do both to hedge your exposure to an ever-depreciating U.S. dollar.

Gold and Bitcoin are both in the green as we turn our attention to the day’s market action.

Crude has been on a tear this week. As we write a barrel of West Texas Intermediate fetches $47.50 — another high-water mark since the corona-crash began in March.

The big economic number of the day surprised to the upside: The Federal Reserve says industrial production grew 0.4% in November — a hair more than expected. Big gains in output for vehicles and aircraft made the difference.

Way too soon to break out the Champagne, though — industrial production is still down 4.9% from pre-pandemic levels in February.

Meanwhile, the “cap ute” number continues its slow climb back: 73.3% of the nation’s industrial capacity was in use during November… 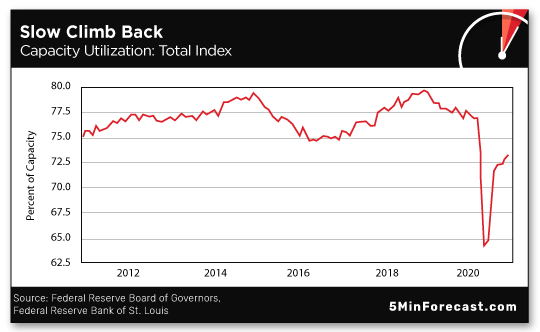 … but that’s still lower than any pre-pandemic month in the last decade.

They kept it under wraps as long as they could… but the vampire squid’s tentacles are reaching into the Biden administration.

“Goldman Sachs Vets Quietly Added to Biden Transition,” says a Politico headline. With no fanfare, Goldman vice president Monica Maher has been named to the “agency review team” for the National Security Council. In addition, Goldman employee Eric Goldstein is on the review team for Homeland Security. Supposedly they both have expertise in cybersecurity.

➢ Quip of the day: Left-populist writer Matt Stoller tweets, “It would have been downright rude if only Google and Facebook quietly got their insiders on the Biden landing teams.”

As you might recall, Trump’s Treasury Secretary Steve Mnuchin is a Goldman guy. So was his first director of the National Economic Council, Gary Cohn.

Politico reminds us Goldman “alumni have populated Democratic and Republican administrations alike for nearly a century.” But clearly the public perception is that it’s becoming more toxic — on both the left and right, we daresay.

Not so much with BlackRock — the world’s biggest asset manager and keeper of the iShares family of ETFs.

This isn’t exactly new, but we should note that two higher-ups at BlackRock have been named to key positions in the new administration: Adewale Adeyemo will be No. 2 behind Janet Yellen at the Treasury Department… and Brian Deese will be director of the National Economic Council.

Of special concern is that Deese’s job at BlackRock was to oversee the company’s “sustainable investment strategies.” Nothing good happens when high finance meets climate change. We’ll be watching…

"Well, 'someone' looks foolish… and it’s not you, Dave," a reader writes.

“Your logical and rational rebuttal of Scrooge McDuck was superb. And hands down: ‘Huge portions of the Constitution have been a dead letter for decades’ — puts the icing on the cake. LUV THE 5.”

The 5: Actually, there was a fellow who took great exception to that remark and launched into a screed about “judicial activism” that would have taken a full 2:00 of our 5 Mins. We daresay he misunderstood — we’re not rejoicing in the fact that huge portions of the Constitution are a dead letter, we’re just recognizing reality.

With that, we’re going to gently close the door on any further discussion of the election outcome. We don’t see any good that can come out of it.

What we do see is large numbers of conservatives descending into the same delusional trap many liberals did over the last four years.

Remember how every teensy new development in one or another investigation against Trump was supposed to lead to his certain downfall? “The walls are closing in!” was a constant liberal refrain. The absurdity was brilliantly captured by the satire website ClickHole while Special Counsel Robert Mueller’s shop was still open… 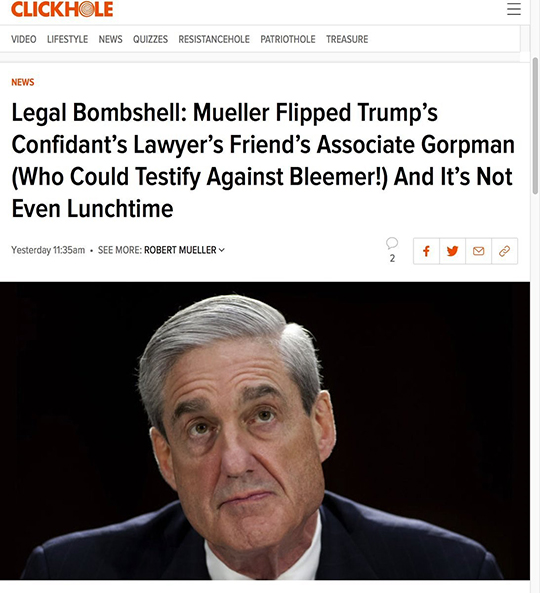 And now, today, even after the Electoral College did its thing, I can look at conservative websites and be told with a straight face that Trump is going to invoke a 2018 executive order and the Insurrection Act to somehow stay in office past Jan. 20 — and it’s all part of an ingenious plot to stimulate rioters to destroy “Democrat-controlled cities.”

But it’s been building slowly to this farcical stage for nearly 60 years.

We cited the veteran D.C. journalist Sam Smith in 2015, and again last year after Jeffrey Epstein’s purported suicide: “The unresolved major event is largely a modern phenomenon that coincides with the collapse of America's constitutional government and the decline of its culture.

“Beginning with the Kennedy assassination, the number of inadequately explained major events has been mounting steadily, and with them a steady decline in the trust between the people and their government.”

There was another section of Smith’s essay we didn’t cite at the time, but that seems relevant today: “But critics who insist on ill-formed conclusions actually play into the hands of those in power who happily use the most extreme hypotheses to ridicule all doubt and questioning.

“This has happened with virtually every unsolved mystery of recent times. The serious remaining questions are thus obscured or lumped with the unreasonable.”