“Alarm bells!” says precious metals analyst Ronan Manly, who describes himself as an observer of “what's going on in the London gold market and the gold activities of central banks.”

Now Mr. Manly comments on an issue we’ve speculated about for nearly as long as we’ve been publishing: How much gold really backs GLD?

And in the interest of transparency, State Street is required to submit Form 10-K — a yearly financial disclosure to the Securities and Exchange Commission (SEC) — and to make the report available to GLD investors.

Here’s where things get palace intriguey: Principal Financial and Accounting Officer (CFO) Brandon Woods, who signed off on this year’s 10-K, had only been CFO for one day; meaning, Mr. Woods had barely settled into his C-suite office when he was required to authorize the GLD filing.

Not that there’s anything especially odd about that… 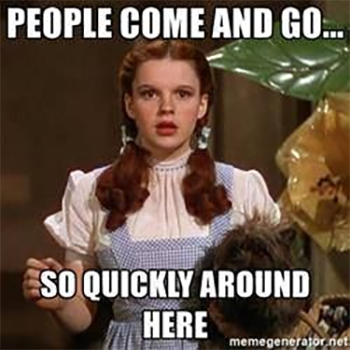 Pay no attention to what’s behind GLD’s curtain…

Considering GLD is the world’s largest gold-backed ETF — and presumably the pay is stellar — CFOs are a dime a dozen. “There have now been a staggering six (6) chief financial officers… since early 2014,” Manly notes. “Surely this must be some sort of record?”

He continues: “A constant in all of this CFO turnover is that according to the SEC filings of GLD… the CFO departures ‘did not arise from any disagreement on any matter relating to the operations, policies or practices of the SPDR Gold Trust.’

“But they would say that, wouldn’t they…

“We all know instinctively that mass turnover by CFOs in a company is a potential warning sign that all may not be as it should be,” Manly says.

Even more pertinent: “Why did the CFO resign one day before financial-year end and not put her name to the annual 10-K submission to the SEC?”

Why indeed? While this might be standard fare at some here-today-gone-tomorrow operations, we’re talking about the world’s largest gold-backed ETF here!

The 10-K “report… leaves out some critical information about the GLD Trust’s one and only asset,” Manly says, “i.e., its gold holdings.

Manly points out how this is a major divergence from standard operating procedure since “all of GLD’s gold [had been] held in the London vaults of the GLD custodian HSBC.”

And without getting too technical, there appears to be a “concealment of details and a lack of numerical data about the GLD gold held at the Bank of England,” according to Manly.

“Instead of precise language,” GLD “substituted the word ‘some’ in place of numerical quantities…

“No CFO worth their salt would permit a document submitted to the SEC to use the word ‘some’ in reference to quantities,” Manly argues, “unless of course, they were trying to hide something.”

Mr. Manly isn’t the only one who finds the 10-K report more than a little “disturbing”…

“The bottom line [is] whether GLD holds the physical gold they are required to hold based on their assets,” Jim Rickards says, “and whether that gold actually exists in the vaults of its customary custodian.

“These questions involving gold holdings at GLD and the Bank of England arise at the same time when we know Comex has been draining gold from the U.K. to fill its own designated vaults,” Jim continues.

“[This] against the possibility that gold futures contract holders may demand physical delivery rather than closing out or rolling over contracts as they customarily do,” Jim says.

“Without jumping to conclusions, these indications of physical gold shortages at Comex, GLD and the Bank of England all point toward the long-awaited crack-up of the paper gold market based on a shortage of physical gold to meet all of the contractual obligations outstanding.

“That’s OK as long as the contracts remain open and are not physically settled. But if a ‘show me the gold’ mentality takes hold, this paper pyramid will collapse quickly.

“We’re not forecasting a paper gold collapse in the short run,” Jim clarifies. “[But] we are pointing to stress in the paper gold markets as one more reason why demand for physical gold will remain strong.”

[Editor’s note: One of the best ways we know to steer clear of the paper-gold house of cards — while reaping the benefits of an IRA — is to set up an amazing tax-deferred or tax-free gold IRA with Hard Assets Alliance.

You might not be aware you can apply those retirement and tax advantages to real, physical precious metals, but the process is as easy as trading stocks. And it only takes 10 minutes to set up and fund an account.

Other highlights when working with Hard Assets Alliance? It’s easy to use, offering low prices with full replacement insurance. Best of all, HAA is with you every step of the way.

As always, please note Agora Financial purchased a stake in Hard Assets Alliance; you can assume our firm will receive some sort of compensation if you choose to do business with the HAA.]

Quantitative analyst Jonas Elmerraji says: “If I told you a year ago that we’d be staring down a global pandemic, horrendous unemployment numbers, lockdowns and business failures…

“… and the stock market would be up double digits in the year ahead, you’d think I was nuts.” That said, “for Mr. Market, 2020 has been an unqualified success!”

Jonas continues: “Since the calendar flipped to January, the big S&P 500 Index has charged more than 14% higher on a price basis.

“Of course, the wild card here has been the Fed,” says Jonas. “The correlation between the stock market rally and the central bank’s balance sheet has been near-perfect… 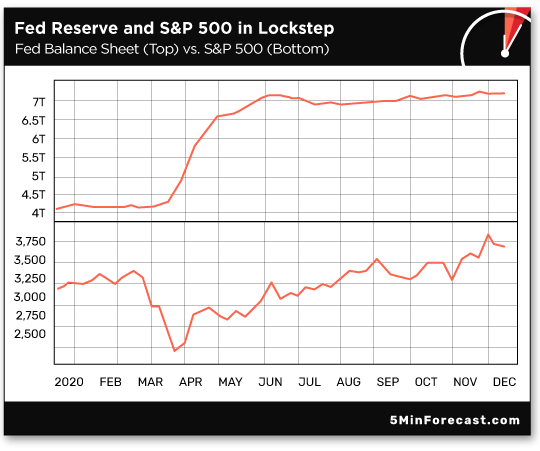 “The Fed started aggressively expanding its balance sheet as stocks sold off during the initial COVID-19 crash,” Jonas notes, “and the constant buying pressure has kept the stock market’s rally alive.

“The takeaway for investors has been clear-cut: No matter what happens in the economy right now, the Fed is positioned to keep driving stocks higher,” says Jonas, “That remains the play for 2021.”

And taking into account the Fed promised yesterday to keep rates a smidge above zero and to continue its bond-buying binge, what’s the likelihood of a Santa Claus rally? Jonas says: “Chances look good for Santa… eh, Jay Powell… to fill investors’ stockings for the rest of December.”

Behold the little chart of horrors… 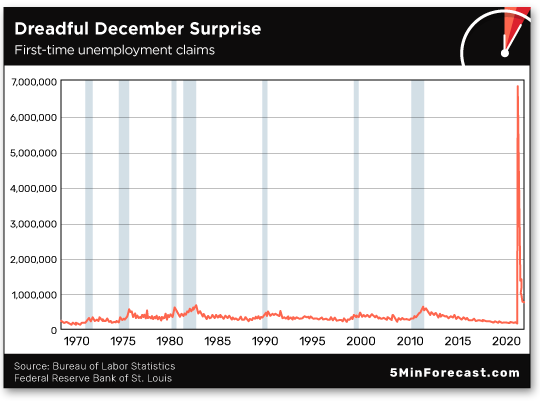 … that shows initial jobless claims vaulted to 885,000 for the week ending Dec. 12 — the highest number in more than three months.

What’s this about a V-shaped recovery?

“When it comes to your retirement investments,” says our wealth and income expert Zach Scheidt, “it’s time to start looking forward to next year.”

In light of which, Zach details three opportunities for retail investors to capitalize on a trend that will continue into 2021: “The U.S. dollar is trending lower,” he says. “It’s a major shift that could take years to complete.

“But a falling dollar also boosts profits for U.S. companies with international sales.

“When these companies book profits in Europe, China or South America, the profits are still reported in U.S. dollars,” Zach says. “Since the dollar is weak, stable profits from overseas will result in growing profits on U.S. dollar terms.

“Johnson & Johnson (JNJ),” for example, “generates almost half of its revenue outside of North America.” Not to mention: “The stock is a decent value play, trading for just 17 times next year's expected earnings,” says Zach.

“Shares pay a 2.6% dividend yield.” Plus: “The stock looks poised to break out above a key $155 resistance point,” Zach says, “which could be the catalyst for much larger gains.”

Another U.S. company with global reach? “Ford Motor Co. (F) is growing its Latin American and Chinese presence and already has a healthy business in Europe,” says Zach.

While the company’s dividend has been suspended this year, “Ford is a great value stock, trading at just 8.5 times next year's expected earnings.” And Zach notes: “Shares have been gaining momentum… That momentum should continue — helped by the weak U.S. dollar.”

Last? “Agricultural equipment powerhouse — Deere & Co. (DE) — sells equipment that will help with infrastructure projects. As governments around the world beef up stimulus plans (including infrastructure spending),” Zach says, “DE's equipment will be in high demand.

“Shares trade for just 16.5 times next year's earnings,” he notes, “a good value compared with the broad market.”

But Zach offers this warning: “A falling U.S. dollar will erode the value of cash you're holding in your account — so be cautious!” Instead, because interest rates are wreaking havoc on savings accounts, Zach recommends these and other value stocks with income-generating potential.

“If Bitcoin were the be-all-end-all that some people on Twitter would lead you to believe,” a reader says, “then there wouldn't be 5,000 different cryptos…

“I don't understand how various newsletters promoting cryptocurrency are recommending cryptos other than Bitcoin. That shows me Bitcoin isn’t the only game in town, and that no one really knows which one will have the staying power to last a lifetime… or at least over 5,000 years like gold.

“At this stage, I think all cryptos are just trading vehicles and not to be used for a store of value. I believe in blockchain and cryptocurrency, but I’m investing in public companies that will go up exponentially more than Bitcoin. I’ll use my fiat currency and invest in public companies, which will give me 5x my money while Bitcoin goes from $20,000 to $30,000.

“Once the world has truly recognized one crypto — or a limited number of cryptos — that can be used for daily expenses and/or for a store of wealth, then I will convert my fiat. But until that day comes, I will be holding paper gold, silver ETFs and miners.”

The 5: Errr… perhaps not paper gold? But we’re not recommending you go all in on Bitcoin either. For your amusement today… 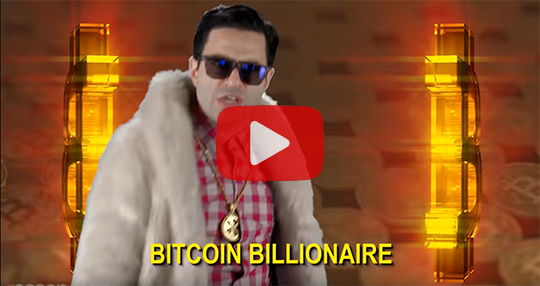 Another crypto opinion: “I read your Bitcoin vs. gold piece a couple days ago.. and the feedback you got hit with. I just wanted to point out another difference between Bitcoin and gold; I think it’s worth mentioning…

“But if you believe market forces ultimately prevail, the retail investor (i.e., your reader) would do better buying the dips in gold… and has a better chance of success when the market finally overcomes the DOWNWARD manipulation. However, the same investor has a better chance of getting creamed when the UPWARD manipulation in Bitcoin prices ultimately yields to market forces.

Evidently, the Moby Dick of Bitcoin whales is submarining through the market today… Back with more of The 5 tomorrow.

P.S. If you’ve followed Jim Rickards — or The 5 — you know Jim recommends every American put 10% of their wealth in gold.

But something is happening right now that might result in profits HIGHER than what you’d get investing in gold bullion alone.

With Jim’s background as a financial analyst, and as someone who’s written about gold for years, he knows the difference between hype and real opportunities in the gold sector.

Because, just in time for the holidays, this information might be a true game-changer for millions of Americans.