Almost no one noticed at the time… but shortly after Election Day, Joe Biden committed Americans to die for the sake of a few barren rocks in the East China Sea.

As he accepted a congratulatory call from Japan’s Prime Minister Yoshihide Suga, Biden promised he would apply Article 5 of the Japan-U.S. Security Treaty to the Senkaku Islands.

These uninhabited islands are controlled by Japan — and claimed by both Japan and China.

The conflict is old — going back to the First Sino-Japanese War of 1894–95 — and Biden’s commitment isn’t altogether new. Eight years ago, Japan and China were trading rhetorical barbs over the Senkakus. In our virtual pages, we cited a Boston College professor who warned, “The United States risks getting involved in hostilities over strategically irrelevant and economically marginal islands.”

What’s new is pinpointed by Pat Buchanan in his syndicated column: “Biden has removed any ambiguity that may have existed and given Tokyo a U.S. war guarantee that covers the Senkakus.”

And that’s still not good enough for the China-bashers inside the Beltway.

We return this morning to the topic of the New Cold War — a conflict we see lasting far beyond the Trump administration, a war we pray will never turn hot. Beijing does have nukes, after all, even if they’re not as numerous as Washington’s or Moscow’s.

According to Politico, Biden’s nominees will be barraged with China questions during their Senate confirmation hearings. And not just the obvious ones like secretary of state or defense.

“Every U.S. official has a role to play,” says Sen. Marco Rubio (R-Florida), “because the national security threats posed by the Chinese Communist Party to the United States cut across all aspects of our society, our economy and our government.”

And then there’s Rubio’s colleague from Arkansas, citing a former secretary of defense…

“Panda huggers”?! Gee, that’ll contribute to a healthy, non-McCarthyite dialogue in these United States, no?

Democrats believed Russian “meddling” put Trump in the White House, despite a paucity of evidence. They relentlessly pounded him as “Putin’s puppet.” And Trump reacted to that rhetoric by trying to out-hawk them: He tore up arms control treaties with Moscow. He permanently stationed U.S. troops on Russia’s borders. He sent lethal weaponry to Ukraine — a reckless step Barack Obama refused to take. 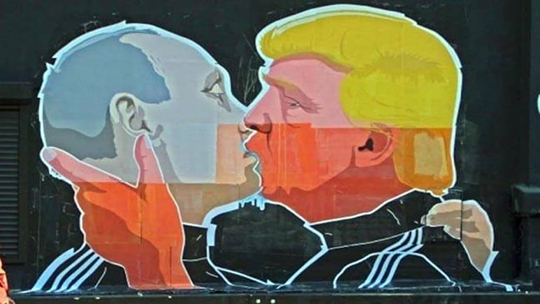 Now the shoe is on the other foot. You don’t have to look far on social media to find conservatives sharing memes like this… 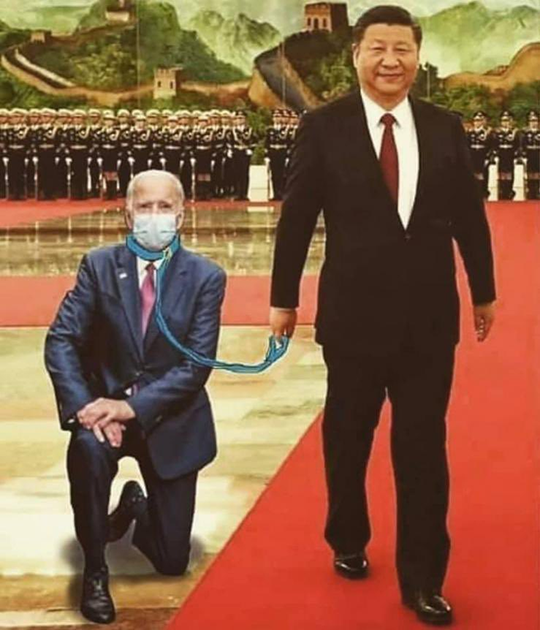 Throughout December — and especially since the Electoral College results on Dec. 14 — we’ve seen a growing narrative among conservatives on social media that Biden’s victory was not only fraudulent, but that it was orchestrated from Beijing.

And while few elected Republicans go so far as to parrot that rhetoric, they don’t have to. They can keep conservatives whipped up by talking about a “China litmus test” for Biden’s Cabinet picks — and smearing anyone who doesn’t meet the test as a “panda hugger.”

None of these developments is good for world peace… but they’re great for defense stocks. 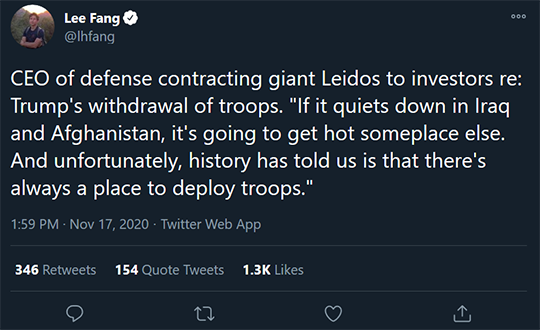 Shortly before the election, the CEO of Raytheon told CNBC it was “ridiculous” to think a Biden administration would slash defense spending. Little did he know one of his own board members, the retired Gen. Lloyd Austin, would be Biden’s pick for defense secretary. (Or did he?)

In early August, we mentioned the SPDR S&P Aerospace and Defense ETF (XAR). At the time, it was trading under $88. We mentioned it again a few days after the election, when it was a little under $97. This morning, it’s approaching $115.

We still like XAR as a broad-based defense play instead of the more popular ITA. ITA’s top holding is Boeing, and Boeing has a huge civilian aircraft component. Yes, the 737 MAX is flying again, but demand for air travel will remain in the dumps for years. Boeing doesn’t even rank in XAR’s top 10 holdings.

After a retreat from record highs yesterday, the major U.S. stock indexes are back in the green today.

As we write, the Dow is turning in the strongest performance — up six-tenths of a percent to 30,513. The Nasdaq is the laggard, up barely a quarter percent at 12,886.

Bitcoin is back on the rally tracks and approaching $28,000. The buzz in the crypto markets the last 24 hours is about Carolina Panthers offensive lineman Russell Okung supposedly collecting half of his salary in Bitcoin.

Which isn’t exactly true: The team will deposit plain ol’ fiat dollars in the Bitcoin platform called Zap, which will then convert the dollars to Bitcoin. But that’s not nearly as exciting as THE FIRST PRO ATHLETE TO BE PAID IN BITCOIN. Props to whoever handles Zap’s PR for suckering legions of reporters and editors desperate for clickbait during a slow news week…

We interrupt this year from hell for what might be good news.

The number of startups in the United States has surged in 2020. Per the Census Bureau, business formation applications during the third quarter were 82% higher than the same quarter last year. 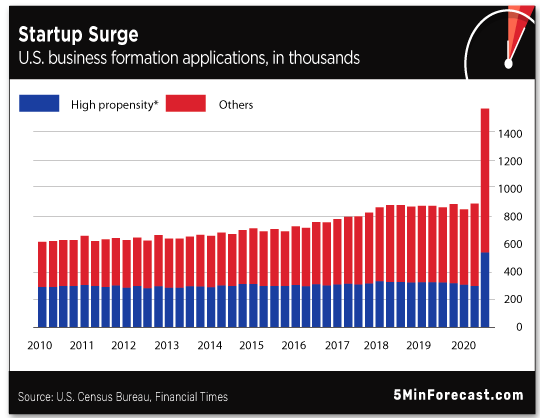 Chalk it up to enterprising people responding to a changing marketplace amid a pandemic… to say nothing of laid-off workers striking out on their own.

This is all good. We’re fond of citing a landmark study from 2011 by the Kauffman Foundation: “Without startups, net job creation for the American economy would be negative in all but a handful of years” since 1980.

Of course, the flip side is all the businesses that have gone belly-up this year. 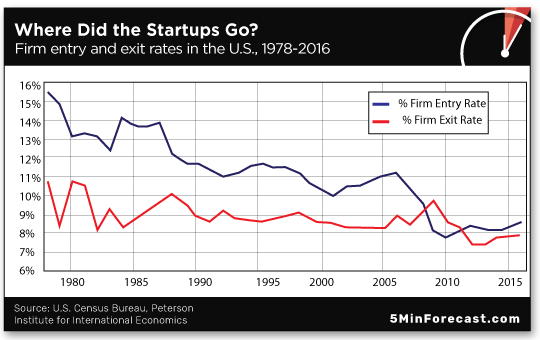 For a while during the “Great Recession,” more firms were going defunct than coming into existence. Awful.

As you see, the numbers end in 2016. We won’t get the 2020 numbers until at least 2022. Both of those lines will spike big-time… and we fear that once again the red line will be higher than the blue one. 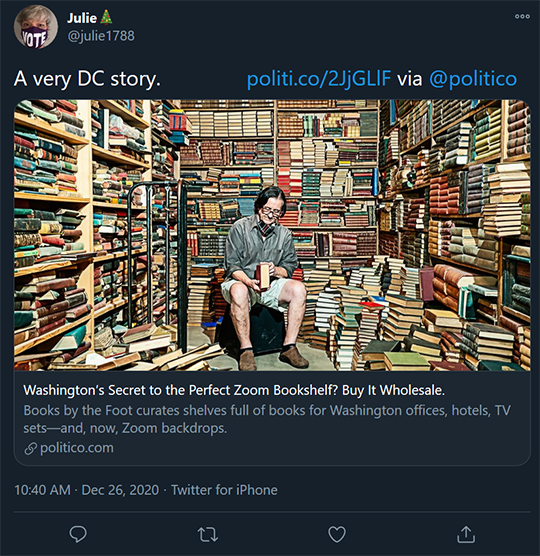 From Politico Magazine: “Books by the Foot, a service run by the Maryland-based bookseller Wonder Book, has become a go-to curator of Washington bookshelves, offering precisely what its name sounds like it does.”

This year, its typical customer base of offices and hotels shriveled to near nothing. But it’s made up for the loss with… government employees and contractors who want to look like they’re well-read on their Zoom calls.

Or as a New York Times writer (of course) put it earlier this year, “For a certain class of people, the home must function not only as a pandemic hunkering nest but also be optimized for presentation to the outside world.”

The “credibility bookshelf,” she called it.

This is our governing class in 2020. Fake people spending fake money on a fake backdrop of real books. Gawd…

More reader feedback to our “meta” edition of The 5: “Your explanation of ‘who we are’ was very helpful. It does help me better understand your aggressive marketing strategy.

“I've made quite a bit more than I've paid for Agora services this year, and so please take my comments and question below as coming from a satisfied customer rather than a complaint.

“I have two suggestions, though, for your marketing team. First, you need to mix things up a bit. Every pitch is exactly the same. Hey, please watch this video that will never be seen again… until it appears again next week. Hey, look at these five great returns this strategy achieved. What would you do with money like that? Guess what? This service is worth $10K, but we'll give it to you for $1K. OK, you signed up, now sign up for life for just $1K more!

“Look, I'm sure you've tested this strategy and determined it works, and you did get me to sign up, but after a while it does get annoying to see the same thing over and over again. It makes it hard for me as a customer to distinguish your editors and their strategies because they all start sounding exactly the same. The other thing I'd really like to see, which would go a long way toward making you look less like a scammy fearmonger, would be to show your editors' cumulative total return over time, not just their winning trades.

“I also had a question. If your editors cannot take a position in their recommendations, is their pay tied somehow to the performance of their strategies? I get that you don't want editors front-running your readers, but at the same time it does concern me that editors aren't putting their own $$ where their mouth is, so to speak.”

To be sure, there are competitor firms where the editors “eat their own cooking.” Long ago, our leadership team weighed which approach to take. They opted to keep church and state separate, and an editor cannot hold a stake in his or her recommendations.

And so it’s not unusual for an editor’s compensation to be tied to some metric of either sales or profits of the publication(s) in their purview.

That’s not a direct tie to “the performance of their strategies.” But it is an incentive for them to generate high-quality ideas that can 1) be transformed into a sales promotion that gets readers in the door and 2) keep those readers engaged after the sale. And obviously if their strategies are a dud, subscribers won’t renew and their compensation will suffer accordingly.

Yes, the sales “hooks” that prove successful tend to get copied. Some of them are timeless. Others are trendy and eventually they get tired. Some of the techniques you describe have had more “legs” than I thought they would.

But that’s the thing about the marketplace — or to use the Greek word that inspired the name of our parent firm, “the agora.” You can never take for granted what it is that people will respond to — and oftentimes you’ll be surprised. Keeps us on our toes, for sure…

P.S. Oh, and to the reader’s concern about “cherry-picking” an editor’s track record: Going into 2021, you’ll be seeing more about both winners and losers. It’s been an ongoing discussion within our firm for a while now.

We’re back tomorrow with a best-of edition that helps put the decade gone by into perspective — bookending the “Great Recession” of 2007–09 and the “Great Disconnect” of the economy and financial markets this year.

Monday we’ll get underway with our editors’ 2021 predictions. Up first — Jim Rickards’ outlook for a Biden administration’s impact on the economy and markets.

Until then, we thank you for your readership and your trust — which we know we have to earn anew every day.