“A proper analysis of Biden administration policy requires us to ask: Who is really in charge?” says our macroeconomic maven Jim Rickards.

Happy New Year and welcome to the rollout of our team’s 2021 predictions.

We’ll be covering a lot of ground all this week and early next — from tech to biotech to commodities to potential 401(k) changes.

But there’s an ever-present backdrop of politics and the pandemic — which seems like the obvious place to start.

Disclaimer: We’re going to proceed today on the assumption that Joe Biden will occupy the Oval Office in 16 more days.

Yes, Democrats are wailing about how Trump’s incoherent phone call to Georgia’s secretary of state amounts to an attempted coup… while Trump’s partisans still hold out hope the kraken will be released, granting him a second term after all. As if he has the discipline to pull it off.

And yes, on Wednesday when a joint session of Congress convenes to finalize the electoral votes, several Republicans will raise objections — the better to shore up their base and make it look like they “fought when it counts.”

But it’s all theater. Almost no one remembers anymore, but 16 years ago Democrats claimed the vote in Ohio was rigged against John Kerry. A Kerry victory in the Buckeye State would have made George W. Bush a one-term president.

Sen. Barbara Boxer (D-California) raised a formal objection during the proceedings in early January. Several of her colleagues offered lip-service support. “I commend and thank our friend for giving us this opportunity,” said Ted Kennedy. Barack Obama, then in office only three days, observed that many Americans wondered “whether our processes are fair and just.”

But feel-good jawboning was as far as it went. We suspect events in Washington on Wednesday will play out much the same way. Your editor is prepared to dine on a substantial helping of crow if said events play out otherwise.

So back to Jim Rickards’ question: Who’s really in charge?

The striking thing about the team Biden has assembled is that it looks like Barack Obama’s third term — even more than you might expect.

You can go anywhere on the web to find a list of the names so far. But those lists won’t fully reveal the clubby nature of Biden’s picks.

Aside from being alums of the Obama admin, “They all attended one of a small number of elite schools,” Jim says: “Harvard, Yale, Georgetown, Oxford, Brown, Stanford, Chicago or West Point.”

And many of them are “relatively close in age,” Jim points out — such as the picks for chief of staff, secretary of state, director of national intelligence and budget director.

“This is a tightknit group, mostly in their mid-50s, who went to the same schools, previously worked in the Obama administration and know each other well.”

Result: “There will be no room for Bernie Sanders and the ‘Bernie Bros’ or the radical Squad of Alexandria Ocasio-Cortez, Ilhan Omar, Ayanna Pressley and Rashida Tlaib,” Jim says.

“The Squad and the Bernie Bros will make a lot of noise and attract a lot of media attention. That’s fine with the New Oligarchs. The progressive sideshow will distract attention from the elite agenda.”

“The New Oligarchs prefer a bland, no-drama exterior,” Jim says. “As long as their agenda is being pursued, the fewer headlines the better.

“This requires the opposite of the bombastic Trump, who got headlines every day and sucked the oxygen out of every debate. The New Oligarchs prefer highly credentialed nobodies who are competent and low-profile. Administrative power will be given to what the elites call ‘a steady pair of hands.’”

So what does that mean for market-moving policy changes?

Start with taxes: “Biden’s tax proposals call for raising the top individual tax rate from 37% to 39.6% and increasing the long-term capital gains tax rate from 20% to 39.6%” on incomes over $1 million.

“Other hidden tax increases will be implemented by eliminating or capping tax deductions. This has the effect of increasing the effective tax rate without actually changing the statutory tax rate. Taxpayers pay more not because rates are higher but because deductions are fewer.”

Even if the GOP retains control of the Senate — that hinges on the runoff election in Georgia tomorrow — Biden could peel off a few Republicans who “might vote in favor of tax increases in a spirit of budget discipline.”

“They are also likely to reintroduce subsidies for electric vehicles. These initiatives will have the effect of hurting high-paying energy-related jobs, increasing costs to consumers and increasing budget deficits.

“On the whole, this climate change agenda will hurt economic growth even in the absence of the more radical Green New Deal.”

And it’s not as if the economy is exactly in rip-roaring shape, right?

Jim says the U.S. economy probably began climbing out of recession in July… but the renewed late-year lockdowns will send it back into recession, well, right about now. Certainly before the first quarter is over.

From Jim’s vantage point, the “Great Disconnect” between the economy and the stock market will reconnect sooner or later — and drag the market down.

“Cash allocations should be increased to reduce overall portfolio volatility and to give investors flexibility and optionality once some of the political and economic uncertainty begins to clear,” Jim says. And of course, don’t forget his recommended 10% allocation — actually he says “at least 10%” — to gold, silver and mining shares.

And watch this space for a special offer on Jim’s book The New Great Depression, set for publication a week from tomorrow.

For no obvious reason, the gap between the stock market and the real economy is indeed narrowing on this first trading day of 2021.

Nope, no big economic numbers till tomorrow. And earnings season doesn’t start for another couple weeks. Just a hard sell-off from record highs at year-end 2020 (in the case of the Dow and the S&P).

Elsewhere, hot money is flooding into gold. The Midas metal ended 2020 a hair below $1,900. It started climbing last night as soon as trading resumed in Hong Kong, and this morning it’s at $1,940. That’s a level last seen more than six weeks ago. Silver has shot past $27. Chalk it up to dollar weakness; at 89.6, the dollar index sits at 2 and a half year lows.

Back to politics for a moment — and as blatant an example as any of how the financial elite is leveraging “wokeness” to evade scrutiny.

The rest of New Year’s Day, liberal Twitter dragged the reporters of the piece for… being misogynists.

For one thing, the article did not focus exclusively on Yellen, or on women. You need go down only to the fourth paragraph to learn about the many corporate clients Secretary of State-designate Antony Blinken advised at his consulting firm.

For another thing, Ms. Yellen will be regulating most of the firms from whom she collected speaking fees. Is that not a salient point?

As we observed last summer, corporate America has embraced all manner of wokesterism — i.e., JPMorgan Chase CEO Jamie Dimon “taking a knee” — because diversity initiatives serve as an ideal distraction from how the power elite really exercises power.

And so you have Ms. Ruhle imploring Politico to “do better.” From that, you’d have no idea her husband works for a U.S. arm of the Swiss banking giant UBS, right?

One item of unfinished business from last year — an especially grinch-y move by GoDaddy, the outfit that registers domain names for people who want to launch a website.

On Dec. 14, the company sent employees an email announcing a $650-per-employee holiday bonus… 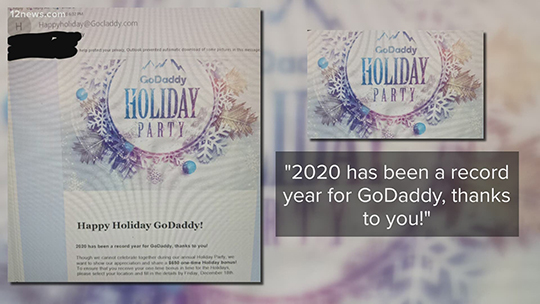 “The email was not true,” reports Phoenix’s NBC affiliate — which pursued the story because the company is headquartered in Scottsdale.

“The controversial email was sent out months after GoDaddy's CEO Aman Bhutani announced companywide layoffs that impacted employees across the country including in Arizona.

“Days after the email was sent out, the company hosted a town hall. Employees tell 12 News that many anonymously voiced their frustrations with the test, which they described as tone-deaf.”

OK, maybe an experiment like that is a little more excusable for a tech company where employees should know better. Maybe…

To the mailbag, and an interesting variant on the old, “I like The 5, but” trick.

“I'm no longer surprised by mass misinformation from the U.S. media, but I am surprised that you'd repeat what CNBC said about Coinbase ‘confidentially filing’ an IPO.

“The ‘P’ in IPO stands for ‘Public,’ and an S-1 becomes public information the moment it's filed with the SEC, though exceptions can be made to redact some proprietary information in exhibits attached to an S-1. I'm sure you could go to the SEC's EDGAR site and read the entire document at your leisure.

“Therefore, the most mysterious thing about Bitcoin remains the name of its inventor. Until that is known, Bitcoin is still an ‘investment’ that NO ONE can fully understand.”

The 5: There’s a curious provision tucked into the JOBS Act of 2012 — the law that failed in its promise to make pre-public companies more accessible to everyday investors.

Companies classified as “emerging growth companies” can indeed file their S-1 on a confidential basis. The contents don’t become public until 15 days before the roadshow in which companies planning to go public try to woo potential investors. And Coinbase hasn’t scheduled theirs yet.

Good catch, though. The “confidential” part flew right past us. And it was used by several other mainstream financial outlets as well, with no explanation. So thanks for keeping us on our toes…

P.S. Maybe you saw the headline: A judge in London has nixed WikiLeaks founder Julian Assange’s extradition to the United States on the grounds that the U.S. prison system is inhumane.

We made our comprehensive case in defense of Assange more than two years ago, when word of a sealed indictment first emerged.

It is still relevant because the story is not over and the First Amendment remains at grave risk. The U.S. Justice Department is appealing the ruling; on Wednesday the judge will decide whether Assange can be freed on bail in the meantime.

Donald Trump could still leave a lasting legacy — and infuriate the deep-state types who did so much to undermine him — by pardoning Assange. And Chelsea Manning. And Edward Snowden. It’d be one helluva parting shot.