The Purge Is Coming

Good news: The wokesters aren’t coming for your wealth. Assuming you have any, of course.

We return today to the phenomenon of the woke left, which has burst onto the scene during this month of June.

Like last time, we’re still fumbling in the dark. But perhaps this time we’ve managed to grab hold of a flashlight — albeit with dying batteries.

We begin on a Friday night earlier this month, when JPMorgan Chase CEO Jamie Dimon damn near broke the internet with this… 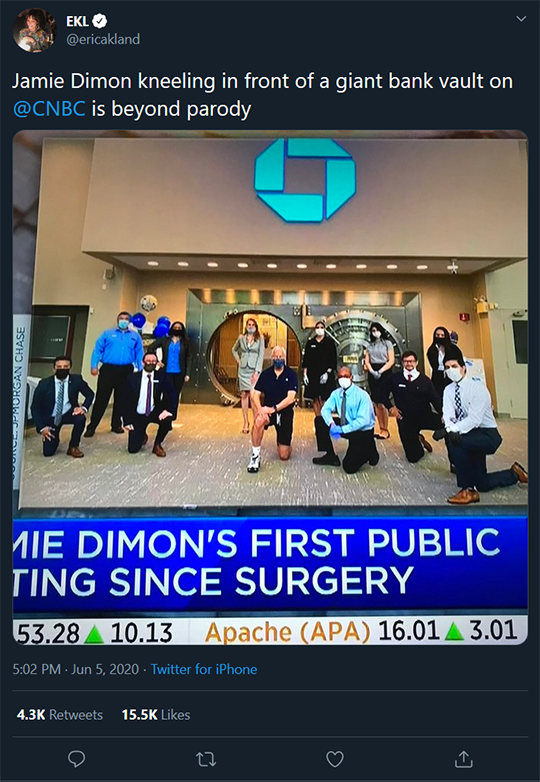 Perhaps you’ve noticed JPM is hardly alone among corporate America in this way. And you would be right.

“You basically have a moment where every corporation worth its salt is saying something about structural racism and anti-blackness, and that stuff is even outdistancing what candidates in the Democratic Party were actually saying,” observes Kimberlé Crenshaw. Crenshaw teaches law at both UCLA and Columbia. She’s one of the woke left’s leading lights in academia.

Here’s what you don’t hear much about from the woke left — socialism and the redistribution of wealth.

Gone are the days of late last year when Elizabeth Warren was calling out billionaires by name and Bernie Sanders was railing against “oligocky.”

“Rather than Medicare for All and taxing plutocrats, the rallying cry is racial justice and defunding the police,” writes Ross Douthat — one of the very few New York Times columnists we can stand.

“Instead of finding its nemeses in corporate suites, the intersectional revolution finds them on antique pedestals and atop the cultural establishment.”

While Sanders in particular scared the bejeezus out of the Democrats’ donor class and corporate C-suites, they’re positively embracing wokeness — “precisely because it isn’t as threatening to power,” Douthat submits.

It’s a relatively easy lift for corporate America to absorb the values of the social justice warriors and put the human resources department in charge of enforcement. “The idea that you need to retrain your employees so that they can work together without microaggressing isn’t Marxism, cultural or otherwise,” says Douthat; “it’s just a novel form of Fordism, with white-fragility gurus in place of efficiency experts.”

For their part, “the revolutionaries need scapegoats, examples, wrongthinkers to cast out pour encourager les autres, superannuated figures to retire with prejudice. But they aren’t out to dissolve Harvard or break up Google or close The New York Times; they’re out to rule these institutions, with more enlightenment than the old guard but the same fundamental powers.”

As we noted last time out, the woke left’s purge of the Times’ editorial page is already complete — the editor sent packing after publishing an Op-Ed that ran afoul of woke sensibilities.

First they came for the newsrooms. Now “cancel culture” is coming for the rest of the American workplace — just as Douthat suggests.

“In 1793,” he writes, “the Committee of Public Safety took charge of the French Revolution on a promise to ‘make terror the order of the day.’ Evidence-free show trials and ideological purges followed, consistent with the radical leaders’ belief that public safety requires public terror.

“Needless to say, critics of today’s radicals do not live in terror of being sentenced to the guillotine. But losing employment and social standing is no small matter. Having a job is usually connected to having health care and economic security: the ability to afford food, housing and medicine.”

All of which is a roundabout way of saying that the existing power structure is not under threat and soaking the rich is not a high-agenda item for the social justice warriors.

If you’re already retired and comfortably well-off, as many of our most longtime readers are after a career of hard work, take a deep breath. Worry more about your kids and grandkids.

To the markets — where stocks are regaining their footing after yesterday’s big slip.

The “virus resurgence” news hasn’t gotten any better since yesterday. Among other developments, the Republican governor of Texas has put his state’s reopening on pause.

Gold is again treading water at $1,763. Crude took a tumble after the weekly inventory numbers yesterday, but today it’s recovering to $38.50.

Meanwhile, we have a raft of economic numbers — starting with this week’s little chart of horrors, which reveals a curve you don’t want flattening… 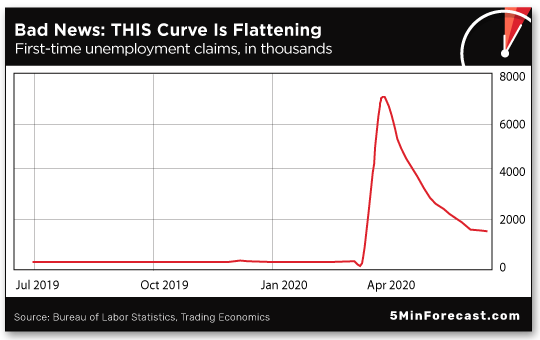 First-time unemployment claims rang in this week at 1.48 million — down imperceptibly from the previous week’s 1.54 million. “However much claims data are easing, losses in the labor market are ongoing and remain enormous,” says an Econoday summary.

Orders for durable goods — anything designed to last three years or longer — recovered by 15.8% during May. But that doesn’t begin to make up for the losses in March and April; year over year the number is down 13.6%.

However… that 13.6% plunge is skewed by hugely reduced demand for aircraft. Orders for “core capital goods” — a category that throws out aviation and defense — reveal a year-over-year drop of “only” 2.5%.

In the most anticlimactic number of the day, the Commerce Department delivered its third and final guess at first-quarter GDP — an annualized drop of 5%. The second-quarter numbers, due in late July, ought to be a doozy…

For the record: The International Monetary Fund projects the global economy will shrink 4.9% this year — just a slight revision from its previous forecast of a 3.0% drop.

Unprecedented, you wonder? Going back the last 40 years, yes… 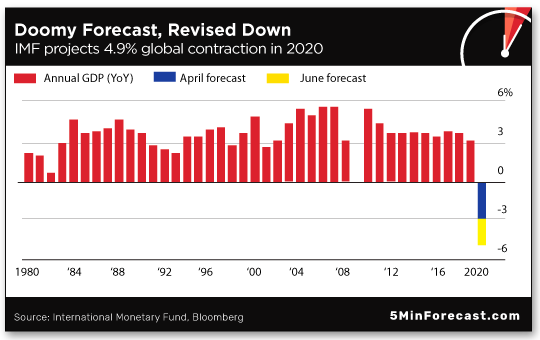 Among the globe’s major economies, India suffered the biggest downward revision and is forecast to shrink 4.5%. But that’s nothing compared with the expected drops in Latin America’s biggest economies — Brazil (9.1%) and Mexico (10.5%).

Then again, who knows? IMF chief economist Gita Gopinath confesses, “A high degree of uncertainty surrounds this forecast with both upside and downside risks.”

Upside, she says, would entail a vaccine. Not holding our breath…

The cannabis sector is taking a momentary tumble after one of the stranger stories of recent days.

From MarketWatch: “John Elias, a member of the Justice Department’s antitrust division, told the House Judiciary Committee in prepared testimony that the investigations were carried out even after staffers had determined that the cannabis business is highly fragmented with many market participants in the states that have legalized cannabis.”

In other words, antitrust wasn’t an issue. But Elias says cannabis mergers nonetheless took up 29% of the antitrust division’s time and attention last year.

To be sure, there’s a partisan agenda at work here. Democrats called Elias to testify as “part of the committee’s probe into whether the Justice Department under Barr has been improperly politicized,” says MarketWatch. But the story rings true.

For whatever it’s worth, the cannabis ETF THCX took a 4% spill yesterday and it’s down another 1.7% today. We’ll continue to monitor…

On the heels of one attempt in Congress to destroy online privacy — detailed here yesterday — there’s another, more direct attempt.

This one, introduced only this week, is called the Lawful Access to Encrypted Data Act. (What? “LAED” doesn’t spell anything cutesy. Lame.)

Essentially, it would do away with end-to-end encryption — “a tool for protecting data from hacking and outside access by making it very difficult, if not impossible, for anybody without permission to access the encrypted info,” writes Reason’s Scott Shackford.

“Even the company that created the communications device or app (like Apple or Facebook) cannot gain access to the data. That’s the point of this type of encryption.”

But no matter: The text of the legislation orders companies with a million or more subscribers “shall ensure that the provider has the ability to provide the information, facilities and technical assistance” to give the feds access on demand.

Facebook has already issued a response: “End-to-end encryption is a necessity in modern life — it protects billions of messages sent every day on many apps and services, especially in times like these when we can’t be together. Rolling back this vital protection will make us all less safe, not more.”

How did it happen? The Washington Post summarizes the GAO’s findings: “The problem relates partly to the fact that while the IRS has access to the Social Security Administration’s full set of death records, the Treasury Department and its Bureau of the Fiscal Service — which actually issue the payments — do not.”

So… kinda like how the FBI and the CIA didn’t talk to each other about the Sept. 11 hijackers until it was too late?

Then there’s the question of how the feds intend to claw back these payments: “Aside from announcing on its website on May 6 that stimulus payments made to dead or incarcerated individuals should be returned, the IRS does not have plans to take additional steps toward recouping the payments, GAO said.”

Oy… It’s as if the crisis-must-act-now atmosphere surrounding the corona-crud has transformed the entire federal government into the Pentagon — where trillions disappear down black holes, never to be seen again. Can’t wait to see how the Treasury Department fares in Uncle Sam’s annual audit…

On the topic of New York City’s fireworks crackdown, a reader writes…

“I think it was Mark Twain who said that enough fools blow themselves up on the Fourth of July that we ought to celebrate it at least twice a year.”

We don’t know whether Twain actually said that… but given many of the follies chronicled in today’s episode of The 5, how ’bout we organize a care package stuffed with fireworks that we could send to Washington, D.C.?

Or would our inquiry account for “hate speech” threatening the “safety” of government officials under SJW standards? Heh…

P.S. Have you heard about the “morning dip buy” trading strategy?

Check it out for yourself right here. The link will remain live through midnight tomorrow night.