In 2001, iconic investor Warren Buffett said his preferred market indicator “is probably the best single measure of where valuations stand at any given moment.”

And it’s in the danger zone… 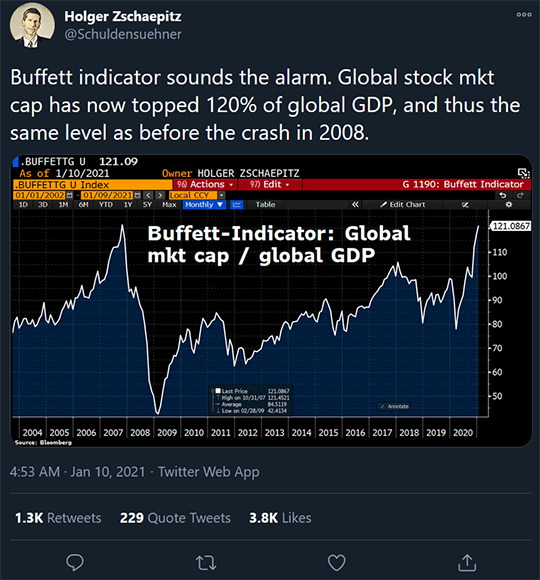 “The global version of the ‘Buffett indicator’ takes the combined market capitalizations of publicly traded stocks worldwide and divides it by global GDP,” Business Insider says. “A reading north of 100% suggests the global stock market is overvalued relative to the world economy.”

The market’s overvalued status is even more dire when the total market cap of the U.S. stock market and U.S. GDP are aggregated.

By that measure, the Buffett Indicator clocks in at 221% — “strongly overvalued” — a level not seen since the internet bubble of the early 21st century, according to current market valuation.

(Granted, the GDP has been artificially suppressed by the pandemic… but still.)

“By using its cash reserves to buy back some $1 trillion in securities, the Fed has created a market that’s awash with cash,” says an article at Forbes. Accordingly, Adam Crisafulli of Vital Knowledge Media notes “the pandemic was ‘perversely’ positive for large companies.”

In fact, he estimates “that the influx in fed and government spending helped boost valuation multiples in the S&P by a lofty 16% — more than the index’s 14% gain last year” (emphasis ours).

You do the math… Yikes.

So just how much is the Fed spending to buy back U.S. Treasuries, mortgage-backed securities and, most recently, corporate bonds? $120 billion per month since the Federal Reserve initiated its spendingpalooza in March.

“The U.S. federal government, meanwhile, has authorized some $3.5 trillion in spending to shore up the economic recovery as a result of the pandemic,” Forbes adds.

And Biden’s “American Rescue Plan” might tack on another $1.9 trillion in federal spending.

“If passed by the new Democratic-controlled Congress, the ‘American Rescue Plan’ includes $1 trillion in direct relief for households, $415 billion to tackle the virus and roughly $440 billion for small businesses,” CNBC says.

“We not only have an economic imperative to act now — I believe we have a moral obligation,” Biden pontificated five days ahead of his inauguration. 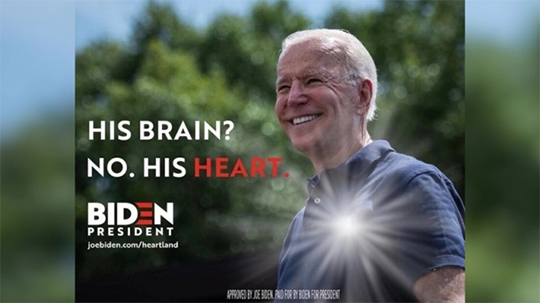 [This satirical meme — and slick ad lookalike — made a splash in April when “Bernie Bro” Brad Troemel confused Democrat and Republican campaign-critters. “It’s not every day you make some art that prompts a public response from both Joe Biden and Donald Trump,” Troemel said at the time.

Predictably, Twitter banned the piece of satire, saying it ran afoul of its Elections Integrity Policy. Mr. Troemel responded: “This image wouldn’t be shared if it wasn’t so believable.” Indeed.]

When all’s said and done, Forbes estimates the federal government will have doled out more than $10,000 in stimulus money per American. (Chump change compared with Fed spending: a dizzying $22,000 for each of 330 million Americans, according to figures from nonprofit Committee for a Responsible Federal Budget.)

“Be careful what you wish for,” Mr. Neuhauser warns. “You are seeing this massive… deficit spending due to a pandemic that has of course stopped the world.” he says.

“The market is trying to figure out which narrative that [it] should go with,” he continues. “For the past nine months, almost in a straight line, it’s been up in terms of equity markets.”

Mr. Neuhauser cautions: “We still don’t know… how fast and swiftly we come through [the pandemic]. We also don’t know what global growth will look like in the future years.”

“I think what ends up happening is… [we] will eventually start to see factors of inflation take hold,” he says. “Those are the things that ultimately pop the epic bubble.”

So if history rhymes, Neuhauser concludes: “Beware, the Roaring ’20s led to the 1929 stock market crash and the Great Depression.”

[Ed. note: Are we headed for a financial crash? Some among the ranks of the “smart money” set would say yes. Just consider the data…

The market sell-off in March of 2020 was the fastest crash in stock market history. The Federal Reserve has done everything in its power to prop up the markets. Bond buying… ETF buying… and creating/distributing over $3.7 trillion in a matter of months. (That’s more money than existed in all of 1996, by the way.)

The mother of all bubbles seems to be brewing just under the economy’s surface. And any further shock to the system might cause everything to come crashing down in the blink of an eye.

That’s why it’s urgent you prepare for a coming crash.

So from the man who made a killing in the crash last March… So much so that his track record averaged gains of 20% PER WEEK in 2020. (That includes winners AND losers.)

What’s his secret? Take this simple “market-resistant” step to score big gains in this market.

Meanwhile, commodities seem to be stuck in neutral. Oil is pat at $52.32 for a barrel of West Texas Intermediate while gold’s hanging out at $1,855.70 per ounce. And silver’s above $25 today.

Analyst Greg Guenthner says: “Everyone is talking about huge short squeezes in some super-speculative names.”

Ahem… We give you brick-and-mortar video game retailer GameStop (GME) that’s up a stupefying 800% in three months. This morning alone, shares popped 140% before coming down to Earth. And volumewise, “over 86 million shares have already changed hands, more than doubling its 30-day average trading volumes of 29.8 million shares,” CNBC reports.

Social media is stoking the rally: “GameStop has… been a hot topic in online chat rooms, Twitter and Reddit as some retail investors and day traders aim to push shares higher and squeeze out short sellers.

“One post on the popular ‘wallstreetbets’ Reddit Monday morning said, ‘IM NOT SELLING THIS UNTIL AT LEAST $1000+ GME.’ The post quickly drew more than 5,000 comments,” CNBC says.

Not to mention Citron Research — an outspoken GameStop short seller — cancelled a livestream Friday after its Twitter account was hacked by an “angry mob” because Citron predicts GME shares falling to $20.

“I can’t stress this enough,” Greg says, “we are in a crazy market environment right now. There’s tons of potential out there, but I expect reality checks soon. Stay on your toes.”

We received a barrage of emails responding to Dave’s question Friday: “Are you censoring yourself online?”

We share a sample of your responses at the bottom of today’s issue… and we’ll share more as the week progresses. But today, we include feedback outside the topic of self-censorship — in particular, Biden’s early days in office…

“The president killed the Keystone XL pipeline. The decision was more political than environmental.

“The cancellation will do little to improve the environment. But many say RIP. No one more so than that great American capitalist Warren Buffett.

“You see, Mr. Buffett is the owner of Burlington Northern Santa Fe Railway, and if you happen to find yourself stopped in a car at a railway crossing near the Alberta/Montana border, shut your engine off and take a snooze as a 200-tank car caravan pulled by massive BNSF locomotives snakes its way to Oklahoma carrying Canadian crude.

“The XL pipeline was to carry 850,000 barrels per day of crude. Mr. Buffett’s trains haul 500,000 barrels, and knowing how these things play out, BNSF will probably make up that difference shortly.

“It’s funny how having the ear of people in high places can work out for you in wonderful ways.”

The 5: Warren Buffett contributed a measly $250,000 to the Democratic Congressional Campaign Committee in 2019–2020. With that amount, he’s certainly not buying the attention of “people in high places.” Perhaps Buffett let his social capital do the talking…

As for the Keystone pipeline, in the last 24 hours, Montana’s Republican Gov. Gianforte appealed to President Biden to reverse course on last week’s executive order. Gianforte claims the pipeline’s environmental hazard is negligible.

(We’re no ecologists, but we’d think the pipeline might have less environmental impact than a 200-tanker train. Filled with crude oil. What could go wrong? Again, not ecologists.)

“According to the governor, the pipeline is already the most ‘economical and environmentally sensitive’ way to transfer crude oil to market, and blames the president’s decision on ‘partisan behavior,’” Fox Business reports.

“This is eco-terrorists weighing in with the president,” says Gov. Gianforte.

Cognitive dissonance abounds: Biden’s Keystone order hardly jibes with his flag-waving “Buy American” executive order today. With a stroke of his pen last week, Biden cancelled 1,000 pipeline jobs, according to the Austin American-Statesman, with an estimated 11,000 future jobs chopped too.

For more on Team Biden, a reader agrees with a “crypto conspiracy” featured Friday…

“I have no doubt that’s exactly what Janet Yellen is doing with crypto: Get the price to drop so she can get all her cronies a better deal.

“I have really had enough of this. Come on, ‘global reset.’”

The 5: *gulp* Yeah… that whole “reset” thing? In the words of The Princess Bride’s Inigo Montoya: “I do not think that word means what you think it means.”

“Thank you for bringing another great 5 minutes to my day.

“I was wondering if — given the continuing deterioration of our liberty and the rise of deplatforming people with unacceptable political beliefs — you worry that ISPs and email providers might eventually try to prevent you from putting out The 5 Min. Forecast?

“Thanks for always providing an interesting perspective!”

Yep, we’ve entertained that sequence of events. Our firm started in the newsletter biz mailing hard copies… so that might be a workaround? We’ll see…

Take care. We’ll be back tomorrow.

P.S. This critical crash-prep message is time-sensitive and controversial.

It contains a mysterious crash-preparation technique that you won’t find on Google, Bing YouTube or any other search engine or website.

Please do NOT forward or share this opportunity with anyone else.