Gee, it didn’t take much this morning to make everyone forget about GameStop and all that… 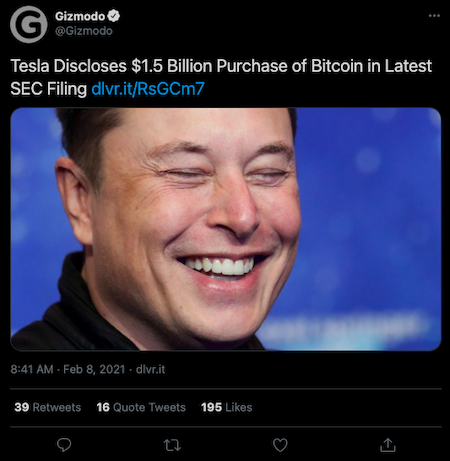 In a filing with the government, Tesla disclosed it’s bought $1.5 billion of Bitcoin to achieve “more flexibility to further diversify and maximize returns on our cash.” That’s a not-insubstantial chunk of TSLA’s $19 billion cash hoard.

In time, the company says it will start accepting Bitcoin payments from customers.

Hmmm… We took notice last week after CEO Elon Musk made some favorable Bitcoin comments. Talk is cheap, but the filing demonstrates his commitment isn’t just for show.

With that, Bitcoin has soared more than $5,000 higher to a record — past $44,000. And Tesla shares are up more than 2% as we write, within reach of record heights achieved last month.

Going back a year, the charts on Bitcoin and Tesla share similar trajectories… 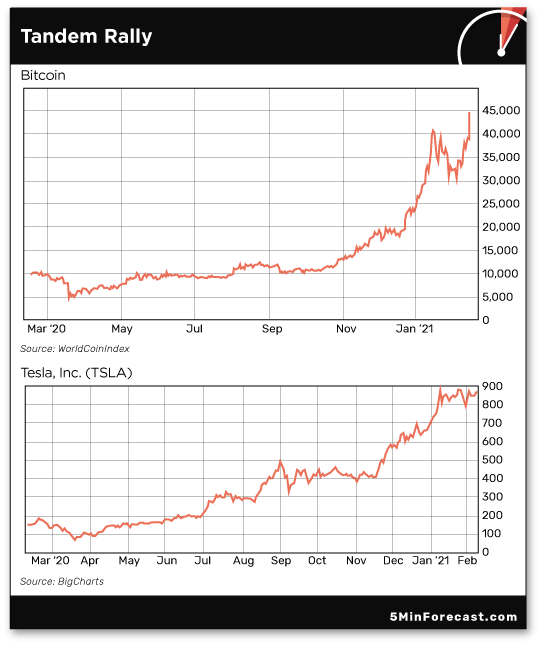 “We have very seldom seen levels of investor euphoria like this,” warns the legendary investor Jeremy Grantham.

He means individual investors, not institutions. He also means a host of asset classes — not just cryptocurrencies or highflying stocks like TSLA.

In fact, he said that back on Jan. 21 — days before the Reddit revolt with GameStop and other “meme” stocks burst into the headlines.

He told CNBC there’s “never been a great bull market that ended in this kind of bubble that did not decline by at least 50%.”

In an interview with Bloomberg the following day, he was asked, “Is now the time, as they say, to sell everything?”

His reply: “I suspect selling everything would work out just fine.”

Grantham brings no shortage of credibility to his bubble call. He bailed from Japanese stocks just as they were crashing in 1990. He anticipated the dot-com meltdown in 2000. He was among the lonesome voices — along with our own firm — who said the mid-2000s housing bubble would end in tears.

However, Grantham cautions that — as the saying goes — just because something is inevitable doesn’t make it imminent.

The $1.9 trillion “stimulus” bill making its way through Congress now? Much of that money could easily find its way into the market — propelling it still higher before that 50% or greater decline.

From the Bloomberg interview: “The sad truth of a lot of the ‘stimulus’ [last year] is that it didn’t increase capital spending, it didn’t increase much in the way of real production, but a lot of it eventually flowed into the market one way or the other, and I have no doubt that some of this new round of stimulus will too. If it’s as big as they talk about, this would be a very good making of a top for the market.”

So there’s trouble ahead, but there’s no telling when it will hit and there could be a lot more upside in the meantime. What to do?

Grantham likes emerging markets — and that’s easy for a retail investor to play with an ETF like EEM.

He also likes cash. That too is easy for a retail investor. But yikes — 1% on a 5-year CD (for instance) doesn’t build much of a nest egg in pre-retirement years, nor does it deliver much of an income stream post-retirement. Only the extremely wealthy can afford to hide out in cash.

Finally, Grantham likes venture capital — which is largely inaccessible to a retail investor.

That’s why we’re keen on a next-best-thing strategy if you’re looking to protect yourself from the next crash.

This strategy is battle-tested — not back-tested. Readers just like you used it to weather the corona-crash last February and March, when the S&P 500 sank 35% in record time. By year-end, this strategy delivered an average gain for 2020 of 20% per week. That includes the losing trades.

And no, you don’t have to do anything extreme or complicated to execute this strategy. Follow this link and learn how it works right here.

In the meantime, the major U.S. stock indexes are all in record territory — even the Dow.

Precious metals are staging a recovery — gold up more than 1% at $1,835 and silver up nearly 3% at $27.50. Looks as if any “weak hands” in silver have been shaken out after the Reddit ramp-up and subsequent sell-off last week.

Crude is up more than a buck to nearly $58 a barrel — a level last seen more than a year ago.

It’s not a stretch to wonder if some of today’s euphoria has to do with the details emerging from the $1.9 trillion relief bill.

We’re getting closer to “universal basic income” — at least for families with kids.

Per The Washington Post, Senate Democrats are proposing monthly payments of $300 for every child under age 6, and $250 a month for each child ages 6-17. The benefits would phase out for single parents with income over $75,000 a year and couples over $150,000.

The numbers are actually a bit less generous than a proposal from the other side of the aisle last week, by Sen. Mitt Romney (R-Utah).

Actually, Romney proposed those payments into perpetuity. The Democrats are looking to issue payments for 12 months in the current legislation… with an eye toward making them permanent later this year. 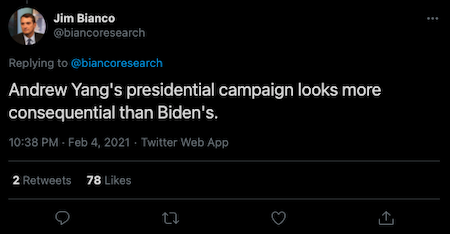 And yeah, it’s easy to imagine at least some of those “stimmy” payments will find their way into the stock market.

It’s not just crude that’s back to pre-pandemic levels; at $3.64 a pound this morning, copper is just off a multiyear high reached last month… 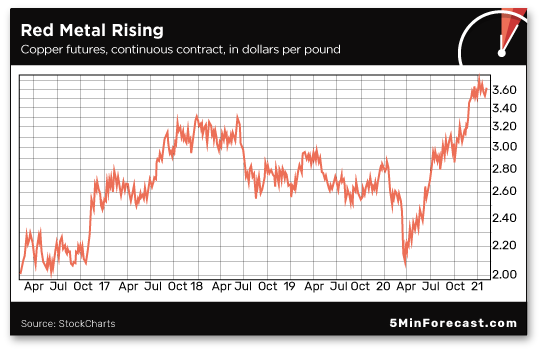 Chalk it up to a variety of factors — including, of all things, a spike in demand for freezers as the pandemic set in last year and people craved cold storage to stash more foodstuffs. China’s freezer production leaped 80% year over year, according to figures from Citi. And as it happens, copper is used for the tubing in many freezers.

But the big driver of copper demand going forward will be electric vehicles. According to figures from the commodities research firm Wood Mackenzie, a typical internal-combustion car requires nearly 49 pounds of copper to manufacture. An electric vehicle? More than 176 pounds.

“Because of its high conductivity, copper has also been called the ‘cornerstone of the electric vehicle revolution,’ which, as we know, is a huge trend that really began to pick up momentum in 2020,” says our income specialist Zach Scheidt.

The big name in copper is Freeport McMoRan (FCX). Alas, there’s no dividend… which is why Zach’s preferred copper play is a more diversified metals player sporting a near-5% yield — which he recommended a few weeks ago to paying subscribers of Lifetime Income Report.

London is seeing the same sort of pandemic exodus as many big American cities… but it seems many homes still have a steep asking price.

To wit, this 6-foot-wide abode in the Shepherd’s Bush section. 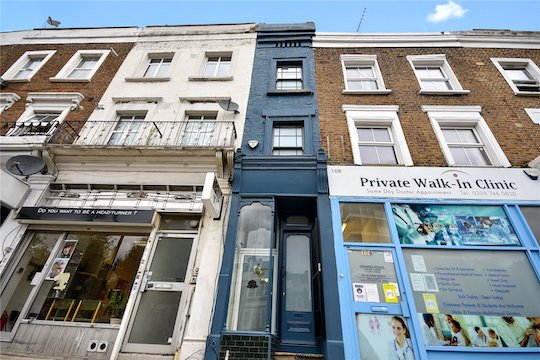 Per the description: “The unusual property, originally a Victorian hat shop with storage for merchandise and living quarters on its upper floors, was built sometime in the late 19th or early 20th century.”

The slender profile notwithstanding, there’s 1,000 square feet to work with. It’s just spread across five floors.

If it goes for that price, it will have doubled in value since it was sold in 2006.

Before the mailbag, a brief entry from the “This Will Make You Feel Old” department… 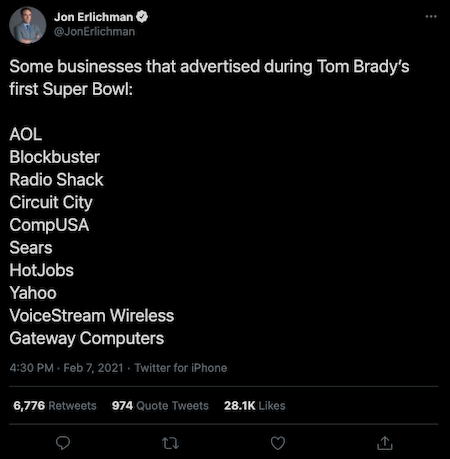 “Crafts are in a very deep hole even before taxes,” a reader writes — the first of several replies we got to whether or how the tax code punishes independent crafters, as the maker of Bernie Sanders’ famous mittens says.

“If you are, or live with, someone crafty, and then go look on Etsy, you realize things that take a week of work to make sell for $50! Who can live on $2,500 per year?

“Things can only sell for such prices because they’re sold near cost, as if the work were free, which it was, because it was done for fun, and the sellers think they’re making some money TOO! But that makes it completely impossible for anyone who does wish to make a living from it.”

“I don’t know how bad taxes are for crafters but spending hours to make something after paying several dollars for the raw materials is not a way to make money,” says another.

“I used to sew but the pattern, fabric, thread, etc., needed may cost $20–30 just to make an average garment. Something nicer would use more expensive fabric and cost more. Add to this eight–10 hours of work for $15 an hour and you can see why no one can make a living doing this. No one would pay three times as much for clothes that can be purchased easier.

“I can also knit but it takes weeks to complete something as big as a sweater. Adding taxes on top of the time and money for raw materials already needed makes it a big-time money loser. Crafters do this as a hobby for their own enjoyment.”

“I’m not a tax lawyer, but I know some folks who sell the products of their hobbies. They pay more taxes on the same amount of income than a sole proprietor.”

The reader adds a P.S. “Actually, under the current tax code one can no longer deduct hobby expenses under Schedule A, because the ‘miscellaneous expenses’ deduction has been removed. OTOH, a sole proprietor has to pay self-employment taxes (OASDI/Medicare).”

And a P.P.S. “The IRS gets to decide if you are a hobbyist or a sole proprietor.”

“Loved your response,” says a reader after we laid it all out there on Friday in response to a fellow reader’s complaint about an ad for one of our publications.

“While I usually enjoy your and Emily’s responses to the mailbag, I really enjoyed your response to the reader who complained.

“Please, please, always stay true to yourself and your ideas/opinions – and always continue to allow free speech and thought. It truly does make The 5 the best e-letter (and honestly the only one I consistently read all the way through) I receive.”

The 5: We also got a note of appreciation from the reader who originally wrote in and never expected a reply — so thanks to everyone for giving us the warm fuzzies. It reaffirms our belief that ours is the superior business model when it comes to conveying financial information.

Yes, there’s more where that came from. See here.