President Biden is standing by his man in California — Gov. Gavin Newsom — who’s the locus of a sixth recall-election effort in just two years as governor. 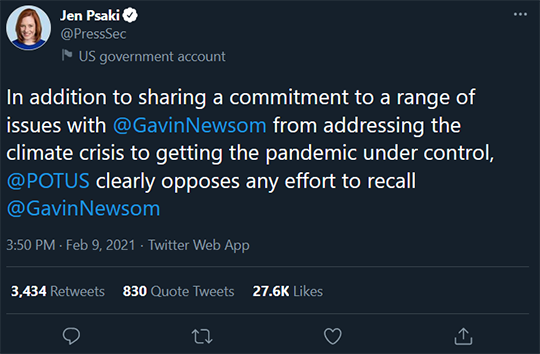 Regardless of Biden’s opposition, should the recall make California’s ballot — the petition requires 1.5 million signatures — the election would mark the fourth such gubernatorial episode in American history.

Will Gov. Newsom follow in the footsteps of Democrat Gray Davis, who was removed from office in 2003? After which, Republican “Governator” Schwarzenegger took up residence in Sacramento.

According to website FiveThirtyEight: “While a recall election looks likely, Newsom seems well positioned to survive it — for the moment, at least.” That’s assuming California’s survival is on equally firm footing… and that assumes a lot.

So we turn to our topic today: the “Californication” of the United States of America.

“Americans who may be curious about what life under Democratic Party control will bring don’t need a crystal ball,” says Mary L.G. Theroux, senior vice president of the Independent Institute.

“Having lived under one-party progressive rule for years, California can provide them a full picture — but they may not like what they see.”

A resident of the Golden State herself, Ms. Theroux says few states rival California when it comes to the deep divide between the haves and the have-nots. And in the most basic terms, if a single issue accounts for that divide, it’s the prohibitive cost of housing.

The Economist notes California’s problem is not “the stagnation of low incomes per se. It is stagnation relative to costs — in particular, the cost of housing.” The cost of which started to pull ahead of most other states in the 1970s, only to reach a level 80% higher than the average cost of housing in the U.S. by 1980. 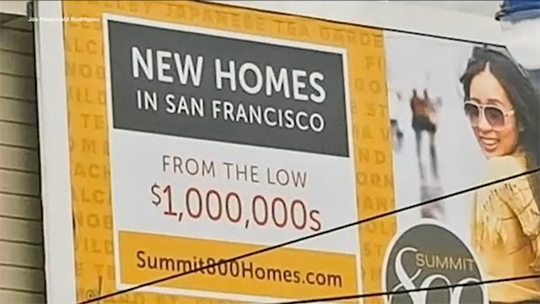 Courtesy: ABC 7 News/Twitter
Such a deal!

The California Legislative Analyst’s Office “blames public policies that suppressed construction when the rest of the country underwent a housing boom,” Theroux says. “Today, it’s virtually impossible to build new construction in California, as, thanks to regulations like the California Environmental Quality Act (CEQA), literally anyone can challenge any development, anonymously, with no legitimate cause.”

Adding insult to injury for house-poor Californians, the California Energy Commission voted on a law mandating new residential construction be built with solar panels after Jan. 1, 2020 — a requirement that adds about $20,000 to the price tag of every new house, condo or apartment building.

“But it’s not just housing that feeds inequality,” says Theroux. “California boasts some of the highest and most regressive taxes in the country.

“We bear a top income tax of 12.3%,” she says, “but it’s the everyday taxes like high sales taxes that really hit lower earners.

“Plus, on top of the most expensive gasoline in the country, thanks to mandates on its composition that require specialized refineries, gas taxes… bring the cost of gasoline 50% above the national average — which disproportionately hurts poorer workers who live farther from their jobs.”

More retrograde measures? California cudgels residents with severe “vice taxes” on tobacco, alcohol, soft drinks and more. “The list goes on and on,” Theroux says, while shining a light on “high minimum wage laws [that] cut off entry-level opportunities, while licensing requirements and their costs block other paths to a better life.”

All told, ultra-expensive housing — plus some of the most exorbitant taxes in the country — equal “unlivable cities.”

Theroux says: “California’s cities… now teem with thousands of people living in their streets.” Including once chichi Orange County along with San Francisco, Oakland, LA., Sacramento, San Diego — you name it.

“Many drug-addicted and/or mentally ill, these individuals pose hazards to themselves and those around them,” she says.

And instead of providing meaningful services, California lawmakers spend “billions of taxpayer dollars… directed to stasis, including delivering drug paraphernalia and other support that keeps people on the street and away from real help.” 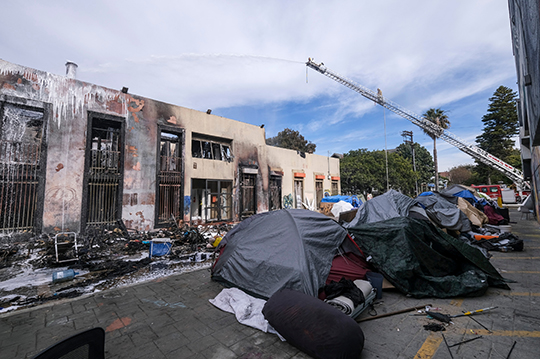 Fire at a homeless encampment in Venice Beach, January 2021…

This image plays out in city after California city, often creating a jarring cognitive dissonance; for example, pricey outdoor eateries… alongside homeless people sheltering in doorways not six feet away. Heartbreaking.

Indeed… And here’s the rub: As goes California, so goes the rest of the country?

“There is no place the incoming administration is leaning on more heavily for inspiration [than California] in setting a progressive policy agenda,” says an article at the Los Angeles Times.

“The revival in Washington of the California model of governance was cemented by Democrats’ recent recapture of the Senate majority, and comes after a Trump-era hiatus during which the state was road-testing ambitious new policies.”

Perhaps the key to the “California model” is none other than Vice President Kamala Harris. “She’ll be sharing ideas, innovations and breakthroughs from California that might help solve problems on the national level,” says former California Gov. Gray Davis (D).

(Yep, the self-same Gray Davis who was ousted from the governor’s mansion — posthaste — in 2003.)

The LA Times continues: “In Congress, of course, San Francisco Democrat Nancy Pelosi will be running point on the California agenda as House speaker.

“Not that Biden needs the nudge.” *goosebumps*

“[Biden’s] been pushing to nationalize some of the state’s pioneering efforts on climate action, workers’ rights, law enforcement and criminal justice, health care and economic empowerment since he was vice president in the Obama era.

“Even some ideas that haven’t worked out so well in California are on the national agenda now,” says the LA Times. “Biden is a fierce proponent of high-speed rail, as well as new protections for gig economy workers that California voters diluted in November.”

Rep. Jared Huffman (D-San Rafael) reasons: “[California] is an innovative and imaginative place that tends to set trends and blaze trails. It’s too big and too influential not to inform our country’s policy direction going forward.”

Wow. On the agenda, then? Expect budget-busting housing, burdensome taxes and Americans on the skids — if lawmakers don’t awaken from their California dreamin’.

To wit, we give the last word to an Angeleno lamenting the state of her city: “There is a lesson in this to all towns, large and small. Beware those who enter your gates. Especially the ones with bright ideas.”

It being Thursday, we begin with an important — albeit depressing — economic number, courtesy of the wonks at the Bureau of Labor Statistics. 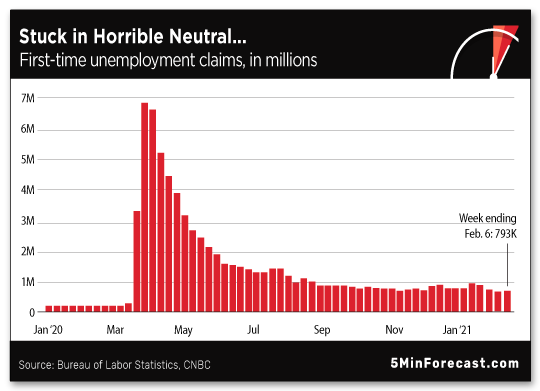 The total number for the week ending Feb. 6 exceeded the 760,000 economists anticipated, but it was nominally lower than last week’s revised total of 812,000.

As for how other mainstream outlets are spinning the number today, Bloomberg calls the number “a sign the labor market is only gradually improving as vaccines pick up and restrictions ease.”

While WSJ says: First-time unemployment claims fall “well below an early-January peak, a sign the labor market is mending from a steep slowdown.”

The Silver Institute notes: “In early February, a jump in retail investor appetite for silver, spurred on by social media platforms, pushed the price to an eight-year high…

“Going forward, the outlook for the silver price in 2021 remains exceptionally encouraging, with the annual average price projected to rise by 46% to a seven-year high of $30.00.

“Given silver’s smaller market and the increased price volatility this can generate, we expect silver to comfortably outperform gold this year.”

As for mining: “Most mines affected by COVID restrictions have restarted… Silver mine production output should recover and rise from the pandemic-affected 2020 level, achieving a double-digit gain this year to 866 million ounces, which would be the highest total since 2016.

“The outlook for silver demand is bright,” the Silver Institute concludes, with “expected gains in the critical segments of industrial demand, physical investment, jewelry and silverware fabrication.”

According to a Cambridge University study, Bitcoin “uses more electricity annually than the whole of Argentina,” BBC says. Which is a step up from the days when Bitcoin mining consumed enough electricity to power a small country…

“Cambridge researchers say [Bitcoin] consumes around 121.36 terawatt-hours (TWh) a year — and is unlikely to fall unless the value of the currency slumps.”

“The currency’s value hit a record $48,000 this week following Tesla’s announcement that it had bought about $1.5 billion bitcoin and planned to accept it as payment in future,” the article notes.

“The rising price offers even more incentive to Bitcoin miners to run more and more machines.”

We get the feeling Musk & co. are unconcerned…

BroBible says: “With so many people figuring out how to find work-life balance… Airstream is trying to find a niche need in the RV marketplace: a full mobile office with enough space and creature comforts to live in and work out of.” 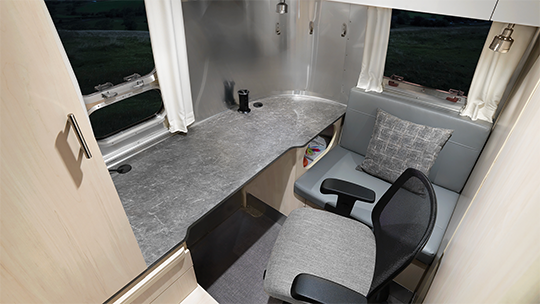 Short on elbow room, but maximizes the view…

According to Airstream’s website, the Flying Cloud 30FB Office features “a front queen bed, convertible dinette, plenty of storage and a corner office.” Also included in the 30-foot aluminum tube? “A bedroom, a bathroom with shower, three closets and a roomy kitchenette,” says BroBible.

But getting some relief from cabin fever’s gonna cost you — the Airstream office-on-wheels starts at $107,500. And full disclosure: You might just exchange one strain of cabin fever for another…

“Despite the many romanticized portrayals of van life on YouTube and Instagram, many come to discover that it’s not exactly easy to live in… for months at a time.”

We can already feel the aluminum walls closing in on us…