They are, without a doubt, the dumbest stock trades ever. And it turns out they’re the subject of scholarly research.

“How Much Do Investors Trade Because of Name/Ticker Confusion?” is the title of a 2019 paper by researchers at Rutgers.

Here in The 5, we first noticed the phenomenon in 2013. On Oct. 3, Twitter announced plans to go public effective Nov. 15 under the ticker TWTR.

But between impatience and a lack of reading comprehension, some people immediately bid up a bankrupt electronics retailer called Tweeter, trading under the ticker TWTRQ. (The “Q” is what indicates the company is bankrupt.) Shares leaped as much as 1,800%.

The Rutgers study is getting fresh attention after some weirdness amid the frenzied market action of early 2021.

Last month, Elon Musk was talking up the Signal messaging app — which is owned by a company that’s not yet public. Still, shares of a company called Signal Advance leaped 1,500%.

Also, some of the Reddit rebels who wanted to buy GameStop (GME) ended up buying a mining stock trading under the same ticker on the Australian Stock Exchange.

Turns out this sort of thing is way more common than you’d think… and even the pros get caught up in it.

So concludes the Rutgers team, who studied two decades of U.S. stock trades from 1993-2013. They reckon about 55% of publicly traded companies are susceptible to confusion.

“We document that both retail and institutional types of investors are equally prone to trades by mistake. You will be surprised how often sophisticated and seasoned investors make the same mistake,” scholar Vadim Balashov tells the BBC.

Says colleague Andrei Nikiforov, “Algorithmic and machine trading should minimize such mistakes. Yet we see that even machines make mistakes when identifying companies by name or ticker.”

Garbage in, garbage out — right?

Anyway, caveat emptor. Exercise your due diligence and all that before hitting the “buy” button.

Thus endeth our public service announcement for the day.

Speaking of the frenzied market action of early 2021, how ’bout them pot stocks?

“Cannabis names have blasted higher all week,” notes our chart hound Greg Guenthner – ”and the theme continues to pick up interest among the WallStreetBets gamblers. So far, their desire to squeeze these names is working beautifully.” 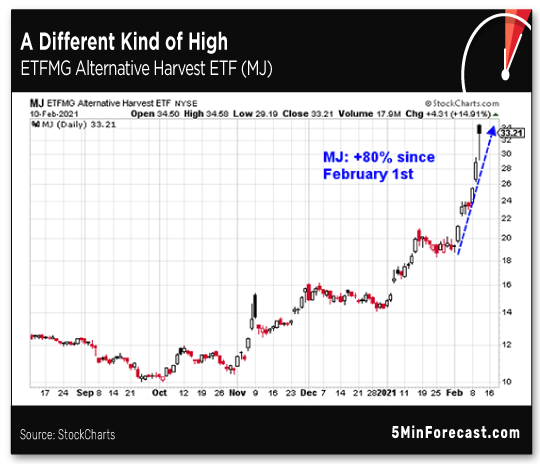 It doesn’t hurt that one of the big names in the sector — Canopy Growth (CGC) said while reporting its quarterly numbers that it’s pursuing a growth strategy on the assumption the federal cannabis ban will be lifted.

“Much like GameStop, we’re dealing with a parabolic move in pot stocks right now,” says Greg. “You have to shorten your timeframe with these YOLO stocks. Take profits early and often if you have the guts to play them – and don’t get left holding the bag!”

Word. The ETF depicted in that chart? Already down 25% yesterday and today. Life comes at you fast.

And then there’s Bitcoin — back to Wednesday’s record heights over $47,000, with a backdrop of still more mainstream adoption.

BNY Mellon — the nation’s oldest bank and the 10th-largest ranked by total assets — plans to “hold, transfer and issue Bitcoin and other cryptocurrencies on behalf of its asset-management clients,” reports The Wall Street Journal.

Elsewhere, Miami Mayor Francis Suarez has proposed giving city workers the option of being paid in Bitcoin… and giving citizens the option to pay taxes and fees in Bitcoin. “I think we’re on the cusp of seeing a major titanic shift on this,” he says. The city’s governing commission voted 4-1 to look into the logistics of such a move.

“When I started writing about cryptocurrencies regularly in 2017, the number of ‘nontechie’ people that I knew that were invested or interested was effectively zero,” James recalls. “I also took a while to warm up to it.

“Now it seems like cryptocurrency is featured in The Wall Street Journal or CNBC just about every day. Despite the new level of awareness, though, there’s still a tremendous amount of skepticism.

“This skepticism means there’s still opportunity. Once everyone wants to buy it, it will be too late. But don’t take my word for it. Do your homework, start with $10 and decide for yourself.”

As the week comes to a close, the S&P 500 and the Nasdaq are inching still higher into record territory.

Now for an insane and criminally underreported story in the annals of economic warfare.

For years, we’ve been following the fortunes of the Nord Stream 2 pipeline — a project that aims to bring natural gas from Russia under the Baltic Sea to Germany.

Three consecutive U.S. presidents — Obama, Trump and Biden — have tried to stop the project on the grounds that Europe would become “too dependent” on Russian energy.

Washington has piled on layer after layer of economic sanctions in hopes of killing it off. A round of sanctions that took effect in December 2019 has effectively stalled the project — with only 100 miles of the 760-mile pipeline yet to be laid.

This week the saga is becoming a scandal in Germany.

Scholz promised Mnuchin that if Washington dropped Nord Stream 2 sanctions, Berlin would invest $1.2 billion on infrastructure at German ports to ship in liquefied natural gas from the United States.

German environmentalists are outraged: “It is completely unacceptable that Olaf Scholz is trying to use taxpayers’ money to gold-plate U.S. fracked gas in Germany while at the same time wanting to buy Nord Stream 2 out of U.S. sanctions,” says Green Party lawmaker Sven-Christian Kindler.

The German government’s reaction has been typical of politicos everywhere — neither confirming nor denying the email’s existence, instead accusing the leakers of pursuing a “sanctimonious spectacle.”

An additional wrinkle: Herr Scholz happens to be a contender to succeed Chancellor Angela Merkel in elections next September.

Meanwhile, the story is getting no play at all here in the United States. Neither corporate nor alternative media care as long as there’s no obvious pro- or anti-Trump angle.

And so it’s left to us to put the matter on the record — and to ask why Europeans aren’t capable of deciding for themselves whether Nord Stream 2 makes them “too dependent” on Russian energy.

For the record: The pandemic drove up the median price of a single-family home by 14.9% during 2020.

That’s according to the National Association of Realtors. The biggest increase in the country was 39.5% in already-costly Fairfield County, Connecticut — where many Wall Streeters already had first or second homes.

The national median home price is now $315,000, thanks to work-from-home moves and ultralow interest rates.

To the mailbag: “Your description of California cities reminded me of a visit to Mumbai a few years ago — thousands of people living in makeshift shelters next to mansions with very high walls and barred gates.”

The 5: To some extent it’s not just California: Many big American cities have become inaccessible to the middle class. Only the wealthiest and poorest remain.

New York under Michael Bloomberg was a microcosm — as the urban studies scholar Joel Kotkin wrote for The Daily Beast in early 2020. This is a lengthy excerpt considering we have only 5 Mins. on any given day, but it’s really good…

As mayor of New York, Bloomberg’s approach — in addition to building on Rudy Giuliani’s law-and-order regime — was to shape the city as “a luxury product” shaped by the interests and investments of his fellow billionaires. Under his watch, the city moved to the tune of oligarchy, constructing ever more expensive apartment structures, often encouraged by heavily discounted property taxes and with lots of breaks for lavish new corporate offices.

In contrast, the city’s middle-class neighborhoods shrank, most precipitously in Manhattan, while those of the rich and poor grew. The city’s inequality burgeoned, ranking among the most pronounced in the country now. The very feel of the city changed as long-standing neighborhood retail fell from soaring rents, with once-cherished outlets either replaced by chains, “pop-ups” or simply abandoned, a form of “high rent blight.” Gone increasingly are both the historic neighborhoods and blue-collar commerce areas — the food, fish, flower and other markets — that had been part of the city’s economic culture for centuries.

In the process, he steadily weakened the city’s once diverse, if chaotic character into plutocratic-driven monoculture.

And so it goes in many other of our great cities, like Chicago under the younger Richard Daley and Rahm Emanuel. My wife and I were lucky enough to escape in 2007 — just before property taxes on our condo were set to double.

The drip-drip exodus of the middle class from cities became a flood last year with the pandemic — and more’s the pity.

“Cities are the greatest wealth-generating phenomena in the history of civilization,” remarks our Jim Rickards. “The word ‘city’ is cognate with the Latin word civis, which is the root of civilization.

“Cities are concentrations of talent, creativity, finance, research and capital, which are used to generate even more wealth. When you destroy cities, you destroy wealth creation and ultimately destroy the economy.”

Sorry to end the week on a downer. But successful investing depends on seeing the world as it is, not as you wish it to be…

P.S. We’re back tomorrow with our Saturday wrap-up, 5 Things You Need to Know. U.S. markets are closed Monday for Presidents Day, and we’ll take a break too. The weekday edition of The 5 returns on Tuesday.