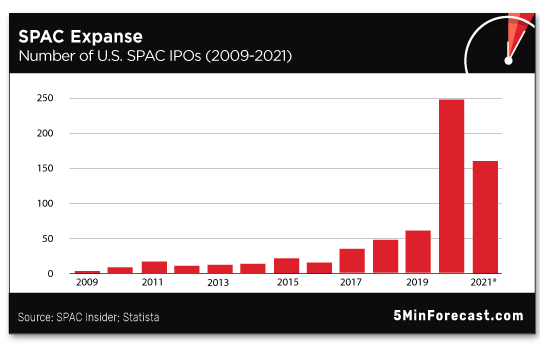 … and raised more than $50 billion. All of which is especially impressive considering the record-breaking $83.4 billion that coursed into SPACs for all of 2020.

Called everything from zombie funds to blank-check companies, SPACs have been around for decades, but grew in popularity — exponentially so — last year.

Recall a SPAC, short for special purpose acquisition company, has “no hard assets or sales… but lots of cash to acquire another company or companies to be named later,” NBC reports. (Or looked at another way, a SPAC is “an IPO-for-IPOs,” says journalist Matt Taibbi.)

According to multinational accounting firm Deloitte: “After a SPAC IPO, the SPAC’s management looks to complete an acquisition of a target (the ‘transaction’) within the period specified in its governing documents (e.g., 24 months).”

So at the beginning of a SPAC’s life cycle, its “special purpose” is allowed to be comically vague…

ENPC’s acquisition target? According to its 152-page SEC filing in August 2020, it’s anyone’s guess… but a fine example of word salad nonetheless. 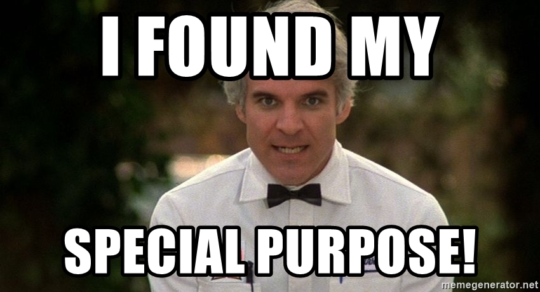 “Inspired vagueness,” Taibbi calls it. Notwithstanding, investors still have an appetite for SPACs…

“This trend isn’t going anywhere,” says our tech maven Ray Blanco. “So how can you invest in SPACs for profit?

“There are really two major things that you should look for when you’re evaluating a SPAC: Who’s the SPAC manager, and what’s the company?”

(Ahem… notice celebrity endorsements are not on the list of factors when evaluating a worthwhile SPAC — not to say SPACs haven’t been fronted by the likes of A-Rod, Shaq and pop singer Ciara, ginning up hundreds of millions in investor dollars.)

“First up, the SPAC managers themselves,” says Ray. “Look at what they’ve done in the past.

“Remember, the SPAC won’t have a history, but those who run it should have some… proven record. Do they have a good track record,” he adds, “or does everything they touch turn out to be a flop?

“Next, if the SPAC has targeted a company to merge with, you want to look at that company.

“And base your decision on how you would invest in any stock out there,” Ray says. “If you’re more aggressive, look for hot tech startups that have new, innovative ideas. If you want to play it safer, there are always solid, well-vetted private companies that can use SPACs to get onto the market.

“Once you’ve found a SPAC,” says Ray, “it’s as easy as investing in a stock. As with any investment,” he concludes, “plan your entry and exit and never invest more than you can afford to lose.”

Ray Blanco agrees: Most are in the dark when it comes to a crucial part of the Tesla-EV story. He’s convinced a tiny $2 battery company, founded by a former senior Tesla battery engineer, holds the key to Tesla’s ongoing dominance… A technology that’s already protected by patent application No. 3069168.

And if Elon Musk announces a partnership with this tiny company? Outsized gains are all but certain. Which is why Ray went live breaking down the situation he sees unfolding… Link to the details of this fast-moving situation.]

“Plenty on Wall Street expected bets on a post-pandemic world to change markets in 2021,” Bloomberg says. “But few could have predicted the ferocity of this reopening trade sweeping across assets.

“From stocks to bonds and commodities, traders are moving in sync on the belief that the most ambitious vaccination campaign in history is about to supercharge economic growth and unleash price pressures that have long been dormant.

“But it is the ever-deepening sell-off in global bonds that is mesmerizing Wall Street and beyond,” Bloomberg says, “with potentially dangerous consequences for risk assets.

“Bonds are renowned for being some of the safest assets that money can buy, but they have one key weakness: inflation.”

Which provides some context for the market today…

“The move higher in rates is unnerving investors fearing inflation could be driving it instead of just the economy recovering.” Ya think?

Scoping out commodities, the price of crude’s stuck at $63.17 for a barrel of West Texas Intermediate. Precious metals? Gold’s dropped 1.3% to $1,775 per ounce; silver’s also in the red, but still above $27. Palladium, in fact, is the only metal in the green at the time of writing.

For the latest durable-goods report from the Commerce Department: The headline number shows a 3.4% jump in January, way more than the 1% economists predicted.

As a reminder, “durable goods” are anything designed to last at least three years — washing machines, drill presses, jet engines.

If you strip out military goods and aircraft of any sort — where sales swing wildly month to month — you have a category called “core capital goods.” And that increased just 0.5% for January.

The long-term trend? “The manufacturing sector remains below pre-pandemic levels of production,” says The Wall Street Journal, “with 575,000 fewer workers now than a year ago.”

Turning to our Thursday distraction, first-time unemployment claims totaled 730,000 for the week ending Feb. 20 — well below the estimated of 845,000… 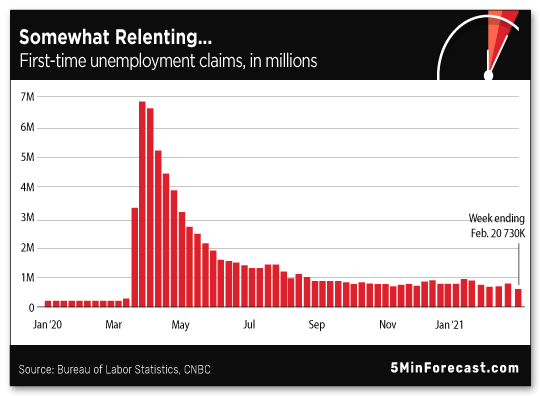 “Despite the decline to the lowest since Nov. 28, it was still well above anything the U.S. labor market had seen prior to the COVID-19 pandemic,” CNBC reminds.

And still above the worst of the Great Recession era…

“The U.S. is the second-largest producer of carbon emissions in the world, behind China,” says former investment banker Nomi Prins. “Yet China is adapting rapidly.

“It has more than doubled its construction of new wind and solar power plants in 2020 versus 2019, reflecting its pledge to cut fossil fuel dependence and reduce carbon emissions. 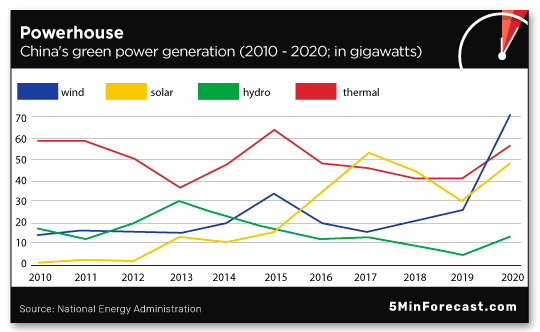 “China is outpacing the U.S. on infrastructure and public transportation — and green technology in both areas,” Nomi says. In order to compete, “President Biden has pledged $2 trillion to help the U.S. meet sustainable targets and improve infrastructure to be more environmentally sound.

“Even as the COVID-19 relief package snakes through Congress, President Biden is lining up step two of his economic stimulus,” says Nomi. “His proposed… infrastructure plan would seek to grow the economy, create jobs and reduce the transportation sector’s greenhouse gas emissions.

“It remains to be seen how much the package will be once it goes through the congressional process,” Nomi says, “but any funding on the public side will spur and augment financing on the private side.”

More on that tomorrow…

In a depressing sign of the times, COVID tests are just a vending machine away… 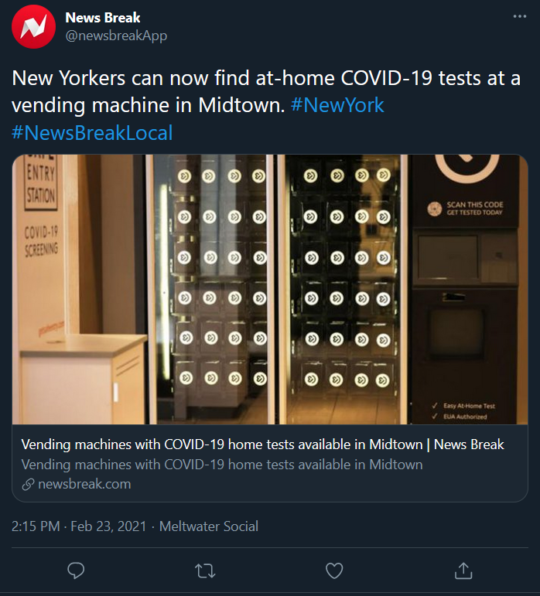 … if you happen to be passing through Manhattan’s Penn Station or Oakland International Airport.

But don’t expect to drop in some pocket change… and don’t expect instant results, either. A test from maker Wellness 4 Humanity will set you back $149. The vending machine takes debit or credit cards only — keep your filthy cash to yourself, please!

The benefit? No extra-long Q-tip up the nose, we guess. The PCR saliva test must be mailed to the company’s lab partner via FedEx; after which, results arrive within 48 hours.

No telling how accurate results are: The tests are not FDA-approved. They slide through under the “emergency use authorization” loophole.

And perhaps it’s just us, but the name “Wellness 4 Humanity” sounds like an overpriced granola bar. Speaking of, here’s to the day when vending machines are stocked with sugar, carbs and triglycerides… as nature intended.

“The 5 has talked a lot about nuclear power but only mentioned uranium and ended with a note from another reader about the high cost of nuclear waste.

“I’m curious why you are focused on antiquated technology like that?

“New designs for molten-salt reactors (which are meltdown-proof) use thorium — a mineral that the U.S. has in abundance — for fuel. Thorium does not produce so-called ‘high-level waste,’ which is actually unused plutonium in the spent fuel rods of current reactors.

“Thorium reactors have been designed to be modular too. So we could have a distributed energy grid that is far less prone to local problems becoming national ones.

Another reader riffs on the same theme: “Surely Ray knows the use of uranium in fission results in weapons-grade byproducts.

“Then there are costly, error-prone operations (Three Mile Island, Chernobyl, Fukushima and an *almost* Texageddon) plus the ongoing 1,000-plus-year waste-management problem.

“Why not use thorium for the nuclear fission process? What are Ray’s thoughts on thorium fission? My understanding is thorium provides solutions for some of the problems I listed above.”

The 5: We reached out to Ray and he was kind enough to weigh in: “I fully agree regarding thorium,” he says. “Thanks to Hyman Rickover, the father of the nuclear Navy.

“Even existing reactors could be back-fitted with thorium fuel rods with the right technology. Thorium rods might also incorporate and consume nuclear waste, turning it into a less caustic waste product in the process. And it doesn’t create much waste, despite what people worry about.”

Ray continues: “The fear of nuclear power… is completely irrational. Nuclear power plants haven’t killed a single American. Consider that harmful waste products from other energy sources are dispersed over a vast area, making them hard to deal with. The harmful waste products from nuclear, however, are all concentrated… The problem is greatly exaggerated; it can be managed.”

The 5: It bears repeating we value the freedom to feature the opinions — at times even conflicting opinions — of a diverse stable of editors. So while we’re not making any value judgments, it’s worthwhile looking at the energy sector from all angles. From there? Investable ideas.

Have a good one… We’ll be back tomorrow.

P.S. According to Ray’s research, if Tesla announces a partnership with this under-the-radar battery company, he believes it might deliver incredible gains to everyday investors… Potentially as high as 1,000% in the next three months!

That’s why Ray recorded a presentation packed with all the information you need to hop on this time-sensitive opportunity… but you’ll need to watch it before it’s taken down.