The article was the theme of a single-topic episode of The 5 in August 2020 after it was picked up by the New York Post… and read by about 30 million people. And none other than mega-rich comedian Jerry Seinfeld responded to Altucher’s assertions in an Op-Ed at The New York Times.

Here’s all you need to know about that: Seinfeld called James a putz and ranted, Howard Dean-style, about a resilient NYC. “We’re going to keep going with New York City if that’s all right with you,” said Seinfeld. “And it will sure as hell be back. Because of all the real, tough New Yorkers who, unlike you, loved it and understood it, stayed and rebuilt it.”

James responded via Twitter — and after calling Seinfeld a “good guy” — he noted Jerry “took the time from his compound in the Hamptons to write a piece about me without addressing any of the actual problems NYC faces.”

“I was in New York City throughout much of the pandemic,” says James, “and there were devastating economic consequences.”

But the everyday refrain James heard in defense of a NYC rebound: “Once there’s a vaccine, it’ll all go back to normal.” He contends: “It’s only going to get worse.” 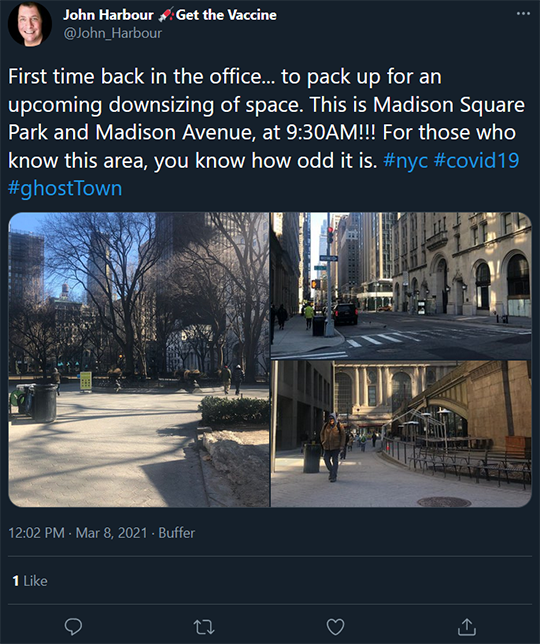 A man on the (deserted) street’s observation…

Take NYC’s budget deficit. Unlike the state, “New York City is required by law to balance its budget with the revenues it expects to raise – the city cannot borrow for operational expenses,” says an article at The Gotham Gazette.

The city’s “budget is heavily dependent on property tax revenue,” the article continues, “which is expected to fall by $2.5 billion in the next fiscal year, beginning July 1.” The reason?

“Plummeting values of office buildings and hotels, which have largely been empty since the pandemic hit.

“That projected drop has raised the specter of budget gaps of more than $4 billion over the next three fiscal years that could be hard to cover without significant cuts,” The Gotham Gazette concludes.

About those significant cuts? James expects NYC is “not going to be able to hire police officers, teachers, EMT workers.” Not to mention MTA workers, after the city’s bus and subway system has been hemorrhaging $200 million. Per week.

“So services in New York City are going to go to hell,” James tells our executive publisher and 5 founder Addison Wiggin in the latest installment of the Wiggin Sessions interview series.

Which factors into “the largest exodus ever out of NYC,” James says — alongside city bankruptcies that swelled 40% from March through September last year — meaning “hundreds of thousands of employees went jobless, homeless, left town,” he says.

“Who’s going to move in to replace all the people who are leaving if there are bankrupt businesses and worse services?” James asks. “And then there’ll be less money next year. It’s going to be a death spiral.”

No doubt about it: The pandemic changed everything…

Or Miami, where James and his family recently decamped — a decision he made late last year after receiving threats because of his controversial article. (No kidding.)

“What reason will people have to go back to NYC?” James continues. “People are saying: ‘Wait a second — I was paying over 16% in state and city taxes, and these other states and cities have little to no taxes.’

“And you can be just as productive, make the same salary, have a better quality of life with a cheaper cost of living.”

More choices? As we pivot topics, James — an early adopter of crypto — sheds light on what he believes is the new safe haven…

“The younger generation doesn’t believe in gold,” James says. “And of course, we were predicting this back in 2017,” he continues. “We were one of the first publishers to say so.

“I do think the flight to safety now is Bitcoin because, unlike gold, it actually has functionality,” says James. “You can spend Bitcoin, and then there’s all this interesting software functionality.

“At the end of the day, gold is just a rock; there’s nothing you can actually do with gold, except hold it.”

[Which as you know, reader, we’re not opposed to… Macro expert Jim Rickards, for instance, recommends 10% of your portfolio allotted to precious metals. That said, we’re happy to introduce readers to multiple — and sometimes even conflicting — perspectives from our stable of editors.]

“Look at Elon Musk with Tesla, Michael Saylor with MicroStrategy and some other companies — even Amazon — they’ve been putting their cash reserves into Bitcoin,” James says.

Not to mention CEO Cathie Wood of Ark Investment Management has gone on record with an astonishing Bitcoin $400,000 prediction — a prediction James agrees with. “Let’s say Bitcoin simply replaces gold as a flight of safety. If Bitcoin were to get to the market cap of gold, then I think we’re looking right now at about a $400,000 price.

“I always tell people, Bitcoin is not going to stay at this level,” James concludes. “We’re on our way to somewhere else, and $50,000 is just a stop along the way.”

[Ed. note: Are you concerned about the unpredictable market? And what it’s doing to your retirement? James Altucher exposes the biggest threat to your money right now… And a real plan to protect against it.

“The Nasdaq broke free from the bearish action that has dominated the tech sector for the better part of the past three weeks,” says analyst Greg Guenthner.

One caveat: “This is not a prediction, but I think this choppy action in the tech names might continue after this recent rout,” says Greg.

Then there’s this uncanny copper story: Geneva-based oil trading company Mercuria Energy Group was swindled in a deal for 10,000 tons of copper worth $36 million.

“Last year, Mercuria agreed to buy the copper blister, an impure form of the metal, for delivery to China,” BBC reports. “About 6,000 tonnes was loaded for shipment in more than 300 containers on eight vessels.

“But before its journey from a port near Istanbul, the copper was switched with paving stones, spray-painted to resemble the semirefined metal.

“Mercuria… is seeking redress in Turkish and U.K. courts against the copper supplier Bietsan Bakir.” And the company reports Turkish police have already nabbed a few suspects.

Heh… not quite as sexy as the gold-plated tungsten bars we were writing about a decade ago, but it’s certainly bizarre…

The big economic number of the day is the consumer price index — up 0.4% in February, as expected. The big driver being the price of gasoline, which accounted for more than half the monthly increase.

What’s this? CNBC is calling the inflation number “tame” even though the year-over-year increase just jumped from 1.4% to 1.7%… 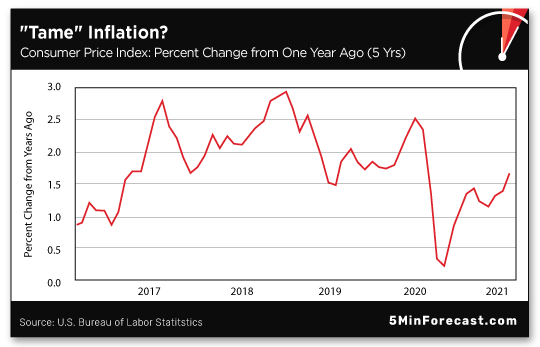 As always, we caution any resemblance to your own cost of living is purely coincidental.

Perhaps Shadow Government Statistics’ rate of 9.4% is more in line with your actual experience? Which also happens to be the highest rate since the pandemic hit…

Does cannabis offer an effective, long-lasting treatment for glaucoma?

“Since the 1970s, THC — marijuana’s main ingredient — has been known to decrease intraocular pressure (IOP), one of the symptoms common to this eye disease,” says pot stock authority Ray Blanco.

“But smoking cannabis is not an effective way to control the disease,” he says. How about THC eye drops? Ray counters: “THC is hydrophobic, meaning it isn’t water soluble. So in the eye, THC won’t dissolve and penetrate where it can do its work.”

As for non-THC glaucoma treatments on the market, they’re known to lose efficacy over time, and some of the glaucoma eye drops even irritate the eyes.

“But if left unchecked, high pressure inside the eye tends to damage the optic nerve, leading to progressive vision loss and eventual blindness,” Ray says.

“Currently, 78 million people suffer from glaucoma worldwide, and they represent a market worth $6.6 billion per year,” he continues. “Considering aging populations, that number is expected to increase to 100 million in 2040… an estimated market of $11 billion per year.

“Whoever makes an effective cannabinoid-based glaucoma medication could open a market worth hundreds of millions of dollars,” Ray concludes. He’s following one promising treatment — and the company behind it — in Breakthrough Technology Alert. Stay tuned…

A father-son duo successfully sued for documents that prove the FBI searched for gold in 2018.

Dennis and Kem Parada of Finders Keepers LLC appealed on the basis of the Right-to-Know Law, requesting records from the Department of Conservation and Natural Resources about an FBI dig in the Dent’s Run area of Pennsylvania — state-owned land, by the way.

According to The Associated Press: “On March 13, 2018, treasure hunters” — Finders Keepers — “led the FBI to Dent’s Run in Benezette Township, Elk County — about 135 miles northeast of Pittsburgh — where legend has it an 1863 shipment of Union gold was either lost or stolen on its way to the U.S. Mint in Philadelphia.”

The Paradas were instructed to remain in their car for much of the excavation after leading the feds to the site. When they were allowed to return, all they found was a gaping hole. For his part, Dennis Parada says: “I gotta find out what happened to all that gold.”

This email sums up the state of Pennsylvania’s position: “Can you please provide the basis upon which the Office of the United States Attorney asserts that the gold, if found, belongs to the federal government?” asked improbably named Audrey Miner, chief lawyer for the Pennsylvania Department of Conservation and Natural Resources.

With allegedly seven–nine tons of gold at stake, the AP says: “That much gold would be worth hundreds of millions of dollars today — and, assuming it was there, would almost certainly touch off a legal fight over how to divvy up the spoils.”

The feds’ position? Typical. We can neither confirm or deny… But a Pennsylvania judge might have tipped his hand after opposing the Paradas’ petition for the federal writ of entry and seizure warrant.

The name of the sealed federal case: “In the Matter of: Seizure of One or More Tons of United States Gold.”

P.S. While Wall Street laughs all the way to the bank, everyday investors are left exposed to the market’s wild swings.

Want an edge? Stay informed with this presentation… before it’s taken down at 9:30 a.m. tomorrow.