Here we go again, the mainstream wringing its hands about the b-word…

“It smells like a bubble,” Turner says. All the conditions are lining up — easy trading, easy credit, mass speculation.

But there’s one critical thing missing, he says — a catalyst to trigger a full-on mania.

Which means that even if we’re in a bubble, we’re not at the blow-off top.

That’s a lot more nuanced than the “classic bubble dynamics in so many different assets” we cited Dalio as saying last Saturday. It also rings true with us, as do Professor Turner’s remarks.

It comes back to the three phases of a bull market…

Last June, as locked-down folks with their first round of stimmy checks had time to spare and money to burn… we suggested it was a moment comparable to 1995, when a critical mass of people were getting their first online brokerage accounts. No more getting on the phone to place a trade.

But during that mania phase, there was an episode when mom and pop investors were likely scared into selling when they shouldn’t have.

It was the summer of 1998. A wave of Asian currency collapses that began the previous year climaxed in a default by the Russian government and the collapse of the hedge fund Long Term Capital Management. In just seven weeks, the Dow tumbled 18.2%. 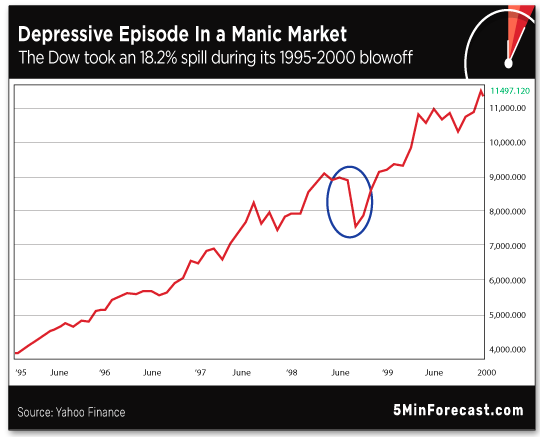 Now, if you were in the markets at that time, think back. And if you weren’t, just imagine. We have three questions for you.

First question: How likely is it you would have had the conviction to hold on tight — and resist the impulse to sell?

Be honest. No shame in your answer. As we said on Tuesday, giving in to that impulse is only human.

But the price of giving in is even steeper than you might think. Because here’s the second question: Look at the chart again. How long would you likely have waited for the market to go back up before you got back in? In other words, how much of the recovery would you have missed? Again, be honest. We’re talking about all-too-human reactions here.

Which brings us to the third question: What if you had devoted a tiny portion of your portfolio to a hedge that gave you peace of mind during that 1998 pullback — so you didn’t give in to the impulse to sell?

Now… bring your mind back to the present moment. Imagine a similar pullback happening tomorrow or next week or next month.

As we said two days ago, market history since World War II suggests a 10% pullback is in store sometime over the next year. And that’s just the average — It could be steeper.

It can happen anytime for any reason. For all we know, this coming Monday could be the next “Black Monday” — the stuff of future stock market legends.

Maybe an oil tanker gets blown up by a drone overseas. Maybe a new strain of the virus emerges in a country that’s been mostly spared up till now. Maybe someone we don’t know about yet suddenly owes billions from the recent collapse of the British lender Greensill Capital.

But if you could devote, say, 1% of your portfolio to a “disaster insurance” trade… you could breathe easy. You wouldn’t panic about the losses elsewhere in your portfolio. Depending on how events played out, this one trade could make you 40 times your money — and significantly pad your retirement account.

This “disaster insurance” policy was the subject of my exclusive briefing yesterday with our trading pro Alan Knuckman. The replay is available to watch right now at this link. But don’t waste any time; the sooner you act, the sooner you’ll have peace of mind before the next scary headline hits.

The big market story today is crude: All of yesterday’s big gains have vaporized. At last check a barrel of West Texas Intermediate is down $3.40 to $57.78, the lowest since early February.

The media’s narrative for the jump yesterday was that giant containership that ran aground and is blocking most of the Suez Canal. But it’s still stuck there today and all attempts to free it have failed. All we can do is throw up our hands and acknowledge again that crude futures are among the most manipulated of all prices in capital markets.

The big economic number of the day is a milestone by a couple of measures.

It was a year ago this week that the lockdowns sent first-time unemployment claims shooting higher — indeed, demolishing all previous records. This week as we return to the little chart of horrors, the number has sunk below 700,000. It’s the lowest reading of the pandemic era… 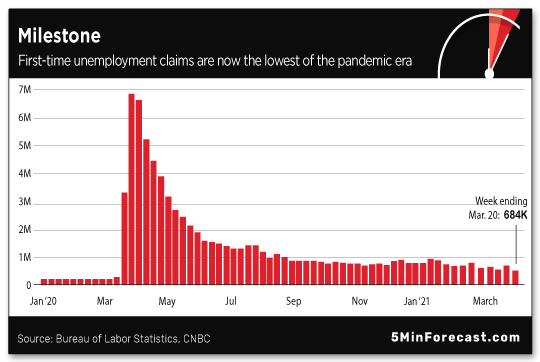 For the record: Facebook’s Mark Zuckerberg is being his most brazen yet in demanding Congress throttle his competition.

Not that he put it in such terms testifying this morning to a House committee. No, instead he’s getting specific about the changes he wants to see to Section 230 of the Communications Decency Act of 1996 — the law that shields online platforms from liability for content posted by users.

“Instead of being granted immunity,” he says, “platforms should be required to demonstrate that they have systems in place for identifying unlawful content and removing it.”

And so the internet creeps ever closer to what the power elite considers the “good old days” of media gatekeepers — when three network evening newscasts all took their cue from that morning’s New York Times.

Not coincidentally, Zuckerberg’s company has shot to the top of the list when it comes to money spent on lobbying Washington, D.C.

That’s according to figures out this week from the Public Citizen watchdog group. Facebook is No. 1, spending $19.7 million last year — with Amazon close behind.

In a distant third is old-media giant Comcast (parent of NBCUniversal), followed by (of course) four of the big five defense contractors… 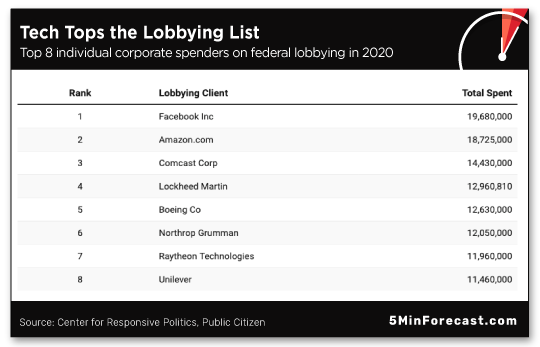 The staggering thing is that only three years earlier, Facebook and Amazon didn’t even make the top eight on this list. Not coincidentally, it was three years earlier that members of Congress started demanding Facebook step up to curb “hate speech” and “misinformation” after Donald Trump’s election.

The evolution of this list over the last decade is likewise fascinating. The top spender in 2010 was the giant California electric utility PG&E, followed by General Electric and FedEx. The only constant in the top eight? Two of those defense contractors.

In any event, the low levels of the numbers are remarkable when you think about it. The $13 million Lockheed Martin spent on lobbying last year? A single F-35 jet costs $110 million, according to the Project on Government Oversight… and it can’t hold its own in a dogfight, which is what fighter jets are supposed to do.

Really, in what other endeavor do you get that kind of return on investment?

Wait a minute, there was a black-market trade in Grape-Nuts a few weeks ago?

“The Grape-Nuts cereal shortage of 2021 is over,” USA Today informs us, as if everyone knew a shortage was underway in the first place. “After months of being out of stock, the cereal is shipping at full capacity to stores nationwide.”

In addition to semiconductors and all the other products caught up in supply-chain snags, it seems Grape-Nuts were in short supply — although the manufacturer, Post, is unwilling to say exactly what the problem was, lest it accidentally divulge the cereal’s sooper-seekrit formula.

In any event, it seems some people resorted to getting their Grape-Nuts fix by turning to third-party sellers on Amazon and eBay, where a box fetched as much as $110.

And so Post has an offer for anyone who paid more than $10 between Nov. 1 and March 15: They’re eligible “to submit a valid retailer or e-retailer receipt for a partial refund of up to $115 to help cover the difference between the amount paid and the suggested retail price of the Grape-Nuts Original cereal box purchased.”

Well, at least you don’t have to send in the actual boxtops if you already threw ’em away…

P.S. One more reminder: The replay of our exclusive Crash Protection Summit 2021 is available for viewing right here. But for reasons that will become obvious when you click, we’ll be pulling it offline at midnight Sunday night.