Past Its Expiration Date (Infrastructure)

Less than three weeks after signing the $1.9 trillion “American Rescue Plan,” Biden prepares to spend it up on infrastructure…

Today the president returns to Steel City — the scene of his first campaign stop after last year’s DNC — for a public unveiling of “Build Back Better,” or what’s believed to be a $2–4 trillion infrastructure package. 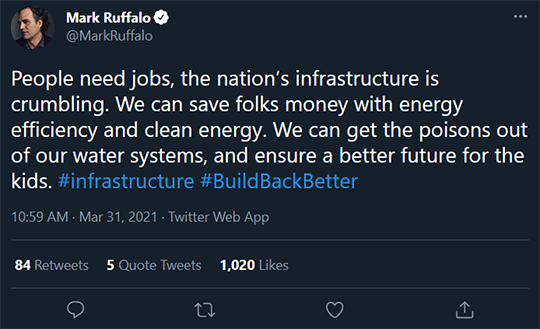 Let’s face it, the details of Biden’s plan might take the rest of 2021 to gel, but as far as we can surmise, some of Biden’s top concerns are traditional infrastructure and clean energy. Per the latter, former Obama adviser — and HRC devotee — John Podesta even dares: “I think they’re obsessed with 2035.”

Podesta refers to the CLEAN Future Act that House Democrats proposed in January, which would “require all retail electric providers to generate 100% of their power from zero-emissions resources by 2035,” according to website Utility Dive.

And aside from the CLEAN Act, there are several bills floating around Congress for Team Biden to glom onto…

Some of the bill’s notable line items include…

Warm up the money printer?

Vox says: “Then there’s the debate of how a massive infrastructure bill, coming on the heels of an already passed and signed $1.9 trillion COVID stimulus law, will be paid for.” You probably see where this is going…

In an ABC interview, Biden said “yes” to new taxes… with a caveat. “Anybody making more than $400,000 will see a small to a significant tax increase,” he said, while assuring the rest of us we won’t cough up “one single penny” more to the IRS. (We’ll see… )

Further details are still murky, but let’s assume Biden makes good on his campaign promises: “increasing the corporate tax rate from 21% to 28%,” Vox says, and “changing capital gains taxes… for people making more than $1 million, so that they would be taxed the same as income.

“[Biden] also ran on expanding the estate tax, rolling back deductions for pass-through entities such as S-corporations… and increasing the minimum tax rate on foreign income paid by big multinational corporations.”

“Oh, I may not get [Republican votes],” Biden said, “but I’ll get the Democratic votes for a tax increase.” And he’ll need every vote if he wants to fund “Build Back Better,” because “infrastructure isn’t as bipartisan as it seems,” Vox says.

“Infrastructure is sometimes talked about in Washington like it’s the most bipartisan issue in town.” But the belief that politicos of all stripes would collectively rally to improve American infrastructure might have died during Trump’s administration… 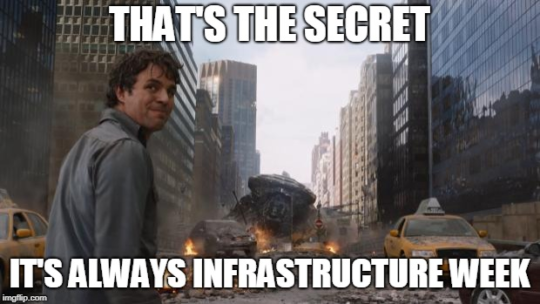 That said, updating America’s infrastructure is, in fact, critical…

“Since the mid-20th century, when most modern infrastructure was built, the population has doubled,” says former Wall Street banker Nomi Prins.

Nomi fortuitously left Wall Street before the financial crash of 2008, and since that time, she’s become a trusted voice of reason — because of her unique inside perspective — on matters of economic policy, the role of central banks and more.

Now in 2021, she’s turning her attention to our crumbling infrastructure, something she believes is a serious threat — not something that should be relegated to memes or political games.

“Not only are American roads, airports, electric grids, waterways, railways and more distinctly outdated,” Nomi says, “but today’s crucial telecommunications sector hasn’t ever been subjected to a comprehensive broadband strategy.

“The country is critically overdue for infrastructure development,” she claims. And this isn’t simply a matter of public safety anymore… as much as February’s deep freeze in Texas bears that out.

According to the American Society of Civil Engineers (ASCE) “The nation’s economy could see the loss of $10 trillion in GDP and a decline of more than $23 trillion in business productivity cumulatively over the next two decades” if infrastructure remains as-is.

Nomi points out: “Infrastructure could be the great equalizer in our economy.

“Over the course of American history, building infrastructure has not only had a powerful economic impact but regularly garnered bipartisan political support for the public good…

[Ed. note: Nomi’s not saying the Biden plan is a good or a bad thing… just a necessary thing.

And in the interest of you, the reader, she’s following the money: “Wall Street’s expectations are running high,” she says, “about what might prove to be a multitrillion-dollar infrastructure initiative.”

Many of this index’s stocks, in fact, could generate gains 900% greater than popular names in the S&P over the next few years.

Nomi has distilled it down to her five biggest potential winners, believing every American should own at least one of them.

Nomi will share the details on each of these five stocks Thursday, April 1, at 8 p.m. EST

He observes: “Anyone ‘stuck’ in these names endured some serious pain as money quickly rotated to other areas of the market. But now, we’re starting to see some of these [Nasdaq] stocks find a floor.”

“Despite a rocky start to vaccine distribution,” says avid science and technology watcher Ray Blanco, “vaccines in the United States are getting delivered at an enormous rate.

“Despite the size and diversity of the U.S.,18% of the population is now covered by a shot of some kind, meaning 118 millions shots have already been administered.

“Also meaning good things to come as we reopen the world,” says Ray.

As for investors, “We can look forward to an uptick in many companies long forgotten during the pandemic… think airlines, retail, casinos, etc.

“And with the recent market pullback we’ve seen,” he continues, “there’s a lot more room for these reopening stocks to grow.

“So the question is which sector is going to outshine the rest in 2021?” Ray asks. “Interestingly enough, I believe one of the best bets is a sector that had a stellar 2020…

“The market focused on biotech stocks in 2020,” Ray says. “Vaccine development was the only thing that was going to reopen the economy.

“Because of which, big investors started to take notice. Money poured into the sector, which allowed more research, better trial data and eventually better treatment for a range of diseases.

“Think about it: The Pfizer and Moderna vaccines were the first mRNA vaccines ever developed,” says Ray. “And while it usually takes companies years to develop a vaccine for a disease, these two companies did it in less than a year… with Johnson & Johnson not far behind.”

Considering all the public money these companies are raking in, biotechs are on a roll.

And Ray reminds: “MRNA vaccines have applications well beyond COVID-19 for treating other diseases.

“And for companies including Pfizer or Johnson & Johnson, public funding goes a long way toward developing other drugs well outside of mRNA applications.”

“Think about smaller companies,” says Ray. “Their drugs can be now reviewed — clinical trials that were shelved for COVID-19 vaccines can resume.

“Add to that the recent market pullback and you have a perfect opportunity to profit.”

“The difference between the two is IBB focuses on the biotech sector as a whole, and IBBJ focuses on biotech companies with market caps below $5 billion.”

But you should be aware: “IBBJ has a lot more potential for growth,” says Ray, “but that also means that it comes with greater risk.

“Take inventory of your risk tolerance,” Ray says, “and see if IBB or IBBJ would suit your investment style.”

Per Tuesday’s provocative episode about the one-time democratic socialist firebrand, a reader says: “I’m no AOC fanboy, but...

“If she’s seen the light on a more pragmatic approach to forming a governing coalition with Team Biden, all the better.

“The alternative is infighting and fragmentation that undermines any agenda for the center left, which more centrist observers and commentators started warning the most liberal elements of Congress and the Democratic Party about last summer.

“The alternative is delusional fools who think a Democrat in the White House means a golden ticket to every pipe dream — which it definitely does not. And the ultimate alternative is a return to power of the idiot fringe.

“You guys can crow if you like, but for me, AOC developing some political discipline is welcome news. And probably bad news for you guys, no matter how much mileage you get from calling her a hypocrite and a sellout.”

The 5: AOC shifting a smidge toward center — that’s one thing. Shifting toward the corporatist center… that’s another. But shifting toward textbook fascism? That’s something else entirely.

P.S. Right now, three economic mega-trends are barreling toward each other… and will likely converge in the weeks and months ahead.

On April 1 at 8 p.m. EST, Nomi will reveal what this means for your money in 2021… including her big prediction for the remainder of the year.

If she’s right, it could mean a phenomenal opportunity for investors.

Reserve a spot for yourself right now.