If this headline is supposed to make us breathe easier, it’s not working…

If you’re not yet familiar with “a vaccine passport concept,” allow our Jim Rickards to explain: “This would be a document of some sort, likely in digital form as a QR code on your mobile phone. If you have the COVID vaccination, you’ll get a QR code to put on your phone. With that, you’ll be able to board airplanes, attend concerts and sports events, go to classes and basically live life as ‘normal’…

“Without the QR code, your ‘papers’ will not be in order and you will be denied transportation, entertainment and educational options. It’s basically a way to force people to be vaccinated if they want to live a normal life.”

Before we go any further today, a disclaimer: Our purpose is not to take sides on the safety or efficacy of one or another COVID vaccine.

Rather, we are approaching the vaccine passport question from our business-and-commerce perspective… with an eye toward the increasingly ambiguous definition of a “private business” in present-day America… and mindful of what it still means to live in a free country.

With our disclaimer out of the way… we declare we stand foursquare with former Michigan congressmember Justin Amash, who went viral last week with this tweet… 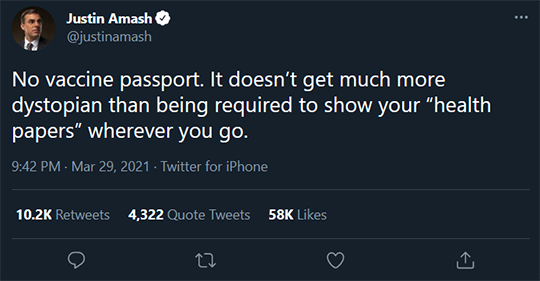 We also stand with the tireless journalist and civil liberties activist Glenn Greenwald: “I think you have to start,” he tells Fox News host Tucker Carlson, “with noting how draconian of an invasion this is in three different ways.

“Number one, coercing citizens to put a substance into their body… a pretty grave invasion of bodily autonomy… Secondly, gathering a new database that can track people in terms of their health that can be easily expanded… And then thirdly you’re restricting people’s freedom of movement. Freedom of movement is one of the most fundamental rights we have. It’s actually guaranteed in the Constitution.”

“A determination or development of a vaccine passport, or whatever you want to call it, will be driven by the private sector,” Psaki said last week.

“Ours will more be focused on guidelines that can be used as a basis. And there are a couple key principles that we are working from. One is that there will be no centralized, universal federal vaccinations database and no federal mandate requiring everyone to obtain a single vaccination credential.

“Second, we want to encourage an open marketplace with a variety of private-sector companies and nonprofit coalitions developing solutions.

“And third, we want to drive the market toward meeting public interest goals. So we’ll leverage our resources to ensure that all vaccination credential systems meet key standards, whether that’s universal accessibility, affordability, availability — both digitally and on paper.”

If Psaki’s consultant-y mumbo-jumbo sounds creepily familiar, it should: It’s the model by which the federal government is curbing free speech via social media.

This model gives Washington perfect cover, as we’ve described many a time before. Whenever Facebook or Twitter or YouTube gives someone the ban hammer, and someone else labels it censorship, the response from the power elite is inevitably, “But these are private companies!”

Yes, but those private companies are acting under the ever-present threat of stiffer taxation or regulation if they don’t act to curb “hate speech” or “misinformation.” They’ve been involuntarily deputized to act as the speech police.

Is there any reason to believe it wouldn’t happen the same way with vaccine passports?

The feds wouldn’t mandate a vaccine passport… but by using some combination of carrots and sticks, incentives and penalties, it wouldn’t have to. The database wouldn’t be centralized, but the feds would set standards for easy cross-referencing, in much the same way state driver’s licenses have been standardized over time into a de facto national ID card. (The standardization would also make it easier for hackers to access the data…)

We saw where all of this was going more than a year ago. We cited an article from the MIT Technology Review describing a vaccine passport. The author didn’t use that term, but it’s clearly what he meant.

“The intrusive surveillance,” he wrote, “will be considered a small price to pay for the basic freedom to be with other people.”

But to what end? A year later, as a practical matter, none of it is even necessary.

Back to Greenwald: “At some point soon we’re going to reach herd immunity because enough people, polls show, want the vaccine, such that the people who are unvaccinated don’t pose a threat to the society or anybody else.”

So what’s the point?

“Liberals have this kind of punitive strain in their politics, that they like the idea of being able to stigmatize people who don’t agree with them on vaccines by creating a second-class citizenry for them. I think that’s a big part of the motive.”

Does that ring true for you?

More important, depending on how the passport is enforced, what do you personally plan to do? Send us your feedback at this email address. If you own a business, we’d be especially interested in hearing from you.

Before we get to the markets, a pandemic postscript of sorts: The FDA has finally given the green light to an at-home COVID test.

As we’ve chronicled for more than a year, both the CDC and the FDA have botched the rollout of testing on a criminal scale. By late March 2020, no fewer than four companies had developed at-home tests. But then the FDA stepped in to forbid their use. Some customers who’d sent in a sample for analysis were informed those samples would be destroyed, the better to comply with

By last August, Abbott Labs had developed a $5 antigen test the size of a credit card that one-upped the original tests. You didn’t even have to send in a sample; you’d get at-home results in 15 minutes. But even though the FDA acknowledged the test is accurate, the ban remained in place.

Finally, as of last week, the FDA gave Abbott’s test the go-ahead. It will be available over-the-counter soon.

If you haven’t heard about this travesty until now, that’s because there wasn’t a way the elite media could spin it to make Trump look bad… nor could alternative media spin it in a way to make Trump look good. It’s just garden-variety bureaucracy… and so went unnoticed by nearly everyone.

To the markets, where precious metals are the standout performer.

Credit Suisse announced it would suspend its dividend and cashier a couple of executives after the Archegos Capital fiasco, which will cost the company $4.7 billion.

Otherwise, not much news for stocks to react to — there are no “big” economic numbers due until next Tuesday, and earnings season doesn’t start until a week from tomorrow.

From Japan, the story of a 7-Eleven that’s being built… in the parking lot of another 7-Eleven.

Actually, this is a follow-up to an old story: In the innocent pre-COVID days of January 2020, we related the plight of Mitoshi Matsumoto, a 7-Eleven franchisee who couldn’t find any help — not enough to stay open 24/7 anyway. So he started closing from 1:00–6:00 a.m.

The curtailed hours ran afoul of his contract, which 7-Eleven promptly terminated. But while he fought the termination in court, Matsumoto doggedly remained open for a few weeks — albeit only from 9:00 a.m.–5:00 p.m. — and gradually sold off all his stock. Once that was done, he posted a sign: “Closed due to legal battle, and COVID-19.”

Fast-forward to the present and 7-Eleven just began building a new store where the parking lot of the old one stood. You can see the construction underway from this vantage point… 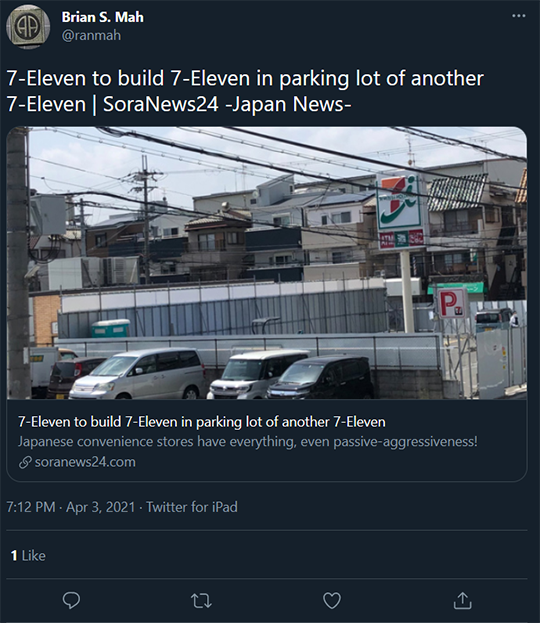 “This land itself is rented from a third party by 7-Eleven,” reports SoraNews24, “whereas the old building is still technically owned by Matsumoto, until the courts or he decides otherwise. This means that the company had to pay rent on an unusable lot for over a year now, but also has the right to use the space outside of the store however they see fit.”

Meanwhile, the court case remains unresolved. Which is why 7-Eleven corporate describes the new shop as “temporary.” Uh-huh…

“Rather than publishing gullible, ignorant blowhards,” a longtime reader writes after yesterday’s mailbag section of The 5, “I suggest you frame matters in terms of protecting and expanding individual freedom versus the expansion of government control and surveillance, which is more accurate and frightening.”

The 5: Sometimes, like it or not, ya gotta play defense. Which, come to think of it, is the point of our main topic today… 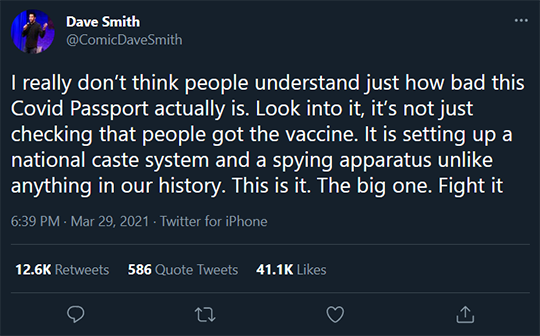 “I have a clue that might help in hunting down the earliest Daily Reckonings,” a reader writes after we put out a plea yesterday.

“I subscribed to The Daily Reckoning from instructions I found in the Oxford Club’s Communique. It was mostly likely in 1996 or 1997.

“Boy, those were the days. I practically lived for Bill’s daily musings and learned so much from him, including how to think critically. Good luck locating the early issues, and please write about it in The 5.”

The 5: Gosh, ‘96–97 sounds awfully early to your editor. Granted, I didn’t join the company for another decade, but I was already familiar with Agora-world as a subscriber to the legendary Strategic Investment newsletter.

But thanks for the clue — we’ll see where it leads!

P.S. In The Profit Wire, our “disaster insurance” plan is already starting to pay off — even with the Dow and the S&P hovering near record highs!

One of Alan Knuckman’s recommended protection trades just delivered a 50% gain after less than two weeks.

If you didn’t join The Profit Wire during our most recent new-member campaign, we regret to inform you that we’re bumping up against our subscriber cap again… so we can’t reopen it just yet.

But as soon as we can, we’ll let you know.