“While 2020 had the lowest number of new [drug] shortages since 2007, ongoing shortages are not resolving,” says the American Society of Health-System Pharmacists.

According to the FDA’s running tally of drug shortages, in fact, there are 116 drugs still listed as “currently in short supply.” Per last year’s shortages, here’s a breakdown by drug category (compared with 2016–19)… 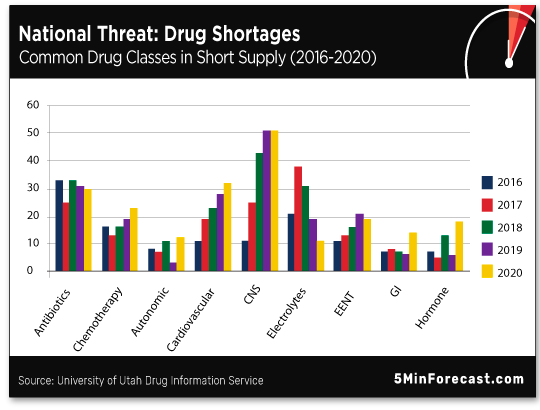 “Half of new shortages in 2020 were injectable products used in hospitals,” ASHP notes. “Hospitals experienced significant shortages of analgesics, sedatives and paralytics due to unprecedented demand created by large numbers of critically ill patients with COVID-19.”

Our science and technology expert Ray Blanco says: “Most of these drugs aren’t new therapies on the cutting edge of biopharmaceutical science.” Rather, many of these short-supply drugs “have been used for decades… because they work,” he says.

Including “lifesaving antibiotics, like azithromycin last year, used to treat everything from pneumonia to skin infections,” says Ray.

“Also on the list today are chemotherapy drugs like floxuridine, used to treat a variety of cancers.”

But shortages of these tried-and-true, decades-old drugs can spell disaster for patients. Take, for instance, the case of anticoagulant heparin (discovered in 1916) that was in short supply in 2008.

The reason? Heparin’s active ingredient, derived from pig intestines, was mostly manufactured in China. At the time, however, China “had a severe shortage of pigs after a virus ripped through the population, sharply increasing the price of the raw material needed to make heparin,” Ray says.

The short version: Chinese manufacturers cut corners, substituting a “knockoff” ingredient that made its way into Baxter International’s heparin, ultimately “kill[ing] 81 people and severely injur[ing] at least 785 others in the U.S.,” says Ray.

(China — then and now — denies any wrongdoing.)

To give an idea, “today, 80% of the active pharmaceutical ingredients (APIs) in the drugs we use are made in China and India,” he says. “Even India is dependent on China for 90% of APIs… for making essential drugs.

Production of penicillin? The original antibiotic? Ground to a halt in 2004…

“Fortunately, the COVID-19 crisis has exposed our dependence on offshore-made drugs and raised questions about their safety,” Ray continues.

Prompting Trump to sign an executive order in 2020, “requiring the federal government buy pharmaceuticals from U.S. manufacturers,” says Ray. “These orders have been backed by government money…

“The CARES Act allocated $3.5 billion to the Biomedical Advanced Research and Development Authority (BARDA) to fund the production of vaccines and APIs in the United States.

“And the DoD will use $100 million of its allocated CARES Act funding to support the efforts of the U.S. International Development Finance Corp. (DFC),” says Ray. “The DFC is looking closely at partnerships with companies to produce drugs and precursor chemicals in the U.S., evidenced by a memorandum signed with Eastman Kodak… provid[ing] a $765 million loan to launch Kodak Pharmaceuticals.

“Congress has turned its attention to this problem too,” Ray says. “Last year, the Senate introduced the Protecting Our Pharmaceutical Supply Chain From China Act, which would require greater supply-chain transparency… provide incentives to manufacture in the U.S. and cut off the sale… of Chinese-made drugs by 2025 to U.S. entities including Medicare and Medicaid.”

But calls to rebuild domestic drug manufacturing is about more than access to the medicines we need. “U.S.-based manufacturing would create hundreds of thousands of good-paying jobs for Americans,” says Ray.

“Savvy investors are sensing the sea change and positioning themselves to profit,” he says. 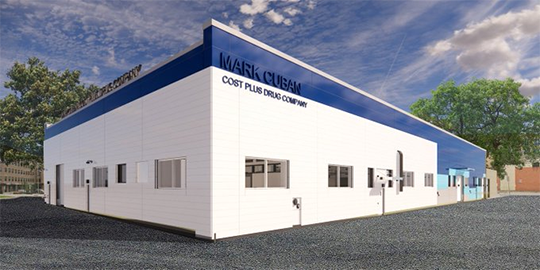 “… Cuban is investing millions to build a generics plant in the Dallas area.”

“All is well in the world of stocks,” says analyst Greg Guenthner, “for now.”

Greg’s takeaway: “With the averages posting new highs and the Nasdaq finding its mojo again, I still believe the market is just resting within the context of a bigger melt-up this month.” 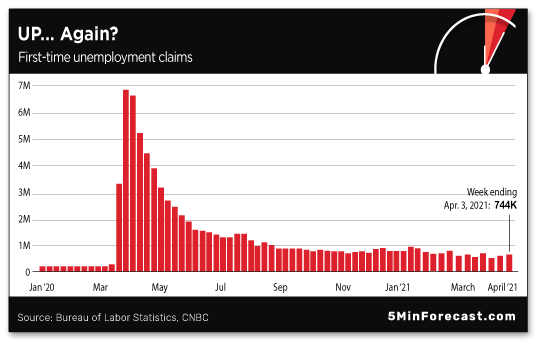 At the risk of repeating ourselves, that number is still persistently above the worst of the Great Recession. But some states are recovering from unemployment faster than others…

According to a WalletHub study comparing state jobless claims from March 2020 to March 2021, the five states that have rebounded most from unemployment are: Minnesota, Maine, North Carolina, Pennsylvania and, in first place, New Hampshire.

Feel free to draw your own conclusions…

“If you have the chance to make highflying profits, does it really matter which area of the market that money comes from?” asks wealth and income specialist Zach Scheidt. Rhetorically…

“When you have a group of stocks trading sideways… and then that sector breaks to a new high, there’s potential for a huge profit as new investors pile into new market leaders.

“And in the case of financial stocks,” he says, “three major forces are driving the entire sector higher.”

“When interest rates rise (specifically long-term interest rates like the 30-year Treasury yield), banks can charge more for the loans they offer,” says Zach. “That leads to higher profits and naturally drives stock prices for these financial firms higher.

“And as the economy reopens following the coronavirus crisis and businesses get back to normal, I expect to see rates continue to move much higher.

“As the world emerges from this coronavirus nightmare, financial companies will play a vital role in helping people and businesses get back on their feet,” Zach says.

“On the consumer side, we’re already seeing spending pick up in a big way. People are ready to go shopping, travel and enjoy being with loved ones again,” he says. “As purchases accumulate, banks will enjoy transaction fees.

“And businesses will also need capital to rebuild and get back to work,” says Zach. “This capital will be used to open new factories and businesses, hire more workers, purchase equipment and plenty more. So traditional banks will benefit from new loans at higher interest rates.”

“When the coronavirus crisis hit,” Zach says, “the Fed placed restrictions on the largest banks to keep them from returning too much capital to investors. All to say, the Fed wanted banks to keep plenty of cash on hand as a safety precaution.

“Now that the economy is in the early stages of recovering, it’s likely that these restrictions will be lifted,” Zach says. “Wall Street traders are anticipating more freedom for banks at the end of the second quarter.

“That means in the second half of 2021, we could see banks increase their dividends while also buying back shares,” he says. “When a company buys back shares, it decreases the number of shares outstanding. So every share you own represents a larger percentage of the entire company.

“With bank profits set to accelerate, fewer shares simply means there will be more profits (and more cash allocated for dividends) for every outstanding share remaining.

“This is shaping up to be a perfect environment for financial companies,” Zach says. “So it’s a great time to be invested in the strongest names in this group.”

“Vaccine passports should soon be a moot issue,” says a longtime friend of The 5 in response to Tuesday’s issue.

“In the next three months or so, everyone in the U.S. who wants the vaccine should have received it, and once vaccinated, why should they care whether those around them are vaccinated or not?

“When all this started over a year ago, we were told that herd immunity would be here when 60–80% of people were either vaccinated or had recovered. (Not part of the conversation much these days.)

“I will concede the whole ‘app on your phone’ that tracks your every move and is required for access to a wide variety of services reeks of totalitarian control. Not at first perhaps…

“What’s that about ‘give up a little freedom to gain a little security’? Seems applicable to the discussion of vaccine passports.”

Another 5 old-timer (not literally) says: “The arguments against a vaccine passport are just plain stupid.

“It would be no different from an ID card, passport, driver’s license or medical insurance card in your wallet.

“When you were 16, did the barkeep ask for ID showing your age? Did you argue with him that it was an infringement on your rights?

“If you are really against the vaccine passport (aka proof of vaccination), then dump all the other plastic and paper in your wallet to show that your personal freedoms are compromised.

“Let’s see some photos of you burning your driver’s license.”

“I own a small business in Kansas,” says another reader. “Life here has changed very little.

“That said, 2020 was a slow year for my business. My customers ship oil-field parts to me for repair. What do I care about my client’s medical condition? That’s his business.

“No passports for me.”

Succinct… We’ll broadcast a couple more readers’ missives, plucked from the corners of the digital mailbag. Join us tomorrow…

P.S. No doubt you’ve heard a lot about Elon Musk and SpaceX…

But here’s the story the media are not reporting.

It might be the biggest opportunity to profit in 2021.