“I’ll never forget Wall Street’s dark days in 2008,” says our retirement specialist Zach Scheidt. “I was working as a hedge fund manager and trying to minimize risk for clients.

“In fact, 13 years after the worst days of the crisis, financial stocks are just now breaking above their previous highs… 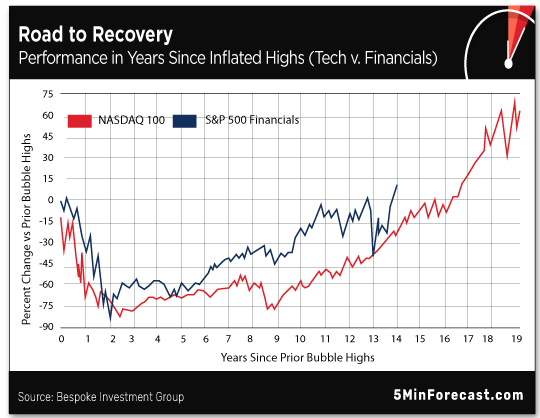 “The interesting thing about this chart is what happened to tech stocks when they experienced a similar multiyear pullback following the dot-com crash in 2000.

“As you can see,” says Zach, “once financial stocks broke out to a new high, they spent the next two years moving sharply higher.

“So if financial stocks are poised to surge higher the way tech stocks did starting in 2016, it’s going to be important for you to invest in these names.”

Zach says: “I would start with three stocks in different areas of the financial world that should all do very well in this market.

“First, we’ll start with Regions Financial Corp. (RF),” says Zach. “This regional bank should benefit from an overall reopening of the economy, which will lead to more personal and business loans being open.

“Banks like RF typically do well when long-term interest rates rise, because they can borrow money cheaply and then generate more profit by lending out the capital at higher rates.

“The stock pays an attractive 2.9% dividend yield. And at 11.2 times next year’s expected profits, shares will also benefit from an overall shift toward value stocks.

“My second financial stock for today is a much larger Wall Street investment bank,” Zach continues. “JPMorgan Chase (JPM) is a blue chip bank that will do very well as the economy reopens.

“The stock currently pays a 2.3% dividend. And if the Fed gives banks a green light to raise dividends, we could see these payouts increase.

“The final name I’ll share with you is one of my all-time favorite stocks,” says Zach. “The Blackstone Group (BX) is a private equity company that manages hedge funds and other investment opportunities that are typically only available to the most affluent investors.

“BX has a business model that generates profits in three ways:

“Over time, BX has built a financial empire that’s respected by institutional investors around the world,” Zach says. “The stock pays a 3.1% dividend yield, but these payments fluctuate depending on the profits BX generates each year.

“As interest rates rise, the economy picks up and these companies grow their profits, financial stocks should give investors some exciting returns,” Zach says.

“Make sure you invest some of your retirement wealth in these stocks so you can profit from this new breakout.

“It may be easy to hate Wall Street banks, but there’s no question they’re profitable,” Zach concludes. “Why not tap into those profits for yourself?”

“A group of seven Democratic governors is… urging President Biden to repeal the Trump-era cap on state and local tax (SALT) deductions,” says an article at The Hill.

The letter was signed by governors of New Jersey, Connecticut, Hawaii, Illinois and Oregon as well as beleaguered Govs. Newsom (CA) and Cuomo (NY).

“We must go further and undo the cap placed on state and local tax (SALT) deductions by the Trump administration through the Tax Cuts and Jobs Act in 2017,” the governors said.

If you recall, the TCJA capped SALT deductions at $10,000… and for high-tax states — mostly blue, by the way — state and local taxes can easily double $10,000 annually.

The governors’ letter continues, saying it “was heartening to hear Treasury Secretary Yellen agree to work with Congress to ease the $10,000 cap on SALT recently,” but Team Biden and Congress should “continue these efforts to relieve this immense financial burden on our residents and eliminate the SALT cap entirely.”

[We’re going to go out on a limb here… but wouldn’t it be in residents’ best interest to lower onerous state and local taxes? Rather than depend on federal SALT deductions? Then again, that makes too much sense… heh.]

And this is interesting…

“Democrats pushing for a repeal of the SALT cap have an unlikely opponent: Jamie Dimon,” CNBC says. Ahh, Dimon! The bank CEO we love to hate… 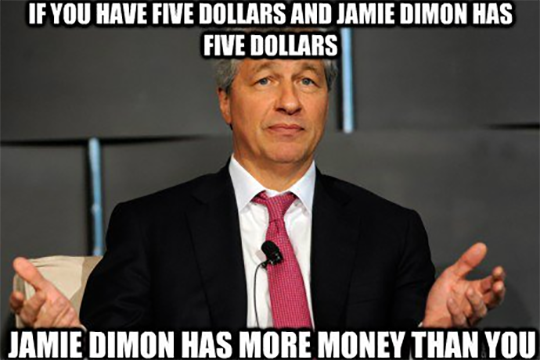 JP Morgan’s top brass must be trying to rehab his image… or something? “In his annual shareholder letter, the chairman and CEO of JPMorgan Chase took aim at a host of carve-outs and loopholes in the tax code.”

Dimon, in fact, objects to repealing the SALT cap on the basis it will mostly benefit the wealthy. “According to the Tax Policy Center, more than 96% of the benefits of a SALT repeal would flow to the top 20% of earners,” CNBC notes. And “57% of the benefits would go to the top 1%.”

But Dimon urges wealthy Americans to take one for the team…

After flipping through the digital pages of Dimon’s expansive letter, we stumbled on this gem: “If the wealthy paid more in taxes and the money was put to good use,” Dimon says, “they would be the main beneficiaries of a stronger economy.”

See what he did there? So much for altruism…

“China’s aggressively forcing its trading partners in Asia and the Middle East to transact in yuan,” says our macro maven Jim Rickards, reporting on de-dollarization.

“China’s also creating a yuan bond market,” he says, “so countries… can invest in yuan-denominated government bonds instead of being forced into buying U.S. Treasuries.”

Jim says: “I’ve been warning about the collapse of the U.S. dollar’s role as reserve currency for years. Critics often retort that it hasn’t happened yet. But there’s reason to believe the dollar will be knocked off its perch and have to share the reserve currency spotlight.”

And Jim offers this timeline: “This process is in the early stages and will probably take 10 years or longer to have a major impact.

“But it could happen faster because of improved payments technology, the coming digital yuan and the fact that confidence in the dollar is already eroding.” 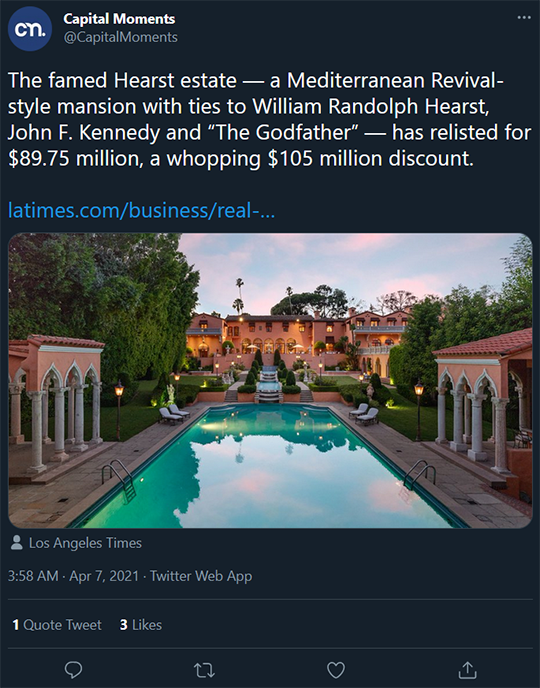 “This eight-bedroom, 15-bathroom property was built in 1927 by architect Gordon Kaufman and was purchased by Marion Davies for her partner, William Randolph Hearst, in 1946,” Architectural Digest reports.

“At 29,000 square feet, the main house on the property is rife with over-the-top amenities like a two-story library, an Art Deco nightclub, a screening room, two separate apartments for staff or guests, a five-bedroom gate house, an Olympic-size swimming pool and a tennis court.”

According to The Los Angeles Times, longtime owner Leonard Ross put the estate on the market for $195 million in 2016. No takers. So Ross, deeply in debt, went bankrupt.

In other words, the Hearst Estate is an ultra-fancy foreclosure…

“Your ‘old-timer’ is missing the boat with his analogy of a vaccine passport and a driver’s license,” a reader writes.

“There are laws against serving alcohol to minors; thus, proof of age is required. There are no laws (yet!) mandating proof of vaccine to enter a public building or board public transportation.

“If the powers that be want to impose this level of legal restrictions on what many consider to be basic rights, let them introduce the legislation, so we can see who stands where on the question. That would be an interesting debate!

“Instead, the public-private consortium of unelected policymakers and corporate power brokers is conspiring (openly) to impose these anti-liberty measures *without a legal mandate*!

“This is what I, as a freedom-loving American, object to most strongly. While I would oppose any effort to pass such measures, I would grudgingly obey the law.

“When coerced, however, through commercial restrictions and public opinion manipulation, into giving away my fundamental right to freedom of movement and control of my body and my personal health data, I will resist, asserting my rights under the Constitution. End of story.

“I will boycott any business requiring a ‘vaccine passport’ in any guise, and oppose any laws designed to require it.

“But in my view, the ‘no big deal’ attitude to surrendering our freedom is what’s ‘just plain stupid.’

“Thanks again for the great work.. The 5 is my only never-miss daily read.”

Fair enough… Enjoy your weekend, and we’ll be back Monday.

P.S. We have an unusual request from The 5’s founding editor Addison Wiggin…

He’s looking for any Daily Reckoning emails that went out before July 27, 1999. Because the DR website’s archives are incomplete, we need help filling in some gaps.

Why the sudden interest in digital archeology? Addison’s not saying. But if you’re holding onto any of our 22-year-old emails, please pass them along to us at feedback@5minforecast.com. We’d appreciate it!