Well, if the mainstream insists on beating this theme to death, we’ll insist on continuing to push back against it… 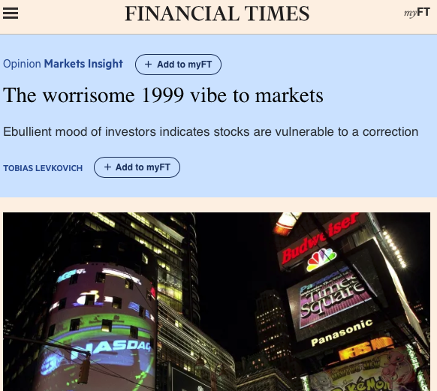 “For equity markets, the parallels between current conditions and those of 1999 are striking and worrisome,” writes Citi’s chief U.S. equity strategist Tobias Levkovich in the Financial Times.

“The investor mood in markets has been in ebullient territory since last November, when high-efficacy vaccine news lifted spirits as a budding light at the end of the tragic pandemic tunnel.”

Really? Only last November? Not last spring, when the Robinhoodies were bidding up the shares of bankrupt companies like Hertz? Why November?

To be fair, Mr. Levkovich has some figures to back up his assertions. They deserve a closer look.

The “ebullient territory since last November” is based on Citigroup’s Panic/Euphoria Model, a gauge of investor sentiment that “takes into account factors including the amount of investor positions anticipating a fall in stocks, the level of funds borrowed to purchase securities and commodity price futures.

“The last time we saw such an upbeat zeitgeist that did not coincide with an immediate equity market correction was in 1999 when the dot-com bubble was in full bloom. Typically in the past, when our gauge is at such high levels, it would indicate a 100% probability of lower share prices over the next 12 months.”

Ah, so THE BIG ONE didn’t actually come right away when the model suggested it would in 1999. Which makes the headline a bit misleading, no? (The stuffy Financial Times, engaged in clickbait? Say it ain’t so!)

And in fact, Mr. Levkovich is not bailing from the market altogether. Rather, he says he’s choosing not to “chase the rally” right now. He’s opting for companies in a position to raise prices on their customers, “as well as those names that have strong balance sheets and offer better-than-average dividend yields.”

Last year was when new retail investors with time to spare and money to burn — amid a pandemic and stimmy checks — started piling into the market.

It was a moment akin to 1995, when a critical mass of people — previously intimidated by the thought of filling out paper forms to open a brokerage account and getting on the phone every time they wanted to place a trade — began to open accounts online.

So in terms of “retail participation” in the present bull market, it’s still early days.

Every year since 1998, the Gallup pollsters have been asking people whether they have money in the stock market — including mutual funds, 401(k)s and IRAs. The percentage responding “yes” was consistently in the high 50%s and low 60%s, even during and after the dot-com bust.

It was only after the Panic of 2008 that the number dropped meaningfully… and it has yet to recover. 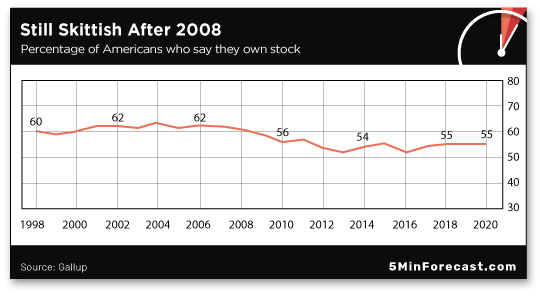 Gallup asks this question every year in early April, so its latest findings should be out soon. We suspect the number will have risen measurably… but still remain below pre-2008 levels.

Once we get past that threshold… yeah, then we’ll start to worry, at least a bit.

If you’re one of our longer-term readers, yes, we’re in a strange position saying all this.

We’re feeling a little reflective this morning; it was on this day in 2007 that our founding editor Addison Wiggin hit “send” on the debut edition of The 5 Min. Forecast.

It was a few weeks earlier that Time magazine lumped in Addison with a motley crew of financial renegades it dubbed “The Armageddon Gang.”

At that time, the earliest tremor of what would become a financial earthquake had already been felt; HSBC warned in February 2007 it would book steep losses from souring mortgage debt.

But to suggest anything on the scale of September 2008 was in the offing? That was tinfoil-hat territory.

They had a luxury Addison did not. By and large, they were mere pundits and loudmouths — people with a platform. If they were wrong, only they would suffer the consequences.

Addison, on the other hand, was running a financial publishing firm. Newsletter subscribers relied on our team for guidance about what to do with their money during highly uncertain times. It’s a responsibility he did not take lightly.

Yes, it looks nuts out there. A monster rally off pandemic lows 13 months ago, thanks to torrents of EZ money from the Federal Reserve, Congress and the White House. GameStop. Dogecoin. A New Jersey delicatessen that’s publicly traded and has a $100 million market cap.

In light of all the money-printing, gold is once again sound protection against the madness emanating from Washington, D.C.

But it would be foolhardy for us to suggest you go all-in on gold. Not when the masses have only begun to pile into stocks again and the biggest gains from the post-2008 bull market are ahead of us.

Call it a “melt-up” or a “crack-up boom” if you like. But unless you’re already independently wealthy, you can’t afford to hide out exclusively in precious metals and other hard assets.

With that in mind… your editor is venturing back to our firm’s Baltimore headquarters for the second time in only six weeks.

If you’re feeling even a twinge of skepticism that the stock rally still has legs, we’ve got something cooking that will offer ultimate peace of mind. Stay tuned…

To the markets, which are quiet as traders brace for the resumption of earnings season tomorrow.

Precious metals are steady — gold at $1,779 and silver at $26.12. But oh, my, copper — up a dime to $4.43. It’s been a decade since copper was last in this heady territory, and it only makes sense; whatever the merits of “greening” the economy, it can’t happen without copper.

“Will we push higher on strong tech results? Or will investors sell the news, causing even more chop in the sector? This should be an interesting week that could tell us a lot about what to expect from the market post-earnings. Sell in May and go away, or continue to rip into the summer months like we saw in 2020?”

There might be some politics-driven turbulence now through Wednesday; the president delivers an address to Congress Wednesday night to push for his economic overhaul. There might be a drip-drip of specific proposals that could generate a knee-jerk reaction in the market, not unlike what happened last Thursday.

The big economic number of the day suggests the “recovery” is proceeding more slowly than conventional wisdom would have you believe.

Orders for durable goods — anything designed to last three years or longer — grew 0.5% in March. The “expert consensus” among dozens of economists surveyed by Econoday was looking for a 2.0% increase; not one of them guessed the actual figure would be this low. And it doesn’t begin to make up 0.9% drop the month before.

To be sure, this figure is skewed by orders for aircraft and military hardware, which are notoriously volatile from month to month. But even stripping those out, the “core capital goods” number is also a disappointment — up 0.9% in contrast with expectations for a 1.5% jump.

Speaking of the president’s economic overhaul, we have to call out a silly sign-of-the-times article at The Hill, which begins thus…

“Republicans say fiscal conservatism simply isn’t the GOP rallying cry it used to be, and that’s making it much harder to counter President Biden’s push for trillions of dollars in new government spending.

Not that there’s anything inaccurate about that, but…

When we began sending these daily missives 14 years ago today, the national debt totaled $8.8 trillion. Today? $28.1 trillion. More than triple.

The article spills much digital ink on how Donald Trump shifted the party’s priorities away from those of the tea party movement a decade ago. “It’s almost like now debt, deficits, spending become abstract issues that a lot of folks aren’t paying attention to and should be,” laments Sen. John Thune (R-South Dakota).

Memo to Mr. Thune: It was never important to the Republican Party. (He knows better, but he has to play to a certain crowd.)

It wasn’t important under Ronald Reagan, who nearly tripled the national debt in only eight years despite raising taxes 11 times.

It wasn’t important under George W. Bush, who launched two costly debacles in 2003 — the Iraq War and Medicare Part D.

And much as our readers didn’t want to hear it at the time, it wasn’t important during the Obama years, either. When Mitt Romney chose Paul Ryan to be his running mate in 2012, tea party types rejoiced — and gave us an earful when we called out Ryan as a total phony. (By the time he became House speaker in 2015, everyone had come around to our point of view.)

Anyway, enough ranting on our part. We want to hear from you. Do deficits still matter to you even if they never mattered to GOP leaders, except as fodder for fundraising letters? Send us your thoughts and we’ll share them starting Wednesday.

“Glad to hear that $400,000 a year feels different based on where you live,” a reader writes after our deconstruction of the president’s plan for income taxes.

“The same could be said for $15 per hour. The small business I fortunately sold a few years ago would have gone under if we had to pay our part-time staff that much.”

The 5: Which is one of many reasons it’s a good thing that a $15 minimum wage didn’t make it into the $1.9 trillion spend-a-palooza signed into law

On the other hand, if you were still running the business, you’d now be competing with extended unemployment bennies. Per University of Chicago economist Peter Ganong, the current $300 a week means “42% of workers are making more than their pre-unemployment wage.”

What a time to be alive, right?

However long you’ve been with us — whether you started getting this e-letter as a supplement to a paid subscription last week or if you’ve put up with us for the whole 14 years — we thank you for your readership. And for your trust — which we know we have to earn anew each day.