“Rates of entrepreneurship have been declining in the United States since the 1970s,” says tech writer Christopher Wink at Technical.ly. “Recessions don’t always help.”

The prevailing myth that business innovation is a byproduct of economic downturns — big tech platforms, for instance, that emerged out of the Great Recession — simply doesn’t hold water.

“For all the entrepreneurship cheerleading of the last 15 years, the Great Recession accelerated an already alarming decline in new business formation in this country,” Mr. Wink says. “In the United States, our rates of entrepreneurship have been declining for decades, and those new firms that have been created are employing fewer and fewer people.”

Here are a couple factoids that prove his point… 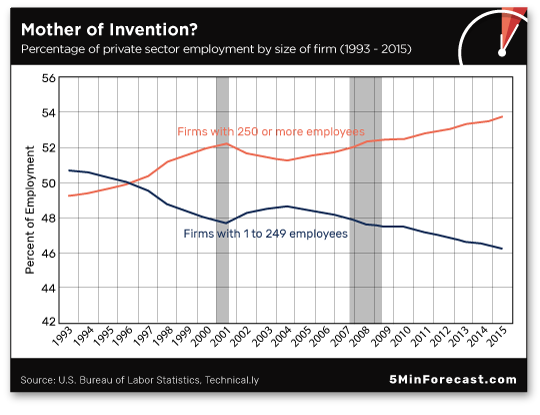 “The gap has steadily grown since, aside from a notable blip in the early 2000s,” Wink says. “The biggest single percentage increase was between 2007 and 2008, as the Great Recession took hold…

“Though our outsized venture capital market means we have a high share of iconic, rocket-ship growth companies, the United States is lagging other rich country peers in the crucial middle category: new, growing, innovative companies trying to bring efficiencies to industries that may last,” Wink concludes.

Particularly post-COVID, Addison observes the government’s response to companies: “If you’re big enough, [it] comes with a fat government check. If you’re small, like, say, a restaurant owner, good luck; stand in line for your skinny ‘stimmy check.’”

That said, Addison’s takeaway after his discussion with Mr. Gilder: “Successful entrepreneurialism and innovation don’t require a lot of capital or even the rule of law.”

Mr. Gilder has always believed entrepreneurs offer the best path forward — starting from his days of writing speeches for Ronald Reagan through being named America’s No. 1 futurist… and into the present day.

“It’s amazing to see how the stock market has shrunk — that is in the number of public companies,” Gilder says.

“Yet we find the stock market is described as if it’s in some kind of amazing boom and huge new value is being created. [When] most [money] is migrating up” to a few big tech companies.

“It’s also amazing to see the absurdities that are pursued seriously by the political class,” he says. Ahem… the Fed’s uninhibited money printing?

“Politicians are getting more obnoxious every day. They want to completely debauch all the money in the world.

“I think when money really gets debauched,” he says, “it is no longer a guide for entrepreneurs.

“Despite the political distractions… around us,” Gilder says, “I think increasingly investors have to invest in the world.

“They can’t just focus in the United States, as they could before,” he says. “At one time, you really could have a plausible investment program that was devoted chiefly to U.S. companies.

“Now you have to find where the new value is really being generated. It’s all over the place, and politics will be less important.”

It’s really about markets that have “the freedom to learn how to make a living,” according to Gilder. In that light: “It’s a mistake to imagine that productivity and growth have stopped.

“It’s now diverted into nooks and niches and global sweet spots that collectively are producing a steadily improving standard of living that has been suppressed by politicians,” he concludes.

And George Gilder — who forecast the impact of the microchip — believes this nascent technology will usher in a trend that could generate trillions of dollars in the near future.

The best part: The company that makes this bleeding-edge technology is almost completely unknown to mainstream investors.

And it’s based 2,686 miles away from Silicon Valley…

But according to George and his team of analysts, this little company could be on the cusp of doing something extraordinary.

Get the full story… before it’s pulled from the internet at midnight Friday.]

Mr. Market seems to be holding his breath…

About that Fed decision? More on that tomorrow…

“What do you think when you see the words ‘reverse mortgage’?” asks retirement specialist Zach Scheidt.

“Many people think reverse mortgages are a bad idea,” he says. “Until recently, even I thought this tool was more dangerous than helpful.

“But as I’ve done more research, I’ve realized that in some cases, a reverse mortgage can increase retirees’ quality of life.”

Particularly for “retirees who are worth a lot of money on paper because they have equity in their homes but that money is trapped and they can’t access it to pay for day-to-day expenses or for that trip they always wanted to take.”

First things first: You must be at least 62 years old to qualify. So with that in mind…

Zach says: “A reverse mortgage is simply an agreement with a lender where you borrow against the equity in your house. Instead of making payments on your loan, the interest just adds to the amount of principal owed over time.

“Many retirees receive a monthly payment from their reverse mortgage, which slowly accumulates into a larger loan,” he notes.

“Some reverse mortgages are structured in such a way that they actually pay a set monthly amount even if the total loan exceeds the value of your home,” says Zach. “So if you have a long and fulfilling retirement, you can continue to receive your payments for the rest of your life.

“For these specific reverse mortgages, you or your heirs will never have to pay the balance back.

“In this case, you could still be building wealth with your home while receiving the income that lets you enjoy your retirement to the fullest.

“Reverse mortgages aren’t for everyone,” Zach cautions. “If you have plenty of income from a pension plan or a retirement account, this may not make sense for you.

“But if you’re one of many Americans with equity in your home and not enough income for retirement,” he says, “I’d encourage you to talk to a reputable mortgage professional to see if this tool would work for you.”

At least that’s what medical marijuana online platform NuggMD reports after requests for telehealth appointments increased almost 50% in March from the month before. And that’s just an average across the nine states where NuggMD operates.

More specifically, in Pennsylvania and Missouri — where recreational marijuana is still illegal — the company says requests for online visits with doctors who can approve medical marijuana cards increased 70% in March versus February.

“The likely reason: those $1,400 federal stimulus payments that many Americans received in late March,” Boehm says. 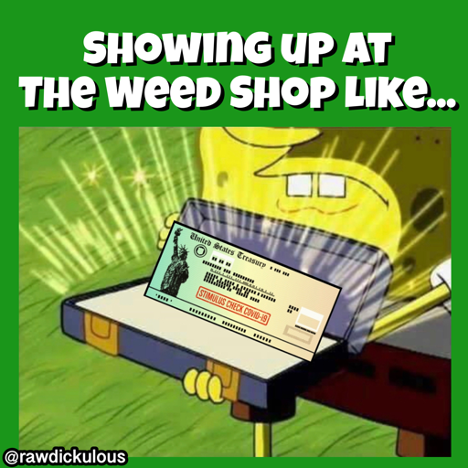 “NuggMD says the biggest increase took place during the week of March 14–20 — which is not-so-coincidentally the exact same period of time when ‘stimmies’ started landing in bank accounts.”

In general, the marijuana market was set ablaze by the pandemic in 2020, with legal cannabis sales reaching $17.5 billion — close to a 50% increase from 2019.

And there’s no dismissing a cause-and-effect relationship between the pandemic’s annus horribilis and Americans looking for relief, if only relief from boredom.

“Getting really stoned is a way of exploring your own mind when other forms of adventure are verboten,” says Reason’s Liz Wolfe… who herself sounds really stoned. “People need play, and when that’s been taken away… you must make do with the plaything of your own mind.”

“Still, the correlation between the federal stimulus payments and Americans’ spending on marijuana… raise[s] some interesting questions for policymakers grappling with the effectiveness of the federal government’s pandemic response,” Boehm says.

“Is this proof that direct stimulus payments weren’t really necessary, or that they should have been limited to a smaller group of recipients who were truly needy?” he asks.

With what we’ll call a rhetorical flourish…

“As a conservative/libertarian voter now in my mid-60s, I have to admit what you said must be considered,” says a reader referencing Monday’s episode of The 5.

“If the Elephant party really cared about the deficit, they could have made better decisions over the years.”

“Of course deficits matter,” says our final contributor today. “They just don’t matter to the dumb*** electorate who keep returning the same dumb*** representatives and senators to D.C….

“… who then take their re-election as a mandate to continue driving the deficit up to comic book levels. So eat, drink and be merry, for tomorrow we die!

“P.S. Happy 14th Birthday, 5 Min. Forecast. I wasn’t there on day one, but I found you in year one, and I can attest history has proven you to be right far more often than wrong.”

Thanks for the well wishes. Glad you appreciate The 5… as much as we appreciate our loyal readers.

We’ll be back tomorrow. Take care!

P.S. 2,686 miles east of Silicon Valley, one tiny American company could hold the key to unlocking a trillion-dollar industry.

Industry insiders forecast its revenues will grow 2,500% in the next two years… yet it’s still almost completely unknown to regular investors…

Here’s the invitation… but accept before Friday at midnight.