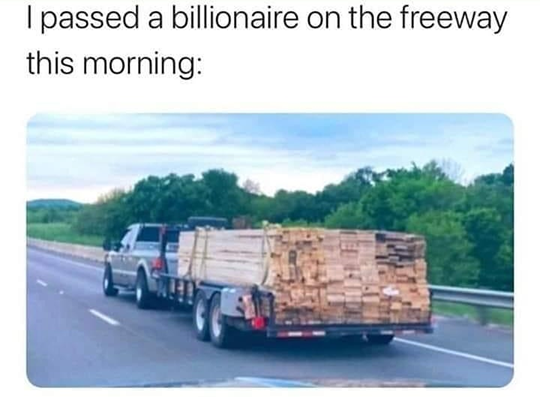 “Supply of raw Southern pine timber is in a sustained glut,” Dan says, “while demand for sawmill products seems to be in a structural bull market.”

We’ll hear more from Dan later in today’s episode… But for now, we give the floor to his colleague Nomi Prins, who explains soaring lumber prices and more…

“My real estate broker friends are all talking about the insanity of residential homes selling without anyone even looking at them, let alone conducting normal inspections before signing on the dotted line,” Nomi observes.

“Personally, I think it’s ridiculous to bid a house up 50% or 100% and fork over a boatload of cash, no inspections, no questions asked,” she says. “Not because I don’t believe in the long-term economic benefits of homeownership and the value of an appreciating asset.

“The supply of existing homes for sale looks set to stay low for the near future,” Nomi says. “Indeed, existing home sales for the month of March dropped even as the prices of homes rose.

“According to the National Association of Realtors, closed sales of existing homes in February dropped by a larger-than-expected 6.6% versus January, though that still kept existing home sales on pace for a seasonally adjusted rate that was 9.1% higher than February 2020.

“Because the number of homes for sale in suburbia has steadily shrunk, many Americans are choosing to stay put in their current homes,” says Nomi.

“Meaning people staying in their homes are more likely to remodel or do small renovations as they adapt to work-from-home conditions.

“Which is why the latest survey by the Remodeling Market Index (RMI) indicates that almost twice as many respondents consider the overall market for remodeling better than it was in the fourth quarter of 2020.

“Only 4% of those surveyed said prospects for remodeling were worse than that same time period,” Nomi says.

Another byproduct of the real estate boom…

“The federal government is thinking along those lines too,” she says. “President Biden’s newly released fiscal year 2022 budget calls for a total of $68.7 billion for the Department of Housing and Urban Development. That’s an increase of $9 billion — or 15% — over 2021 levels.”

And remember the billionaire lumber baron up top?

“According to the National Association of Home Builders, skyrocketing lumber costs will add more than $24,000 to the price of the average new U.S. house,” Nomi says.

Nomi concludes: “With U.S. housing supply so tight relative to demand, prices will keep rising.” She forecasts enormous “profit potential for stocks in the booming housing, construction and remodeling environment.”

[Ed. note: If you missed the world premiere of the “Economic Super Convergence” Event, you can still watch the replay to see what she revealed.

Nomi is convinced not only could this be the No. 1 opportunity of the year… but maybe even the entire decade.

Why? Because she’s found five tiny reopening stocks poised to soar… And she’s landed on the date of a very specific event. And that date is rapidly approaching…

If breaking news out of the White House holds true, the gains could happen way FASTER than she anticipated. So these tiny stocks could really go on a tear at any moment.

Carve out some time in your day to watch — with no obligation — before these “Super Convergence” stocks take off.]

“It’s only April, but 2021 is shaping up to be a great year for investors,” says our quantitative analyst Jonas Elmerraji.

But what about too high, too fast?

“Fact is, markets can remain at or near their all-time highs much longer than most folks realize,” Jonas says. “In fact, a study we did last year showed that nearly half of all trading sessions in the past 92 years have closed within 10% of all-time highs.

“Hovering near record highs is the market’s ‘normal territory,’” he asserts, “not a sign of an impending crash.”

To the market today, the S&P Index has backed off another all-time high this morning, settling at 4,195.

The latest Consumer Price Index (CPI) number for March came in at 2.6%, up from 1.7% in February…

“Reported inflation is accelerating higher due to comparisons to the COVID-driven economic shutdown of March–April 2020,” Dan Amoss explains.

Per the FOMC meeting yesterday, he says: “The Fed acknowledged that inflation has risen, but brushed it off, saying that it’s only due to ‘transitory factors.’ Maybe the Fed will be right about this in the short term.

“But as my colleague Jim Rickards explained in the April issue of Strategic Intelligence, the demographic factors and psychological factors that have limited inflation in recent decades are shifting.

“Labor forces around the world are peaking, as retirements accelerate and income-support programs from governments are ramping up,” Dan continues.

“The median American voter thirsts for the government to play a larger role in the economy… and it seems unquenchable.”

That notwithstanding, he concludes: “We could be on the verge of a decade-long shift in economic power from capital to labor (driven by market forces, not just government policy).

“If that’s the case, then most investor portfolios remain dangerously overweight deflation-friendly assets that did well in the 2010s — like large-cap growth stocks and government bonds — and very underweight precious metals, natural resources and small-cap value.

“I expect these three categories of assets to enjoy multiyear performance tailwinds.”

In other words: Got precious metals? Hard Assets Alliance has got you covered. (You should know we believe in what HAA can do for everyday investors… So much so, our firm took a stake in the company.) 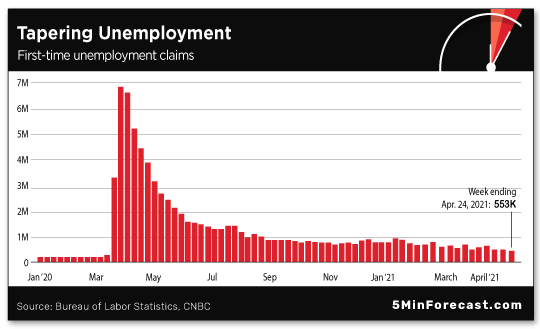 “The streak of declining claims started in mid-April, with a surprise drop of more than 175,000. Now economists think the trend will continue,” The Washington Post says.

“This time last year, more than 3.4 million Americans were applying for initial unemployment benefits, and the national unemployment rate was between 15–20%.” And the most googled question: How do I file for unemployment?

Should you need a comparison for today’s unemployment stat, the high-water mark in October 1982 was at 695,000… So still a long way to go.

The Clean Commute for Kids Act would allocate $25 billion to make the nation’s fleet of school buses electric in the next decade.

Gas- and diesel-powered school buses comprise 90% of U.S. buses and passenger about 25 million students per school day. (Well, in pre-pandemic times.) “Emissions from diesel engines may contribute to respiratory illnesses in children, studies have found, and have been linked to poor academic performance,” the AP says.

The push to make school buses “green” isn’t new. Vice President Harris, when she was a U.S. senator, introduced legislation in 2019 to earmark $1 billion in federal money to electrify school buses.

Not surprising, then, the Clean Commute for Kids Act is co-sponsored by Sen. Alex Padilla (D-CA) — otherwise known as Kamala Harris’ replacement — and would “authorize federal grant money over 10 years, with 40% of it devoted to replacing school buses that serve mostly nonwhite, poorer communities,” The Associated Press says.

[So we might have electric school buses… before they come equipped with seat belts?! Just a thought.]

“Quick version of GOP attitude toward debt and deficits: Consider what Jim Rickards and others say about Modern Monetary Theory,” says a longtime reader.

“In 2003, Dick Cheney is reported to have said: ‘Reagan proved that deficits don’t matter.’ (Which neatly leapfrogs having to read George H.W. Bush’s lips… But let’s face it, his administration fully embraced MMT.)

“Then toward the end of Donald Trump’s administration, the Federal Reserve bailed on using inflation when the national debt and spending were getting out of control. Which dovetails nicely with Trump declaring himself the ‘king of debt’ before he ran for office.

“Just so you don’t think I’m completely one-sided here, the Democrats have been known as ‘spend it all’ and then some for as long as I can remember, and I’m 70. At least the current president has made overtures toward paying for part of his infrastructure plan.

“The current debt level is, in my opinion, unsustainable. Fixing this (again, my opinion) will require a ‘jubilee’ reset of biblical proportions, and probably a return to some form of a gold standard — to which the politicians and powers-that-be will have to be dragged kicking and screaming since it will severely limit their ability to ‘fix everything’ for us.

“On a personal note to Dave: Have a good time in Baltimore. I will be enjoying cherry and apple blossom season here on the west coast of Michigan’s Lower Peninsula.”

“Thanks to an edition of The 5 last week, I just finished reading John Englander’s Moving to Higher Ground.

“Were it not for my daily reading of The 5, I would not have known until some unknowable time in the future about the unstoppable phenomenon of Sea Level Rising (SLR) and its inevitable indirect effect on practically every kind of financial investment that we might choose to make.

“Of course, I remember a line from Laugh-In, many decades ago, that began: ‘Today the governor of California, from his office in Denver, declared…’

“When will you be announcing the relocation of your Baltimore offices?”

The 5: Thanks for the complimentary email…

During Addison’s interview with Mr. Englander, he mentioned our campus in Mt. Vernon, Baltimore. Addison’s take? “The higher the sea level rises, the more our properties become waterfront properties… and thus more valuable.”

P.S. Dr. Nomi Prins has already gone on record predicting gains of 900% — over larger S&P 500 names — for some under-the-radar stocks over the next few years.

And that was BEFORE she heard about this breaking news.

Right now, she’s agreed to share this opportunity with you.

So don’t go anywhere… get ready to see all the details of this historic opportunity.