“I’ve been saying how collectibles… have been seemingly, like, going kinda bananas,” says Dave Portnoy of Barstool Sports.

“Here’s what we’re doing: Our first NFT is going on sale.” 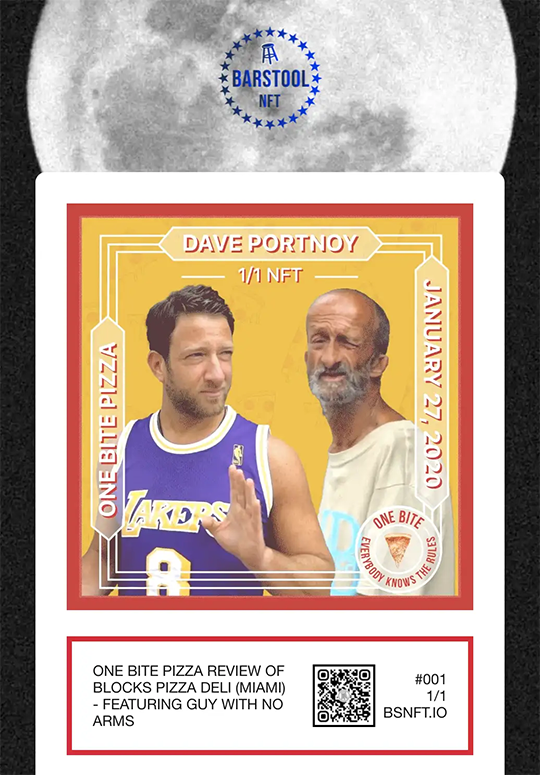 Along with the non-fungible token — a blockchain-protected video clip of Portnoy reviewing a Miami pizzeria — he sweetens the deal. “Whoever buys that NFT, I will then fly them out, and we will watch a game together,” Portnoy offers. And there’s a sports wager involved… because of course there is.

If Mr. Portnoy seems vaguely familiar, that’s because he made an appearance at The 5 last summer when he joined the ranks of bored day traders, tweeting: “I’m sure Warren Buffett is a great guy… but when it comes to stocks, he’s washed up. I’m the captain now.”

(No one can accuse him of low self-esteem.)

Regarding his latest preoccupation, Portnoy concludes: “NFT, NFT, NFT… Maybe we missed the boat. Maybe it’s worth a lot of money? Maybe it’s not.”

The wealthy have access to all kinds of opportunities that you and I could never touch… “I’ve heard variations of that complaint ever since I started my investment career more than 20 years ago,” says our retirement specialist Zach Scheidt. “And it’s often true!

“For centuries, affluent families have used their wealth to invest in farmland, small businesses, mines or mineral reserves, oil wells, royalties or any number of other assets.

“And those investments have generated income and led to even greater wealth.

“Meanwhile, ‘normal’ families like yours and mine have been shut out of these opportunities,” he says. “Thankfully, a lot has changed over the last few years…

“Financial technology (or FinTech) — along with some good old-fashioned creativity — has opened many elite markets to the masses,” says Zach.

“Historically, the art world has belonged exclusively to high-net-worth investors,” he continues. “Many works of art go for tens of thousands of dollars each — and sometimes six or seven figures.

“Even if I could come up with the money to buy one of those pieces, it probably wouldn’t be wise to put that much of my family’s wealth in one single investment,” he says.

“But that’s starting to change,” Zach asserts. “This past weekend, my brother asked me to take a look at an art exchange called Masterworks.”

(Please note, I’m not recommending Masterworks or any of the art they have listed. But I do think it’s interesting to consider.)

“Masterworks allows individuals to take a fractional investment in specific pieces of art.

“It’s a creative way to help middle-class investors tap into this unique market without spending [on] an entire piece of art,” Zach says.

“Here’s how it works: An exchange like Masterworks purchases a piece of art through a business structure like a limited partnership.

“Investors can buy shares of the business, thereby owning a certain percentage of the work of art,” Zach explains. “When the artwork is eventually sold, the partners receive their investment back plus any profits on the sale.

“And partners have the opportunity to sell their position to another investor at whichever price is negotiated between the buyer and seller.

“I did limited research,” says Zach, “and found that there are a few Masterworks competitors that have similar investment offerings.

“Arthena, for example, is one company that helps create custom products for institutional and individual art investors,” he says. “And Saatchi Art is an online gallery featuring art from many different creators around the world.”

Zach’s takeaway: “Art has a history of being non-correlated to the broad stock market. Which means the returns you can expect to get from art shouldn’t tie to the ups and downs in the stock market.

“And when you invest in a different asset class altogether — precious metals, real estate or even art — you’re taking portfolio diversification to a whole new level.”

The FinTech approach to art collection? “It’s a very modern way to invest in an asset class that has been around for many centuries.”

“FANG+ earnings have come in hot,” says analyst Greg Guenthner. “Amazon was the latest to report strong numbers last night, right on the heels of beats courtesy of FB, GOOG, and AAPL.”

“Even more important than Apple’s earnings…

“The dividend increase signals that the company is very healthy and that management expects to see earnings growth continue,” Zach says.

“Household income rose at a record pace of 21.1% in March as federal stimulus checks helped fuel an economic revival that is poised to endure with an easing pandemic,” The Wall Street Journal says.

Meanwhile, the core PCE — personal consumption expenditure — rose 0.5% in March, according to the Commerce Department. After stripping out volatile food and energy prices, the core rate rose 0.4%.

Strong March gains pushed headline inflation up 2.3% over the past year from 1.5% in February… and above the Fed’s target inflation rate of 2%.

More on the de-dollarization beat: “Vladimir Putin’s multiyear push to reduce Russia’s exposure to the dollar hit a major milestone as the share of exports sold in the U.S. currency fell below 50% for the first time,” Bloomberg reports.

“Most of the slump in dollar use came from Russia’s trade with China, more than three-quarters of which is now conducted in euros, according to central bank data published late Monday.

“Multiple rounds of sanctions and the constant threat of more to come have pushed Russia to find ways to isolate its economy from U.S. interference,” Bloomberg says.

““The central bank has also stripped back its holdings of Treasuries in its international reserves, loading up on gold and euros instead.”

And the beat goes on…

“More than a century ago, physicians noticed that cancer patients sometimes had tumors recede after an infection,” says our science and technology specialist Ray Blanco. “Sometimes even a generalized infection causing a high fever had an effect.

“It’s taken decades of intense research,” Ray continues, “but in the past few years, we’ve seen the first of these cancer therapies approved where the goal is to help the patient’s own body heal itself, rather than attack the cancer directly via toxic drugs or ionizing radiation.

“These new wonder therapies aren’t without drawbacks, however,” says Ray. “They can be incredibly expensive.

“FDA-approved cell-based immunotherapies require each batch to be made specifically to the patient, using the patient’s own cells. This requires not just a blood extraction to harvest the patient’s T cells but also extensive lab work to modify and expand the number of cells prior to re-infusing them back into the patient.

“Moreover, these therapies are generally reserved as a last line because they can be dangerous. Hyperactivated T cells ravaging a patient’s cancer sound good in theory, but in practice, they can lead to deadly cytokine release syndrome where the patient’s own immune response can be so strong it kills them.

“Fortunately, biotechnologists are working on newer, cheaper, safer immunotherapies,” Ray says. “As they make their way through development and get to market, they will help save thousands of lives and earn fortunes for their developers and investors.” 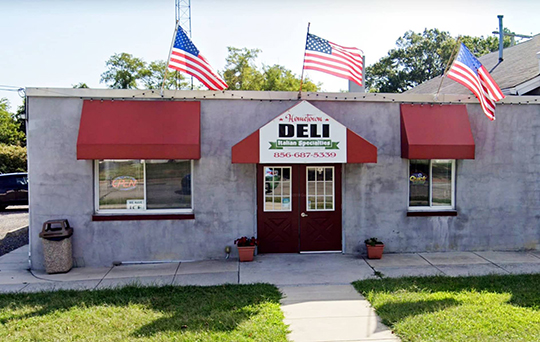 Leave the shares… take the hoagie.

But before we name names, first it’s important to unravel the mystery of HWIN.

“Hometown’s [$100-million valuation] was propelled not by amateur speculators but institutional investors,” Financial Times reports. “Among its key backers is a Hong Kong firm [Maso Capital], which sees its investment as a potentially lucrative variation on the special purpose acquisition companies…

“Yet setting up a SPAC can cost millions of dollars in administration fees alone, eating up a large portion of the value in such a small deal,” FT notes

“[Hometown] is a more flexible structure,” says Maso’s CIO Manoj Jain, “with a longer time to find a target, and a better economic uplift… It’s more like a mini-SPAC,” he says.

Now for the high-profile shareholders? “Duke and Vanderbilt universities, two of the most prestigious seats of learning in the U.S., are among [HWIN’s] biggest shareholders.”

We’ll stay with this story as it continues to unfold…

“As you astutely pointed out, deficits don’t matter… until they do,” a reader writes. “Blow a T-bill auction or two and suddenly all the collective economic ‘wisdom’ won’t be worth squat.

“Remember the geniuses in 1999 who said earnings per share for stocks didn’t matter anymore, that it was all about market share?

“I expect unbridled market exuberance — alongside unbridled indebtedness — to end about as spectacularly.”

“With the lessening of Republicans’ concern about debt and deficits, the right’s capitulation to the Democrats is complete,” says a friend of The 5.

“Now that Republicans have taken to debating social justice issues, one is left to ask, ‘If you Republicans are going to spend like Democrats, why not just elect Democrats?’

“(This is a rhetorical question for me, writing from the Democratic People’s Republic of Massachusetts. Massachusetts voters will elect a cow pie if it has a ‘D’ after its name. And they have.)

“As long as Republicans try to take up social issues — along with trying to ‘improve’ on Democrats’ fiscal plans — they are just going to continue to take part in Democrat debates, on Democrat terms and on Democrat turf.

“I don’t believe we need a third party in this country… I think we need a second party.”

“Deficits and fiscal responsibility have always been important to me,” another reader opines. “But too many baby boomers have forgotten how or why we should question authority!

“Personally, I don’t see eye to eye with many people, and I’m OK with that. I’m too right for the left and too left for the right.”

Stuck in the middle with you? Heh…

Enjoy the springtime weekend! We’ll be back Monday…