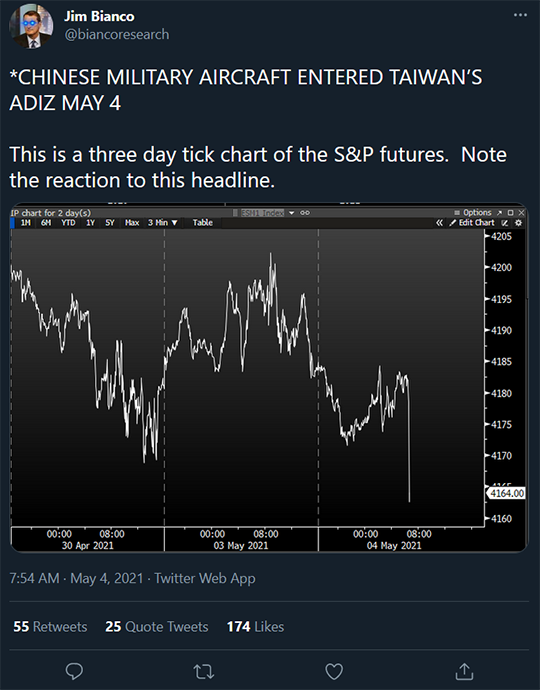 As you know, we’re suspicious of instant “explanations” for every blip in the stock market. We have mad respect for Jim Bianco, head of the institutional research firm that bears his name, but we’re not ready to sign on to his thesis. His Twitter mentions are filled with alternative “reasons” futures suddenly tanked this morning — including Fed policy and key “support” levels on the charts giving way.

Heck, there might be no reason at all. As we said yesterday, the market has entered a period of sideways chop despite killer earnings numbers from much of corporate America.

But for the sake of argument, let’s run with the Taiwan explanation. What happened this morning? Where are things going? How does it fit into our long-standing thesis of a new cold war between Washington and Beijing?

First off, the terminology: ADIZ is short for “air defense identification zone.” Every country has one surrounding its territory. Aircraft operating within an ADIZ have to follow certain rules — filing flight plans and such — or else run at least the hypothetical risk of getting shot down.

As you’re most likely aware, mainland China considers Taiwan a renegade province — unfinished business from the 1927–1949 Chinese Civil War. Thus, where one ADIZ ends and another begins is a matter of dispute.

U.S. military planners are preparing for the likelihood of Beijing reuniting with Taiwan by force — “in the next six years,” according to Adm. Phil Davidson, commander of U.S. forces in the Indo-Pacific.

Granted, Davidson is speaking out of self-interest. He said that to Congress in March while angling for a budget increase.

But he’s hardly alone in that assessment. It’s becoming conventional wisdom in Washington that the mainland could make its move anytime after the Winter Olympics in Beijing next February.

Since 1979, Washington’s position toward Taiwan has been one of “strategic ambiguity.” Officially, there’s only one government responsible for both the mainland and Taiwan, and that government’s capital is in Beijing. Unofficially, however, Washington sells Taiwan scads of weaponry — presumably to help fend off an attack by Beijing.

For its part, Taiwan has kept up the “one China” pretense, never declaring independence from the mainland. Should it take that step — and there are powerful factions on the island pushing for just that — Beijing would almost surely intervene to stop it.

Left unsaid in Washington is this question: “If China uses force to compel Taiwan to repudiate any right to independence, are we prepared to fight a war with a nuclear-armed China over the island’s political status and orientation?” asked the columnist Pat Buchanan in January.

And how would that war proceed? Not well for the United States, says retired Lt. Col. Daniel L. Davis from the Defense Priorities think tank.

“If we eventually choose war with China over Taiwan,” he writes at Business Insider, “we will at best suffer egregious losses in ships, aircraft and troops; in a worst case, the war could deteriorate into a nuclear exchange in which American cities are turned into nuclear wastelands, killing millions.

“America should never take such risks unless our security and freedom are directly threatened. Fighting China for any reason short of that would be a foolish gamble of the highest order.”

And it wouldn’t take an explicit war guarantee from Washington to Taipei for the new cold war to turn hot.

“Right now, both the United States and China are in a spiral in which one side expands its capabilities for war, citing rising threats from the other,” Davis writes — “which each then offers as justification for yet more military spending and preparation for war.

Of course, our “leaders” don’t level with us about these things. They only carp about how Beijing flouts the “rules-based international order,” to use Secretary of State Antony Blinken’s favorite expression.

Again, this isn’t a 2021 story. But when it becomes a 2022 or later story, expect global markets to be turned upside-down. Got gold?

Whatever the cause, that big drop in the futures has carried over into the day’s stock action.

But the economically sensitive commodities are on a tear — crude and copper both up more than 1%. A barrel of West Texas intermediate fetches $65.32, while a pound of the red metal is challenging its all-time highs at $4.53.

The price of corn topped $7 a bushel this morning for the first time since 2013. Chinese demand, dry weather in South America and Europe — it’s a perfect storm. 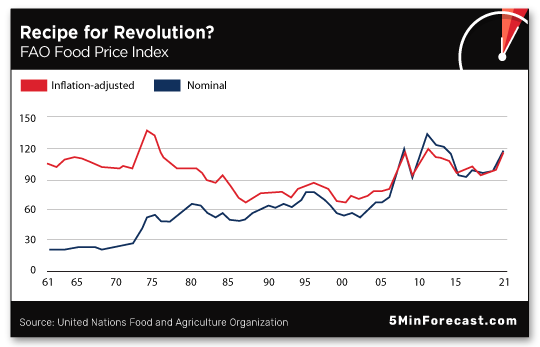 The inflation-adjusted number is approaching its 2011 peak — a time when skyrocketing food prices set off the “Arab Spring” revolts throughout the Middle East and North Africa. Just sayin’…

The green-energy boom is undeniably bullish for silver.

According to the Silver Institute’s annual World Silver Survey, the solar industry accounted for 101 million ounces of demand last year.

Solar demand for silver has doubled since 2014… even as the amount of silver required to produce a single cell in a solar panel has plunged 80% over the last decade.

How did the industry get so efficient? Here’s a technical description from the Indian green-energy website Mercom: “The drop in silver loading was caused by the metalization process, which shrunk the average width of the electrode, busbar and finger (both are electrical conductors to collect the direct current on the PV panel) from 100μm (micron) to 30μm.”

But efficiency notwithstanding, demand keeps rising. And looking ahead the next two years — wow. The amount of new solar capacity worldwide in 2020 totaled 4.5 gigawatts. The Silver Institute expects that figure to more than double to 10 gigawatts this year… and then quadruple to more than 40 gigawatts the year after.

The number of people collecting retirement benefits from Social Security totaled 46.4 million in March — up 900,000 year over year, the smallest increase since 2009. 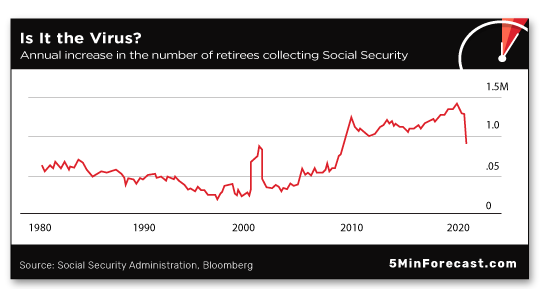 Social Security’s actuaries say it’s too soon to tell whether the virus is the reason… but Bloomberg points out that per CDC figures, about 447,000 people who died with the virus were 65 or older.

The actuaries also won’t say whether the 2020 numbers will push back the date when the Social Security trust fund might be depleted. Last fall, the Congressional Budget Office estimated that would happen in 2031 — after which only payroll taxes could fund the program, forcing a 25% benefit cut.

Of course, while the growth in the number of recipients is slowing… all those working-age folks who lost their jobs last year stopped paying into the system.

How will those factors offset? Too soon to say, but there’s another dynamic at work — one we’ve been tracking since 2014. We gave it the cheeky name “the awful way Social Security might be ‘saved.’”

Just a guess here, but we’d bet among the over-65 set… the better-educated higher earners probably have a better mortality rate amid the virus. And they’re still paying into the system…

Update: The 7-Eleven in Japan that was being built atop the parking lot of another 7-Eleven is now open. 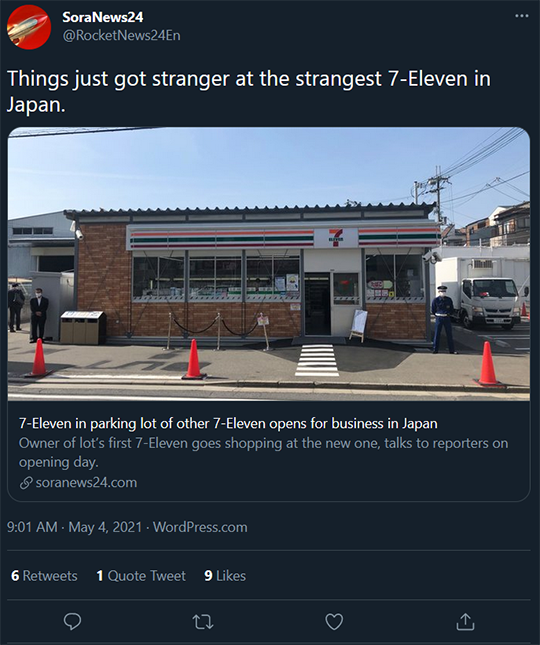 The story goes back to early last year, when 7-Eleven corporate yanked the franchise of Mitoshi Matsumoto, proprietor of a store in Osaka. That’s because he started closing during overnight hours, unable to find any help.

The twist to the story is that while Matsumoto owned his storefront, the parking-lot property was being rented from a third party by 7-Eleven corporate. So last month, corporate began building a new 7-Eleven right next to the old one. It opened today.

Per a report from SoraNews24, Matsumoto stopped into the new location for a cup of coffee — and immediately convened an impromptu press conference outside his own store, reminding reporters his lawsuit against 7-Eleven will go to court on the 28th of this month.

P.S. Congratulations to readers of The Profit Wire, who just played Pfizer to perfection.

On March 16, Alan Knuckman recommended Pfizer call options. At the time, the media were clinging to a negative narrative — that there was no way the company could reach its ambitious goals for distribution of its corona vaccine, especially in light of glitches at a key facility that produces the shot.

But with the help of a proprietary indicator, Alan knew connected insiders were making bullish bets on PFE. They knew good news was coming before the media did.

Sure enough, CEO Albert Bourla said on April 14 that patients would likely need a third dose of the vaccine after another six–12 months. More shots, more revenue. The next day, the first half of the trade delivered a 50% gain.

Today, PFE issued its first-quarter numbers — beating Wall Street’s expectations on both sales and profits. With that, the rest of the trade hit its 100% profit target. And all within seven weeks.

Yes, there’s more where that came from. We’ll be reopening The Profit Wire to new readers soon. Watch this space.