“Prepping” for a Post-Dollar World

Confession: Your editor half-assed it the other day. And readers of The 5 were quick to call me out.

It all began after our recent exploration of central bank digital currencies and their potential for pervasive surveillance — seeing as a CBDC is a variation on the cashless-society gambit. A reader inquired: “How would we use our precious metals as money and stay outside of the government system? Would we be forced to underground transactions for everyday purchases using our PMs like cash to maintain anonymity?”

The best I could come up with on the fly was that a CBDC can’t be imposed out of the blue; it would have to be done under cover of a financial crisis, one so huge that people would be frightened into going along. With that level of crisis not on the immediate horizon, there’s still time to accumulate the precious metals you need to feel secure.

“That was a weak answer,” a reader responded. “You should do an entire missive on what precious metal holders can look forward to if Fedcoin or digital dollars ever come along. I want to stay in gold because I feel that cryptos are tulips.”

“You really did not answer the question,” said another. “If you think you did, please try again, in very specific terms. Thank you.”

At least you didn’t say “Do better” like the wokesters do.

So here goes. I can’t promise it’s a better answer. But it’s a longer one. Heh…

First, a quick word about how such a crisis might come about.

You might recall a few weeks ago we mentioned how the dollar’s share of global currency reserves has fallen to 59% — the lowest in 25 years.

Bloomberg News addressed the phenomenon in a surprisingly head-on fashion — declaring the drop has occurred “amid questions about how long the dollar can maintain its status as the pre-eminent reserve currency.”

Chimes in our old friend and currency maven extraordinaire Chuck Butler, “And in my opinion, we will continue to see the percentage drop even lower, as the currency printing continues, thus debasing the value of the current stock of dollars.

“When the drop in reserves comes to a crescendo,” Chuck wrote this week in his Daily Pfennig e-letter, “we will probably wake up to find a digital currency had taken over our dollar balances at the bank.”

Just thought it was worth mentioning. We’ll continue to keep an eye on those figures. Now let’s tackle the question…

Here’s the thing: If you’re truly serious about carrying on daily commerce with precious metals outside the confines of a CBDC, you need to do a wholesale reordering of your life starting yesterday.

For one thing, forget about using most if not all e-commerce once a CBDC is in place. It’s not as if Amazon is going to accept precious metals or some digital proxy for precious metals as payment. No, it’s going to take the total-surveillance and severely depreciating CBDC. Ditto for nearly every other online retailer.

Too, it would be prudent to start stockpiling basic consumer goods. That’s probably a good idea even if you’re not concerned about a CBDC. If we’re indeed headed for a “supercycle” of consumer price inflation — whether it’s underway already or it doesn’t start in earnest till next year — it’s best to accumulate the stuff you know you’re going to use before the prices go up. (We’ll probably get into the nuts and bolts of that sometime soon.)

But that only goes so far. Again, if you’re really serious, you need to start having conversations with neighbors and local business owners — assuming they don’t look at you as if you’ve got two heads — about how you’d proceed with everyday transactions. For instance, Silver Eagles or junk silver? (Forget gold coins for small transactions — a 1/10th-ounce Gold Eagle is worth $183 based on today’s spot price, and the premium over spot is 40% or more. Not very useful at the farmers market.)

You’d also have to figure out which transactions you’d be still willing to conduct in the surveilled CBDC world… and which you’d insist on conducting in the underground economy.

See what you’re up against? Done right, you’d need to adopt a full-on, off-grid prepper approach to life — and actively seek out like-minded folk because you can’t do it all yourself.

Nothing wrong with that, of course. But it requires a greater level of commitment than most people are willing to exercise.

So that’s the best answer we can come up with. Your mileage will vary. And we’ll continue the conversation as time goes on. It’s a huge topic that will benefit more from crowdsourced wisdom than from any one know-it-all guru.

In the meantime, ponder this: There’s solid reason to believe the worst-case scenario won’t come about.

We say this because of what’s developed in just the last few weeks since we wrote about another vehicle for pervasive surveillance — the “vaccine passport.”

The Gallup pollsters recently found that “U.S. adults favor mandated vaccination certification for travel by airplane (57%) and to attend events with large crowds, such as concerts or sporting events (55%).”

But beyond that? Support for mandates diminishes quickly. Majorities oppose proof of vaccination in hotels and restaurants — and also in the workplace.

The powers that be almost certainly know better than to press their luck beyond air travel and mass events. So the nightmare scenario of a vaccine passport as an entry point to a Chinese-style “social credit score” appears overblown — and that’s despite the mass fright engendered by the pandemic.

We’ll take these developments as a hopeful sign that a central bank digital currency — unpleasant as it will surely be — won’t be the entry point to a turnkey totalitarian state. (Who says we’re all doom-and-gloom here?)

To the markets: “On the surface it looks like the Nasdaq is taking a hard hit this week,” says our floor-trading veteran Alan Knuckman.

But below the surface? “Tuesday’s ‘tech trouble’ started with the index opening lower, BUT stocks climbed back to unchanged levels before the session was done. This was on the back of the Nasdaq’s comeback climb Friday that shocked the short sellers and left tech a mere 3% from the April 29 tip-top a few short sessions ago.

“Earnings season has almost ended, and stellar numbers are being seen across the board as the average beat is 22% above estimates and the revenue growth rate is 10%. Don’t be swayed by yesterday’s inflationary news… the fundamental earnings facts look fantastic!”

So in the scheme of things, it’s all just sideways chop before the next leg up — a “correction in time” as opposed to a “correction in price.” For crying out loud, the S&P notched a record close last Friday and financial TV treats this week like it’s 2008 all over again.

Bitcoin is licking its wounds from the whooping the Elon Musk just administered.

Late yesterday, Musk said Tesla would no longer accept Bitcoin as payment for its cars — a reversal after only two months. “We are concerned,” Musk said, “about rapidly increasing use of fossil fuels for Bitcoin mining and transactions, especially coal, which has the worst emissions of any fuel.”

Uh-huh. Apparently we’re supposed to believe Musk woke up one morning a few days ago, checked his Facebook feed, stumbled across a random article and suddenly realized OMG, it takes a LOT of electricity to make Bitcoin! And a lot of Bitcoin mining takes place in CHINA! Where a lot of the electricity comes from COAL! I HAD NO IDEA!!

Anyway, Bitcoin promptly crashed from $54,700 to $46,600 in the space of 2 and a half hours. Then it recovered to $50,500 in the following two hours, and that’s more or less where it sits half a day later. Someone made a lot of money on all that volatility…

Among more conventional non-dollar assets, gold is recovering from yesterday’s smackdown — up $11 to $1,826. Silver has surpassed the $27 level, barely.

The economy is reaching a point where maybe we won’t be sharing the little chart of horrors on a weekly basis anymore. 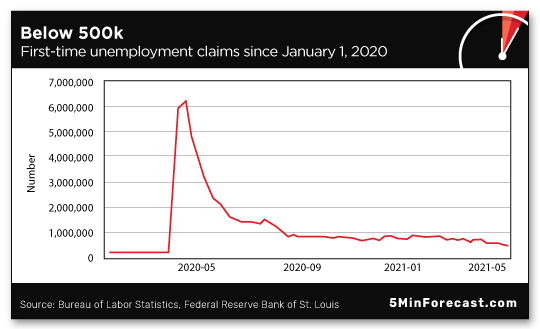 The average over the last four weeks is 534,000. That’s actually on par with a “typical” recession and not a lockdown-driven catastrophe. It’s comparable to the numbers coming out of the 2007–09 recession… and the worst of the recessions in 2001 and 1990–91.

The other big economic number of the day is wholesale prices. Like yesterday’s Consumer Price Index, it’s running even hotter than expected — up 0.6% month over month and 6.2% year over year.

Back to the mailbag, and a longtime reader with a different spin on the CBDC question…

“One risk to keep in mind is that your internet connections had better be bulletproof.

“Given that nearly everything we do already depends on a good connection, perhaps this is just one more step, but imagine an enemy figuring out how to take down our internet (or us taking out theirs), and thus shutting down all buying and selling.

“If that lasted more than a few hours…”

The 5: As we’ve chronicled in years gone by, undersea cables deliver almost all international internet traffic… and cutting one or more of them is a relatively simple endeavor. It’s a wonder it doesn’t happen more often than it does.

Also, now you’ve got us wondering whether a CBDC would be more dependent on electricity than the current system or less. And how that does or doesn’t fit in with the green agenda.

So much to ponder, so little time…