“The Man” Behind the Mask, Revisited

As of this morning, vaccinated Walmart employees can shed their masks on the job.

As you’re likely aware, vaccinated Walmart customers have been able to do likewise while shopping since Friday — after still more revisions to “the science” by the CDC. (Of course, stricter state and local limits might be in place where you are. Ugh, more about that later…)

Walmart shares are up 2.3% as we write this morning after WMT delivered an earnings “beat” and upped its outlook for the rest of 2021. CFO Brett Biggs anticipates “pent-up demand” as people come out of lockdown. He even mentioned rising sales of teeth whitener as customers remove their masks.

You can’t underestimate the impact of America’s biggest big-box retailer on how Americans have dealt with mask mandates.

WMT’s nationwide mask requirement didn’t kick in until July 20 last year. But once it did, it often carried more weight with everyday folks than government mask requirements — as the independent journalist Michael Tracey discovered while traveling the nation last summer… 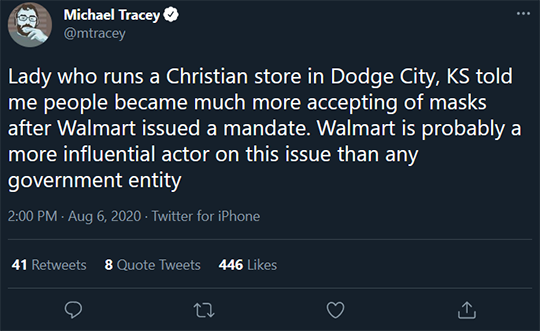 Of course, the new policy as of Friday instantly begged the question of how the unvaccinated hordes would be prevented from descending maskless upon Wally World and killing Grandma.

Then again, as Tracey found last year, even the old rules were sometimes enforced more in the breach than in the observance… 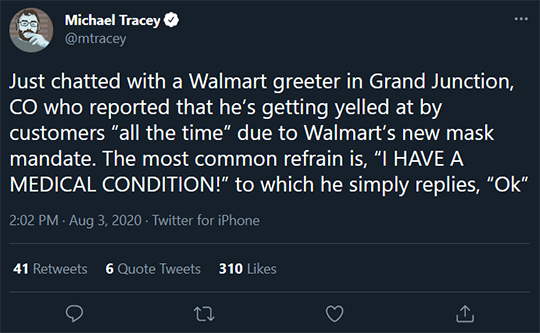 Which reminds us of one of the worst injustices — among many — imposed by the control freaks and power trippers in government these last 14 months: Enforcement of their mask mandates at retailers, restaurants and elsewhere often fell to low-paid help who never signed up for such miserable duty when they took the job. Hell of an “unfunded mandate.”

[Ed. note: If you’re getting the sense that this is one of those occasional single-topic episodes of The 5, you’re right. It’s that important.]

We can’t discuss how we got here — and where we’re going — without discussing where we’ve been.

On April 4, 2020, the Centers for Disease Control and Prevention performed one of the most epic flip-flops in Washington, D.C., history. “Everyone should wear a cloth face cover when they have to go out in public,” because “you could spread COVID-19 to others even if you do not feel sick.”

Up until then, the guidance was merely to “wear a face mask if you are sick.”

We knew the CDC’s U-turn was coming the day before it happened. We declared it a torches-and-pitchforks moment — because for the preceding two months, the messaging from both government and media was that either masks don’t work… 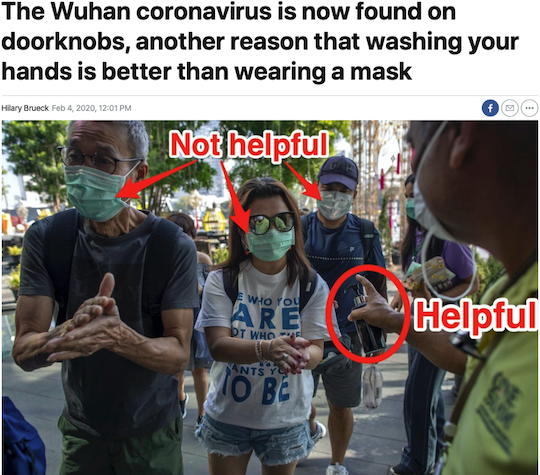 … or that they mysteriously work only for health professionals but not the rest of us. Remember that?

Yeah, yeah, we know: There was a mask shortage. The powers that be allegedly had the best of intentions.

And yet the sociologist Zeynep Tufecki warned in The New York Times of March 17, 2020 — more than two weeks before the CDC flip-flop — that the “noble lie” was bound to backfire.

“The message became counterproductive,” she wrote, “and may have encouraged even more hoarding because it seemed as though authorities were shaping the message around managing the scarcity rather than confronting the reality of the situation.”

Fast-forward to spring 2021… and the control freaks and power-trippers were coming *this* close to shredding whatever was left of their credibility.

And yet… for several more weeks, the most visible political and public health leaders continued to conduct themselves as if it were still April 2020 — masking up even when alone in small groups with only other vaccinated people.

One day, it was too much for a reporter who posed an impertinent question to the White House press secretary… 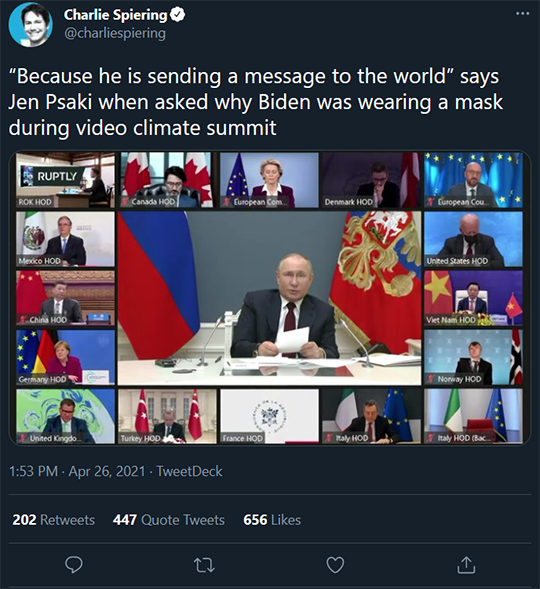 Whatever “message” the president intended to send the world, everyday Americans were starting to get a very different one: “Even if I get vaccinated, I can’t return to normal life, so what’s the point of getting vaccinated?”

On April 27, the CDC revised its guidelines again, declaring in plain English, “You can gather indoors with fully vaccinated people without wearing a mask or staying six feet apart.”

But otherwise, the government “messaging” was still full-on fear. On and on it went, confidence in the vaccines undermined further.

Nine days ago, Health and Human Services Secretary Xavier Becerra went on the Sunday talk-show circuit. CNN’s John Berman asked him why if everyone in an office is vaccinated, they still need to wear masks. Becerra hemmed and hawed, backed and filled, to’d and fro’d, until he finally spat out, “We want you to be as safe as possible.”

All hail “the science!”

Rather than citing her own agency’s written guidelines, which said, in fact, that Shep and colleagues could rip the masks off, she served up this word salad for the masses’ consumption: “We have to look at the science with regard to how the vaccine has worked in the real-world setting…

“And then we need to make sure that you’re not an asymptomatic carrier, if in fact you’re vaccinated. So all of that science is emerging, that’s what we’re following and we will use to update our guidance.”

The part about “Suck it, peasants” was merely implied.

The next day, Thursday, the CDC dropped the pretense: “Fully vaccinated people can resume activities without wearing a mask or physically distancing, except where required by federal, state, local, tribal or territorial laws, rules and regulations, including local business and workplace guidance.”

Walmart quickly took its cue from the CDC and so did Costco and Target — the only other big-box retailers that matter anymore.

But oh, those state and local restrictions: California’s mask mandate remains in effect until June 15… and a Trader Joe’s in Pasadena already got an earful from LA County’s health department for posting a sign giving vaccinated shoppers permission to enter maskless.

Meanwhile on the other coast… 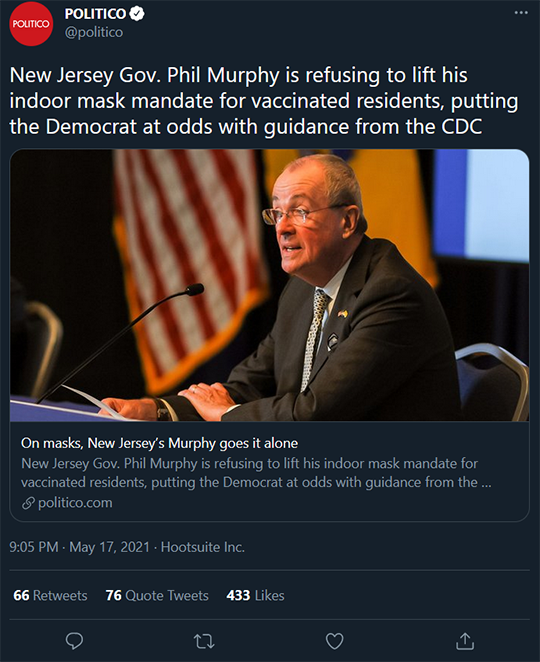 But… but… what happened to follow the science? More about that shortly.

Here in Michigan — where your editor resides and where Gov. Gretchen “Queen of Hearts” Whitmer issued some of the most arbitrary corona-edicts anywhere — it’s more or less the Walmart model now.

That’s a U-turn from only three weeks ago, when Michiganders became guinea pigs in a huge sociological experiment — the state relying on peer pressure to encourage vaccination.

The “reopening” of the state was tied to four vaccination milestones. The final milestone would be two weeks after 70% of the adult population got their first dose: At that point, all limits on “gatherings” and all orders to mask up would be lifted. Until then, everyone — vaccinated or no — was under orders to “wear masks while participating in gatherings,” said The Detroit News.

Whelp, the peer-pressure experiment is off: As of Friday, only 55.6% of Michigan adults had gotten their first dose, but now the fully vaccinated are exempt from the masking requirements.

Heck, even the unvaccinated can doff their masks as of July 1. But until then, how are businesses to know who’s vaccinated and who’s not? As with Walmart, it’s basically the honor system.

But as noted above, some die-hard blue-state politicos are clinging to their mask mandates, even if they further undermine the case for vaccines.

“The mask was supposed to be a temporary public health intervention, and it’s regrettable that for many people these little bands of cloth have become Team Blue’s version of the Make America Great Again hat,” writes Robby Soave at Reason. “If officials keep forcing this choice on others even past the point of vaccination, they can’t accurately cite the science in their defense.”

For those officials, it’s no longer about science (if it ever was) — it’s strictly politics, and playing to their base.

“Lurking among the jubilant Americans venturing back out to bars and planning their summer-wedding travel is a different group: liberals who aren’t quite ready to let go of pandemic restrictions,” writes Emma Green in The Atlantic.

“For this subset, diligence against COVID-19 remains an expression of political identity — even when that means overestimating the disease’s risks or setting limits far more strict than what public-health guidelines permit.” 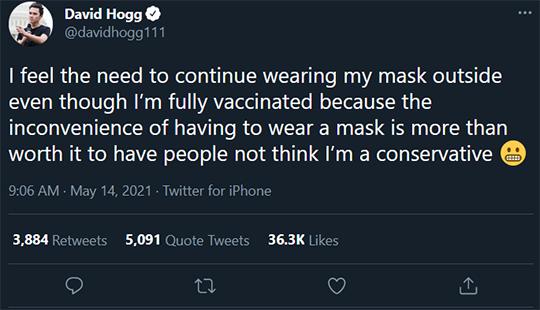 More from Green’s article: “When vaccinated adults refuse to see friends indoors, they’re working through the trauma of the past year, in which the brokenness of America’s medical system was so evident. When they keep their kids out of playgrounds and urge friends to stay distanced at small outdoor picnics, they are continuing the spirit of the past year, when civic duty has been expressed through lonely asceticism.

“For many people, this kind of behavior is a form of good citizenship. That’s a hard idea to give up.”

Meanwhile, the control freaks and power-trippers aren’t done with the rest of us. Between masks and lockdowns and everything else, they’ve already seen what they can accomplish with a pandemic.

“Sooner or later,” writes University of Texas scholar Michael Lind at the Tablet website, “there will be another crisis, and the dominant culture of technocratic progressivism and its adherents will insist it can only be addressed by expert-led, top-down, centralized government allocation of resources or jobs.

“Once again, whatever the new problem happens to be, we will be told that it is an emergency, that democratically elected officials must defer to the policy views of unelected academics or career civil servants and that disagreement and debate threaten the survival of America and the personal safety of us all.”

Exactly. And next time, there’s no guarantee the stock market will roar 93% higher in the 14 months after the emergency’s onset. Just sayin’…

P.S. The markets today, you ask? A mixed bag — The Nasdaq up a half percent, the S&P 500 flat, the Dow down less than a quarter percent.

The big economic number of the day is housing starts — falling 9.5% from March to April, way more than expected. And the number of permits is also a disappointment. The rising prices and dwindling supplies of building materials? It’s starting to bite.

Back to regular programming tomorrow…