The “economic policeman of the planet” is going easy on Germany with the billy club.

Washington has decided to stop standing in the way of the Nord Stream 2 pipeline — the nearly completed project that would pump Russian natural gas under the Baltic Sea into Germany.

“The decision indicates the Biden administration is not willing to compromise its relationship with Germany over this pipeline, and it underscores the difficulties President Biden faces in matching actions to rhetoric on a tougher approach to Russia…

“Sources close to the situation say that top Biden officials have determined that the only way to potentially stop the project — which is 95% complete — is to sanction the German end users of the gas.” And that’s a bridge too far for Team Biden.

While the political irony is thick… 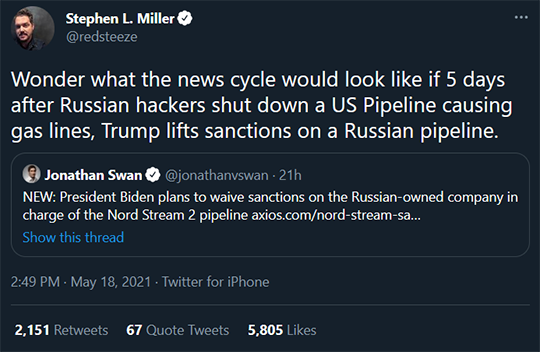 …it’s the economic impact we care about more. We daresay that pressing ahead with the sanctions would have jeopardized the dollar’s status as the globe’s reserve currency.

Once more we invoke the words of France’s Finance Minister Bruno Le Maire three years ago: “The international reach of U.S. sanctions makes the U.S. the economic policeman of the planet, and that is not acceptable.” That was days after the Trump administration withdrew from the Iran nuclear deal and slapped new sanctions on Tehran that affected European companies.

Team Trump had no qualms about using the truncheon to get its way on Nord Stream 2. Its stated motivations were several…

Coming into power, Team Biden promised to carry on the policy — the better to stick it to Vladimir Putin. “I am determined to do whatever we can to prevent that completion” of Nord Stream 2, said Secretary of State Antony Blinken during his confirmation hearing.

But alienating Germany, the most powerful nation-state in Europe, isn’t worth the price. Not when the dollar’s supremacy could be at stake. (Axios didn’t dare touch on this angle of the story — too hot for the mainstream to handle.)

As we’ve mentioned a couple of times in recent weeks, the dollar’s share of global currency reserves has fallen to 59%. It hasn’t been that low since 1996.

The world was far different in 1996. Russia was a basket case, two years away from defaulting on its debt. Germany was still figuring out how to function as one country after reunification. The euro didn’t yet exist as a potential dollar alternative. China’s rise was barely underway. Washington was the sole superpower in every conceivable realm — the 59% figure was no big deal.

But by 2014, we took note as Russian and Chinese leaders were conferring about how to pursue “de-dollarization.” By 2018, our team was contemplating a Russian-Chinese-Iranian-Turkish network of international payments, bypassing the dollar.

By 2019, European leaders were looking to build their own payments network so European firms could bypass U.S. sanctions on Iran (which remain in effect).

Now? Bloomberg News suggests the current drop in the dollar’s share of global currency reserves is occurring “amid questions about how long the dollar can maintain its status as the pre-eminent reserve currency.”

No, the dollar won’t be dethroned tomorrow. It’s a process, not an event.

As our Jim Rickards would remind you, it took 30 years and two world wars for the British pound to lose its reserve-currency status.

The final blow was the Bretton Woods Accord of 1944. The slow-motion handoff from the pound to the dollar was complete. Within three years, Britain gave up most of its overseas empire (good) and took a hard left turn down the road of socialism (bad).

This time, there’s no obvious successor to the dollar. The outcome could be a lot messier.

We’ll stay on top of the process and guide you through whatever it brings so you can preserve and grow your wealth.

To the markets, which the mainstream says are tanking because of… [spins the wheel]… turmoil in cryptocurrencies.

Well… only 48 hours ago, Bitcoin was still a hair below $50,000. At last check, it was less than $39,000. Ethereum sits near $2,800 after touching the crazy heights of $4,000 barely a week ago. Elon Musk is being his usual mercurial self about cryptos, while the Chinese authorities ordered financial institutions and payment companies to stay the heck away from cryptos. Oh, and Coinbase was down for a while this morning, at least for some users.

But gold has tacked on another $10 as we write, the bid now $1,879. Silver’s down about a quarter to $27.88. Crude and copper are both down more than 3%, but there’s nothing to suggest a sudden economic downturn.

Maybe we should report the stock indexes a little differently, in a way to offer perspective the usual suspects won’t. Take a deep breath…

And yet it feels as if CNBC is on the verge of trotting out its MARKETS IN TURMOIL animation and banners.

But as our floor-trading veteran Alan Knuckman would remind you, financial TV’s objective is to keep you glued to the screen for the sake of advertisers — not help you make money.

Speaking of overreactions, there’s the sell-off in Home Depot.

On Monday, Home Depot shares closed at $320.01. Then HD reported its quarterly numbers — which were gangbusters. Shares sold off yesterday and the sell-off continues today. Checking our screens it’s down to $312.62.

It’s a classic “buy the rumor, sell the news” move according to our Zach Scheidt.

“In the two months leading up to the company’s earnings report,” he tells us, “shares rose by as much as 36%. That’s a huge run for such a reliable blue chip company. “For HD, this buying pressure pushed the stock steadily higher throughout much of March and April. But as we got closer to the report, it became more tempting for some investors to pull profits off the table.

“‘Buy the rumor, sell the news’ is an age-old pattern because it’s based on human nature. And in the stock market, this often results in a temporary pullback for some of the strongest names.”

As far as Zach’s concerned, it’s a buying opportunity whenever the proverbial weak hands are shaken out. “As long as a company is still healthy, profits are still growing and the outlook is still encouraging, consider using the pullback as an opportunity to buy more.

“Over time, this is a great way to build larger holdings of great names that pay lucrative dividends.”

Elsewhere on the housing scene… we see prices of building materials are rising so quickly, builders are resorting to escalation clauses.

As we mentioned briefly while signing off yesterday, tight supplies and rising prices of building materials are putting a hurt on the pace of new construction.

It turns out 47% of builders surveyed by the National Association of Home Builders are now writing escalation clauses into their contracts.

“Escalation clauses,” explains the NAHB, “specify that if building materials increase, by a certain percentage for example, the customer would be responsible for paying the higher cost.

“Including such a clause allows all parties to be on notice that the contract costs could change if materials prices change due to supply constraints outside the builder’s control.”

As we mentioned earlier this month, the NAHB says the price of lumber alone has added $36,000 to the price of a new home since April 2020.

Between lockdowns fouling up supply chains… and beaucoup money printing by the Federal Reserve… it’s a perfect storm.

To the mailbag, and a reaction to our mask rant yesterday…

“Dave, the comment about the technocrats and (my add-on) totalitarians waiting for the next crisis to justify the latest version of essentially their ‘five-year plan’ stirred up this thought…

“Hyperinflation (of course created by them) will necessitate commensurate responses from the incompetent state to strangle the productive class even more.

“Crazy thinking… up until four months ago.”

The 5: Hear, hear… but why do you think four months ago was the starting point?

Although now that you mention it, the inflation rate — no matter how you measure it — had been in a tight range for the last several months of 2020. It started taking off meaningfully after January.

By the way, Jim Rickards is sticking to his thesis that accelerating inflation will be a 2022 story — not 2021’s. Once we move into summer, he says the year-over-year comparisons will start looking more tame; it’s those “base effects” we mention now and then.

“Inflation will come down sharply and the 10-year note yield will come down with it,” he says. “Gold will rally and stocks will breathe a sigh of relief… In the short run, inflation fears are a false alarm.”

P.S. Another argument for inflation easing later this year — an interesting survey from Great Britain.

Researchers reached out to more than 3,000 people and found 74% saying they want to save more than they did pre-pandemic. And they’re not necessarily keen to blow the funds they saved up during lockdown, either.

“The public are not yet ready for a Roaring ’20s moment,” concludes Ben Page of Ipsos MORI, which conducted the survey. “Prudence on saving and spending prevails and hedonist tendencies are at a 20-year low.”

Inflation is both a monetary and a psychological phenomenon. It can’t take off in a sustained way without “velocity” — that is, people who are eager to part with their money because they anticipate prices will go up.

If the survey is correct and if U.S. consumers are like-minded, the inflationary monster may indeed be “transitory,” just as Federal Reserve pooh-bahs say.

Strange that we’d suggest the Fed might be onto something for once, but there we are.