If you find yourself glued to the day-to-day action in the price of gold, you might be taking a deep, cleansing breath right now…

Even as the price of Bitcoin ricocheted, gold closed the week on Friday at $1,874.11 per ounce. And the price of gold is inching higher at the time of writing, up above $1,900. The yellow metal, in fact, is edging ever closer to the over-$2,000 record highs last summer.

(Of course, if you’re a veteran reader of The 5, you know we’re talking about the “paper price” of gold futures. The physical metal you can hold in your hand comes at a premium.)

We’ve reminded readers from time to time what our macro expert Jim Rickards advises: “I recommend having at least 10% of your portfolio in physical gold and silver,” he says. “And with threats of inflation and a devalued U.S. dollar, it’s more important than ever to preserve your wealth.”

To wit, Jim notes one country is a standout when it comes to protecting wealth with gold. “Investors can learn valuable lessons by following Russia’s lead in acquiring gold…

“No one knows more about gold than the Central Bank of Russia,” says Jim.

“The CBR led by Elvira Nabiullina substantially reduced Russia’s holdings of U.S. Treasuries while at the same time increasing the CBR’s allocations of gold, euros and Chinese yuan.

“What’s striking about these figures is that the gold allocation exceeds the value of U.S. dollars, and the Chinese yuan allocation is quite large compared with the yuan’s role in global reserves and payments.

“The large gold allocation is another deliberate policy,” Jim says. “Measured by weight, Russia has increased its gold reserves from 600 metric tonnes in 2009 to 2,299 metric tonnes today — more than a 280% increase off the base

“Today, Russia has the fifth-largest gold reserves of any holder in the world,” Jim notes. “The current value… is around $125 billion. 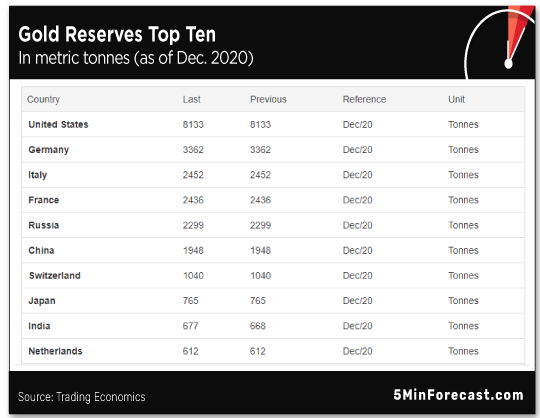 So Jim draws this conclusion: “If gold is true money supporting a debt- and credit-based economy, then Russia is the world’s leading gold power…

“Why Russia’s shift away from the U.S. dollar toward gold?” Jim asks. The reasons are twofold: “economic warfare and the prospect of U.S. dollar inflation.

“Since Russia is unlikely to win a head-on financial war with the U.S… it has undertaken both offensive and defensive steps to limit financial damage and attain degrees of freedom in international financial transactions.

“Increasing the yuan and decreasing the dollar component [of the CBR’s] reserves is an obvious way to reduce vulnerability to U.S. dollar-based sanctions,” Jim says.

“Gold is another way to… avoid the impact of U.S. dollar sanctions,” he says. “Gold is a non-digital asset that cannot be frozen in banks or interdicted through dollar payment channels.

“[Plus] gold is easily moved, typically by air, if it needs to be delivered to counterparties such as China, Iran, Turkey or North Korea without detection by the U.S.

“Gold has another attribute even more valuable than its non-digital form,” Jim says. “It’s the ideal hedge against inflation.

“Even though Russia has reduced the dollar component of its reserves to 22%, that is still a substantial allocation worth about $120 billion. If the U.S. maintains the purchasing power of the dollar,” he says, “Russia will be content with the 22% allocation.

“But if the U.S. resorts to inflation as a way to deal with its $30 trillion debt burden (over 130% of U.S. GDP and rising), Russia is vulnerable to the loss of purchasing power in those dollar reserves.

“Russia has two powerful antidotes to this inflation scenario,” Jim says. “The first is the price of energy — Russia’s principal export — which will rise in real terms as inflation takes off. Russia’s revenues will keep pace with inflation through higher dollar prices for energy.

“The second is the price of gold, which will also rise sharply with inflation.

“The construction of the Russian gold hedge is a work of financial engineering genius,” Jim says.

“If inflation takes off, Russia’s percentage allocation to gold will increase automatically when measured in dollars without buying a single additional ounce of gold,” he says. “The [CBR’s] gold balances could increase from 23% of reserves to 40% or higher… simply by revaluing the existing stock of gold.

“You can use the same strategy,” concludes Jim. “Buy physical gold now at an attractive entry point. Then just sit back, enjoy the show and win like a Russian.”

[Ed. note: Our colleague Jim Rickards just revealed some critical information happening in the gold sector that you should be aware of.

He’s given permission to share this information with you, but keep in mind, his message will be taken offline TONIGHT at midnight because of the stir it might cause.

And you’ll fully understand why once you witness the rare occurrence happening in gold that Jim’s reporting.]

“The market is trying to get its mojo back,” says our analyst Greg Guenthner. “The averages are slightly higher with the Nasdaq leading.”

And it’s worth mentioning: “We are seeing some speculators return to the well,” says Greg. “Meme stocks are moving today” — in particular, AMC and GameStop — “as well as some of the speculative names that were hot… in January and early February.”

“But based on past attacks, it’s very likely that an account at the organization was hijacked for the purpose of enabling control of Colonial’s network and resources.

“It could well be that someone at the organization was fooled into granting access to the hacker group [or] that a non-human account was compromised,” he says.

Also unknown? “Whether the cyberattack was at the behest of the Russian government,” says Ray. “But… the hacker group called DarkSide doesn’t go after systems with languages like Russian or nations close to Russia.” Hmm…

Ray continues: “Cyberattacks are the perfect gray zone for warfare these days. A cyberspace attack presents an element of deniability that prevents a counterattack of the sort that might happen in a real-world scenario

“The situation reminds me… of the Age of Sail,” says Ray. “When two countries were at war, they might have commissioned private vessels to attack their enemy’s shipping. During peacetime, these same crews might have turned to piracy instead.

“Commercial shipping had to be prepared in the event of a privateer ambush,” he notes. “Vessels of that era were usually set up with defenses to repel attack.”

Likewise: “Our commercial enterprises today must strengthen their own defenses against [new] digital militias, especially if they handle critical infrastructure needs or have sensitive private data on their networks.

“Was DarkSide’s attack an act of piracy in the cyber realm?” Ray asks. “Or was it the equivalent of privateering instead?” Hmm…

“One thing is certain: Such a high-profile cyberattack will spur further investment in cybersecurity in the U.S.” Ray says. “You can bet that IT departments across the country are preparing for the next cyberattack.”

[Call it kismet: The Colonial Pipeline cyberattack made news scant hours after Ray published his latest issue of Technology Profits Confidential… where he recommended a cybersecurity company. How’s that for impeccable timing?]

Not so fast! Conservatives are agitating against Biden’s IRS goon squad.

On Friday, The 5 reported the Treasury Department’s proposal to expand the IRS’ budget by 40% and to more than double its workforce to about 161,000.

Now Politico reports: “Conservative groups have launched a campaign of TV ads, social media messages and emails to supporters criticizing the proposal to hire nearly 87,000 new IRS workers over the next decade to collect money from tax cheats.

“Some Republicans, who have long worked to shrink the IRS,” Politico says, “hope opposition to the IRS proposal — which the administration says will raise $700 billion over a decade — could help defeat Biden’s costly spending plans altogether.”

In other words, Team Biden’s wishful thinking about elusive bipartisan support is melting away.

“As we polled multiple districts on multiple different messages the one that polled best for us was the notion of opposition to $80 billion in hiring more tax collectors,” says Marc Short, founder of the Coalition to Protect American Workers. “So that’s why I say I still think this is an Achilles’ heel for the overall plan.”

But… but… Americans should embrace more men (and women) in black!

Well, that’s according to former Pennsylvania Gov. Ed Rendell of coalition group Building America’s Future, who says: “[IRS agents] are only coming after those who are in the top 2% of wage earners in the country and large businesses that don’t pay their taxes.

“So the average American family… has nothing to fear from these additional IRS agents,” says Rendell.

The Reopening of America: Sourdough starters and toilet paper? So last year. Health and beauty supplies are booming as Americans get back to, well, grooming.

And it’s not just “self-care” products that are flying off store shelves. Necessities for travel and the like are getting snapped up: Walmart reports alarm clock sales doubled in April. Luggage sales? Quadrupled.

“As in-person interactions become a thing,” Fortune says, “we’re cleaning up for each other… The good news is there aren’t shortages of these products, like the ones we faced last year.”

Heh… I wasn’t aware we got a pass last year on, like, wearing deodorant? Perhaps I’ll continue “social distancing” in the meantime…

P.S. This might be Jim Rickards’ most critical message in years: Something is going on right now in the gold market, something he’s been writing about for almost a decade.

And it’s the perfect time for you to take advantage of this rare occurrence… but the golden window of opportunity won’t be around forever.

So don’t buy one ounce of gold until you see for yourself.