Before COVID-19 came along, the leading causes of death among older Americans were heart disease, cancer and Alzheimer’s.

For our purposes today, we’ll skip over the arguments about whether people have been dying “from” COVID or “with” COVID.

In fact, that controversy underscores the point we want to make — COVID has stolen the thunder from those other causes of death. It’s drawn research dollars and manpower away from heart disease, cancer and Alzheimer’s.

Maybe worse, the lockdowns halted many clinical trials of treatments for those Big Three killers.

As everything was shutting down in March of last year, Yale lung cancer researcher Roy Herbst told the journal Nature that activity had been cut to “almost zero… I feel bad because there are patients who might have benefited from those trials.”

But while the virus scrambled much research into the most common killers of older adults… one group of scientists continued quietly working toward an Alzheimer’s breakthrough.

And not a moment too soon: As the baby boomers age, the CDC projects the number of Americans with Alzheimer’s will explode from 5.8 million now to 13.9 million by 2060.

A potential Alzheimer’s treatment has been on the radar of our science-and-wealth maven Ray Blanco for a decade now.

For much of that time, researchers labored under the hypothesis that “amyloid plaque” starts accumulating in the brains of Alzheimer’s victims years before any symptoms appear — not unlike the plaque that can gunk up your arteries over time if you’re not careful.

Big Pharma spent years developing treatments based on that hypothesis — climaxing in utter failure during early 2019. Roche and Biogen both called an end to separate years-long trials after it became obvious they wouldn’t work.

By one estimate, as many as 300 experimental Alzheimer’s treatments have failed to show clinical benefits.

The bulk of those treatments tried attacking amyloid plaque. A handful of biotech upstarts tried other approaches, but they didn’t get far.

Finally here in 2021, it’s becoming evident: The key to a successful Alzheimer’s treatment is not the plaque itself… but rather another substance in the body that Ray calls “plaque magnets.”

As the name suggests, it’s the stuff that attracts plaque and allows it to build up. People with Alzheimer’s have higher levels of these plaque magnets.

Indeed, the presence of plaque magnets makes it possible for plaque to develop 20 times faster than in people whose bodies are free of them.

Researchers from a host of distinguished medical schools — Harvard, Columbia, Cornell and USC among others — have made a simple but profound discovery. “Simply by lowering the levels of these plaque magnets,” says Ray, “It seems to block almost all of the deadly plaque from attaching to the cells in the brain.”

Still, isn’t that a phenomenal breakthrough on its own? Imagine the millions of lives that could be changed for the better.

And yes, it’s investable. Long story short — Ray explains much more right here — this exhaustive university research has led to a patent. And that patent belongs to an up-and-coming biotech player whose shares trade for $10 each.

For reasons you’ll see when you follow this link, Ray believes an announcement is coming this Monday, Memorial Day, that could soon send the shares on their way toward $50 or $100 or even $120 over the next 12 months.

Obviously, the earlier you act, the bigger your potential gains. Click here and learn how you could get in on the ground floor of what might be the medical breakthrough of the decade.

The major U.S. stock indexes are inching closer to reclaiming their record highs. At last check…

All in all, healthy action. Zeroing in on the biggest Nasdaq stocks, our floor-trading veteran Alan Knuckman is especially impressed: “The NDX tech top 100 has bounced above its 13,500 midpoint pivot, setting up for another snapback attack to test the highs of not even a month ago.”

Word. Look at that bounce off the 13,000 mark Alan brought to our attention a week ago… 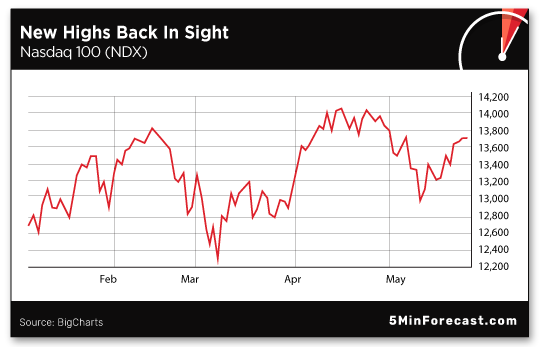 “The desire to buy the dips shows confidence, and all that’s left to do is wait for smart money signals to know the time to strike.”

Among the “economically sensitive” commodities, copper is staging a strong comeback — below $4.50 a pound on Monday, back to $4.63 today. Crude is up a bit and testing its year-to-date highs at $66.62.

The big economic number of the day is durable goods orders. The headline number missed expectations badly, slipping 1.3% in April. But if you strip out the always-volatile orders for aircraft and military hardware, “core capital goods” delivered a big upside surprise, leaping 2.3%.

Elsewhere, first-time unemployment claims for the week ended last Saturday totaled 406,000. The number’s been falling for four straight weeks and it’s another low for the pandemic era. We won’t retire the little chart of horrors just yet… but it’s not worth showing on a weekly basis anymore.

That’s according to “documents obtained by The New York Times” — the formal proposal comes tomorrow — but we have no reason to disbelieve it. The Gray Lady says if passed, it “would take the United States to its highest sustained levels of federal spending since World War II, while running deficits above $1.3 trillion throughout the next decade.”

Granted, presidents’ springtime budget proposals experience many, many changes by the time they go through Congress and are enacted into law. So it’s not worth spending much more of our digital ink on the matter right now.

But a bit of perspective here: As we write this morning the national debt totals $28.2 trillion. It roughly doubled to $10 trillion during Bush’s two terms and doubled again to $20 trillion during Obama’s two terms. The Trump-Biden duo will likely bring it to $40 trillion by Inauguration Day 2025. Clockwork.

From the “who knew” department: Iran is banning cryptocurrency mining for the next four months.

Apparently some 4.5% of all Bitcoin mining takes place in Iran — perhaps as a workaround against U.S. sanctions and other economic-warfare measures.

Alas, the required computer power is such a drain on the country’s electric grid that when drought recently squeezed the country’s hydropower capacity, it caused blackouts in Tehran and other major cities.

Thus, the ban: Government-licensed miners had already cut back voluntarily, but unauthorized miners were still doing their thing.

“Does price gouging count as inflation?” a reader writes.

“My good friend is the meat department manager at a large local supermarket. He told me just last weekend that beef prices he has to pay to stock the shelves increase 50 cents a pound across the board for no good reason. My mother received 15 cents per pound less for the last load of feeder cattle she sold two weeks ago.

“There is a lot of price-gouging corruption going on and inflation is getting blamed and it smells like BS.”

We know you’re right about the disconnect between low timber prices and high lumber prices. As we understand it, the sawmills are running flat-out and can’t keep up with demand. And they’re not in a hurry to build new capacity because they don’t expect the current sky-high lumber prices to last forever.

We’re not as plugged into the meat situation, but we know the meatpacking industry was severely disrupted at the outset of the pandemic. Perhaps the supply chain is still scrambled, as it is in so many industries, still.

Careful with the term “price gouging,” which people usually invoke before declaring the government ought to “do something.” Prices are information. Higher prices mean supplies are tight; the price conveys information that encourages people to dial back their consumption until the supply squeeze eases.

That’s the lesson of the 1973 oil shock: Those infamous gas lines weren’t the result of restricted supply, but rather President Nixon’s price controls in response to complaints about “price gouging.”

Better to have something available at a high price than nothing at any price.

“We can all speculate what war with China might be like,” writes one of our longtimers after we entertained the possibility earlier this week.

“Aside from a human disaster the important matter is that you need to understand what happens after the war when one or both sides capitulate. Who is going to rule who?

“That is where the real disaster will happen, as the victor will be faced with a guerrilla force of 300 million-plus or a guerrilla force of 1.4 billion people. And don’t count on allies (Russia, Europe) and don’t fool yourself that troops would be welcomed with roses or lotus buds.

“Neither nation will tolerate being ruled by another. The actual war will be like a small mole on the body that then becomes a hideous cancer… and the mole will be on the victor.

It’s everything short of conquest and occupation that’s cause for concern.

Coincidentally or not, the mainstream flip-flop on the “lab leak” hypothesis comes the same week that the head of Indo-Pacific affairs on Biden’s National Security Council says, “The period that was broadly described as engagement has come to an end” and “the dominant paradigm is going to be competition.”

P.S. Our tech and biotech whiz Ray Blanco has just completed a call with the CEO of the small biotech firm we mentioned earlier — the one that’s on the verge of a breakthrough in Alzheimer’s treatment.

Ray says this firm could be the most mispriced stock on the market right now… but that could all change after an announcement anticipated for this coming Monday. Follow this link to learn how you can get immediate access to Ray’s exclusive call.