“War is not imminent, but it is an ever-present danger, with the potential to produce a nuclear exchange between China and the United States,” said the veteran U.S. diplomat Chas Freeman in 2019.

Freeman ought to know. In 1972, just shy of his 29th birthday, Freeman served as the main interpreter for President Nixon during Nixon’s groundbreaking trip to mainland China. He’s been a keen observer of — and at times a participant in — U.S.-China relations ever since.

Here in 2021, the danger of war still isn’t “imminent.” But it’s a lot closer than it was in 2019 when Freeman made that remark — and when The 5 went on record that Donald Trump’s trade war had morphed into a new cold war with the potential to drag on for 30 years.

In applying fingers to keyboard this morning, your editor risks the accusation of “amplifying Chinese propaganda.” I might even be smeared as a “panda hugger.”

With that in mind, here’s an obligatory disclaimer — much like the one I invoked in 2016 when the Russia-Russia-Russia hysteria was getting amped up and I was accused of being a Russophile.

I am not a Sinophile. Nor am I of Chinese descent. Neither is my wife. I have never visited China. I have no Chinese investments other than perhaps a tiny Chinese presence within a gold-miner mutual fund.

But in the interest of full disclosure… I have an immense aversion to being vaporized in a nuclear war.

No, Beijing’s nuclear arsenal isn’t nearly as big as Washington’s or Moscow’s. But all of them are on hair triggers. Thus, peaceable relations among these three global powers are the paramount issue; the markets and the economy become rather secondary matters if the Earth is pockmarked with smoldering radioactive craters.

So with that out of the way…

In recent weeks, we’ve noticed a shifting narrative in the mainstream: It is no longer heretical or tinfoil or racist to suggest the COVID-19 virus might have escaped from a laboratory in Wuhan, China.

The shift began when former New York Times science reporter Nicholas Wade self-published an article on Medium: “It’s documented that researchers at the Wuhan Institute of Virology were doing gain-of-function experiments designed to make coronaviruses infect human cells and humanized mice. This is exactly the kind of experiment from which a SARS2-like virus could have emerged. The researchers were not vaccinated against the viruses under study, and they were working in the minimal safety conditions of a BSL2 laboratory…

“Readers will form their own opinion. But it seems to me that proponents of lab escape can explain all the available facts about SARS2 considerably more easily than can those who favor natural emergence.”

Wade’s piece was picked up by the Bulletin of the Atomic Scientists on May 5.

Less than three weeks later, the U.S. deep state has pushed the lab thesis onto the front page of this morning’s Wall Street Journal.

“Three researchers from China’s Wuhan Institute of Virology became sick enough in November 2019 that they sought hospital care, according to a previously undisclosed U.S. intelligence report that could add weight to growing calls for a fuller probe of whether the COVID-19 virus may have escaped from the laboratory.”

We’re immediately suspicious because the first name on the article’s byline is that of Michael Gordon.

Nearly two decades ago, writing for The New York Times, Gordon retailed some of the Bush administration’s most egregious lies during the run-up to the Iraq War — the ones about Saddam Hussein’s “weapons of mass destruction” and “ties to al-Qaida.” Somehow, Gordon’s reputation remained intact while Judith Miller, his colleague on many of the worst stories, was drummed out of the Times in 2005.

Understand, we’re agnostic on the question of the virus’ origin — “zoonotic” versus lab-created.

A pandemic of similar or worse scale could have easily been started at Fort Detrick, Maryland, or another U.S. biodefense/biowarfare lab.

In 2014, USA Today got its hands on government documents revealing more than 1,100 lab accidents reported to federal regulators between 2008–2012 that posed “significant or bioterror risks to people and agriculture.”

The same paper reported in 2016: “Government regulators have no idea how often laboratories working with some of the world’s most dangerous viruses and bacteria are failing to fully kill vials of specimens before sending them to other researchers who lack critical gear to protect them against infection, according to a new report by the Government Accountability Office.”

In July 2019, the feds temporarily shut down research into Ebola and other pathogens at Fort Detrick’s highest-security labs because there weren’t “sufficient systems in place to decontaminate wastewater.” That was the most information the CDC was willing to reveal — on account of “national security reasons,” natch.

Meanwhile, Beijing asserts COVID-19 got its start at Fort Detrick — with no supporting evidence.

Rather than sniping at each other, wouldn’t it be better if Washington and Beijing sought to adopt “a comprehensive approach to ensure a bioweapons arms race doesn’t continue to threaten humanity?” — as the independent journalist Sam Husseini wrote during the early stages of the pandemic. (Hat tip to Mr. Husseini for digging up the aforementioned “near misses” in U.S. labs.)

No, we have no idea what that would look like. That’s what diplomats are for, right?

Even if you take the lab thesis out of the equation, the New Cold War is gathering a self-reinforcing momentum.

“Indo-Pacific commander Adm. Phil Davidson’s warning of China’s ‘pernicious’ and ‘malign’ influence, an Atlantic Council report that lengthily describes how ‘China presents a serious problem for the whole of the democratic world,’ Sen. Jim Inhofe’s belief that ‘we’re in the most dangerous time of our lifetime’ — these are only the tamest examples of such rhetoric on China.”

But really, what’s the problem?

Starting in the mid-1990s, a few years after Washington assumed the mantle of sole superpower, American leaders sought to integrate China into the power structures that Washington dominated. For instance, China was brought into the World Trade Organization in 2001.

The hope was that because Beijing was already moving toward a market economy, it would also move toward parliamentary democracy and rule of law. In other words, China would become more Westernized.

But a generation later, it hasn’t worked out that way. Even worse for American elites, Beijing’s success now serves as something of a model for other developing nations to follow as America’s “shining city on a hill” has lost much of its luster.

And so American elites are profoundly butthurt. This blue-check tweet, posted after another Chinese crackdown on Hong Kong late last year, captures the mood… 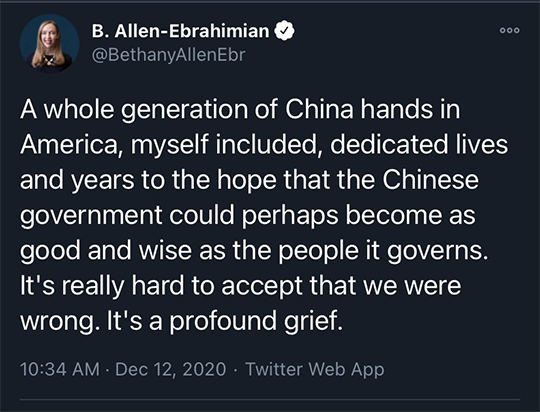 If you’re curious, that’s a writer whose bio describes her as “a journalist who covers China from Washington, D.C.” without a trace of irony.

Well, it comes back to that elite think tank’s lament that “China presents a serious problem for the whole of the democratic world.”

A well-known podcaster of your editor’s acquaintance recently said Americans must steel themselves for a generational challenge — much like, well, the original Cold War against the Soviet Union.

He invoked the “long telegram” written in 1946 by the U.S. diplomat George Kennan. Kennan’s missive was adapted as an anonymous article published in Foreign Affairs the following year. It was Kennan who introduced the word “containment” to describe U.S. Cold War policy toward Moscow.

Here’s the problem: Kennan was very clear that he thought containment was a political and diplomatic undertaking — not a military one.

But most of Kennan’s so-called “wise men” compatriots — like Secretary of State Dean Acheson and Secretary of Defense Robert Lovett — quickly seized upon Kennan’s framing to turn the effort into exactly that, a military one.

Only 15 years after Kennan issued his memo, President Dwight Eisenhower left office warning the American people about a “military-industrial complex” that posed “the potential for the disastrous rise of misplaced power.”

Fast-forward 60 years from Ike’s farewell address and a military response to an emerging superpower is the only thing Washington knows.

“The principal challenge that China presents is not military but economic and technological. But the United States is geared only to deal with military threats,” affirms Ambassador Freeman — with whom we began today’s missive.

In a speech earlier this year, Freeman said, “China has become the antidote to the U.S. post-Cold War-enemy-deprivation syndrome and a gratifying driver of U.S. defense spending.

“There are U.S. aircraft and ships aggressively patrolling China’s borders, but no Chinese aircraft and ships off America’s coast. U.S. bases ring China. There are no Chinese bases near America. Still, Washington ups its defense budget to make its ability to overwhelm China more credible. Yet in the long run, the United States cannot outspend China militarily and cannot hope to beat it on its home ground.”

But that won’t stop the military-industrial complex from trying. Let’s just hope we’re all still here by the time it’s all done.

To the markets, briefly, and then the mailbag, seeing as our 5 Mins. are nearly up…

Copper and other base metals are taking a hit after the Chinese government badgered commodity firms in the country to maintain “normal market orders.” Copper is down nearly 1% at $4.48 a pound after setting records above $4.70 days ago.

“Thank you for your recent story about the IRS expansion and the collection of taxes,” writes a reader from Kansas.

“I recently read in the Wichita Business Journal that the regional energy company Evergy earned $722 million in profits for 2020, but they didn’t pay ANY income taxes for 2020, equating to a -3.75% aggregate income tax rate.

“I typically vote more ‘R’ than ‘D,’ but why can’t big companies just pay their fair share of income taxes? Then there would be less drive to expand the IRS to look under every rock in America for an income.

“No credits no nothing and then whatever the government hauls in can’t be exceeded except for national emergencies like wars and such.

“It could be SO simple and so fiscally sound. Oh, also term limits for every elected position in America and that is ONE term! Those are my thoughts.”

The 5: Not ideal, but it’d be an improvement.

And yes, some companies indeed get a “rebate” on corporate income taxes, paying a negative rate. We pointed out how Amazon pulled it off a couple years in a row.

P.S. It looks as if the dam broke today…

“Vexing” is a good word for the mainstream to use when they’ve spent more than a year denouncing the lab leak as “conspiracy theory” but are now entertaining it as a live possibility.

The only question: Why now? Why does it suit the military-industrial complex’s purposes to shift the narrative at this time?

And is the sainted Dr. Fauci about to meet the same fate as other pandemic rock stars like Gov. Cuomo and Bill Gates?