Among the more arcane asset classes that got clobbered by COVID last year was… fine art. 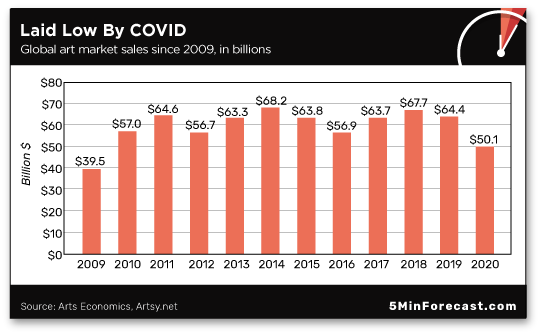 It would have been worse had galleries not successfully pivoted from in-person to online deals. “Galleries really did turn it around in the second half of [2020],” McAndrew tells Artsy.net. “People realized they were going to be living with some of these issues for a longer period, and that they had to ramp it up in terms of their digital marketing and digital sales.”

Now, with the reopening of the economies in the world’s three biggest art auction markets — the United States, the United Kingdom and China — both sales and prices are set to zoom higher.

But what’s it to you? You’re not well-heeled enough to buy fine art, right? Not the kind that can show huge price appreciation, anyway.

But first, ponder the unique appeal of fine art as an asset class.

It’s a critical wealth preserver for the “old money” families of Europe. And we do mean old — 300 years or more. This sort of dynastic wealth “has survived not only business cycles but also war, invasion, the collapse of empires, revolution and natural disaster,” wrote our Jim Rickards for U.S. News & World Report in 2012.

“When one inquires of family members and representatives as to what it takes to preserve wealth over centuries and not just cycles, the frequent reply is ‘a third, a third and a third.’ This is shorthand for dividing one’s wealth into one-third land, one-third gold and one-third fine art.

“Obviously some liquidity is needed for day-to-day expenses and some room can be made for a speculative portfolio, but the basic idea that land, gold and art outlast and outperform riskier assets such as stocks, bonds and cash seems sound when viewed from the perspective of centuries and not just years or decades.”

Across the sweep of European history, paper assets have often gone to zero. But gold, land and art endure, even under the worst circumstances.

“Gold,” Jim wrote, “can be gathered up and stuffed in a saddlebag or sewn into the lining of a coat and moved. Art can be removed from frames, rolled up and carried in one’s luggage. Admittedly land cannot be moved, but with good title and patience a family can reassert its claim even generations later once interlopers have been ousted.”

Assuming you have some gold in your possession, along with a plot of terra firma, even if it’s just the one your house sits on… how can everyday folks get access to fine art?

Depending on your budget, even the works of regional 20th-century artists can be out of reach. For instance, Bucks County Farmhouse by the Pennsylvania impressionist Walter Emerson Baum (1884–1956) was auctioned this month for $11,000. 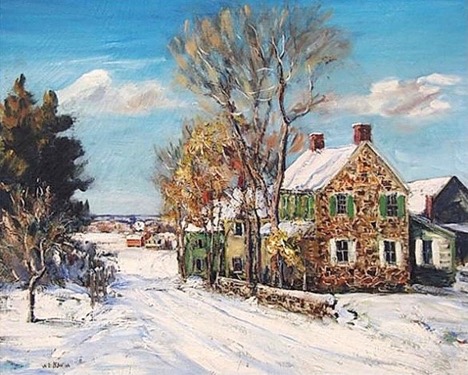 That’s where Masterworks comes in.

Starting with as little as $1,000, you can own fractional interest in individual paintings, via a simple and secure online transaction.

What’s the catch? Well, it’s not your choice when to sell the painting. That’s up to the folks at Masterworks, who patiently pursue the right offer so you can pocket the maximum gain. You can, however, sell your fractional share on the secondary market at any time.

Maybe best of all, you don’t have to do the heavy-duty research of a full-time art investor. Masterworks takes care of all that.

No, you can’t roll it up and take it with you in the event of societal breakdown. But you can lock in all the wealth appreciation that Europe’s old-money families enjoy from fine art.

Learn more about Masterworks at this link. Be advised our firm has a marketing relationship with Masterworks, so we’ll take a small cut of any transaction you choose to make. But we wouldn’t do an arrangement like that unless we were totally convinced that Masterworks does well by our customers.

To the markets, where the media’s MOAR INFLATION SELL! freakout of last week is looking more ridiculous by the day.

And so the major U.S. stock indexes are set to end the week in the green despite a huge inflation number today.

And not just any inflation number. It’s “core PCE,” the Federal Reserve’s preferred measure of inflation. It jumped 0.7% from March to April.

The year-over-year increase works out to 3.1%. The number hasn’t been this high since July 1992 — when the big box-office draw was Tom Hanks and Geena Davis in A League of Their Own and Sir Mix-a-Lot topped the charts with “Baby Got Back.” 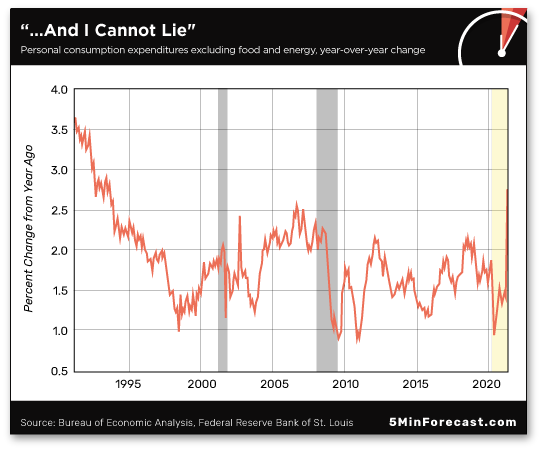 Again, we caution: “base effects.” The economy was all but shut down last April, so of course there’s going to be a big spike on this chart. The question is whether the number will still be elevated, say, three months from now. Presumably the year-over-year comparisons won’t be as dramatic. If they are, then the market freakout might commence for real.

Also, recall the Fed has changed its tune: While core PCE at 3.1% is far above the Fed’s 2% target, the Fed is now aiming for an average 2% over time.

Take another look at the chart. The Fed remains in no hurry to tighten monetary policy.

Going into the holiday weekend, gasoline prices are their highest in seven years. All we can say is get used to it.

The national average for regular unleaded this week is $3.03 a gallon. “Memorial Day weekend prices have not been this high since 2014,” says The Associated Press, “when they averaged $3.65 a gallon.”

We mentioned in passing yesterday that the president’s top Asia hand on the National Security Council said the following about China: “The period that was broadly described as engagement has come to an end” and “the dominant paradigm is going to be competition.”

We suspect high oil prices will be part of that paradigm.

In years past we’ve mentioned the book The Oil Card, by the energy-industry journalist James Norman.

Without going into exhaustive detail, Norman’s thesis is that ever since the advent of modern-day oil futures in 1983, the U.S. government has manipulated oil prices up and down to achieve various geopolitical ends…

Now, with the New Cold War against China well and truly underway, and the Biden administration picking up where the Trump administration left off, we feel confident in predicting a lengthy period of rising and sustained oil prices. Enjoy your $3 gas while you can.

“I think that any punishment meted out needs to be very targeted,” a reader writes on the topic of whether the “lab leak” thesis behind COVID is for real and if so, what the U.S. government should do.

“I’d imagine the average person on the street has no more connection or influence over what their government does than I feel I do here in the U.S., to punishments that affect the masses such as sanctions, dropping a bomb, etc., don’t punish the responsible parties.

“Targeted assassinations of culpable scientists and the politicians that sponsored or encouraged their actions? That I could get behind.”

The 5: Careful there. You realize the U.S. government funded some of the research at the Wuhan Institute of Virology, right?

“Just a quick comment about travel bans within versus in and out of China,” chimes in another reader.

“According to Statista.com (don’t know if this site is reliable) there were approximately 1.8 million air passengers into China per day in 2019.

“Unless there was a deliberate policy to infect the world, I suspect COVID-19 was out in the world long before any political action within China was formulated, including bans on travel.

The 5: Good point. Recall the Spanish study that found traces of the virus in a sample from Barcelona’s sewer system collected in March 2019. Also the CDC report asserting the virus had likely reached the United States by mid-December of that year.

On the subject of “price gouging,” a Financial Reserve reader writes, “this reminds me of something from close to 50 years ago.

“My uncle lived in Lakewood, Colorado, and the big deal in the local news was that the dairy farmers’ co-op had raised the price of milk by 2 cents per gallon. The next day the price in all the grocery stores was up 15 cents per gallon, and everyone blamed the farmers.

“But one enterprising reporter (remember the type?) started digging and found that the truckers who hauled the milk, the plants that processed it, other truckers that hauled it to the grocery stores and the stores themselves had each been struggling with rising costs (like the farmers) but unwilling to be the first to boost prices and take the heat.

“Two points: One, everyone looks for someone to blame, but two) everyone is struggling with rising input costs.

The most convincing argument against reflation is that this isn’t a normal economic recovery. Thanks to the virus and the lockdowns, supply chains remain hugely scrambled — thus, the “price gouging” complaints coming into our inbox.

Reflation or inflation? Maybe a little of both. Or a lot…

P.S. We’re back as usual tomorrow with our Saturday wrap-up called 5 Things You Need to Know. U.S. markets will be closed Monday for Memorial Day. The weekday edition of The 5 returns Tuesday.