“China previously had neither the economic power nor the political will to use legal means to retaliate against U.S. sanctions. It now has both,” says Wang Jiangyu, law professor at City University of Hong Kong.

Hours ago, the standing committee of China’s National People’s Congress passed a law aimed at countering other nations’ economic sanctions. Not just America’s, but Europe’s, Britain’s and Canada’s, too.

The details are still fuzzy, but Westerners are already alarmed. “Such action is not conducive to attracting foreign investment or reassuring companies that increasingly feel that they will be used as sacrificial pawns in a game of political chess,” frets Joerg Wuttke, president of the European Union Chamber of Commerce.

For their part, Chinese leaders feel they have no choice. All 14 vice chairs of the NPC standing committee are — personally — the targets of U.S. sanctions imposed after China’s crackdown on Hong Kong last year.

“Cooperation is the best option but the U.S. doesn’t want it,” says Wang, the law professor. “So retaliation, such as with this new law, is the second best option,” he tells the Reuters newswire.

“Sucking it up is the worst.”

And so is written the latest chapter in the annals of economic warfare.

We’ve been on this beat in The 5 for more than seven years now. China, Russia, Iran, North Korea, Venezuela — they and many others are in Washington’s crosshairs. As one expert put it in 2018, the U.S. government is “waging economic warfare against 1/10th of the world’s countries.”

Those countries make up more than a quarter of the globe’s population… and their leaders are looking for ways to push back, or at the very least to move toward “de-dollarizing” their economies.

And as we’ve chronicled every volley, every barrage of this escalating battle… we’ve also tried to identify a strategy affording you, the retail investor, the opportunity to parlay these moves into moneymaking trades.

Took a long time, but with the help of our Jim Rickards… we’re finally there.

He’s developed a system called COBRA — giving you a chance to grab a piece of the $6.6 trillion that changes hands every day as nations wage economic warfare.

It only makes sense that Jim would be the member of our team to finally figure it out. Over the years, he’s developed methods with the CIA to identify financial activity foreshadowing terrorist attacks… and he’s taken part in economic-warfare exercises with Pentagon brass.

It all comes together during a Special Profit Briefing he’s holding this coming Wednesday, June 16, at 1:00 p.m. EDT.

Access is free. Your spot is already reserved — all you need to do is follow this link to confirm it.

“The market might need some more time here before making a big move,” says analyst Greg Guenthner. “The averages have remained in a tight range for several weeks.

“A move one way or another is coming,” he says. “The question is when.”

For the sixth week in a row, initial jobless claims dropped… to a new pandemic-era low, in fact. The Department of Labor reports 376,000 new unemployment claims for the week ending June 5, which is 6,000 above what economists anticipated.

May’s Consumer Price Index (CPI) jumped 5% year over year — the highest reading since August 2008, just months before the real “Panic” set in. And core CPI — stripping out food and energy prices — came in at a 30-year high: 3.8%.

As for real inflation, the Shadow Government Statistics figure is 13.0%… more in alignment with your day-to-day experience, right?

But the central bankers are sticking to their guns. “Though the inflation readings are well above anything seen since the 2008–09 financial crisis,” CNBC notes, “the Federal Reserve has been largely dismissive of the numbers.”

“It seems like every time I turn around, I hear another skeptic talk about why the recent rise in inflation doesn’t matter,” says our retirement specialist Zach Scheidt.

“‘The rise in inflation is only temporary,’ they tell us. ‘The Fed has been trying to get inflation higher for years,’ says the financial media.

“But we both know better… You’ve got bills to pay:

“Whether that inflation is temporary or here to stay, it still takes more of your retirement savings to live your life.

“When fighting the effects of inflation you need to grow your wealth faster than the rate of inflation,” say Zach.

“If you just match the rate of inflation and continue to spend money on your day-to-day expenses, the true value of your savings will deteriorate,” he says.

What should retirees do? “Leverage the power of inflation to give you even more growth,” Zach says.

“When you hear the term ‘leverage,’ you might instinctively think of risky investments,” he says. “But I’m not talking about speculative trading for your retirement account…

“I’m talking about investing in companies that benefit from inflation,” says Zach.

“By investing in the three stocks I’m going to share today, you should be able to grow your wealth faster than the rate of inflation.”

“INVH currently owns — and rents out — about 80,000 homes in some of the hottest residential real estate areas: Atlanta, Orlando, Dallas, Seattle and Southern California.

“Recently, the sharp rise in home prices has helped drive shares of INVH higher,” he adds. “And I have a lot of confidence this trend will continue as inflation pushes home prices even higher. 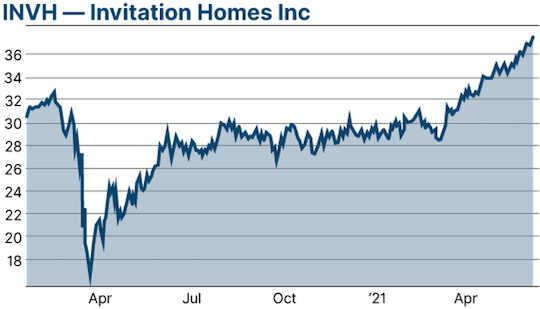 “Consider buying some shares of INVH today,” he says, “and maybe hold some extra cash to purchase more shares anytime we get a pullback.”

“And high demand for new homes along with the anticipation of a new infrastructure bill are driving prices for construction materials higher.

“Rising inflation naturally drives the price of these materials higher,” he says. As a result, “Wall Street analysts expect EXP to generate $9.34 in earnings per share next year, an increase of 17% over last year’s profits.

“Shares of EXP should continue to trade higher as both profits and the value of EXP’s resources are driven higher by inflation. 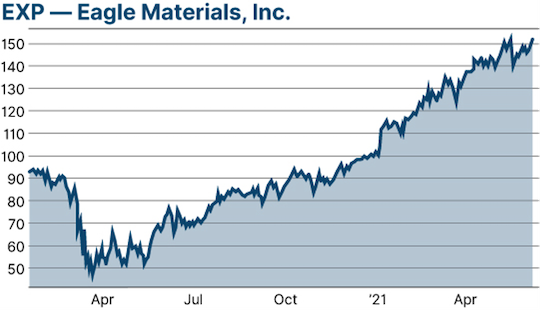 “Shares of EXP continue to hit new 52-week highs,” says Zach. “I wouldn’t worry too much about buying high, because rising inflation should continue to drive this stock steadily higher.”

Newmont Corp. (NEM): “In addition to holding physical gold and silver, it makes a lot of sense to invest in companies that produce these precious metals.

“The company produces roughly 8 million ounces of gold each year from its nine different mines spread around the world,” Zach notes. “NEM also has more than 20 development projects that will produce gold and silver in the future.

“As inflation drives the price of gold higher… Wall Street analysts are currently projecting a 32% increase in profits over the next year. And that projection should increase as gold prices break out.

“And we’re already seeing the stock move higher in response to inflation concerns. 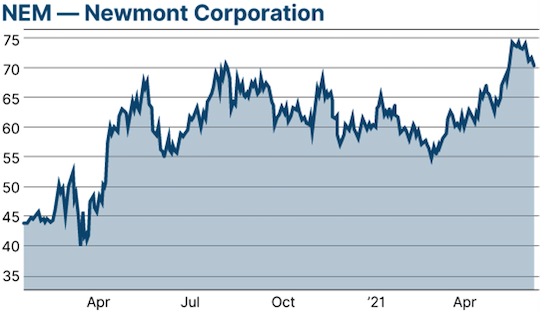 “Meanwhile, shares of NEM currently pay you a 3.1% dividend yield,” says Zach. “That income can help you cover growing retirement expenses while growing your wealth at a faster rate than inflation.

“All three of these stocks have moved higher in recent months,” he says, “but the risk of inflation is just getting started.

“So don’t wait too long to start investing in these inflation busters,” Zach concludes. “After all, your retirement expenses are already surging higher as inflation spreads across our economy.”

“The world’s largest-known gold rock specimen, dubbed King Henry after it was unearthed at a West Australian mine three years ago, has gone on permanent display after being sold to the Perth Mint for $3 million,” says an Australian ABC affiliate. 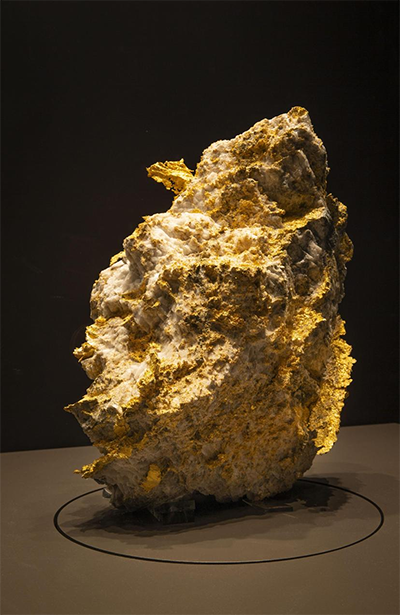 The Perth Mint purchased King Henry in 2019 to preserve the specimen so it can be enjoyed by the public at the mint’s museum. (You can book a tour for a reasonable $19… even less in USD.)

And no, the nugget isn’t named after that King Henry — rotund as he was; instead, the rock’s moniker comes from the miner Henry Dole, who unearthed the rock in 2018. Speaking of, the gargantuan nugget weighs more than 207 pounds and contains 1,400 ounces of gold.

Perth Mint’s CEO Richard Hayes says: “We’re very privileged and proud to have been able to be part of maintaining this part of Australia’s cultural heritage for display.”

[Better late than never] A reader took The 5 — and our guest editor John Englander — to task over “A Different View on Climate Change.”

After poring over the April issue, the reader says: “Love The 5, but… I’m amazed nobody ever checks the math. You quote John Englander from the Rising Seas Institute: If Greenland were to melt, the sea levels would go up 25 feet.

“That’s going to be tough. According to Wikipedia, Greenland’s highest point is only 12,119 feet.

“This also doesn’t bring in the fact that when water freezes, it gets bigger, so Greenland would need to be even more than 35,750 feet tall. Now, maybe some ice is below sea level, but that wouldn’t raise water levels; it’s already displacing the water!

“Also, since water gets smaller when it melts, that would lower sea levels?”

John Englander, author of Moving to Higher Ground, was kind enough to write in…

“I sincerely applaud your effort to figure out if my numbers seem reasonable. That is good science,” Mr. Englander responds.

“The thing that’s confusing about Greenland is the difference between LAND and ICE. The figure of 410,000 square kilometers that you use is the actual land area above sea level. But the ice sheet that covers the land is five times larger in square area,” says Mr. Englander.

“This image should help… 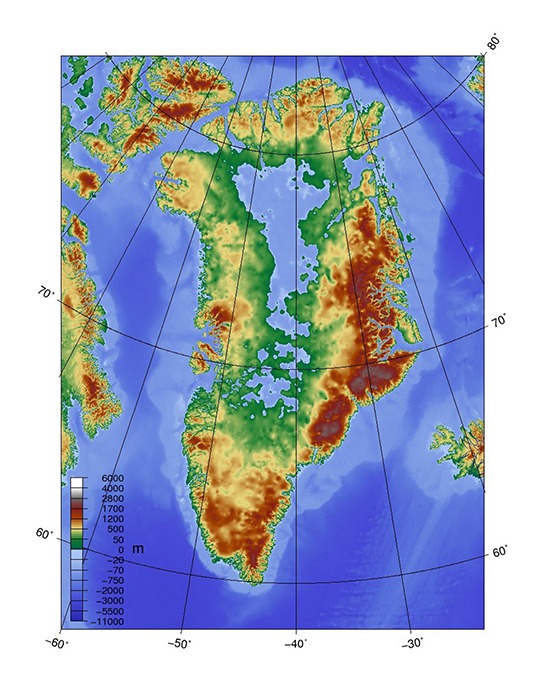 “The green is near sea level and the blue depicts the area that is below sea level,” he says. “Likewise, the height you reference is the highest point of land. Neither measurement of the land form reflects the height or volume of the ice sheet, which is over a mile thick.

“Indeed, Greenland would account for about 25 feet (7 meters) of global sea level rise if it all were to melt. For corroboration, see this Wikipedia geography section, explaining the ice sheet versus land and the amount of global sea level when it all melts. They reference more scholarly articles too, should you want to dig deeper.

“Their analysis (and mine) is fully supported by scientists at NASA, NOAA, ESA (the European Space Agency), China, Germany, Japan, etc.

“Hope this helps restore your confidence in The 5,” Mr. Englander concludes.

We sincerely appreciate Mr. Englander’s clarification, and as always, we value our dialed-in readers…