The Chinese Communist Party is desperately trying to stay ahead of a demographic time bomb. It will likely fail… and as the bomb detonates, it means accelerating inflation for you and me.

It was only six years ago that Chinese leaders did away with their decades-long “one child” policy… and only last month that the limit for couples rose from two to three. Now they’re talking about perhaps doing away with all limits by 2025. 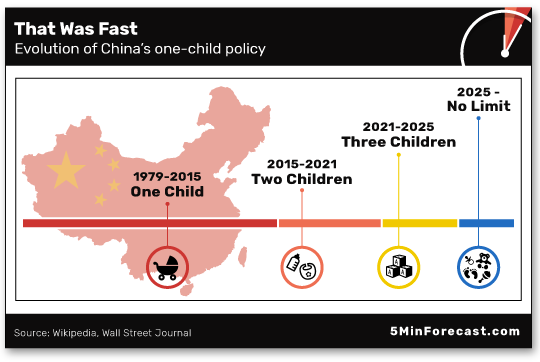 It’s been a grim running joke among demographers and Asia-watchers for years: “Japan got rich before they got old. China risks getting old before they get rich.”

As our macroeconomics maven Jim Rickards explains it, “China now has an insufficient number of younger people coming into the workforce to replace the rapidly aging adult workforce.”

Clearly Chinese leaders are panicked about this trend. All the recent changes come after the release of the country’s every-10-years census data a few weeks ago.

But it’s all too late, says Jim.

For one thing, the move from a one-child to a two-child policy in 2015 did not lead to a baby boom. Quite the opposite: Those census figures show 12 million Chinese babies were born in 2020 — down one-third from 18 million in 2016.

“If relaxing the birth policy was effective, the current two-child policy should have proven to be effective too,” Commerzbank economist Hao Zhou tells the Reuters newswire.

“But who wants to have three kids? Young people could have two kids at most. The fundamental issue is living costs are too high and life pressures are too huge.”

[A nice reminder that everyday folks in China face the same struggles as Westerners, no?]

“China is facing a world,” says Jim Rickards, “where an increasingly large part of the population will be in their 80s and 90s suffering from Parkinson’s disease, Alzheimer’s syndrome and dementia (all of which are presently incurable and highly correlated with longevity) while the declining prime age workforce will have to devote more resources to elder care.”

That inevitably translates to fewer people available for the construction and manufacturing work that’s been the engine of China’s growth for 30 years now.

“The result of that will be higher wages as Chinese companies compete for fewer and fewer available workers.”

Key point: “Those higher wages will in turn act like an inflation pump to send higher prices around the world,” says Jim.

As perhaps you already know, Jim improbably agrees with the Federal Reserve’s stance that inflation right now is “transitory.” He believes the accelerating inflation rates of the spring will back off this summer and fall.

But as Jim told us here in April, the Chinese demographic time bomb will re-ignite inflation starting in 2022. Forget about “cheap Chinese labor” feeding us an endless pipeline of cheap consumer goods across the Pacific. It’s over.

“The Chinese people,” Jim concludes, “have adapted to the one-child world and have turned their backs on large families. Chinese families today (many composed of only children born in the 1980s and 1990s) simply don’t want large families.

“Get ready for a less productive and more inflationary world, all because of China’s misguided and inhumane effort to control normal population growth.”

What to do? As Jim told us in April, “The biggest winners will be those who invest in hard assets such as oil, natural resources, gold, silver and real estate.”

As a new week begins, the “post-Fed letdown” in the stock market appears to be wearing off.

The freakout over the Fed accelerating its timetable for raising short-term interest rates — it’s still more than two years from now, fer cryin’ out loud! — is looking sillier by the day.

Bitcoin’s taking a hit after more regulatory rumblings from China — down 8% and below $33,000.

As long as we have inflation on the brain, let’s talk about another inflation-fighting asset you’ll want in your quiver during the years to come.

“There’s never been a better time than now to invest in dividend-paying stocks,” says our income-investing specialist Zach Scheidt. “By investing in the right dividend stocks, we can keep up with inflation and prepare for retirement without the worry of losing it all to market volatility.

“For starters, most dividend-payers are mature, stable companies that are often leaders in their field. And second, in many cases, their dividend payments handily beat the rate of inflation.”

“That equals a compound annual growth rate of slightly more than 9% year over year, whereas inflation has averaged 2.37% per year over the same time period.” And that doesn’t even take share price appreciation into account.

“No matter which way you look at things, you simply can’t go wrong investing in dividend-paying stocks,” Zach continues.

“Take the ProShares S&P 500 Dividend Aristocrats ETF (NOBL), for example, which tracks the companies in the S&P 500 that have increased their dividend payments on an annual basis for at least 25 years.

“From April 2020 through April 2021, when inflation rose 4.2%, the Dividend Aristocrats ETF rose almost 62%! (Further proving that you don’t have to take a risk on highflying tech stocks or crypto to capture exceptional gains.)”

Bottom line: “When we buy shares in stable, dividend-paying companies, not only are we investing in a stock that’s delivering steady share price appreciation… We’re also getting additional income in the form of regular dividend payments.

“This not only helps us prepare for retirement but face the ever-present danger of inflation, as well.”

Necessity is the mother of invention, chicken-wings edition: The Wingstop chain is responding to a wing shortage by launching a new brand. It will be called… 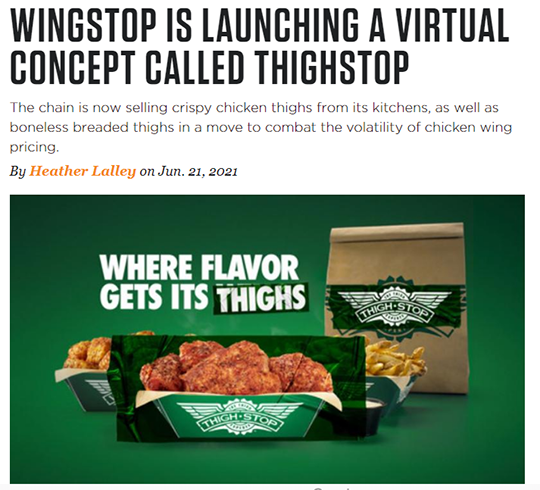 If you hadn’t heard, chicken wings are among the many items with pandemic-scrambled supply chains.

“There’s a real supply constraint out there,” Wingstop CEO Charlie Morrison tells Bloomberg, “and it centers on the availability of workers to actually process the chicken. The amount of chickens that are being put in the supply chain is actually far lower than it has been in the past. It makes it a little trickier for us.”

“Wingstop will run Thighstop as a virtual brand out of its 1,400 U.S. restaurants,” says Bloomberg, “and sell bone-in and boneless thighs alongside fries and corn. That will help contain rising prices, Morrison said, capping any menu hikes at their normal 1–2% annual increase.”

Says Morrison, “Too often these days, thighs are stuck in the bottom of a bucket of chicken. “We believe that we can finally give thighs the focus and attention they deserve.”

We like his choice of words there. Mildly suggestive, but with totally plausible deniability. Heh…

“Well, heck. That was a sobering edition,” a reader writes after Friday’s 5 — which started out on the lighter side and, yes, quickly turned dark.

“I was wondering if you could supply references (URLs or otherwise) in support of the collateral-damage items from the section about Libya — increase in jihadis, refugees flooding Europe, increase in African slavery.

“Thanks for the perspective check! It’s making me wonder about the true (worldwide) human cost of our American/Western lifestyle and prosperity.”

The 5: Ah, you’ve forced us to confront the “curse of knowledge.”

This is a concept the marketing gurus Chip and Dan Heath described in their 2007 book Made to Stick. You become so familiar with a topic that either you assume too much knowledge on the part of your audience or you get tripped up on nuances while trying to explain basic concepts.

In this case, your editor has internalized the disaster of the Libya war — The 5 was warning about potential blowback even while Gaddafi was still alive — to a point where I just know this stuff while having long forgotten original sources.

Without a lot of time to look it all up, here’s an older account of how Libya’s civil war tore apart Mali, which isn’t even the country next door — and a more recent summary from the London Telegraph about the lingering jihadi conflicts across West Africa.

Meanwhile, here’s a real-time 2015 MSNBC report about the refugees (not that it linked the crisis to Obama’s decision to invade, of course) plus a 2020 report from Amnesty International. And here’s a 2017 Time article about Libya’s slave trade.

If video is more your thing, click below for a concise 9:00 summary of the Libya war and everything that went wrong with it — courtesy of our acquaintance Scott Horton, author of 2021’s Enough Already: Time to End the War on Terrorism. 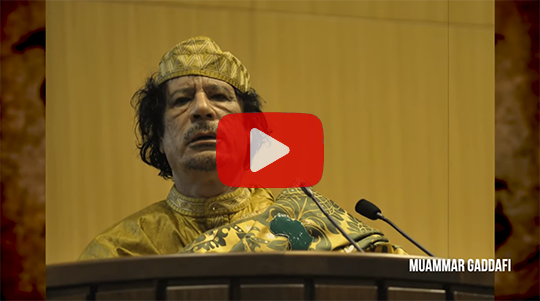 Basically it’s a fast-paced video adaptation of Chapter 8 from the book — one of a dozen or so videos in a series.

Meanwhile, there’s a long sordid history about the true cost of Western prosperity, as you put it. Maj. Gen. Smedley Butler — America’s most-decorated Marine at the time of his death in 1940 — laid it out in a series of speeches, and later a book called War Is a Racket.

From a speech in 1933: “I helped make Mexico, especially Tampico, safe for American oil interests in 1914. I helped make Haiti and Cuba a decent place for the National City Bank boys to collect revenues in. I helped in the raping of half a dozen Central American republics for the benefits of Wall Street.

“The record of racketeering is long. I helped purify Nicaragua for the international banking house of Brown Brothers in 1909–1912… I brought light to the Dominican Republic for American sugar interests in 1916. In China I helped to see to it that Standard Oil went its way unmolested.”

Whatever you want to call those sorts of arrangements… you sure as hell can’t call it a “free market.”