That’s a helluva way for the government to default on Social Security, I thought to myself.

Yes, I’ll back up a bit. It’s long been your editor’s position that Uncle Sam defaulting on Social Security is not a future occurrence — because in many ways, it’s already happened.

In 1983, the feds changed the rules. “Full retirement age” was raised from 65 to — roughly speaking — 66 for boomers and 67 for Xers. In addition, the feds started classifying Social Security benefits as taxable income.

In 2015, the feds did away with “file and suspend” — a strategy many couples were using to maximize their benefits.

And throughout the decades, the feds have changed their “inflation” yardstick in ways designed to keep a lid on Social Security’s annual cost-of-living increases.

Default is a strong word, but all of those changes amount to a default on the program’s prior promises.

Which brings us to the matter of making Social Security benefits contingent on getting a COVID vaccine.

I first encountered the idea a few weeks ago as the fevered nightmare of a random individual on a message board, or maybe the comment section of a blogpost. I dismissed it and moved on with my day.

Turns out the idea was broached with all seriousness this past Sunday on ABC’s This Week With George Stephanopoulos.

On an obnoxious panel of pundits, conservative Margaret Hoover — whose claim to fame is being a campaign aide to George W. Bush in 2004 and Rudy Giuliani in 2008 — said it’s time to lower the boom on the “vaccine-hesitant.”

Liberal panelist Rahm Emanuel, awaiting a new gig as U.S. ambassador to Japan, swooned in accord: “You know, I’m having an out-of-body experience, because I agree with you… It becomes a reward/punishment type system, and you make your own calculation.”

There’s a lot to unpack in Ms. Hoover’s indignant stream of consciousness there. Including: Who the hell is “we” in this construction?

But let’s address the reward/punishment thing first. On some level, I suppose you can justify making Medicaid contingent on any number of behaviors; it is, after all, a welfare program.

Same problem with Social Security, even as Hoover acknowledges it “obviously isn’t health care.” Americans pay a substantial portion of their earnings into the Social Security system, yet Ms. Hoover frames the payment of benefits as a handout bestowed by a magnanimous “we.”

From the context, it appears “we” constitutes not necessarily the vaccinated but rather the power elite — the likes of Ms. Hoover, Mr. Emanuel and so on.

David Frum gave voice to the elites’ grievance last week in The Atlantic. Frum, to refresh your memory, is the guy who wrote Bush 43’s “Axis of Evil” speech in 2002. He also wrote an obscene smear against “Unpatriotic Conservatives” like Pat Buchanan and Robert Novak, published in National Review on the eve of the Iraq invasion in 2003.

“Does Biden’s America have a breaking point?” Frum wondered. “Biden’s America produces 70% of the country’s wealth — and then sees that wealth transferred to support Trump’s America. Which is fine; that’s what citizens of one nation do for one another… [But] the reciprocal part of the bargain is not being upheld…

“Will Blue America ever decide it’s had enough of being put medically at risk by people and places whose bills it pays? Check yourself. Have you?”

So we’re back to the whole “taker states” thing — an economic subtext to the oh-so-tiresome culture wars.

We explored this phenomenon in some depth one day during more innocent pre-COVID times. Basically, if the individuals and businesses in your state send less money in taxes to Washington than the state gets back from Washington, then you live in a taker state.

There are different ways of calculating which are “taker” states and which are “donor” states. But they all work out more or less the same. Here’s one representative map compiled by New York’s Office of the State Comptroller; donor states are in red, taker states in varying shades of green. 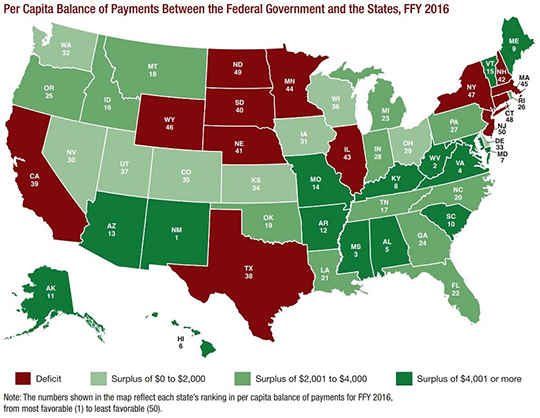 While there are exceptions, again depending on the calculations, “donor” states tend also to be high-population “blue” states while “taker” states tend to be more rural and “red.”

It would be more fair to say she won the places that benefited most from the “big fat ugly bubble” Donald Trump warned about in 2016 (and then desperately tried to keep inflated once he was elected — dude really was like the dog that caught the car).

She (and Joe Biden) won the places that were first in line to receive the Federal Reserve’s post-2008 flood of EZ money — the DMV (D.C. and surrounding counties in Maryland and Virginia), Wall Street-New York City, the Silicon Valley-Bay Area and the Route 128 corridor in Massachusetts.

And so these elite conceits are manifesting themselves in new ways during the time of the virus.

“The people who say they’re paying the bills,” wrote the independent journalist Matt Taibbi this week, “have spent years now trying to let the rabble know there’s a limit to both their patience and their generosity.”

Now, 16 months into a pandemic, “They’ve made it clear there are limits to how much speech freedom they’ll confer, how much political choice or right to assembly will be permitted, how much ignorance will be allowed to fester.”

Of course, scolding the skeptics as “selfish” and “irresponsible” — and threatening their future Social Security benefits — is just about the worst way to persuade them to get vaccinated.

Then again, it’s not really about persuasion as much as reinforcing tribal loyalties — as someone from The New York Times, of all places, reminds us… 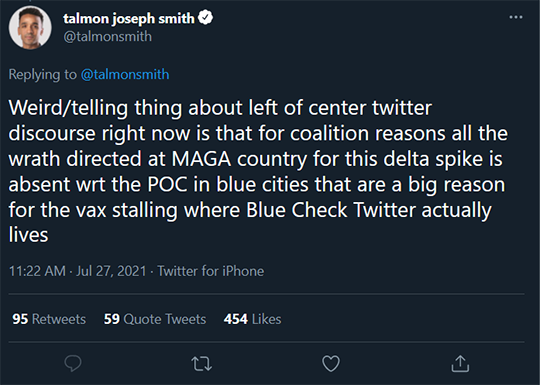 And on the matter of tribal loyalties, we conclude our ramble today with this disquieting thought shared with us by a reader in 2019 pre-COVID times.

“Those 2,626 counties Trump won in a blowout [in 2016] grow most of the food. If a civil war breaks out, do you think the conservatives will continue to feed the liberals? That I got to see.”

To the markets, which are not engaged in a “taper tantrum.”

Rewind: It was in May 2013 that Fed Chair Ben Bernanke went before Congress and suggested the time was approaching for the Fed to start “tapering” its purchases of Treasury debt and mortgage-backed securities — a huge stream in that aforementioned post-2008 flood of EZ money.

Wall Street went into a snit. Stocks and bonds both sold off hard. Thus, the Fed carried on with its purchases for another year.

Here at The 5, we had months of fun with the whole thing, routinely invoking the image of an animal with a similar spelling. (OK, you had to be there.) 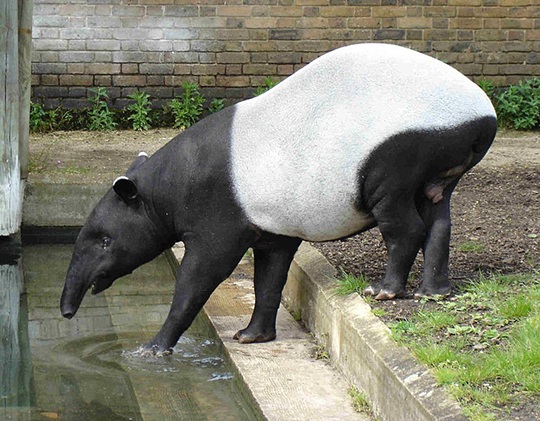 Yesterday in its every-six-weeks policy statement, the Fed broached the subject of tapering its pandemic-era bond purchases — perhaps even starting later this year.

Counterintuitively, the Fed announcement put some life in precious metals. Gold is up to a two-week high at $1,831 and silver’s back within a quarter of $26.

Perhaps — just perhaps — Wall Street is already sensing the Fed will have to abandon the taper talk and keep the pedal to the metal if the COVID case counts keep rising?

Bitcoin hovers just below $40,000, unfazed by rumors the infrastructure bill just hammered out in the Senate will include some sort of crypto tax.

For the record: “The economy” as measured by GDP is now back to pre-pandemic size.

The Commerce Department issued its first guess at second-quarter GDP this morning. It grew 1.6% from the first quarter — or an annualized 6.5%.

The number is skewed even more than usual by robust consumer spending — up 11.8%. In contrast, business investment — you know, the thing that actually makes future prosperity possible — rose a paltry 3.0%.

Whatever. As we’re wont to remind you, GDP is a statistical abstraction with zero relevance to your life or your standard of living. But Wall Street pays heed to it (to say nothing of Hillary Clinton, see above) so we can’t ignore it altogether.

“Yesterday’s 5 raises some serious concerns regarding the credibility and reputability of your ‘technology and science maven’ Ray Blanco,” a reader writes.

We don’t have time to air all of the reader’s concerns here. But we’ll share the gist: “Nowhere has there been a double-blind, placebo-controlled trial comparing the effects of COVID-19 on the vaccinated versus the unvaccinated.

“According to sound scientists such as Dr. Bret Weinstein and Dr. Geert Vanden Bossche, the vaccinated seem to bearing the brunt of immune suppression and thus the increased rates in Israel.

“If this is the work Ray Blanco puts out in the arena of science and technology, I can honestly say it’s not worth investigating his trends research. I was ‘on the fence’ somewhat about purchasing his trends newsletter in the science and technology sector; however, statements such as the one mentioned seem to reek of blind parroting and regurgitation of [mainstream] information.”

The 5: There’s only so much time our 5 Mins. allow on any given day. What we shared yesterday is not the sum total of Ray’s thoughts on the subject.

In the first place, long before the Pfizer shots started going in arms, it was Ray who first helped us understand the difference between mRNA jabs and conventional vaccines. And he’d be the first person to acknowledge they’ve not gone through the full battery of clinical trials; they were approved under an “Emergency Use Authorization.”

Are there potential problems? Yes. For one thing, “It’s possible that the spike protein itself is not really good for your cardiovascular system,” Ray says in a conversation this week with 5 founder Addison Wiggin. It “does cause some inflammatory problems in some people.”

In addition, “You’ve got to think about risk/benefit,” Ray says. “If you’re an older person… well, the benefit definitely outweighs the risk.” But that might not hold true for everyone. “Just concentrate on our at-risk population,” and then collect “years of data after administration.”

And to be sure, it’s concerning when the CDC’s latest mask guidance is driven in part by evidence that, as USA Today puts it, “vaccinated individuals could have higher levels of the virus and infect others amid the surge of cases driven by the Delta variant.”

Finally, and without wanting to sound too cavalier about it, the safety and efficacy of anything coming out of the biotech sector is a separate question from its investment viability — which, of course, is Ray’s main area of focus. Seriously, give his entry-level research a try. Worst case, you call our toll-free number and get a full refund.