The treatment is FDA-approved… and several prestigious hospital systems, including the Cleveland Clinic, won’t administer it.

We mentioned its approval in early June. The drug passed the FDA’s safety tests. Efficacy, however, is another matter. “The FDA’s decision was based on the drug’s ability to remove amyloid plaques,” says an NPR summary this week, “rather than any proven ability to slow the symptoms of Alzheimer’s.”

Amyloid plaques are a classic hallmark of Alzheimer’s. Removing them is indeed a breakthrough. But if it doesn’t slow the symptoms… uh, what’s the point?

Understandably, however, some patients and their families are willing to give it a try anyway.

”I think we need to figure out a way to present that option to [patients] in a way that’s safe,” Dr. Alireza Atri tells NPR.

Atri runs the Banner Sun Health Research Institute in Sun City, Arizona. He was also a consultant to Biogen, maker of the drug.

“I don’t think this drug will be a major game changer for patients,” says our science-and-wealth maven Ray Blanco. “But the potential market is huge.” Thus, FDA approval last month sent Biogen stock soaring from $270 a share well past $450 in no time; it’s back to $330 now.

Which leads to the question: What if a truly viable Alzheimer’s treatment comes along?

Ray is on the case of one that he finds uniquely promising. And its development is approaching a crucial juncture. The company behind it trades for about $10 a share. Before all’s said and done, it could be trading for $100… or in an extreme scenario, as much as $430.

The markets are ending the week on a muted note.

As we write, the Dow is down less than a quarter percent and still holding the line on 35,000. The S&P is down about a half percent, sitting at 4,400 on the nose. The Nasdaq is down three-quarters of a percent to 14,665.

But that’s just one morning’s action. “Even after a profit-taking pullback last week, the averages pushed forward to completely erase those losses AND climb higher,” says our floor-trading veteran Alan Knuckman.

Word. Does anyone even remember the 725-point drop in the Dow a week ago Monday?

“With these new developments I’m looking at a technical target of 4,550 and 15,500 in the S&P and Nasdaq, respectively.

“We also have crude oil making a comeback move right now, sitting comfortably above $73. Crude oil is a trusty barometer for continued economic growth and seeing it climb gives a reliable look at the overall health of the market.”

Yes, there’s a point where crude prices rise far enough and fast enough to be a drag on the economy and the stock market. But we’re not there now.

“The Fed keeps buying bonds and has maintained zero percent interest rates, which will continue to provide a lift to the market,” affirms our investment banking veteran Nomi Prins.

“Whereas we think there will be moments ahead when inflation fears still rise and Treasuries trade off as a result, this cheap money will keep driving stock and bond markets upward.”

In Washington, it appears the House will go into a seven-week break tomorrow without raising the debt ceiling. But the Congressional Budget Office seems unperturbed for now, saying the Treasury can get away with various accounting tricks to stay under the ceiling until at least October.

After months of acceleration, it appears the inflation rate is leveling off.

The Commerce Department is out this morning with “core PCE” — the Federal Reserve’s preferred measure of inflation. It rose 0.4% in June, compared with 0.5% in May.

Year-over-year that works out to an inflation rate of 3.5% — well above the Fed’s 2% target, but remember the Fed is OK nowadays with the number running hotter than 2%, at least for a while.

The same report shows personal income inched up 0.1% in June, while consumer spending jumped 1.0%. Both of those figures exceeded expectations.

The savings rate is 9.4% of disposable income — the lowest yet during the pandemic era, but still above the pre-pandemic norm. That suggests plenty of capacity for still more consumer spending, to say nothing of more stock purchases by everyday investors.

Supply-chain snag of the day: More than 8,500 members of Canada’s Border Services Agency are set to go on strike as early as Aug. 6, a week from today.

“Many border workers would be deemed essential,” reports the state broadcaster CBC — “but the union said strike action could slow down commercial traffic at the border and ports of entry, hit international mail and parcel deliveries from Canada Post and other major shipping companies and disrupt the collection of duties and taxes on goods entering Canada.”

The workers have had no contract since 2018. Demands, per the CBC, include “salary parity with other law enforcement workers in Canada, better protections against harassment and discrimination, and a remote work policy for non-uniformed members.”

A federal judge is getting fed up with the FBI’s brazen tactics against the customers of U.S. Private Vaults — a California outfit furnishing safe-deposit boxes.

In March, the feds raided and shut down U.S. Private Vaults’ facility in Beverly Hills — accusing the firm of money laundering, among other offenses.

The warrant expressly forbade the FBI from seizing the contents of customers’ boxes, but the FBI went and did it anyway — not bothering to charge those customers with a crime. Lawyers for some of the customers say the raid was analogous to searching every unit in an apartment complex because the management company is accused of wrongdoing.

One customer sued, claiming to have lost more than $900,000 in cash and valuables. Prosecutors moved to dismiss the suit, but Judge Gary Klausner was having none of it.

As we chronicled last month, Klausner temporarily halted the seizure of 369 customers’ boxes. The case is a long way from resolution, but it appears Judge Klausner recognizes that due process still means something. 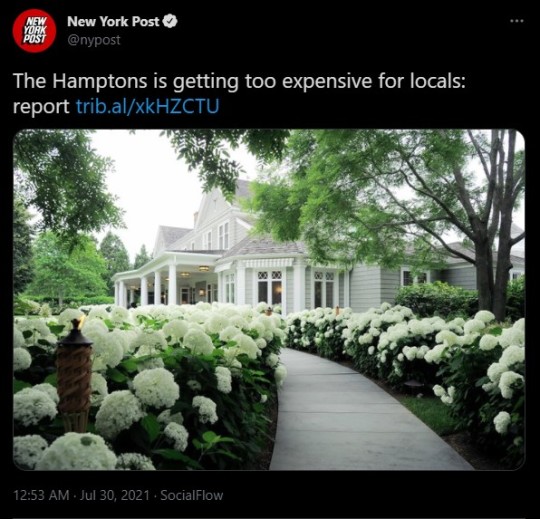 Seems in the pandemic era, the Hamptons — the famously hoity-toity section of eastern Long Island — has been overrun by even wealthier people fleeing Manhattan.

“There’s so much money now it’s nauseating,” a homeowner tells Vanity Fair, wishing to maintain anonymity. “I’m a 1-percenter. But I bear no resemblance to these people.” She describes one newcomer who had “enormous” fully grown trees planted on the property, one a day for several days running, at a cost of roughly $75,000 a day.

Worst of all, the newcomers are thinking of running for office — at least judging by a Hamptons moms Facebook group: “…Homes range from $5-150 Million. We are the main source of money that flows through the system out here and why shouldn’t more of us be public officials?”

“That was an AWESOME 5 Mins!” a reader enthuses after our “No Vax, No Social Security” edition yesterday.

That was all the reader said, but we’ll take our compliments where we can get them.

Writes another: “So if your information is correct (and sadly, it fits very well), we can soon expect a regulation coming down that says that you have to be vaxxed, or you can’t get any government aid (Medicare/Medicaid or Social Security).

“I have three brief comments:

“1) The government has no right to know my vaccination status, unless they repeal HIPAA. That should destroy their regulation from the get-go. Besides, coming down with COVID provides better immunity than the shots, apparently.

“2) The government has never before demanded lifestyle modifications in order to receive Medicare or Medicaid. Otherwise, you would think, for example, they would tell smokers to quit smoking or they will not get governmental medical insurance.

“But we now have a government that ignores logic and precedent and is eager to lock in punitive measures. Keep a keen eye out for this ruling coming to a theater near you.”

The 5: Maybe it’s just the elites blowing off steam. But we wouldn’t lay down money on that possibility.

“I liked very much how you handled the subscriber’s complaint in the last section of yesterday’s edition,” writes another reader. “Very objective reply without any bias.”

The 5: You might be the only one. Otherwise, we got it from all sides.

One fellow addressed nothing we said, instead doubling down on the original complaint: “Ray Blanco would have been better off not commenting at all on this experiment, which is still in a multiyear discovery phase… [He] has severely damaged/compromised his credibility with many of the informed, anti-coercion readers.”

But on the other side of the coin, a reader was apoplectic that we included the original reader’s mention of certain vaccine heretics by name, such as the biologist-turned-podcaster Bret Weinstein.

And on the other-other side of the coin, a reader recommended the work of still another heretic, Baylor cardiologist Peter McCullough.

We throw up our hands…

On to a related topic from yesterday: “In the brouhaha over red and blue areas, forget for a moment about where food is grown,” a reader writes.

“Instead, ponder where your precious toilet paper comes from. In this so-called ‘taker state,’ I often see trucks loaded with logs destined to become the rear-cleansing material that was in such short supply during the pandemic. It would be a shame for such a shortage to happen again.”

The 5: Your editor feels a new sense of assurance, watching the logging trucks roll by the home office. My police scanner even picks up their CB radio conversations…

Finally, on the subject of the redesigned Campbell’s soup label…

“In this day and time, when a food manufacturer changes the outside of a container I have to wonder what’s being changed on the inside. Was there any information about the quantity of soup? I have an uneasy feeling there may be less than the usual 10.75 oz. going forward.”

The 5: To the best of our knowledge, no. But elsewhere on the grocery shelves, “shrinkflation” is real. And growing.