Fasten your seat belts: One of the cheapest airlines around is experiencing considerable turbulence…

The meme-worthy, stripped-down Spirit Airlines has been cancelling flights like crazy this week — “blaming weather and staffing issues for the number of cancelations,” notes the travel blog One Mile At A Time. 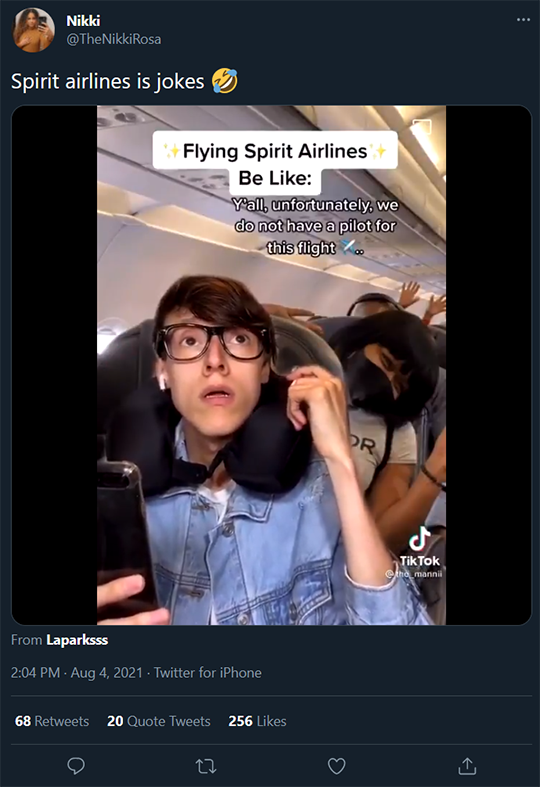 And the flight attendants are working remotely…

“This just seems to be a good old-fashioned airline summer meltdown that happens every so often, except to the extreme.” Just how extreme?

“At this point, one almost has to wonder if the airline is better off shutting down for a couple of days and regrouping,” One Mile At A Time concludes.

So while Spirit Airlines circles the drain (at least temporarily), geologist and mining expert Byron King wonders if affordable air travel is in a death spiral for other reasons…

“Flying used to be costly,” Byron says, “in many respects a luxury.” Which conjures a bygone era when passengers actually dressed up for their flights. It was an event…

But by the early ’90s, air travel fully opened to the masses — sure, sometimes unwashed masses — particularly with the advent of “up-and-coming, low-cost airlines with no frills but cheap tickets,” Byron notes. “Think Spirit in the U.S., Ryanair in Europe or Lion Air in Indonesia.

“Behind it all… [one thing] has been critical to opening up travel to the masses,” he says. “Affordable jet fuel. In essence, kerosene.

“Absent relatively cheap kerosene (aka jet fuel), much of the airline industry business model fails, definitely the ‘low cost’ part of it.

“If you’ve looked out the window at an airport terminal,” says Byron, “you’ve probably seen a fuel truck that carries Jet-A.

“Let’s be honest, unless you’re interested in organic chemistry, you probably don’t know much about the fuel that goes into an airplane’s tank.” 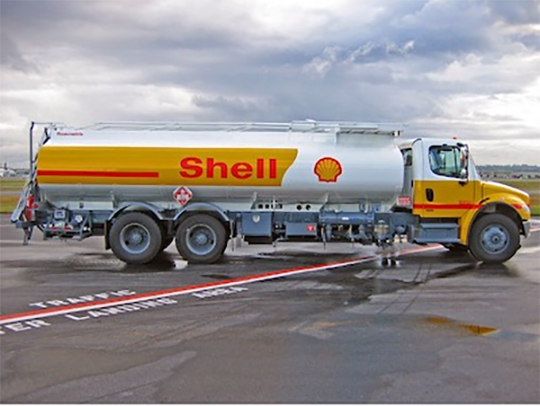 Without it, you’re grounded…

“For a long list of reasons, [refined kerosene] is the best fuel to burn in an axial turbine jet engine,” Byron continues.

“Scientists and engineers have been working on the chemistry of oil-based jet fuel for about 80 years, and by now they pretty much have it right.

“Jet fuel must meet certain aviation specs. First, it must have a low freezing point — around -40 to -50 degrees — otherwise, the fuel lines will freeze up at high altitudes,” Byron says.

“Then there’s the ‘flash point’ — the temperature at which fuel vapors ignite. You want that to be relatively high, for safety reasons.” Umm, yeah…

“You also need energy to spin those turbines in the engines, and you want high energy density. “Kerosene/jet fuel fits the bill perfectly,” Byron says. “Not to mention, you want your fuel to be affordable. It [can’t cost] too much to produce and store…”

As for the fairy-tale future of aviation: “airplanes powered by biofuels, batteries or even pure hydrogen,” Byron says. “Nope. Won’t happen.”

“Hindenburg, anyone?” he asks. Hard pass on hydrogen then…

Notwithstanding: “There’s a global push against oil in general,” Byron says. “The U.S. government and governments across the globe are biased against internal-combustion engines due to carbon emissions,” he says.

“And many… are making it hard to produce and refine petroleum as motor fuel, which impacts the future of jet fuel, too.

“And fewer cheap [tickets] for passengers…”

The upshot? “Flying is about to become more expensive,” says Bryon, “and many people will soon find themselves priced out.”

“We’ll be using oil-based jet fuel for many years to come,” Byron contends. “Except that we’re also looking at more expensive oil because of government bias.” Add to that, “all manner of restrictions on refining and emissions, especially carbon dioxide.

“In the future, you may still be able to fly,” he concedes, “but the rising cost of jet fuel will drive ticket prices up, up and up.”

Byron attributes this to “distorted… energy policy,” he says, “in particular, new policies [which] will inevitably reduce availability and drive up the cost of jet fuel.”

So we’ll be time traveling to the distant past, he says, to the days when air travel was a luxury. “On the bright side” — heh — “people might get back to dressing better on airplanes,” Byron concludes. Amen to that!

The U-3 unemployment rate dropped to 5.4% from 5.9% in June… And we’re now in better shape than the worst of the Great Recession. Yay?

On the big chart from Calculated Risk depicting the job losses and recoveries from every recession the last 75 years, here’s where we stand… 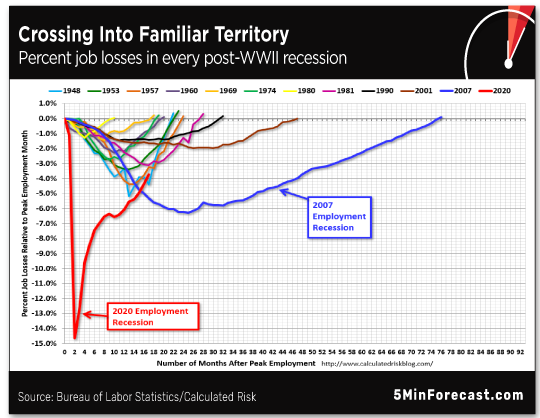 Who knows what to anticipate next month after the Delta variant is factored into these numbers? Stay tuned…

As for the flagship crypto Bitcoin, the digital asset is rallying hard today: up almost 5% to $42,874 at the time of writing.

For more on crypto, we follow up on Wednesday’s episode when The 5 reported SEC Chair Gary Gensler’s promise that the SEC would use all its current powers to regulate crypto…

Gensler telegraphed on Tuesday that “regulators may be more open to a Bitcoin ETF if it was based around futures rather than the cryptocurrency itself,” Bloomberg reports.

But not all are brimming with excitement over Mr. Gensler’s pronouncement.

“Many crypto backers voiced distress over the chairman’s preferred structure. An ETF focused on Bitcoin futures would require that investors put down a substantial amount of money on margin to trade, among other issues.”

Bloomberg notes: “Many have been hoping for a physically backed Bitcoin instead.”

“All this does is add unnecessary layers of middlemen and derivatives. It’s not what the people want,” says Bloomberg Intelligence ETF analyst Eric Balchunas.

“Investors would be better served by a physically backed ETF and I really think they understand the risks,” Mr. Balchunas says. “At this point, even my mom knows what Bitcoin is about and that it’s not the same as a Treasury.”

To wit, ETF and mutual fund manager VanEck has been put on ice in terms of the SEC’s review of its own Bitcoin ETF proposal, something we’ve mentioned from time to time at The 5.

“The Securities and Exchange Commission said in a Wednesday filing that it will delay its decision on whether to approve the VanEck Bitcoin Trust a second time, extending its review process and requesting comment from interested parties on how the rule change could impact markets,” CNBC says.

“Can’t predict what the SEC will do,” CEO Jan van Eck says, “but investors are really asking for a more efficient access vehicle.”

Be that as it may, Gensler seems bound and determined to protect us Main Street hayseeds from the Wild West-ness of crypto…

Well, this really goes against the ecological grain… On Tuesday, we might have lampooned European sustainability experts’ wishful thinking. An American family of four living in just 640 square feet, using 40 gallons of gas per year and eating only 2,100 calories per day? Pfft… Dream on.

Now the first in a series of Financial Times articles featuring the bonkers U.S. housing market suggests Americans are — quite literally — moving in the opposite direction.

“Redfin reported last month that median home prices in ‘car-dependent’ U.S. areas had surged at twice the pace of those in ‘transit-accessible’ cities since the start of the pandemic — with the former gaining 33% while the latter increased 16%.” 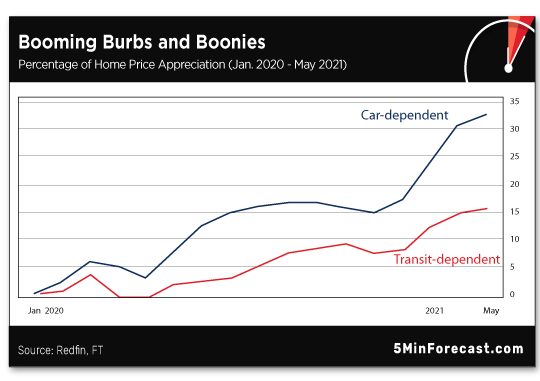 So much for the infrastructure bill’s billions earmarked for public transportation! But the government’s aim that 50% of new car sales be EVs by 2030? Perhaps. Assuming house-poor suburbanites will be able to afford them…

In a series of six tweets, Steak-umm urged readers to — among other things — reach across ideological divides to achieve something akin to understanding.

We reluctantly admit, the tweets were pretty meaty… 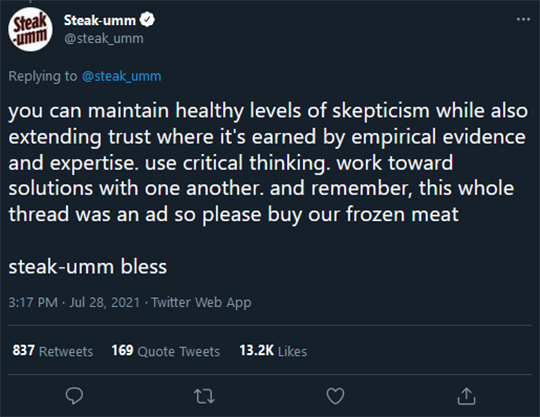 Overall, we’ve got no beef with the message (even the sales pitch that puts a button on it). The real question here: Can we level the same skepticism at Steak-umm? Umm… mystery meat?

You all enjoy the weekend! Don’t forget to check out Saturday’s issue…