“Daniel Gibbs had received only four monthly doses of Biogen’s experimental Alzheimer’s drug in a clinical trial in 2017 when he ended up in an intensive care unit,” says an article at The Boston Globe.

What makes Daniel Gibbs’ experience with Biogen’s Alzheimer’s drug — brand-name Aduhelm — so exceptional is that Gibbs is a retired neurologist who once treated Alzheimer’s patients.

What landed him in intensive care? An agonizing headache and blood pressure as high as 206/116, leading physicians to believe he might be having a stroke. 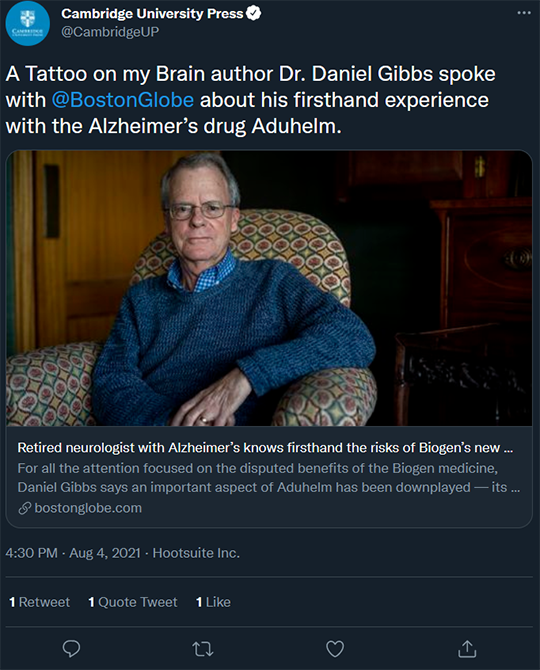 “Doctors prescribed medicines to lower his blood pressure,” the article says, “and later to reduce brain swelling. But for weeks afterward, he struggled to read, follow conversations and do simple math.

“He recovered but never again took the Alzheimer’s drug.”

“For all the attention focused on the disputed benefits of [Biogen’s] medicine, Gibbs says an important aspect of Aduhelm has been downplayed ― its risks.”

Theoretically, at least, here’s how it works: “The drug reduces a sticky protein called amyloid that clumps into plaques in the brains of people with Alzheimer’s. Some doctors believe amyloid buildup causes cognitive impairment, although that’s unproven and fiercely contested,” the article continues.

What’s indisputable, however, is around 40% of patients in Biogen’s clinical trials — patients who received the highest dose of the drug, in other words — showed abnormalities including brain swelling and microhemorrhages on MRI scans.

“More than three-quarters of those ‘amyloid-related imaging abnormalities,’ or ARIA, caused no symptoms,” The Boston Globe says. “But about 6% of patients on the highest dose had to stop taking the drug.

“Biogen acknowledges that swelling in particular is common, but says it usually goes away on its own and that doctors can manage ARIA with MRI scans during treatment.”

Dr. Gibbs says: “I fault Biogen for being dismissive about the ARIA. I had a severe, potentially life-threatening reaction to the drug.”

In fact, Gibbs was taken aback when the FDA approved the drug on June 7 despite Aduhelm’s risks and murky trial data. “In one study, a high dose delayed cognitive decline by 22%. The other trial failed to prove the drug was effective.

“Like members of an independent advisory panel to the FDA that overwhelmingly voted in November that the agency shouldn’t approve the drug,” the article concludes, “[Gibbs] would have preferred that Biogen be directed to conduct a third trial.”

All of which points to the crying need for a truly viable Alzheimer’s treatment. Our biotech expert Ray Blanco’s following one such promising drug, and he believes the drug’s development is approaching a critical juncture as early as THIS Saturday.

The company behind it trades for about $10 a share. Before all’s said and done, it could be trading for $100… Ray makes his case right here.

“Yesterday, Big Tech was in the driver’s seat as gains from AAPL and TSLA powered the Nasdaq into the lead,” he says. Today? The tech-loving index is down just a fraction of a percent to 14,810.

“Disney (DIS) is the big headline this morning after beating estimates thanks to strong Disney+ numbers and improvement from its parks division, offering a glimpse at the light at the end of the pandemic tunnel,” Greg says. “Investors like what they see and are bidding up shares” — 3% at the time of writing — “helping to push the Dow into the lead.”

To be clear: “Passive ETFs have already overtaken index-based mutual funds in the U.S., where the instruments have an explicit tax advantage due to a quirk in capital gains tax regulations,” The Financial Times says.

Worldwide? “Global assets under management of passive, index-tracking ETFs hit a record $8.66 trillion at the end of June, according to data from Morningstar, just $132 billion shy of those in passive mutual funds.”

While that still seems significantly “shy,” here’s some perspective: “The gap has narrowed from $623 billion at the end of 2019 and $305 billion in December 2020, suggesting that stronger inflows will make ETFs the dominant format for index investment globally in the second half of this year,” the FT says.

“Welcome to the future,” says geologist and mining expert Byron King, after accompanying his friend — and new Tesla owner — on a highway drive. A breakneck drive…

Last week at The 5, Byron made the case EVs might make owning a vehicle cost-prohibitive for middle-class folks, considering all the “green” restrictions global elites want to impose on the rest of us. Today, Byron takes the other side of the argument; specifically, how everyday investors can profit from the EV revolution.

“Not long ago,” he says, “The Wall Street Journal ran an article about how major auto companies are dramatically cutting back on their former focus on internal-combustion engines (ICE). And they are doing it quite rapidly.

“One element of the EV transformation that definitely will benefit many investors is the industrial chain that supplies metals and materials to the overall manufacturing cycle.

“Today, a typical ICE vehicle has anywhere from 50–150 pounds of copper inside, depending on the model of car, size, etc.,” he says. “But a similar category of EV will use about three–four times as much copper, in terms of its wiring and motor.

“Hey, no wonder copper prices have been flirting with long-time highs, with forecasts to go even higher. It’s the beginning of a long-term cyclical bull market for the red metal,” Byron says. Other “familiar” metals used in the manufacture of EVs include nickel, silver, lithium and graphite.

“As for REs, quantities of materials will similarly soar (and soon) especially for high-torque traction motors. Inside those motors, strong permanent magnets allow them to do their thing, using the near-magic elements neodymium and dysprosium.

“EVs also require… other REs for everything from battery packs (which often use lanthanum) to the electronics that control power systems,” Byron says. “The bad news, China has built up a dominant place in the global [RE] supply chain, by dint of forward thinking over many decades.

“Which brings us back to the beginning: That EV ride was a true kick in the butt,” Byron says. “It was a demonstration of where cars and transportation are going, as well as a reminder all those electric metals and REs are investable,” he concludes.

“Some of the largest companies in the world, including Google, Facebook and Amazon, are about to discover the impact that antitrust law can have,” Jim Rickards anticipated at The 5 in pre-pandemic January 2020. Jim’s forward-thinking thesis is coming to fruition under the leadership of Biden appointee and FTC Chair Lina Khan.

Within weeks of her appointment, for example, the FTC filed a complaint against Facebook, which a federal judge dismissed in June. “Success would [have been] seen as vindication for her theories of antitrust and her criticism of Big Tech,” The Financial Times says. Nonetheless, it was one of the FTC’s most highly publicized lawsuits in years.

“In the past two months, Khan has begun a fundamental revamp of the [FTC], rescinding policies designed to limit its legal powers, changing the way it makes decisions and promising to rewrite the statements which underpin antitrust enforcement in the U.S.”

The FT continues: “Khan’s allies say it is significant that her first major actions were to undo policies put in place by the two previous Democratic administrations” — Clinton and Obama — “which were designed to give business more certainty about when the FTC might act but which they believe have tied the regulator’s hands.”

At some point this summer, Ms. Khan’s mettle — and indeed the FTC’s mettle — will be tested as the commission considers refiling its case against Facebook “with a new explanation of Facebook’s monopoly power, which could yet result in the breakup of the social media company.”

If you build it, they will come (back)…

Did you catch Thursday night’s MLB game played at the Field of Dreams stadium? 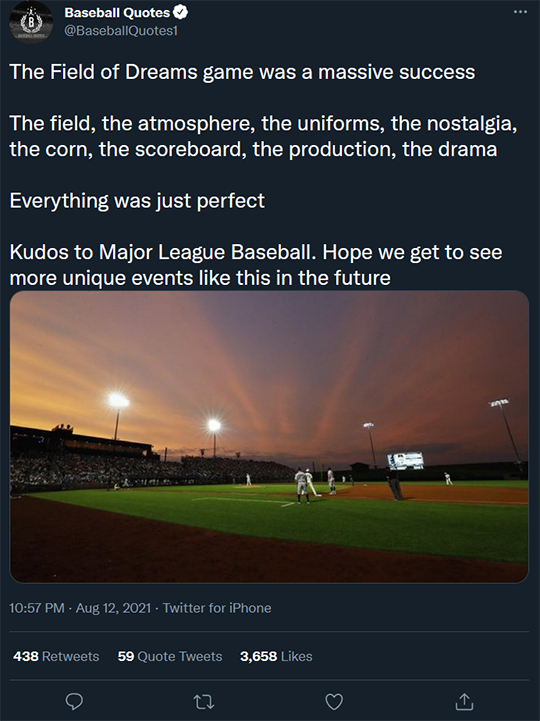 “As the Yankees took batting practice to prepare for the inaugural ‘Field of Dreams’ game against the White Sox, at a pop-up ballpark built right through a cornfield from the original movie set, commissioner Rob Manfred announced the intention to hold a sequel,” The New York Post says.

But even before batting practice, Chicago Cubs’ manager David Ross let slip Wednesday that his team would serve as the Iowa stadium’s home team in 2022.

“It of course makes all the sense in the world for the Cubs to follow their neighbors to the south, given Chicago’s proximity to [Iowa],” the article says. “If this tradition keeps going, you could easily see the Cardinals, Royals, Twins and Brewers playing close enough to serve as a home team.”

While Manfred didn’t confirm the Cubbies taking the Field of Dreams in 2022, what he did confirm? “The reception has been so positive, we will be back next year. It’s been so successful.”

What I will not confirm? Getting a little misty when players took the field last night…

Take care of yourself this weekend… and check out Saturday’s issue.