So screams a headline at Zero Hedge about the impending default of China’s second-largest property developer Evergrande Group. Or as Ben Hunt of Epsilon Theory puts it: the “story no one is talking about.” 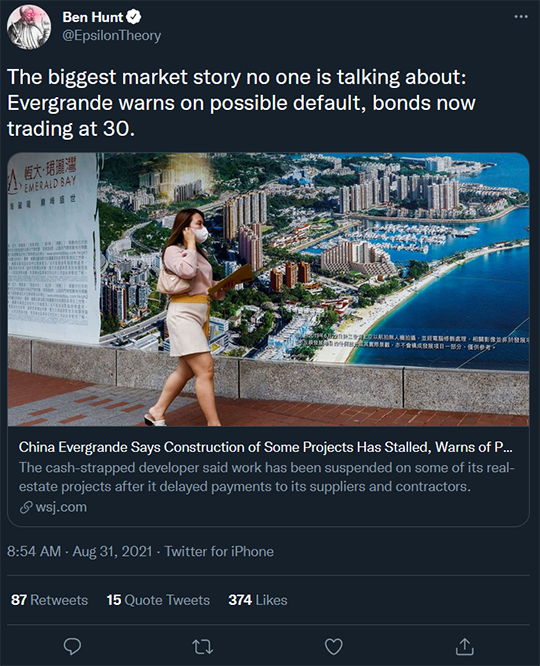 In the past couple weeks, it’s become apparent Evergrande is flat broke after the company couldn’t pay its vendors and contractors. As a result, construction projects have ground to a halt. Not good optics, to say the least.

“The highly indebted company on Tuesday also warned for the first time that it may default on its borrowings if it can’t resolve its liquidity problems,” says an article at The Wall Street Journal.

“Evergrande… said it has been selling assets and apartment units to raise cash. The group also said that ‘with the coordination and support of the government,’ it is actively negotiating with suppliers and construction companies to try to get them to resume work on its properties.”

But will Beijing bail out Evergrande? The company — which is reportedly $3.9 billion in debt — is holding out hope…

Says WSJ: “Earlier this month, the country’s financial regulators summoned Evergrande’s senior executives to a meeting in Beijing, and urged them to fix the company’s debt issues without destabilizing the property and financial markets.”

In an Op-Ed at the Financial Times billionaire hedge fund manager George Soros believes Beijing will let it burn. “Xi Jinping, China’s leader, has collided with economic reality. His crackdown on private enterprise has been a significant drag on the economy,” he says.

“The most vulnerable sector is real estate, particularly housing,” Soros continues. “Evergrande… is overindebted and in danger of default. This could cause a crash.”

Nevertheless, too big to fail doesn’t seem to be in Xi Jinping’s vocabulary…

“The Chinese Communist Party does not care if they destroy market capital,” says Jim Rickards.

“The CCP is fine with market losses as long as they receive loyalty and obedience from Chinese companies,” Jim elaborates.” These ideas are quite foreign to the way U.S. regulators think, but they are typical of Communist Chinese leadership.

“The Chinese Communist Party has declared war on its own companies, especially large tech companies…

All of which signals that entrepreneurship and even the Chinese stock market’s success are subordinate to party loyalty.

“The CCP has decided that the New Cold War is a fact of life,” Jim contends. “There is no longer any pretense that the U.S. and China will compete in a semi-friendly rivalry.”

(Longtime readers of The 5 know the “New Cold War” is a thread we’ve been following since 2010… including Dave’s exceptional riff on the theme from 2019.)

“Instead, the New Cold War is viewed as a multi-decade long, adversarial struggle between the U.S. and China for control of the Western Pacific and Eurasia,” Jim says. “More broadly, it is a struggle for control of the governance model for the world.

“These ideological and security-related differences will be exacerbated by a coming currency war as China cheapens the USD/CNY cross-rate by devaluing CNY to boost its slowing economy.”

Jim’s takeaway? “The combination of tech wars and currency wars is a recipe for China’s economic drawdown.”

[Ed. note: Capitalizing on this trend in July, Jim and his team booked a trade with 144% upside…

Once again, readers of Jim’s trading service Tactical Currency Profits are perfectly poised to reap big gains from the wild fluctuations of major currencies around the globe.

Let Jim walk you through how COBRA works when you follow this link.]

The Institute for Supply Management (ISM) reports its measure of national factory activity unexpectedly edged up to 59.9 in August from a reading of 59.5 in July.

Economists anticipated a reading of 58.6 last month, but recall any reading over 50 indicates expansion.

“The ISM survey’s forward-looking new orders subindex rebounded to a reading of 66.7 last month after two straight monthly declines,” Reuters says. “Demand is being driven by businesses desperate to replenish stocks after inventories were drawn down sharply in the first half of the year.”

The pandemic-era fly in the ointment: “A measure of factory employment dropped to a nine-month low, likely as workers remained scarce.”

For the record: Trustees for the Social Security trust fund released their annual report Tuesday, indicating payouts to recipients will exceed the fund’s income in 2021.

The “good” news? “While the pandemic had a significant impact on the program, the trustees said, they expect Social Security’s reserves to be depleted by 2034, only one year sooner than they estimated in their April 2020 report,” The Wall Street Journal says.

Things take an even darker turn when Social Security trustees speculate “elevated mortality rates related to the pandemic” might “significantly impact the outlook of the programs.”

Our retirement specialist Zach Scheidt says he’s generally wary of crypto, but says: “I’m keeping an open mind.” Should you?

Zach notes famed hedge fund manager John Paulson once said: “Cryptocurrencies, regardless of where they’re trading today, will eventually prove to be worthless.” But when Paulson was asked if he would bet against crypto, Paulson declined. Hmm…

“Despite his bold prediction that cryptocurrencies will turn out to be worthless, Paulson has the humility to know that he could be wrong,” Zach extrapolates.

“That’s just not the type of risk that Paulson wants to take,” he says. “And it’s not the kind of risk you should take with your retirement savings either.

“I love the idea of taking a portion of your retirement savings and investing in aggressive, speculative plays with high potential gains,” Zach says. “Cryptocurrencies and some of the stocks that are tied to these new investment vehicles can fit into that category

“But as the saying goes: Don’t bet the farm.” Word.

From veggie “burgers” to cauliflower “rice,” state governments continue to police the marketing of vegetarian and vegan products. Perhaps a recent California decision will stop the madness…

Sonoma County-based Miyoko’s Creamery received a bullying letter last year from California’s Department of Food and Agriculture (CDFA), demanding the vegan company remove any dairy-related terms — including “butter” and “cheese” — from its products. (We suppose the CDFA had a bone to pick with “Creamery” too.)

“Instead, the state suggested that Miyoko’s market its vegan butter as oh-so-appetizing ‘cashew cream fermented from live cultures,’” Reason reports. “To do so would require an inordinate investment to produce custom packaging for sale of the product in California.”

So in the early days of the pandemic, Miyoko’s Creamery filed suit against the CDFA, claiming the state agency was stifling the company’s First Amendment right to free speech. And on Aug. 11 this year, Judge Richard Seeborg of the U.S. District Court for the Northern District of California ruled in favor of Miyoko’s Creamery.

“Seeborg… pointed out a major hole in the state of California’s argument: There was no evidence of consumer confusion or marketing deception,” Reason says.

“Ray Blanco needs to get his facts straight,” a reader grouses after reading Tuesday’s missive. “The big batteries for energy storage have as primary metal not lithium but [redacted]. Do a little more research and get it right,” he says.

The 5: Ray’s aware. In fact, he uses the advances in lithium-ion battery technology as a template for batteries using this “mystery metal”… 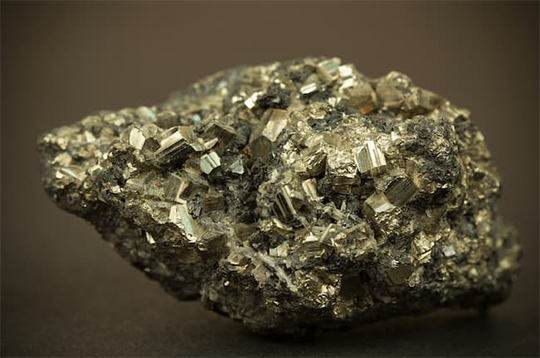 Ray says: “When it comes to energy storage batteries, this mysterious metal is simply a superior battery chemistry to lithium-ion.”

Get Ray’s full report on this energy-industry disruptor right here. Ray even reveals his No. 1 ticker symbol for playing this new tech boom with 12,000% potential. No sign up required.

Take care, and we’ll be back tomorrow.