“Care to bet that when Texas tried to transport its gold from NYC to TX, HSBC balked,” a longtime reader writes, referencing the saga of the Texas Bullion Depository…

… “because the gold supply was ‘encumbered by claims,’ so they offered to liquidate the metal for dollars?”

For the record, we decline to take the other side of that wager. And seeing as our reader goes way back with The 5, no doubt he’s well aware of gold’s supply squeeze… as well as the difference between real gold and paper gold.

To that point, here’s a gem from our archive, circa 2011, when GoldCore analysts raised “concerns about the possibility of double accounting of gold and concerns that much of the gold investments in the market are, in fact, ‘paper gold’ and not backed by physical, as is believed by investors.” 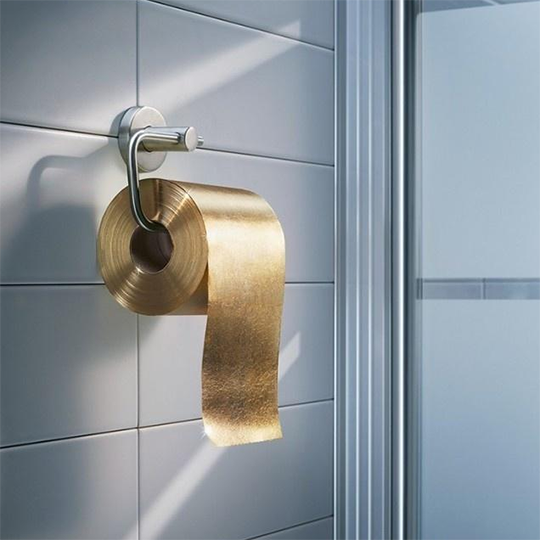 Or earlier this year, Jim Rickards warned of another danger: “In practice, unallocated gold allows the bank to sell the same physical gold 10 times over to 10 different buyers.”

The outcome? “If every holder of unallocated gold showed up all at once and demanded their gold, there wouldn’t be nearly enough to go around,” Jim said. “It’s paper gold.”

And now, a retrospective of August 2021…

Jim says: “Another month, another slam… I wouldn’t blame gold investors for thinking exactly that.”

“Measuring the overall price action from the close on Aug. 5 to the interim low on Aug. 8, the entire decline was a sickening 7.2% collapse.

“In a matter of 15 minutes on a Sunday night, almost 17,500 gold futures contracts traded hands,” Jim emphasizes, “equivalent to 54 metric tonnes of gold with a value of over $3 billion.

“This happened through electronic trading when the physical markets in Singapore, London and New York were all closed,” he says. “Singapore and Tokyo were celebrating national holidays, so liquidity was even more thin than usual in the electronic markets.

“Ironically, this gold smash occurred almost one year to the day when gold made its all-time high of $2,069 per ounce on Aug. 6, 2020. (It was not much of an anniversary celebration for gold investors.)

“On the one hand, it’s as if nothing happened,” Jim says. On the other hand? He says what happened on Aug. 8 is “one of the most blatant cases of gold price manipulation in history” and “impossible to ignore.

“The identity of the trader or traders who pulled off the Aug. 8 smash in the gold futures market is not publicly known,” Jim says. “It could have been a central bank, a hedge fund or a consortium of hedge funds acting in concert.

“The odds that there was technical price manipulation are high, but the odds of any enforcement action by the CFTC or CME are low,” he says. “The tendency among regulators is to let [traders] slug it out.

“The good news is that gold once again dug its way out of the trough,” Jim says.

So Jim’s takeaway: “One should not be discouraged by [gold’s] drawdowns,” he says. “Instead, be encouraged by gold’s resilience.

“If a 54-metric-tonne gold slam on a Sunday night can’t throw gold off its game, then nothing will.” Boom.

[Editorial note: We’ve reminded readers from time to time what Jim Rickards advises: “I recommend having at least 10% of your portfolio in physical gold and silver,” he says. “And with threats of inflation and a devalued U.S. dollar, it’s more important than ever to preserve your wealth.”

If you share Jim’s concerns, our partners at Hard Assets Alliance have everything you need to fine-tune your portfolio. Hands down, it’s the easiest way to buy, sell, store and take delivery of real physical metal — gold, silver, platinum or palladium.

Plus, HAA has an unrivaled network of wholesalers who can scrounge up supply when other retailers can’t. And the premiums it charges are among the lowest in the business.

Again, here’s the signup link. As always, the disclaimer: Our firm owns a piece of Hard Assets Alliance, so you can expect us to take a small cut once you fund your account. But we wouldn’t have taken that stake unless we were fully confident Hard Assets Alliance would do right by our customers.]

The wonks at the BLS conjured just 235,000 new jobs in August — the fewest number in seven months.

Econoday’s consensus forecast? Apparently, an overly optimistic 740,000. (Mind, it takes 150,000 new jobs just to keep up with population growth.) You know who else might be overly optimistic? President Biden, who says this morning our economy is “durable and strong.” 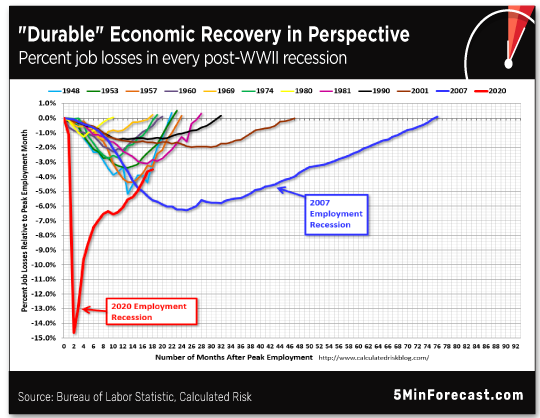 On the bright side, the U-3 unemployment rate fell to 5.2%, the lowest in almost a year and a half. And wage growth increased 0.6%. Okay…

But cutting through the noise, ShadowStats’ unemployment rate lands at an abysmal 25.4%, unchanged since last month.

Mr. Market, for one, didn’t care for the “employment situation” (but he’s settling down now). The Big Board is the only major U.S. index still in the red: down 45 points to 35,395.

For the supply-chain story of the day, we turn to IHS Markit researchers, including analyst Daniel Yergin, who tells CNBC: “Shipping, port and manufacturing data finds that the worsening delays will continue well into 2022.

“Moreover, pessimism is growing among shipping executives,” he says, “some now expecting the disruption to continue even into 2023.” Oy…

“IHS Markit’s latest PMI survey of global manufacturing finds that the delays in delivery times are the most severe ever recorded, going back a quarter century.”

And it has everything to do with ports around the world, clogged with unloaded shipping containers. “The whole global system is choked in the face of what Gene Seroka, the head of the Port of Los Angeles, calls ‘unrelenting consumer demand.’”

“Fully loaded containerships are being forced to wait for berth space at anchorages off the largest U.S. port gateway, Los Angeles/Long Beach, as well as several other ports in North America, Asia and Europe.

“Forty-nine containerships were idled at anchor off of Los Angeles/Long Beach as of Aug. 29, the most ever, and up from just nine on June 18,” IHS Markit reports.

Something that’s come to the attention of our retirement specialist Zach Scheidt who says — tongue in cheek, we think — “Christmas is cancelled!”

He elaborates: “These containerships carry everything from new vehicles and machinery to merchandise set to be sold in stores this holiday season.

“Normally, these ships would be taking their turns being offloaded at the two California ports and returning to our overseas trading partners. Instead, they’re stuck waiting for an open slot at the port. And there’s no telling how long the wait could last.”

To Zach’s way of thinking: “The heart of the problem is a lack of available workers to dock the ships, offload the containers, drive the trucks and cover all the other tasks necessary to keep the ports operational.”

So a word of warning to holiday shoppers: “Even though many of the things we’ll be trying to buy for Christmas may already be manufactured and purchased by retailers, it’s not necessarily going to be on shelves when you’re ready to buy,” Zach says.

And in broader terms, we give the final word to IHS Markit: “This unprecedented situation is causing prices to rise at one of the fastest rates in a decade” and “is one of the main reasons for the surge in inflation.”

Just in time for Labor Day… 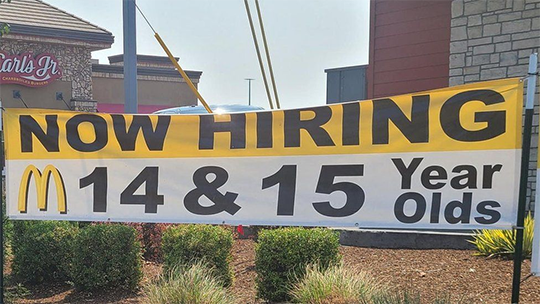 “A branch of McDonald’s in Oregon… is calling on 14- and 15-year-olds to apply for jobs at the restaurant amid a shortage of fast-food workers,” the BBC reports.

So far, opening up to younger applicants seems to be working. Franchise owner Heather Kennedy reports a surge of 25 applications since she displayed the revised “Now Hiring” sign.

Hmm… Just brainstorming here, but could 14- and 15-year-olds offload shipping containers? Prolly not…

You all enjoy the Labor Day weekend! We’ll be back Tuesday…