Well, the post-Labor Day sprint to the end of the year is already off to a stumbling start… 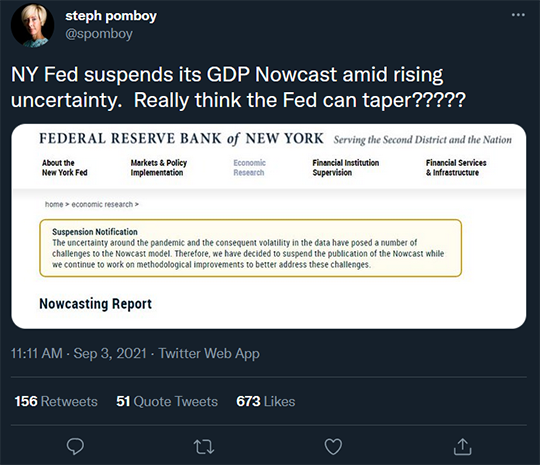 The Federal Reserve Bank of New York offers a constant rolling projection of the current quarter’s GDP. Or it did until last Friday, when it suspended the practice until the proverbial further notice.

The day before, Morgan Stanley — one of the New York Fed’s member banks — slashed its own third-quarter GDP outlook. Slashed, hacked and burned, really — from 6.5% annualized to only 2.9%. The bank chalked it up to “payback from stimulus spending as well as continued supply chain bottlenecks.”

That’s not the half of it, says Jim Rickards — who reminds us the eviction moratorium and expanded federal unemployment benefits are all expiring, well, right around now.

“The economy is quickly reverting to the 2.2% annual average we produced from 2009–2019, before the pandemic hit,” he tells us.

“The odds are good that economic growth will slow even more as government assistance ends. We’ll find out very soon.”

And even if the economy holds up all right, “there’s a global liquidity crisis fast emerging,” says Jim. “It’s not at the critical stage yet, but it’s getting close.

[Reminder: “Repo” is short for “repurchase agreement” — a type of overnight loan that Wall Street firms take out with each other to conduct their daily trades.]

“This has led to a desperate scramble for Treasury bills, which means capital flows from Europe and Asia into U.S. dollars in order to buy the bills. Astute investors see the crack-up coming and are running for the safe havens (dollars and gold) in advance.

“This dynamic will come to a head in late September as dealer banks start to window-dress their balance sheets for quarter-end reporting,” Jim goes on.

“Reduced leverage and the scramble for safe assets will exacerbate the liquidity crisis. This acute stage may pass safely (only to be repeated on Dec. 31, 2021), or it may erupt into highly volatile markets in October.

“Precise timing is difficult to forecast; foreseeing a credit crisis is not.”

Of course, gold stands to benefit in this scenario — whenever it unfolds.

But Jim is positioning readers of his Tactical Currency Profits service to cash in big from the rush into the dollar — to say nothing of other currency fluctuations around the globe.

Let Jim walk you through how COBRA works when you follow this link.

In the meantime, gold priced in dollars just went on sale again.

Stocks are a mixed bag, with the Nasdaq inching still higher into record territory at 15,379. But the S&P 500 is down a third of a percent to 4,519 and the Dow is down more than three-quarters of a percent or 280 points. Another 90 points and the Big Board will crack below 35,000.

Crypto has taken a hard spill in sympathy with gold; Bitcoin has tumbled in 12 hours from nearly $53,000 to under $46,000 — much of that drop coming after conventional markets opened on the U.S. East Coast.

Heckuva day for El Salvador to start using Bitcoin as legal tender alongside the dollar; the government went ahead with its plans without help from the International Monetary Fund. That said, the Salvadoran market is just large enough for a host of multinationals to go along… 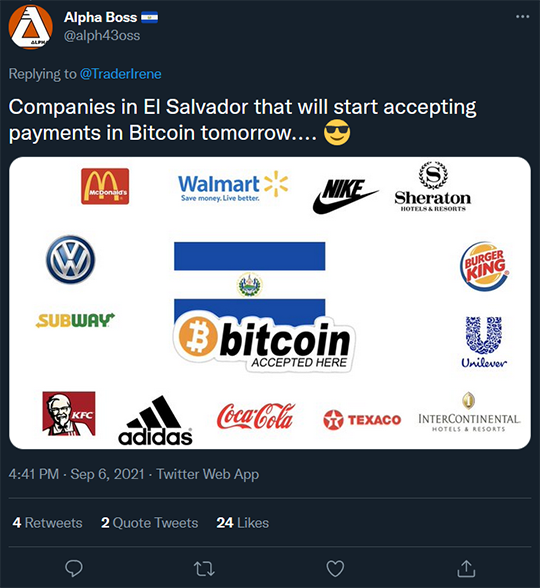 In the base metals space, copper is down 5 cents to $4.20 a pound. But aluminum has soared to 10-year highs after a coup in the west African nation of Guinea — a major producer of bauxite, one of the main components of aluminum. As if there weren’t already enough supply-chain snags to worry about…

With seven days to go before Apple’s release of the next iPhone, the rumor mill is getting cranked to 11.

“According to Bloomberg, this functionality will only be available in emergency situations… but the fact remains if the iPhone is built to directly connect to satellites, that is one more step toward Apple-Fi becoming a reality.”

As you might recall, “Apple-Fi” is the name Ray has given to a prospective satellite network that would supplement conventional cell towers.

“Apple has yet to comment on these rumors or their plans for internet from the stars,” he cautions. “But as I’ve said before, that doesn’t mean they aren’t working on it.

“Apple is known for keeping things hush-hush until it’s ready to launch,” Ray goes on.

“Remember, Apple has already hired dozens of individuals with expertise in satellites and aerospace technology.

“Apple-Fi is coming… but we probably won’t hear about it until Apple’s worked everything out from design and implementation to cost.”

Further evidence: “In November of last year, Apple announced they were going to use their new Apple M1 chip in the new-line Mac computers, effectively ending Apple’s 15-year reliance on Intel processors.

“Apple bringing their hardware in-house can only mean good things for Apple-Fi. The more control they take of their hardware, the more likely we are going to see Apple-Fi integration in future devices — like, as rumored, the new iPhone.” Stay tuned…

Meanwhile, for the record… Just before the holiday weekend, Apple quietly shelved its plans for a privacy-shredding update to iOS.

The plan was for forthcoming versions of iOS to scan the photos on your device if you uploaded them to iCloud, to see if they matched known images of child pornography.

Privacy advocates weren’t fooled by the “It’s for the children!” rationalizing; even the narrowest opening of a “back door” in Apple’s strong encryption protocols constitutes a fatal compromise that could be exploited by governments and hackers.

“These features would create an enormous danger to iPhone users’ privacy and security,” said the Electronic Frontier Foundation, “offering authoritarian governments a new mass surveillance system to spy on citizens.”

The backlash is enough to send Apple back to the drawing board — “to take additional time over the coming months to collect input and make improvements,” according to a company statement.

But EFF, among others, is pressing AAPL to drop the plans altogether. 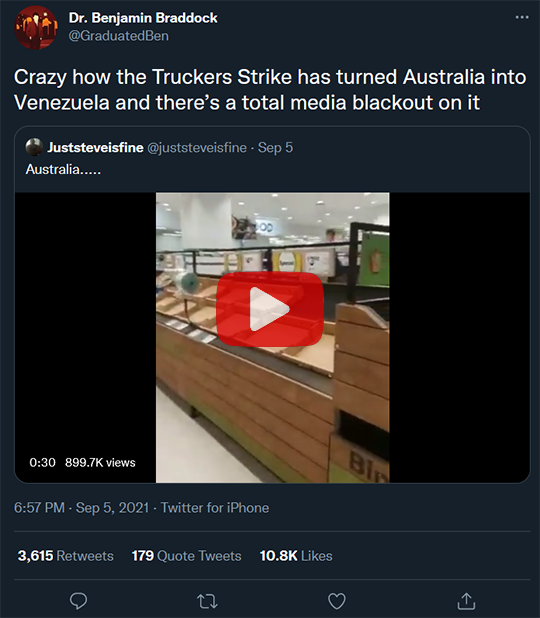 So we should back up a bit. There’s a truckers’ strike in Australia, to protest the insane pandemic-prevention practices there, which you might call “lockdowns on steroids.”

Last we heard, the strike was scheduled to begin last Tuesday. “It’s on. The truckies are doing it,” said a man on a Twitter video. “The truckies are going to shut down the country; what that means is you need to go shopping now, get what you can for the next week or two, load your fridge, freezers.”

Thing is, we have no idea if that video clip of empty shelves is from Australia in the last week or somewhere in the States more than a year ago. (Store displays are in English, they feature dollar signs and people are masked up — so it’s probably not Venezuela!)

The Aussie government has no desire to convey whether the strike is meeting its objective… and the corporate media both Down Under and elsewhere in the English-speaking world seem equally uninterested.

As one online post said, “They have blocked all truckies communications and all their social media and phones and taken every thread off social media to think they didnt blockaid!” [sic]

Is that true? We have no idea. In the absence of authoritative reporting, all we have are random videos and posts with which to stitch together a narrative that may or may not be accurate. (“Clips and rushes come from who knows where,” as Asia wrote in their best song, the spooky-dystopian “Wildest Dreams.”)

But on the theory that where there’s smoke there might be fire… we thought it was worth passing along.

Meanwhile, the following from France seems more authoritative, since it’s the respected Johns Hopkins economist Steve Hanke putting his reputation on the line… 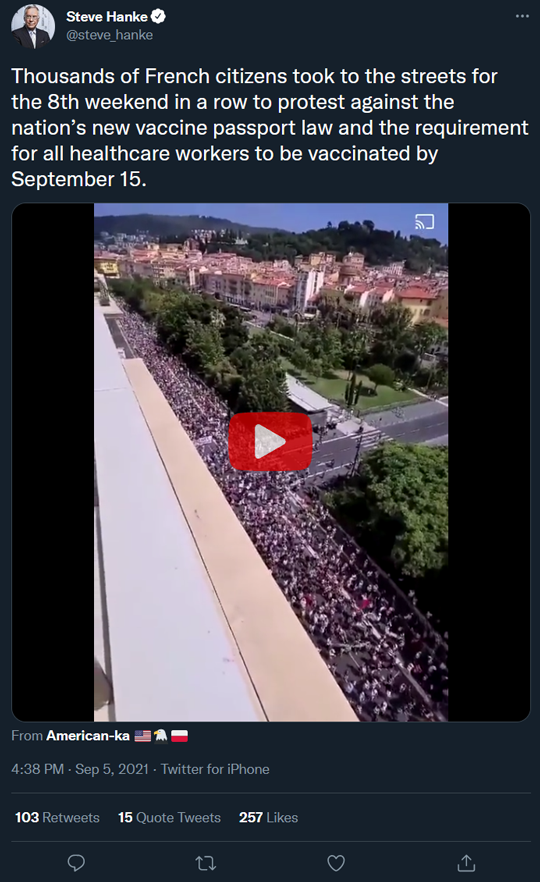 Not that you see much about that from corporate Western media, either…

“Assange really did a service for freedom of speech,” a reader writes after we took up the cause of the WikiLeaks founder again last week. “The fact is journalists should have been the ones who found and reported it.

“Journalists used to protect our freedoms; now most of our freedoms are lost. Why didn’t journalists and the media find out and report what Assange reported? Was any of it untrue? Why wouldn’t it be freedom to know the truth?”

The 5: In retrospect, the early and mid-’70s were an outlier amidst an ongoing 75-year collaboration between the media and the deep state.

The zeitgeist back then was a universal, trans-partisan revulsion with Big Government and all the institutions that brought about Vietnam and Watergate. Heck, for a few weeks or months, it even seemed as if the Church Committee might rein in the excesses of the CIA and other deep-state agencies.

The media, seeing the writing on the wall, actually took on an adversarial role — if only for a while. (Carl Bernstein chronicled the early decades of media-deep state cooperation in a famous Rolling Stone piece from 1977.)

Ironically, it was Ronald Reagan — the guy who swept into office declaring “government is the problem” — who wound up restoring Americans’ faith in government by the time he left office.

More about that later in the week… because it ultimately ties in to the Sept. 11 attacks, whose 20th anniversary approaches on Saturday.